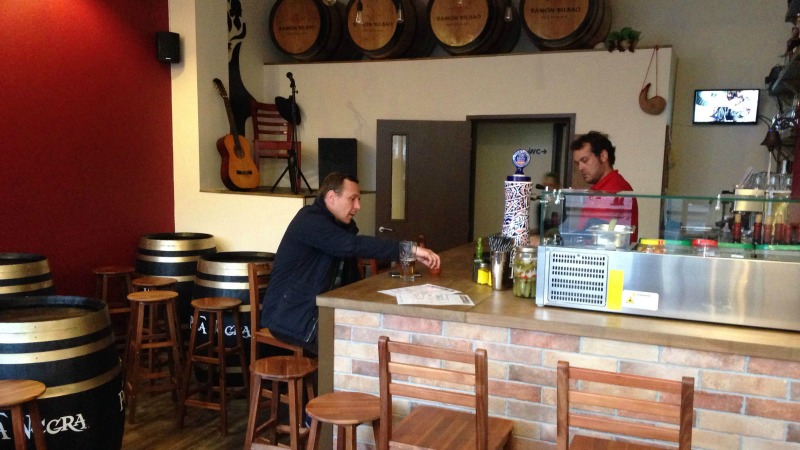 Sherry barrels scattered around Barrika being used as tables make it look like the start of a World’s Strongest Man competition.

Along with the painting of a flamenco dancer in one corner of the ground floor bar and a huge stick-on photograph of a glass of red wine being poured, it’s the kind of touches that scream that this is a Proper Spanish Tapas Bar – thus losing a little bit of the qualities that make up the essence of a proper Spanish tapas bar.

Barrika – next door to No. 25A – has a panoramic view of Old Market

The Spanish voices, Estrella Galicia on tap and general feel of conviviality and informality should give the game away, as will the flamenco guitarist and dancer planned for future Saturday evenings, with flamenco on the stereo on a recent Friday night.

A trio of women – one with lipstick in the style of Candice from The Great British Bake Off – huddled together in a window seat overlooking the Old Market Street bus terminus, planning their weekend over large glasses of Rioja wine.

As a man nursed a pint alone at the bar while waiting for a friend, a brother and sister duo walked in and promptly practised their Spanish while ordering a selection of tapas.

Choices here include a good tortilla (£2.20), piqauante patatas bravas (£3.80) and serrano ham (£2.70), with more formal dining on tables in the restaurant downstairs.

Larger dishes include paellas and plates of cured meats and cheese, with a glass of house red or white wine for £3.50 and a jug of sangria for £9.

Barrika wrongly attempts to be typically Spanish for a Bristol audience instead of simply resembling a bar found in the backstreets of Spain. A real Spanish bar would have pop music rather than flamenco on the stereo and a small television showing the football in one corner.

Regardless of its misguided attempts to create a stereotypical Iberian hangout, Barrika still deserves to be packed during evenings after work, punters shouting over the chatter as plates of tapas pile up on the barrels in front of them and they raise their hand to order one more beer from the bar.