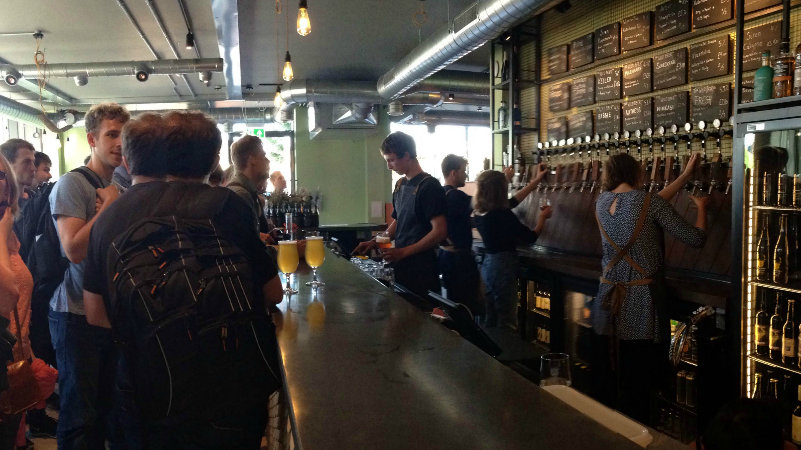 Wapping Wharf has swiftly become the main thoroughfare for those walking from Bedminster to the city centre and with the opening of Wild Beer’s new bar in a prime corner position nearest the Floating Harbour, there is yet another reason not just to pass through but to stop and part with your hard-earned cash in this brand new corner of town.

On Friday evening after work, less than half an hour after officially opening to the public after two nights of test runs, the beer drinkers of Bristol were already going wild for Wild Beer.

Those not fortunate enough to claim the dozen or so deckchairs outside had spilled out to sit on the steps next to the railway tracks more used these days to swallowing up and then spitting out cyclists than a route for trains.

Its views soon from one side of the L-shaped room – on one wall of which is an amazing mural by Ben Rothery of a sloth Poseidon and a rooster pirate captain riding a fish – will be the shipping containers of Cargo, with Bristol Cider Shop and Box-E Bristol so far confirmed as future neighbours.

At the bar, there were a lot of people just looking at what was on offer on tap here, with Wild Beer brews taking up half of the 21 kegs, and other positions occupied by local ales from the likes of Wiper & True and Arbor, alongside some from further afield including the Chorlton Brewing Company from Manchester, Birrificio Del Ducato from Italy and Beerbliotek from Sweden with the wonderfully named Man Goes Crazy For Peaches.

And then there is the selection from Wild Beer, a brewery based near Evercreech in Somerset founded in 2012 by a pair of friends who met while working at Bristol Beer Factory and fancied going it alone. They opened their first bar in Cheltenham last year but have long been looking for a site in Bristol and were not able to turn down the opportunity for this prime location.

Some of their beers are also in cans in bottles, but here it’s all about the beers on tap, served in one-third, a half or two-third glasses and costing from £2.75 to £5.25.

The Millionaire has tasting notes of salted caramel and chocolate; the Smoke & Barrels Spring of cherrywood, smoke and rosemary; while at nine per cent the Nikasi (bubbles and apples and wild yeast) is so potent it’s only served in one-thirds.

If you have for some reason had enough of the beers here, there is cider from Orchard Pig, a few carefully chosen wines and bottles of whisky which include the splendid Classic Laddie from the Bruichladdich distillery on Islay.

Returning for lunch on Saturday, it was time to sample the food from Hook, who made a name for themselves as a simple market stall in Dublin around the same time as Wild Beer were starting up, before opening a restaurant in London’s trendy Camden Town and now Bristol.

Fish and chips here are far from traditional, the fish cooked in either crispy panko breadcrumbs (£10) or in a light tempura batter (£12), with the crisps salted with seaweed.

Panko breadcrumbs originated in Japan and are lighter, crispier and larger than their European counterparts. At Wild Beer, you can choose the fish to come with four different sauces, tartar, chipotle, chimichurri or lemon cajun.

While the panko had an acquired earthy taste, the other tempura option must have hardly been dipped in the batter and was all the better for it, with meaty flakes in turn able to be dipped into a lively piri piri and lime sauce.

It’s not just fish and chips here either. A delicate ceviche (£6) saw a sea bream with Wild Beer ale added to the chilli, lemon juice and lime juice; with other highlights on the snacks menu gin-cured salmon; and the cheese board featuring cheese made in a dairy mere metres away from the Wild Beer brewery.

Wild Beer and Hook is a match made in heaven, in a bar that seems heaven sent.

Read more: Bristol to get first restaurant in containers