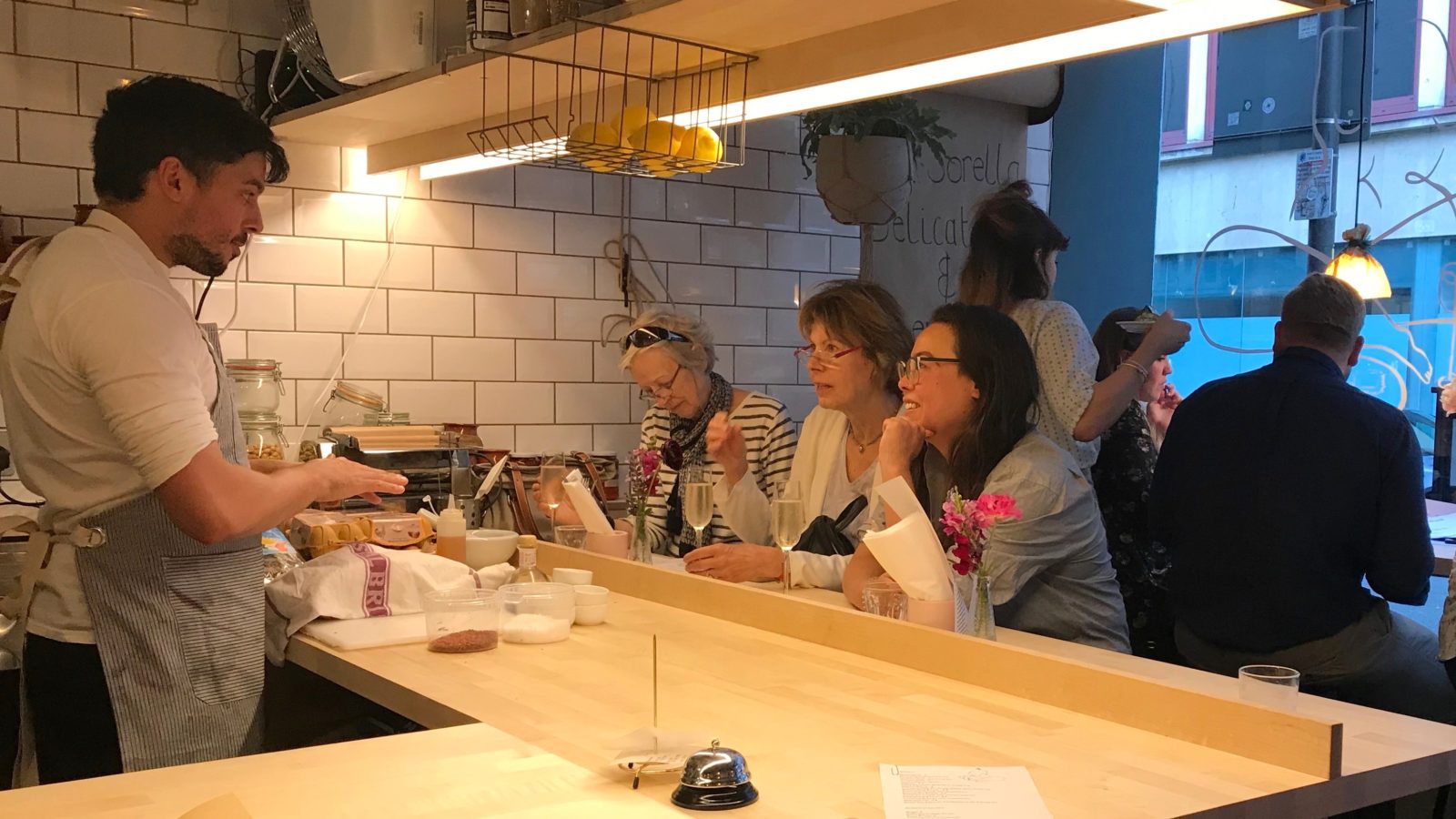 “This is sexy isn’t it?” said one customer wearing a leopard print jacket and towering black platform shoes as she walked through the door of La Sorella on Thursday evening.

La Sorella on St Stephen’s Street is the third business to be opened by Ben Harvey and Dom Borel, the cousins behind the runaway success stories of restaurants Pasta Loco on Cotham Hill and Pasta Ripiena just a couple of doors down from here.

‘Delicatessen & aperitivo bar’ is written on brown parcel paper hanging on one wall here, so it would have been remiss not to try both sides to this business out. 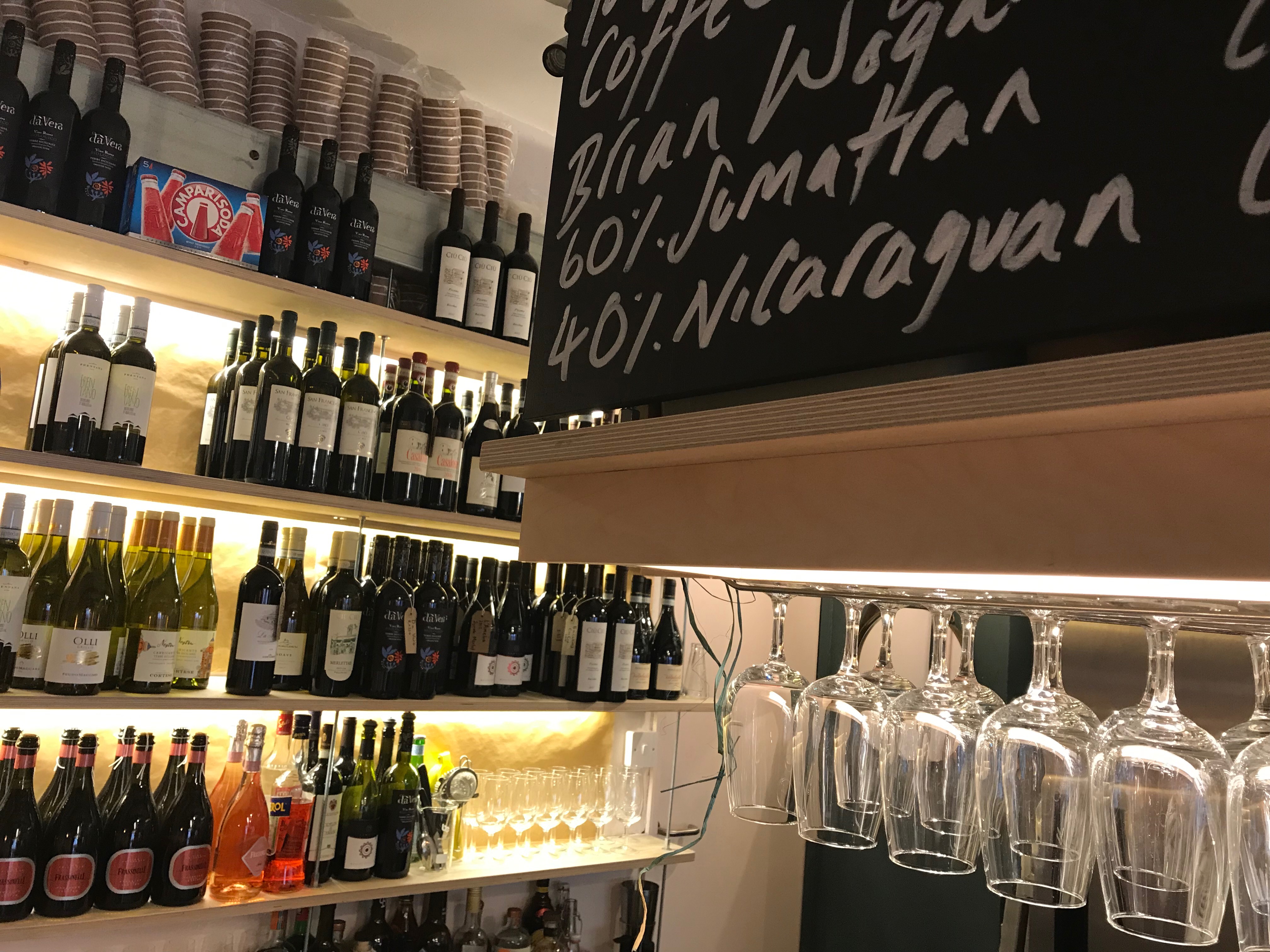 Wines and coffee sit side by side at La Sorella

Soon after 7.30pm on Thursday, some half a dozen new arrivals turned what until then had been a relaxed bar into a burst of activity.

Almost everyone seemed to be known by either Ben’s brother Joe in the open kitchen that takes up half the space here in a compact room, or manager Ruth Bolton, whose eye for detail has transformed this former Vietnamese-style cafe.

It’s an incredibly welcoming space, with 20 people able to be squeezed in at a pinch, all sitting on stools, either at the window, or at the bar, or on tables for two along one wall, beneath shelves holding the deli items such as olive oil, balsamic vinegar, baby plum tomatoes and cannellini beans.

Aperitivos range in price from £5 to £8, with options including negronis, G&T and their version of afternoon tea made with Belsazar rose, Bulldog gin, Chari Mate ice tea and mint.

A negroni bianco made with Psychopomp’s Woden gin came garnished with an orange twist, while for £10 you can have a choice of three options from the meat and cheese selection – including Tuscan prosciutto and finocchiona among the meats, and gorgonzola dolce and robiola among the cheeses. 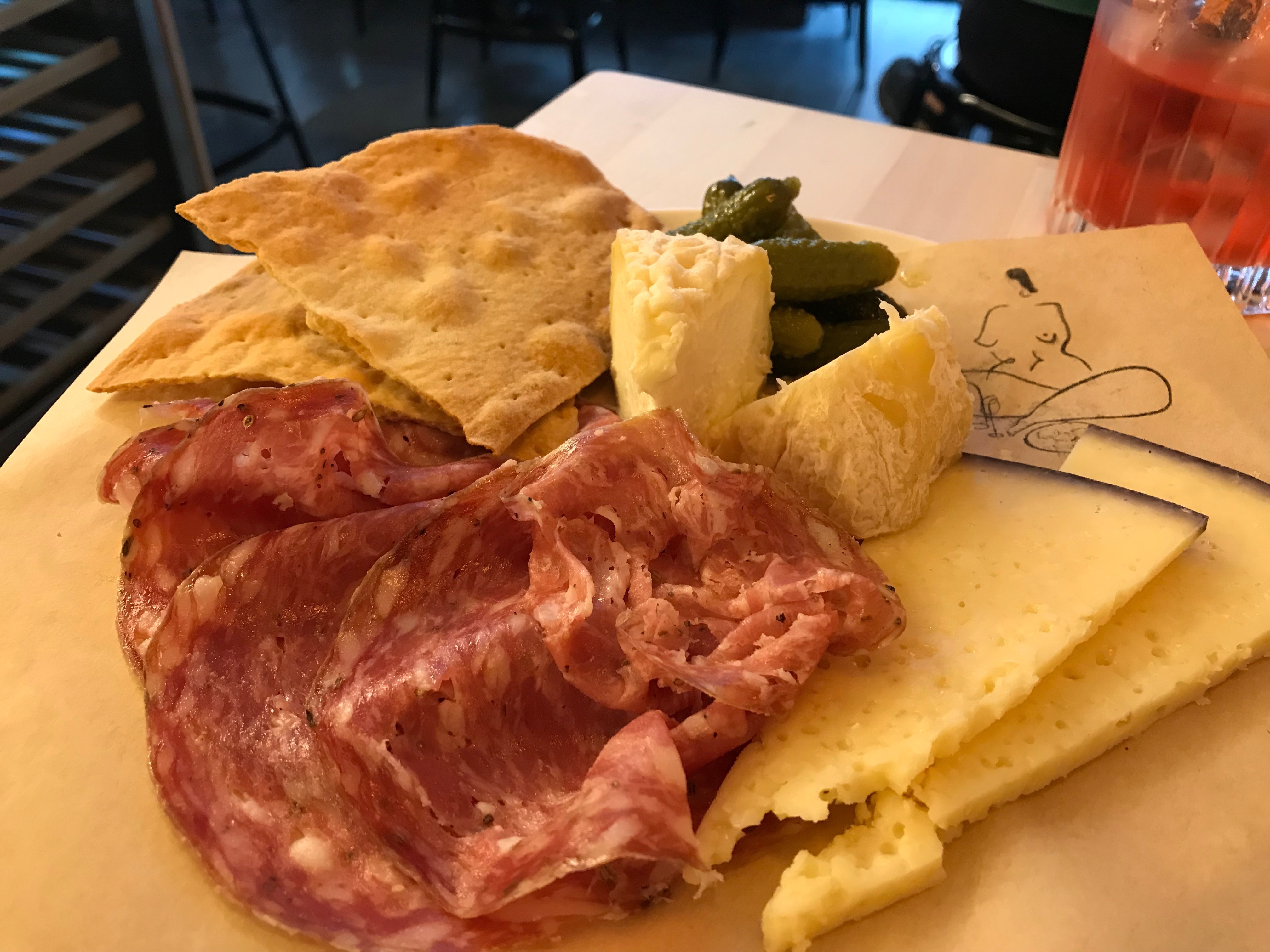 A selection of the meats and cheeses at La Sorella

The following morning, the meats and cheeses on the counter had been replaced by pastries, tarts and cakes cooked by in-house baker Frankie, who has been with the Loco team since the start.

A panettone – toasted, buttered and dusted with icing sugar – was a thing of beauty, accompanied by a well-made cortado with a house blend from Brian Wogan.

It was followed by a slice of the chocolate, rosewater and pistachio torte, served with a dollop of yogurt. There are not many starts to the day better than this; and with a chocolate and orange panettone promised soon, I now have a new breakfast favourite. 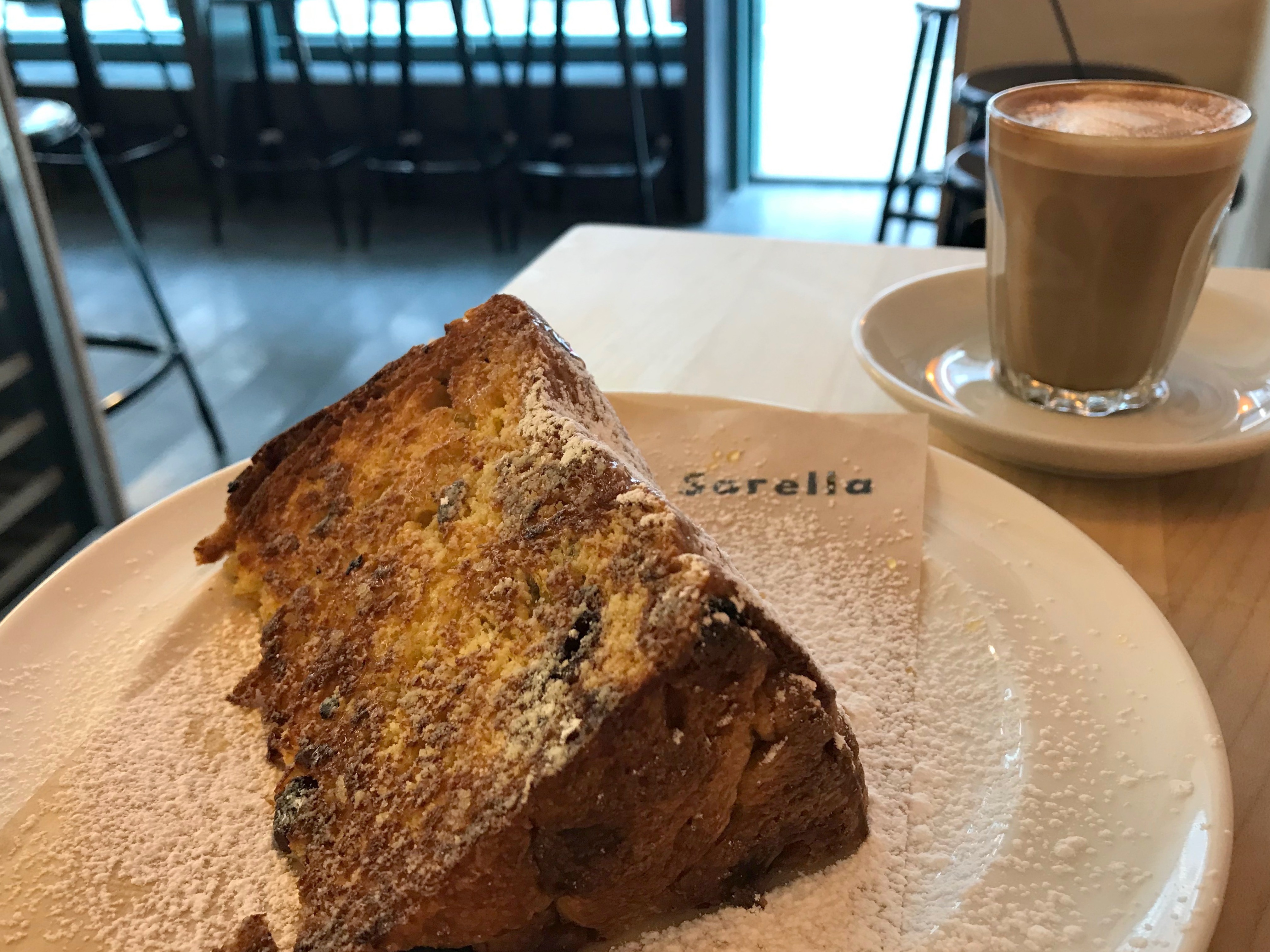 Panettone at La Sorella is recommended served toasted and buttered

On the counter, four trays of focaccia were ready to be put in the oven, as a new wine delivery arrived, collected by Ruth – ready for more nocturnal fun times ahead.

Come for breakfast and stay for lunch, dinner and drinks if you really want to to things properly. Or pop in before or after a trip to a nearby restaurant. What this place becomes is bound to develop over time.

La Sorella is as sexy as they come: a cafe, deli and bar already with its own distinct personality. 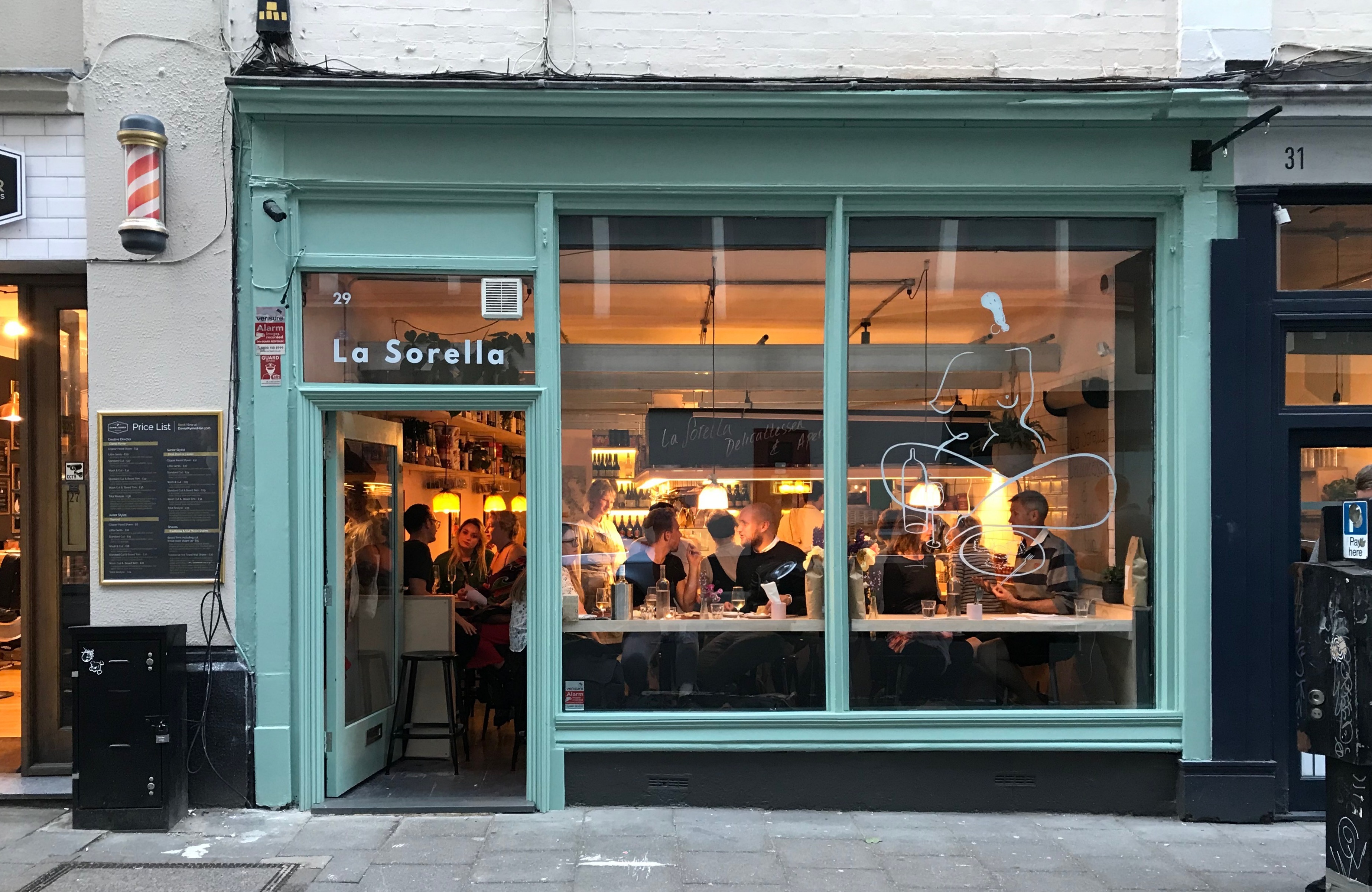