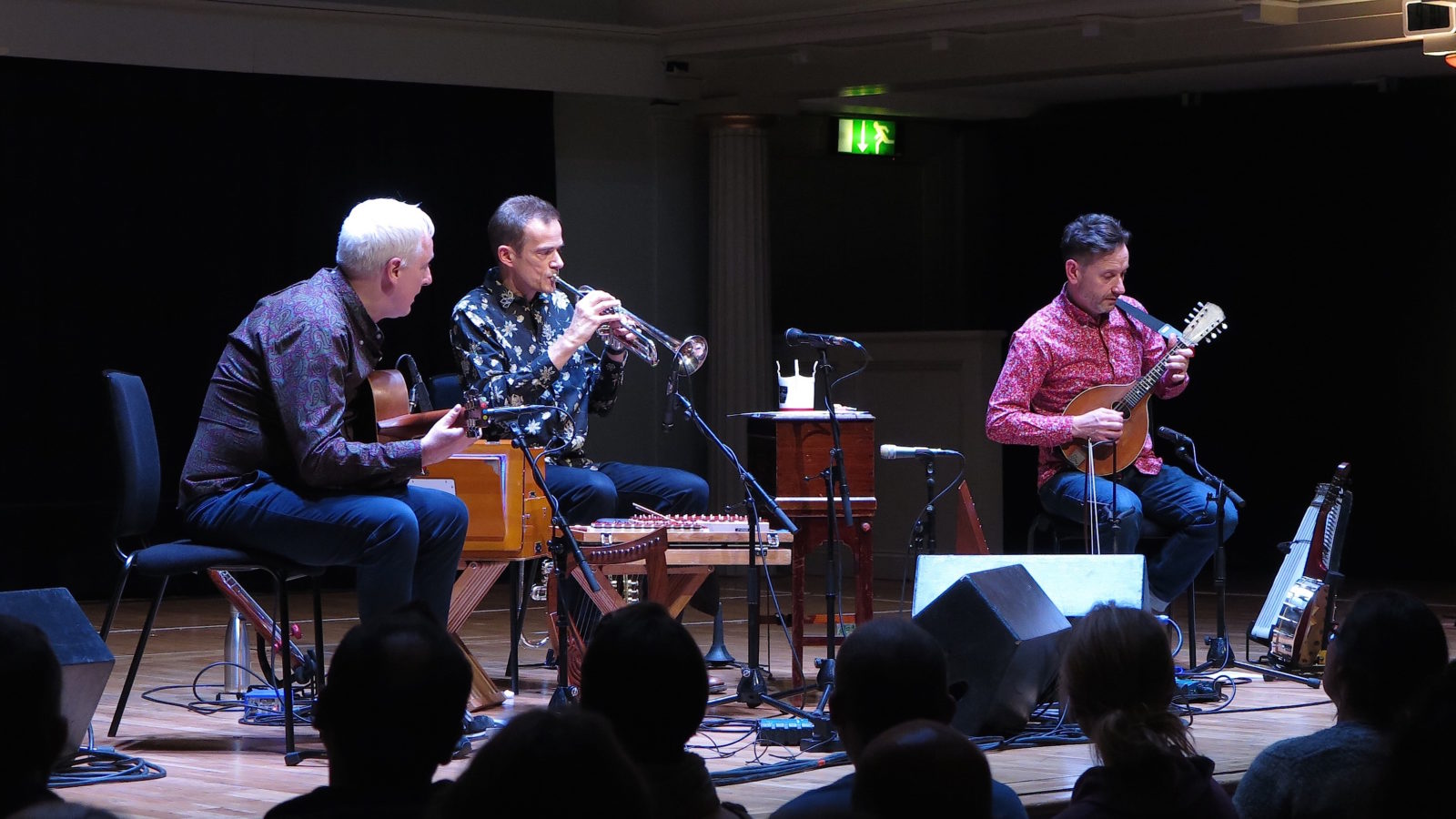 St George’s is a splendid concert (as opposed to gig) venue and some music suits the more formal ethos of a concert better than others. In return for formality and restraint an audience is rewarded with music that warrants close attention, while performers are gifted a reliably attentive audience. For string quartet Methera and multi-instrumental acoustic trio Three Cane Whale the hall was the perfect setting. 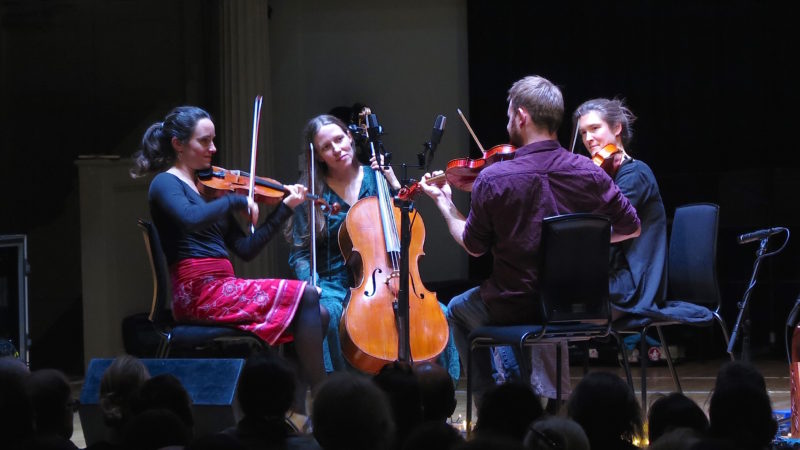 Methera’s was an unusual set-up for the St George’s stage – four chairs arranged in a small circle around a pair of microphones – but it cleverly placed the band halfway between a formal string quartet and a bar-room folk session. Sitting facing inwards the four players constantly exchanged glances and gleeful smiles as their intricately arranged folk music unfolded, a mixture of original and traditional British tunes. Their playing was meticulous and precise yet always infused with a dancing energy that often felt playful despite its technical clarity. 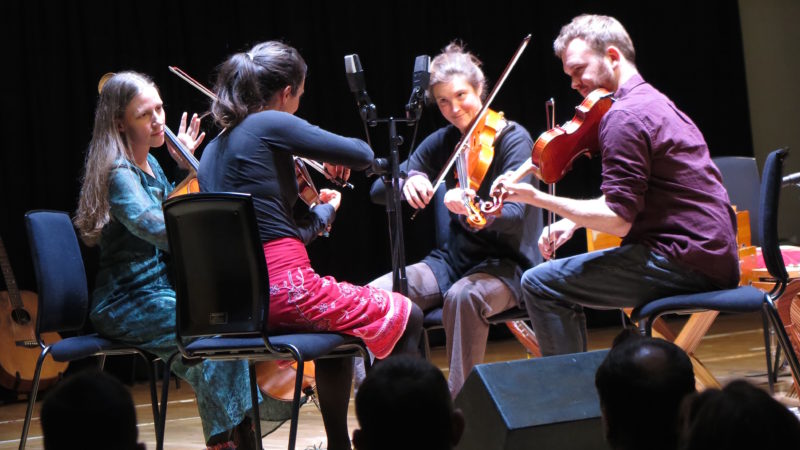 When the full range of sound was deployed from Lucy Deakin’s rich cello and Miranda Rutter’s viola to the high-dancing fiddles of Emma Reid and Sam Sweeney there was power to the music that exceeded their numbers. Tunes like the 3/2 Hornpipes thickened into something orchestral, while the Fox and Blackbird medley shifted textures from a wistfully Anglo-Oriental tune through a pizzicato bridge to the chugging dance beat interspersed with sweeping passages. Given the structural complexity of the pieces it was especially impressive that Stroud fiddler Sam Sweeney was sitting in for regular member John Dipper, so tight and flawless were the performances. 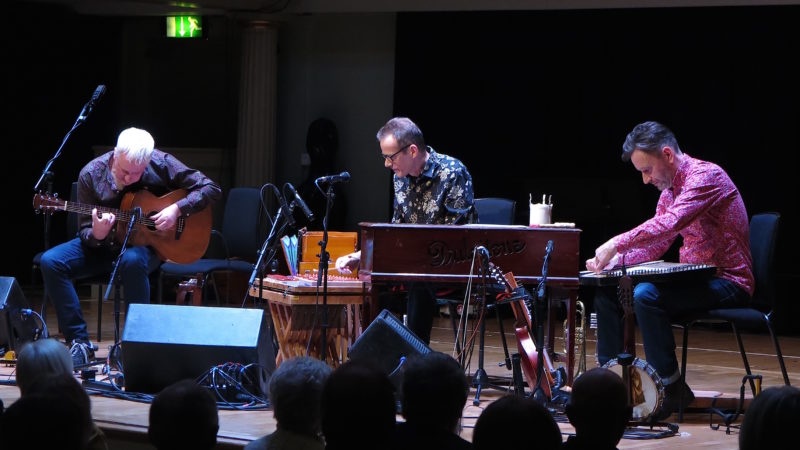 But when it comes to structural complexity Three Cane Whale take the biscuit, really. Their original pieces are riddled with complex rhythms, mood shifts and instrumental vagaries strung together through an internal logic all their own. They draw their inspiration from odd corners of the British landscape, apparently wandering the country like musical water diviners to sit in fields, woods, ancient churches or, in the case of new mini-album 303, a Somerset tea room. The resulting tunes can be the merest snippets or elaborate suites, so that even a 33 minute collection like 303 contains 12 tunes, to all of which we were treated once we’d been settled down with a couple of old favourites. 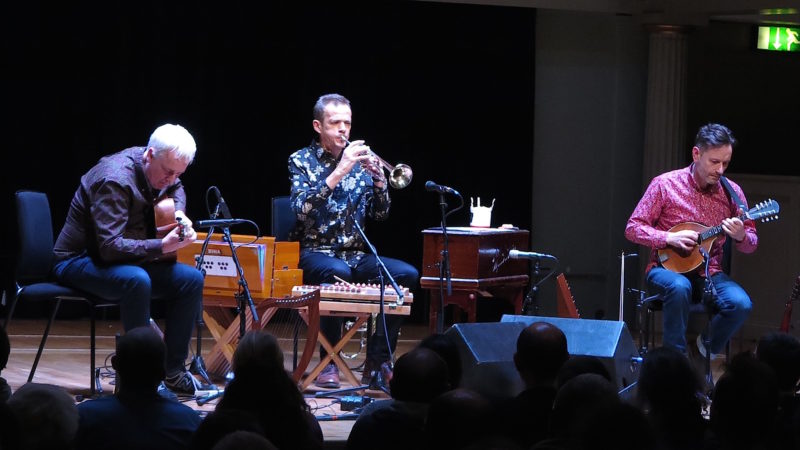 It began with a quiet field recording of the band’s steps on a stone path through a creaking gate leading to a meditative mandolin moment from Alex Vann. That was itself a prologue to the brisk opening of Island of Apples, a seven-time tune carried by Pete Judge’s muted trumpet, propelled by Paul Bradley’s rhythm guitar. The freshness of that piece was a reassurance that, after four albums, Three Cane Whale’s collective imagination is far from exhausted – though there were especial smiles around the audience when the  familiar Blackthorne Spring emerged a little later. 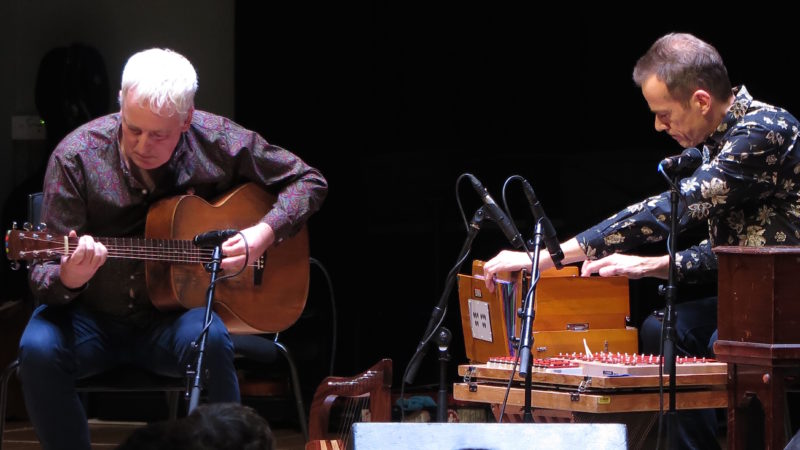 The trio drew upon their usual collection of unusual acoustic instruments, from the bell-like Dulcitone to a range of small harps and the ethereal sound of Alex Vann’s bowed psaltery. The various combinations of these gave the pieces character, of course, but it was good that each player had a moment to shine on their primary instrument, too. Paul Bradley’s reflective guitar solo Deadman’s Hill was a carefully constructed lullaby with a harmonic sting in its tail, while Pete Judge’s flugelhorn voluntary The Lost Travellers Dream Under The Hill signed off the new collection with a rueful farewell. 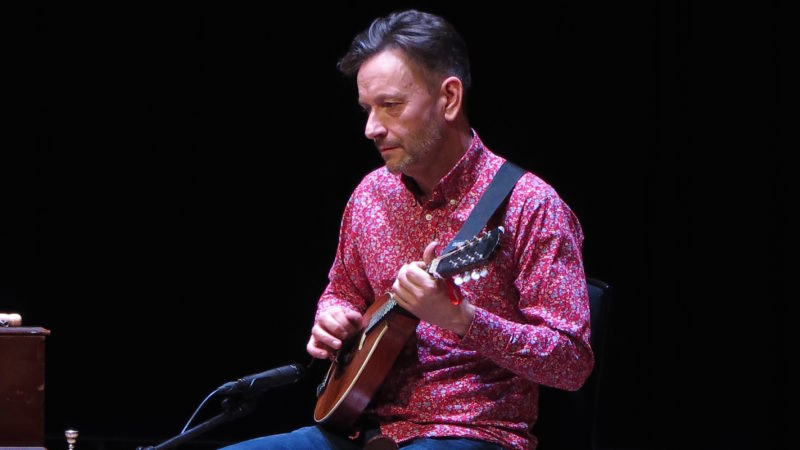 Alex Vann’s mandolin showpiece gave a new precision to the term site specific, being named SS 91089 04944 after the grid reference of the place where it was conceived and recorded. It gave a welcome chance to fully appreciate Alex’ virtuosity on the instrument as his unfeasibly rapid plectrum somehow elicited a three part arrangement that grew and flew on its way. He must surely be recognised as one of the best mandolinists in the English folk world . 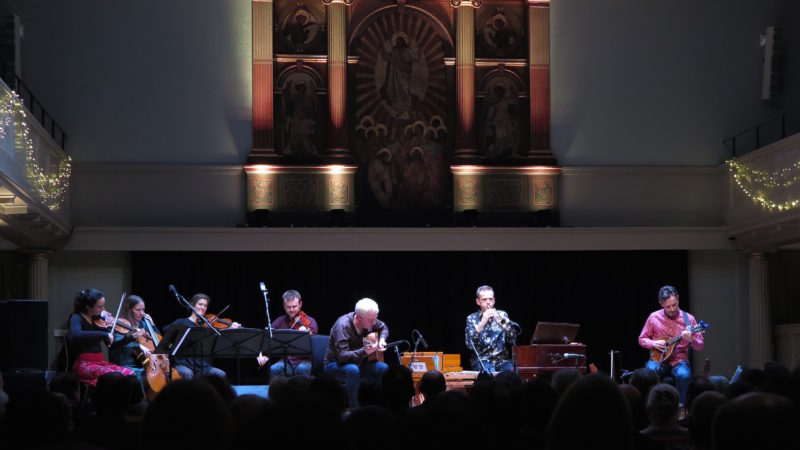 Encores notwithstanding, they rounded off the evening with Methara joining them for a couple of tunes. This wasn’t the classic ‘folky jam’, naturally, but specially arranged versions of Gospel Pass and Moon In A Bottle that properly integrated the sound of the two bands. The string quartet added swooping chords, thickening the sound before rippling away with the mandolin arpeggios, or added their pizzicato to the paired harps of Paul and Pete. The result was a thrilling orchestral sound that hopefully will prompt further exploration, but for the time being it was enough to know that Three Cane Whale are still finding the hidden music of our green and pleasant land.