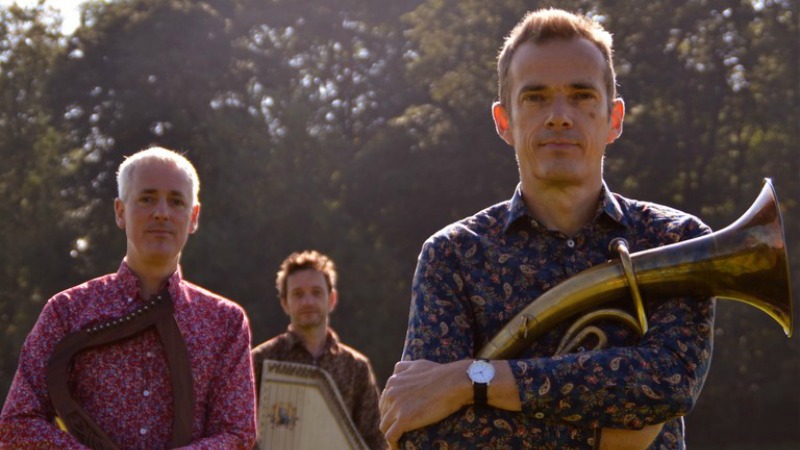 Three months on from their audio-visual show at St George’s, Three Cane Whale are back with another hometown performance at the Wardrobe.

This trio of ‘chamber minimalists’ have earned widespread praise for the intricacy of their music that’s full of evocations of nature and rurality.

Three studio albums and a live album have deservedly earned them national accolades and their multi-instrumental musicianship is hard to fault. Tonight, just as at St George’s, following a first passage of hesitantly delicate folky moods complete with the odd bum note, their true colours really come to the fore with a melding of sound and vision in the second half.

While spokesperson, brass and harmonium player (amongst other things) Pete Judge’s assertion at the outset that they would ‘blow ourselves off the stage’ in the first set doesn’t quite come off, ‘the bringing in of the cavalry’ in the second goes to plan.

The cavalry here are collaborations with thirteen filmmakers to provide uniquely esoteric soundtracks to each short piece of film. The result is a kaleidoscope of gently atmospheric sounds from the quirky to the beautifully emotional coupled with images of natural innovation and strangeness.

With a varied selection of shorts from innovative talents such as Portishead and Noel Gallagher collaborator John Minton (who operates the projector tonight), BAFTA-winning Bristol animator Emma Lazenby, award-winning director Brett Harvey and others, there’s fertile ground on which to sculpt a meticulous interweaving of sound.

Paul Bradley’s upside down left-handed guitar playing entwines with the mandolin, bouzouki, bowed psaltery et al of Alex Vann and the brass-band feel of Judge’s trumpet, cornet and flugelhorn, with their other instruments brought into the fray to create the blissful and the baffling.

There are moments, such as the warm brassy upfull jazz of Dancing Ledge and the joyous depths of Moon In A Bottle where we’re lifted and lost in the collusion of music and movie and it works perfectly. During other bits we’re nearly there but not quite.