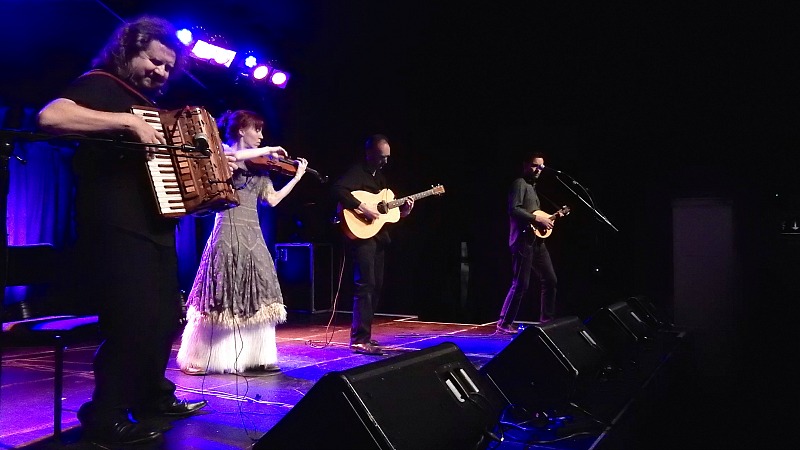 The Lantern Sunday May 31

As the Lauland weekend drew to its close the Colston Hall had that friendly easiness of a festival community and The Lantern was respectably full for its last Lau-led gig. After such a satisfyingly rich diet of Nu Folk, Alt Folk and Psych Folk opening act Rayna Gellert was an equally pleasing reminder of the joys of pure unadulterated American roots music. A devastatingly skilled fiddler in the old-time style she played tunes gathered from the music’s past, written by players like Uncle William Bunt and Uncle Dave Macon.

Her intricate rendition of The Girl I left Behind Me was a lovely example of how English traditions fed into the American repertoire to become something almost unrecognisable, while a sleazy version of Black Eyed Susan had a Louisiana gumbo flavour via the Blue Ridge Mountains. By contrast there was a simple clarity to her rendition of Gospel songs like Long Time Travelling with Jeff Keith’s mandolin and light-touch harmony vocals nicely judged, and when Lau’s Kris Drever popped by he added some fine guitar to the wry ballad 1845.

Though very much a local band Spiro came to Lauland as part of a tour of Europe and Canada on the back of  new Real World CD Welcome Joy and Welcome Sorrow. Their distinctive take on English folk as the root for highly structured acoustic music made them a natural choice for this programme. The subtly layered opening of new number I Am The Blaze gave an element of surprise to the bursts of rhythmic energy that punctuated the tune, a statement of how the band has evolved their approach without losing the important stuff, and the set unfolded a thoroughly entertaining combination of the new and the well-loved.

All the players are miraculously able to sustain two musical lines at once – not so hard for Jason Sparkes on accordion, perhaps, but a real feat for Alex Vann (mandolin) and Jane Harbour (violin) while Jon Hunt has rigged his acoustic guitar with an extra microphone to bring a more distinct bass line into the sound. Thanks to their skills – and Jane’s relentlessly fluent bowing across four strings surely deserves to become a recognised style of playing in its own right – this resulted in up to eight separate parts from the four players, creating a musical complexity that could be hard to follow but was a joy to hear.

As ever their physical presentation was more rock venue than concert hall – Alex prowling about, confronting the others in turn, Jane swooping and stalking (the effect heightened by her remarkable shaman-cum-bridesmaid dress), the band forming and reforming just as the music moved through its changes. It’s always been an important visual element that lifts the experience from what could have seemed a fairly static chamber concert into a live music event.

A final medley of I Fear You Just As I Fear Ghosts with new track Burning Bridge brought everything together, the former’s swooping melody and choppy rhythm coming to an elegiac pause before the latter’s triumphant outburst, the piece patiently notching up note by note to a fitting climax. On this showing of new material it’s clear they haven’t actually burned any bridges, happily, but have further consolidated their very individual fusion of traditional folk themes, systems music and proper job rock abandon – a unique recipe for well-deserved success.