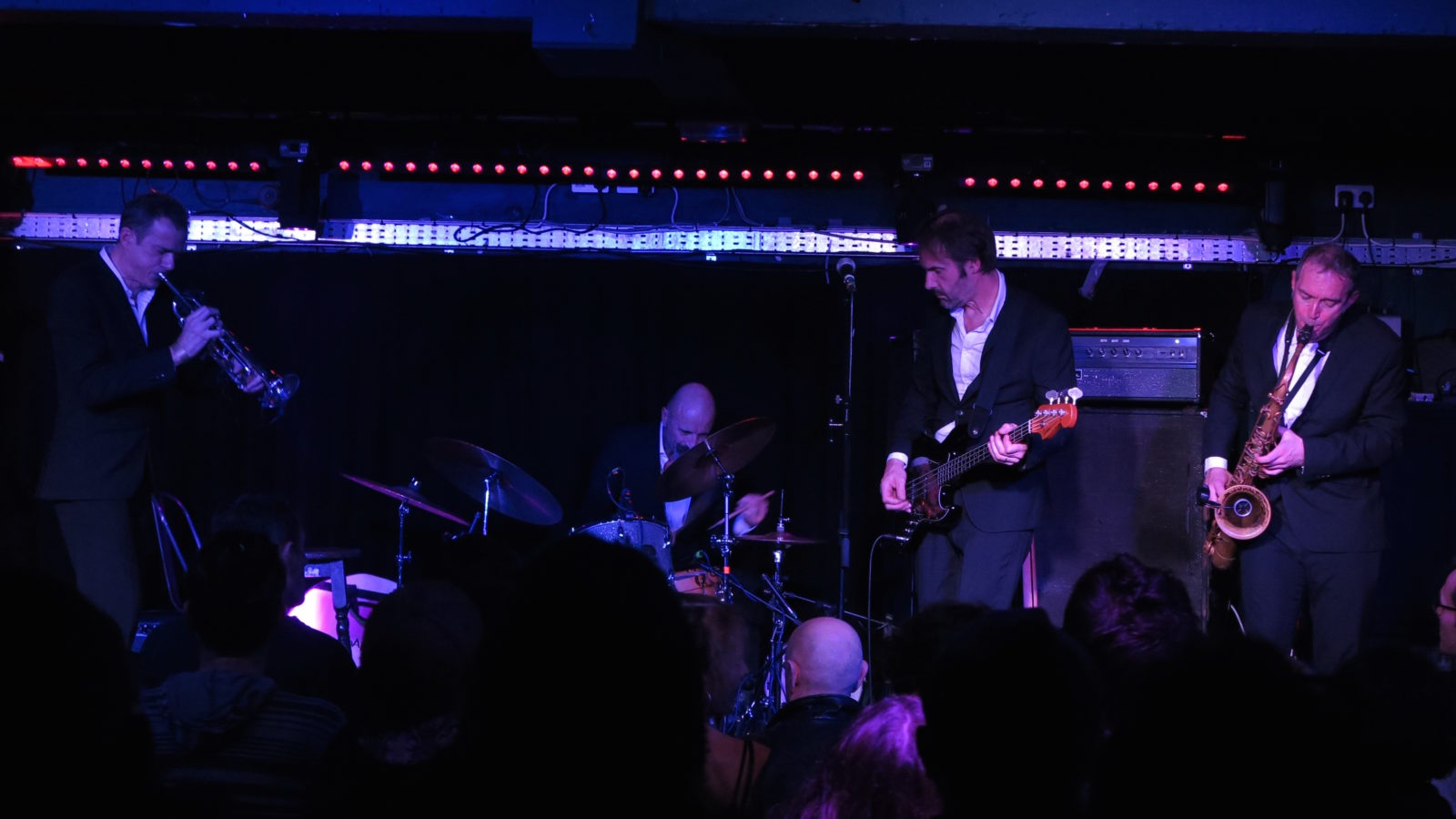 Their twentieth anniversary as a band may have been a slender pretext for a party but, to judge by the rammed crowd, it seemed that Bristol’s seminal jazz-rock quartet Get The Blessing certainly knew how to pull ‘em in. And who even knew that seminal folk-rockers This Is The Kit would be on the bill, let alone Serbian ambient jazz outfit EYOT? But then again, given GTB’s big standing across the European jazz network and their shared local hero status with TITK there was always the confidence that their promised ‘very special guests’ would indeed turn out to be just that. 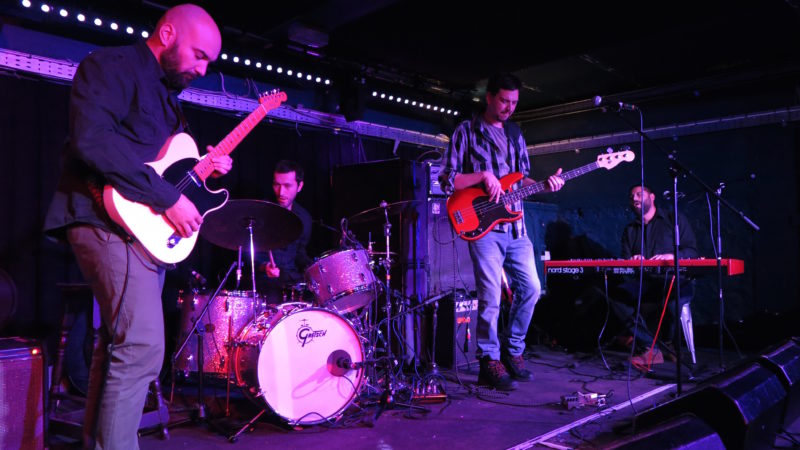 And what a party it was, beginning with EYOT’s slow, looping bass and drums behind a slowly evolving piano hook that eventually teased a Theremin-like wailing riposte from the guitarist. As with all of their tunes (drawn from a back catalogue of five albums) the music slipped effortlessly across elusive time signatures, combining solid groove with soaring lyrical moments. It was disciplined stuff, like The Necks covering Massive Attack, the plangent piano hanging in the air as bass and drums colluded, the sudden guitar reminding of a rock lineage. 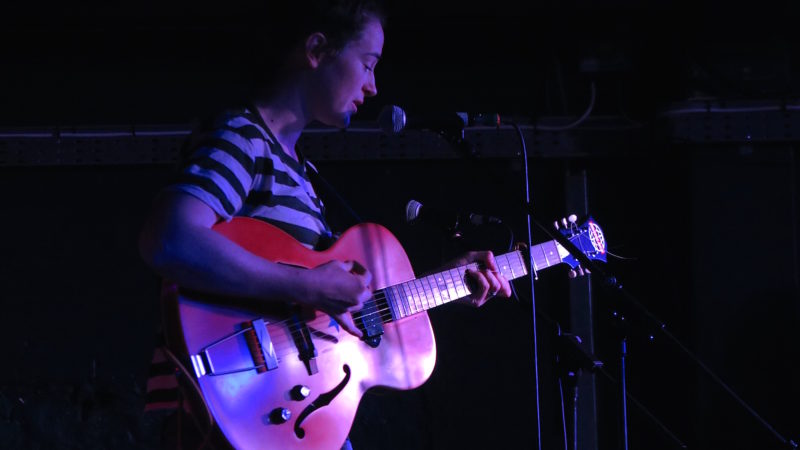 This Is The Kit’s Kate Stables

EYOT’s music might well have run nicely into our hosts’ set but, ever the surrealists, they treated us instead to the glorious and wise whimsy of This Is The Kit. These days stripped down to a four-piece, the core elements are still very present and correct, namely the affecting vocal interplay between Kate Stables and Rozi Plain, the shifting clarity of the rhythm section with Jamie Whitby-Coles on drums and Neil Smith’s perfectly judged guitar adding atmosphere and style whenever it emerged. Of course it’s all about Kate’s songs, at heart, and the sustained artlessness of her natural voice combines with the elliptical and meaningful poetry of her lyrics in an essentially English way that recalls Robert Wyatt at his best. It made us all very happy, naturally, with newer numbers like Moonshine Freeze and Starting Up Again as good as any she’s written before. 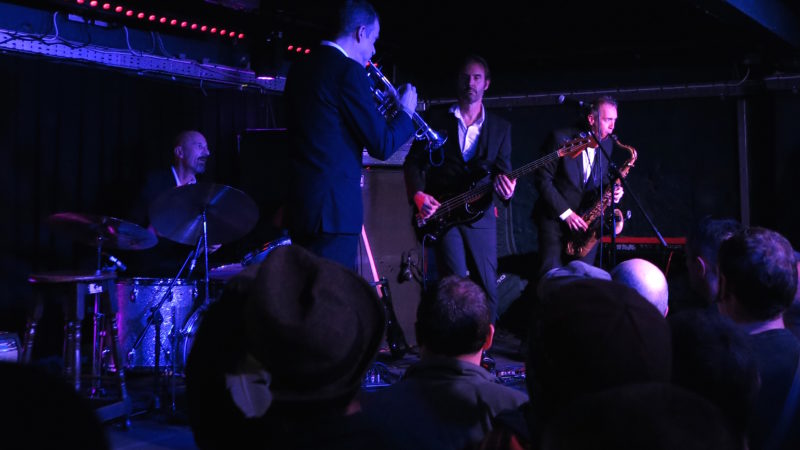 But, good as they were, it wasn’t for them the crowd had convened and it was with Get The Blessing’s first blast of Einstein Action Figure that the party really started. Whether playing tracks from their 2008 debut album All Is Yes or last year’s Bristopia the band’s unity of purpose and clarity of shared vision remains as powerful as ever, making danceable jazz that’s really jazz and really danceable. Their reference points go back way before the current crop of jazz excitement, reaching past modern dance music tropes to rock, prog and, above all, the free jazz fluidity of Ornette Coleman. Like that legendary musician they captured a real sense of making the music live in the moment as if they, too, are being swept away by their own creations. 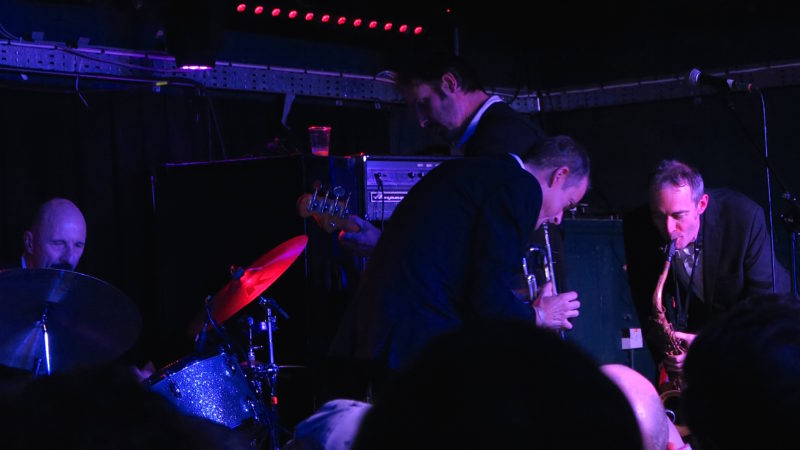 If we the audience were having a party then it looked as though they, on stage, were having an even better one. Jim Barr’s distinctively  thunderous bass riffs were hooked inextricably to Clive Deamer’s equally seismic drums but it was far from a mere onslaught as sudden shifts of speed and volume were thrown up by the permutating voices of Pete Judge’s explorative trumpet and Jake McMurchie’s excoriating tenor sax. Both horn players proved adept with electronics, carving semi-orchestral walls of sound from loops and effects only to be washed away by more lyrical solo lines or else reduced to stabbing out percussive repetitions. It all had a logic, naturally, and it all added up to the Get The Blessing sound that has made their international reputation – that, and the fact that they can really do it live. They may have been playing like this for twenty years but it felt like they’d only just got started. We, on the other hand, were well and truly blessed.