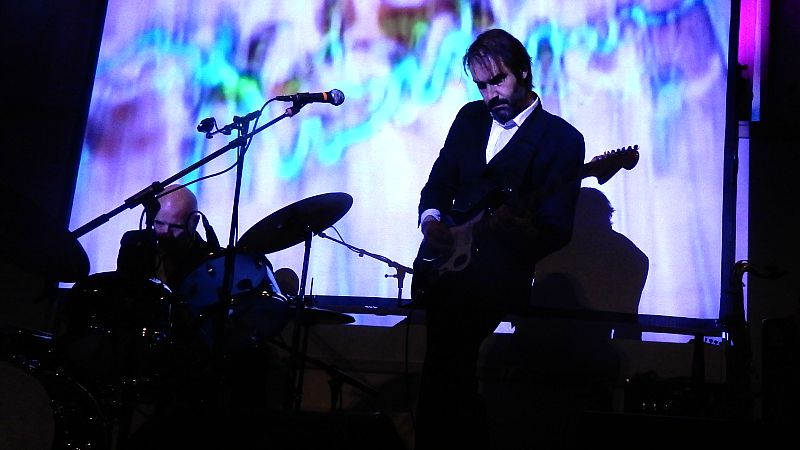 The promise of new material from Get The Blessing clearly has pulling power in this town, and the tickets for this album launch were sold out in advance. Anticipating surprises, the first one came on entering the Lantern and seeing the room refigured, with a big screen over a low stage against the side wall. It boded well, as did the choice of support act.

Formerly Sam Wisternoff’s solo project, SJ Esau is these days established as a duo with drummer Sean Talbot adding an explosive acoustic counterpart to the dazzling unpredictability of Sam’s electronic rock-pop songs. Playing in the shadows beneath the distracting artfulness of his own videos he manipulated voice, guitar and a table full of gizmos, looping and sampling, crashing through his own soundwalls like Sonic Youth invading a psych-folk concert, each song a complex construction of moods and textures. It’s relentlessly creative, throwing ideas from electronica, grunge, noise and psychedelia into well-judged collages, the drumming catching and restating the musical tone and giving it hard-edged emphasis. There was no doubting its fitness for the occasion and it got a real roar when it ended.

So follow that, Get The Blessing. And of course they did, starting with ‘something crunchy’ from the new album Astronautilus. Phaenomena delivered a portentous wall of sound with a recurring wail of a riff from Pete Judge’s heavily processed trumpet, and an increasingly vivid argument from Jake McMurchie on sax. Played out with a visceral drum and bass regime that scattered fancy touches over a crude slam beat it signposted a looser, loucher sound than previous albums and a welcome breadth of style. Similarly Hayk’s wistful insistence drifted into very cosmic territory, long unfolding horn lines stretched across a near-reggae drumbeat with Jim Barr switching to guitar and leaving an interesting space where the bass might have been. Combined with video artist John Minton’s projection of what must be the worst holiday slideshow ever it evoked the angry nostalgia of a regrettable childhood.

Pete Judge twiddles in the shadows

They played the album in its entirety, and though the more familiar swagger of Monkfish fitted the established GTB mould it was mostly a refreshed sound palette on display, with the horn players spending much time crouched over their pedal collections processing waves of unexpectedness into the mix. The stripped out minimalism of Sepia gave Clive Deamer only the lightest of touches on drums, contrasting with his proto-metal workout on Cornish Native – a rolling rock of a number surely destined to join past greatest hits like Pentopia and OCDC both of which followed as a sort-of encore that pulled whoops of recognition from an audience well stocked with undisguised fandom. To judge by their overall response it would seem that the band have pulled off the neat challenge of making something new that both pleases them and still keeps their followers happy: on the weekend that welcomed a new leader to the Labour Party it’ll be interesting to see if he manages the same thing.