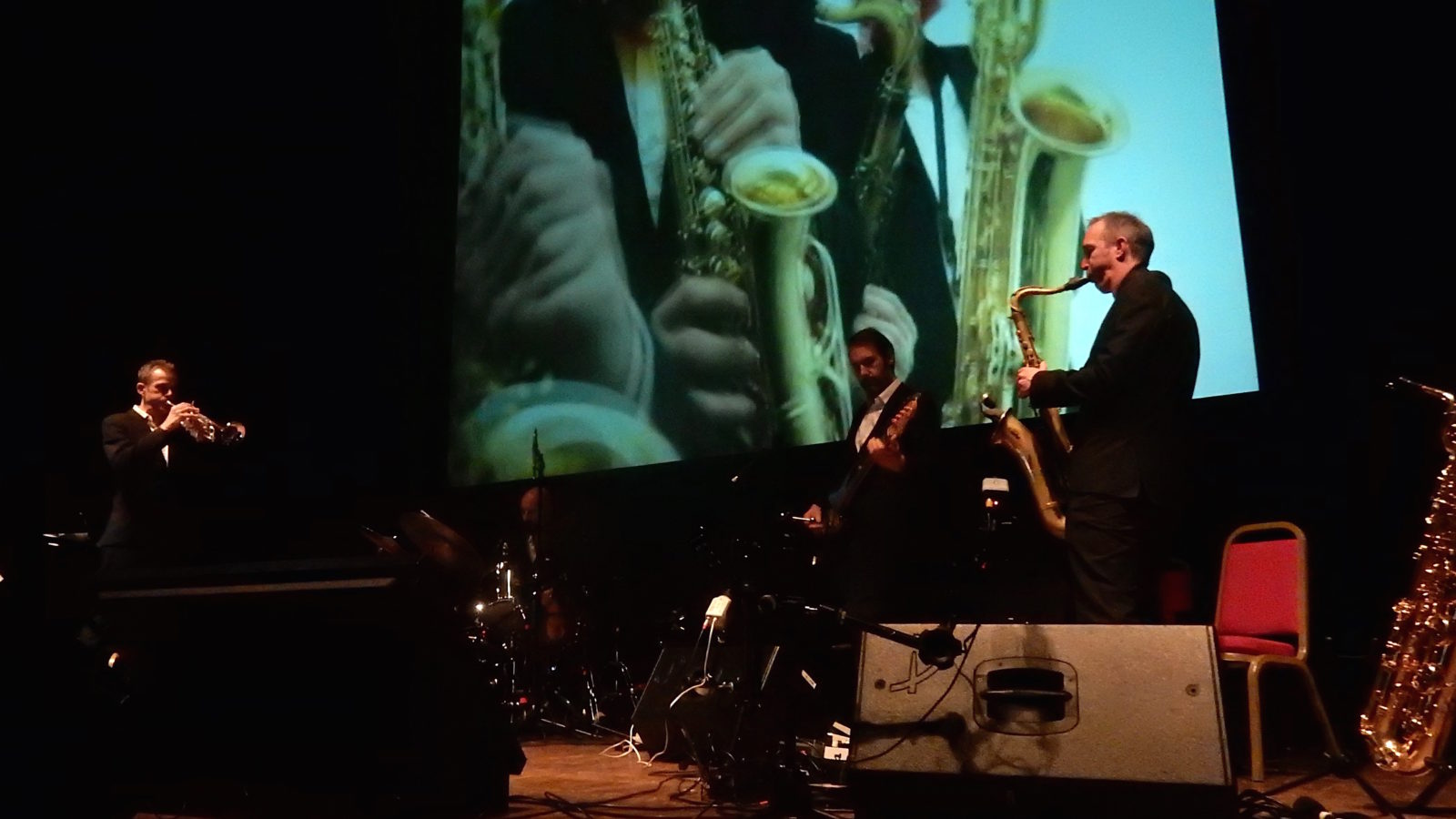 And here we go … it was the opening night of the 6th Bristol International Jazz and Blues Festival and already there was some serious congestion around the free stage in the Colston Hall Foyer. A powerhouse performance by the Bristol University Jazz Orchestra was followed by the laid back loucheness of Kevin Figes ‘library music’ project Underscore, a loungeworthy set of incidental music from forgotten films and TV shows coolly delivered without irony. The latter made an excellent introduction to Bristopolis, a specially commissioned film by John Minton with live soundtracking from Get The Blessing that was the main hall show for the evening. 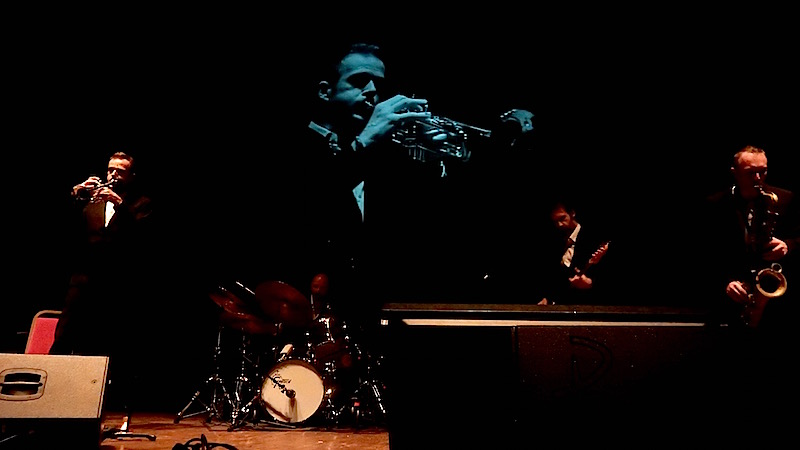 Get The Blessing’s Pete Judge (left) overshadows himself

The event was staged as a retro ‘night at the pictures’, with a collage of old-school newsreel clips providing a Pathé-style opening before the band slipped onstage to perform to a couple of Minton’s early promotional videos which first established their distinctive visual image. The flashing on-screen disjunctures of Bleach Cakes merged with real-time live footage was matched by stabbing spurts of brass and relentless rhythmic drive from the musicians below, the music as freshly energetic as when the film was made. 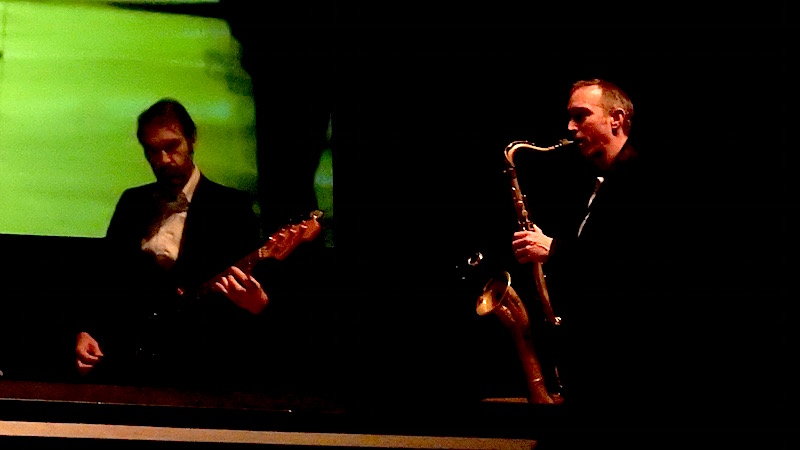 The main feature – Bristopolis – was a visual essay about the city compiled from old footage and newsreel films.  It was arranged in sections, starting with the role of the river and port (including some bizarre re-enactments of Tudor Bristol) both good (wine and tobacco) and bad (slavery). The music for this was abstract and responsive, with electronic textures to the fore. It soon became audibly apparent there was a fifth member onstage: keyboard player Dan Moore, shrouded in darkness, adding unexpected chord textures to the usual sound. 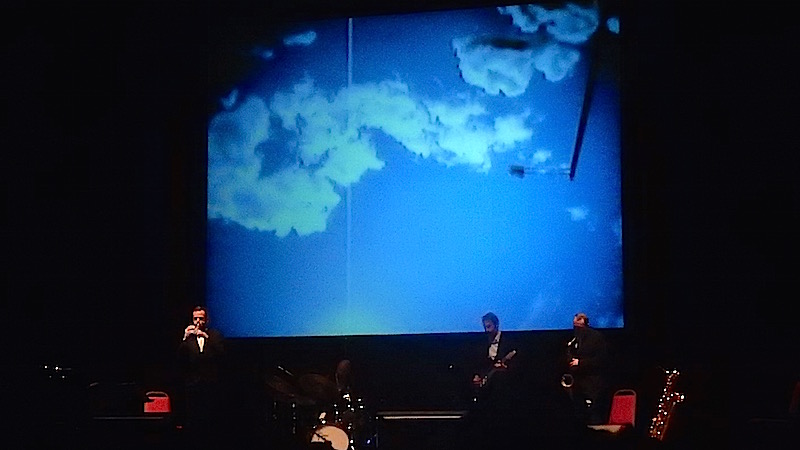 An extended section on ‘the war’ was given an atmospheric ambience with brooding basslines, simmering percussion and overlaid trumpet and sax working against bleak footage of familiar locations in bombed-out ruins. As ever with soundtrack performances it was hard not to be distracted by the visual element and it was a measure of GTB’s success that they found a perfect register for this part, evolving towards a triumphal shift to post-war peace and high jinks. In many ways the mood of the music was shaped as much by Clive Deamer’s drumming as the melodic contribution, his endlessly evolving undertow full of subtlety and space. Jim Barr’s bass was as persistent as ever, while Pete Judge’s trumpet and Jake McMurchie’s saxes conversed complementarily. This coalesced into an open sound, less rocky perhaps, and more ambient than your average Get The Blessing number. 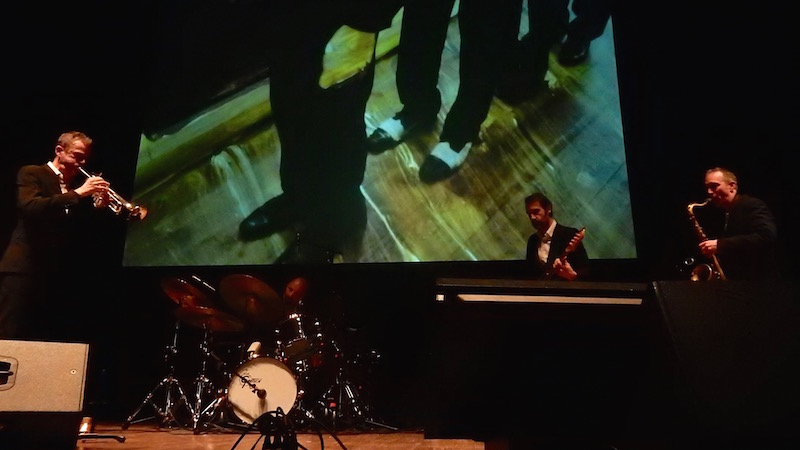 Toe-tapping stuff from Get The Blessing

It would be wrong to attribute this more spacious new music to a change in the band’s direction – they were doing an excellent job of enhancing the pace of the film, after all – but they seemed very comfortable with it so it will be interesting to see whether elements of it emerge in future. 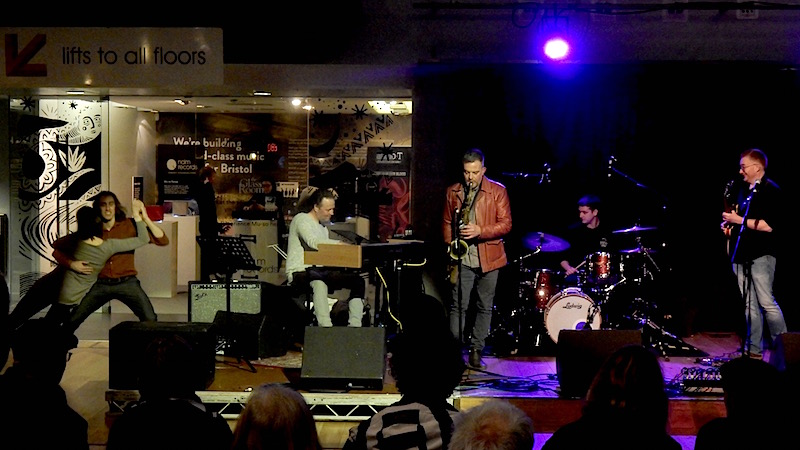 We, however, re-emerged to catch Groovelator’s funky jazz-rock keeping things boiling in the Foyer, with Ben Waghorn on tenor sax ripping into some very upbeat boogaloo. After the reflective ambience of Bristopolis it was the kind of contrast that good festivals always offer and a fine portent for a sizzling weekend to come.