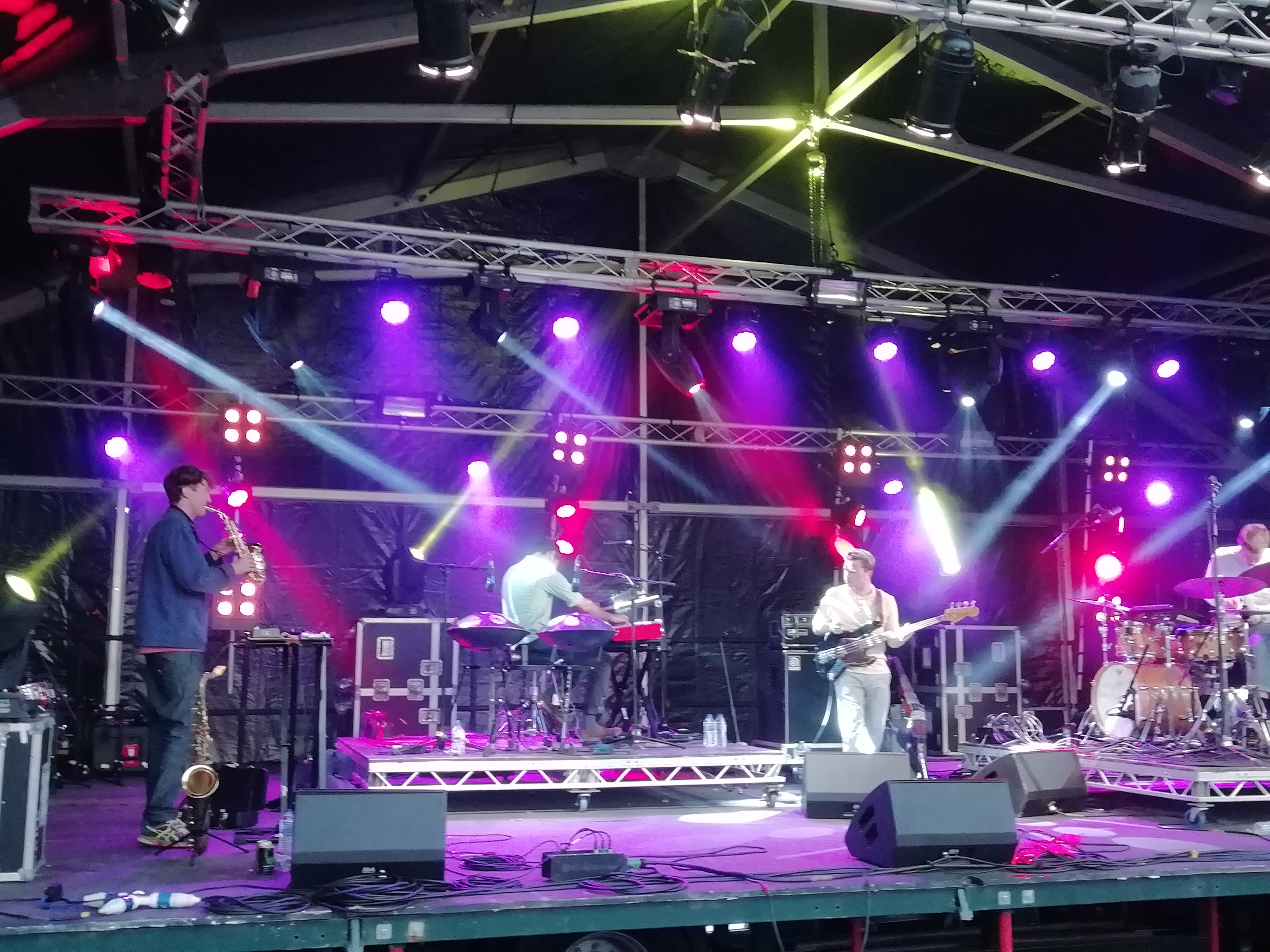 Back in business following a year off in 2018, Farmfest has lost none of its homespun charm. What the festival lacks in size it makes up for in quality programming. While the main stage arguably leans a little too far towards laidback grooves there’s no shortage of energy in the tents dotted around, which specialise in everything from house and techno to indie and punk. There’s also a disco in the shape of a steam train, a DJ booth made from an old tractor and a reggae soundsystem that mysteriously manifests from the ether each night as the live music ends.

On Saturday afternoon it’s getting nice and hot in the Big Blue tent as Bristol’s Scalping bring abrasive techno grooves and live instrument abuse accompanied by abyssal rave comedown visuals. Coming over like a nihilistic blend of Underworld and Front 242, the pummelling live drums and goth / industrial flavoured guitar keep things swinging, if not organically, then at least cyborg fashion. It’s compelling stuff which would go down even better after dark. Maybe next time they’ll have the late night slot they deserve. 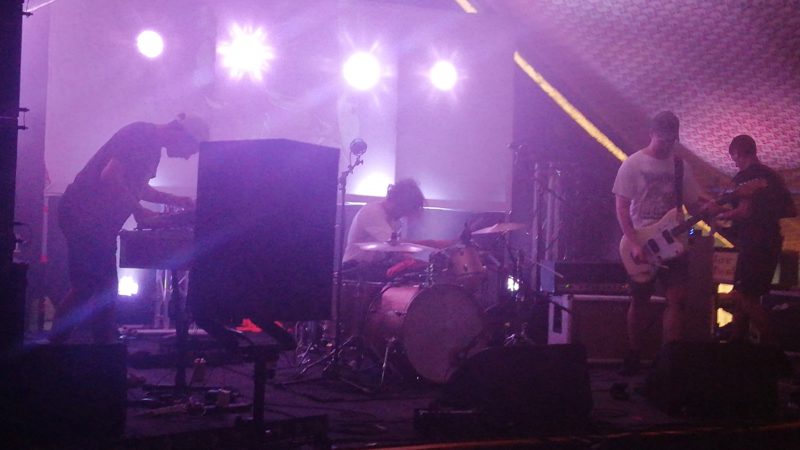 Nubiyan Twist bring an Afrocentric blend of jazz, funk, latin and more to the main stage. With rattling percussion, highlife-inspired guitar, punchy brass and alternately soothing and soaring vocals, their music recalls Lagos, Accra, Havana, Kingston and Sao Paolo, which is pretty good going for a band from Leeds. Meanwhile, South London noise-rock duo John tear it up ferociously in Usagi’s Tavern, a smallish venue that recreates the rough and ready charm of your local DIY live music pub. They’re followed by impressive jazz-rock fusion trio Waldo’s Gift. Having performed a well received set of Aphex Twin covers earlier in the afternoon, the Bristol band’s second show of the day consists of improvised originals that nod to Squarepusher, Red Snapper and Weather Report. Next on the main stage are Delgres, whose strutting, swampy blues-rock is driven by the powerful bass tone of the sousaphone. Meanwhile, passengers on the Soul Train are throwing down to some vintage electro, funk and boogie.

“Do you like punk?” asks Lice frontman Alistair Shuttleworth. “Well get the fuck out because it’s interesting music only from hereon in.” It’s no empty boast because Bristol’s Lice are one of the most interesting bands on the DIY rock circuit, and a million times more exciting than sleepy main stage headliners Morcheeba. Hardcore riffing gives way to Zappa / Beefheaft skronk, time signatures ebb and flow, and Shuttleworth recites twisted poetry through a mind-fog of mic delay. Easily one of the highlights of the weekend. DJ Ska V Goldsmith is a veteran selector with a deep crate of ’60s and ’70s island sounds – ska, rocksteady, early reggae and even a little mento. Apparently he’s the resident at a regular local session called Bruton Dub Club: Somerset’s cultural evolution continues. 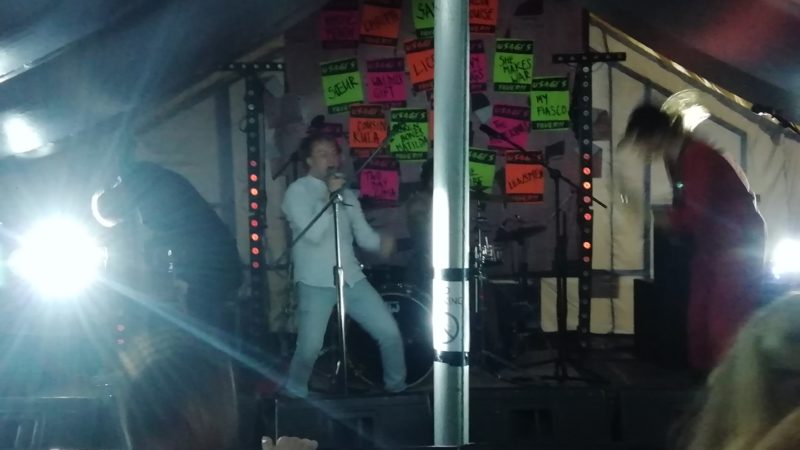 It’s a new day and Lensmen are an early treat at Usagi’s Tavern. Drawing on Joy Division, Magazine and others their propulsive post-punk benefits from lashings of dreamy synth and a frontman whose theatrically delivered story-songs give him the air of a surreal lounge bar raconteur. Backbeat Soundsystem have everyone dancing in the Big Blue. They’re not so much a soundsystem as an 8-piece reggae band from Cornwall but they have a bunch of catchy, original songs to go with their hard-hitting dub sonics.

Skinny Pelembe (main stage) doesn’t yet have the same presence live as he does on record but Doya Beardmore’s woozy, reverb-drenched guitar jangle and introspective songcraft mean he’s one to keep an eye on. Backed by a drummer and keyboard player (who also sings, giving an XX-like boy / girl flavour to some of the songs) Beardmore’s sound is a startling mix of psychedelia, r&b and shoegaze that requires total immersion, which means getting right down the front as volume’s too low everywhere else. Back at Usaji’s, No Violet’s blustery alternative rock benefits from unconventional song structures, dramatic chord changes and the intense presence of frontwoman Ellie Godwin. There’s a splash of Throwing Muses and a pinch of Babes In Toyland about their music, both of which can only be good things. 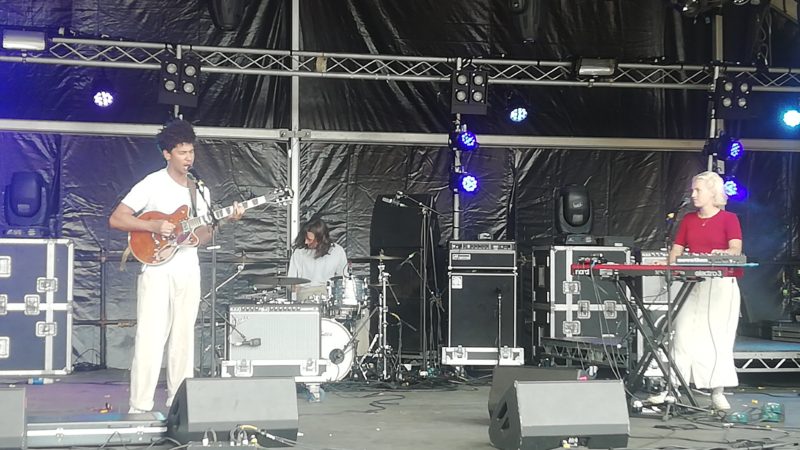 French band Juniore update the classic ‘yeye’ pop of 1960s France with a tough undercarriage of surf-inflected alternative rock. They’re more of a melange than a pastiche, and at times their driving grooves, vintage organ sounds, noisy guitars and cool, detached vocals recall Stereolab’s poppiest moments. Excellent, sunglasses-indoors-wearing fun. Meanwhile Ishmael Ensemble blend jazz and ambient electronica to suitably cosmic effect; their polyrhythmic dub-techno grooves and inventive chord progressions laden with bubbling synths, FX-laden guitar and cascades of spiritually searching saxophone. British jazz is having one of its moments right now and Ishmael are a great advert for the scene’s confidence and creativity. 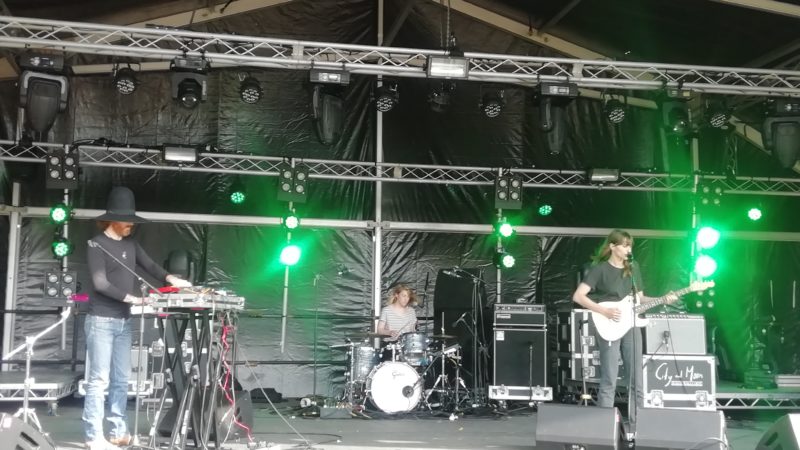 Somewhat hampered by a downpour that sends a good half of their potential audience scurrying into anything with a roof (the Soul Train is particularly rammed) Portico Quartet build hypnotic, increasingly frenetic grooves around minimal melodies beaten out on a pair of Huang drums (effectively space age steel pans hooked up to MIDI). Add in jazzy drums, analogue synth, post-rocky bass and dreamy sax, and you’ve got expansive jazz-rock-tronica somewhere between Polar Bear, Aphex Twin and Tortoise. Those of us who remain are a hardy bunch, including one man who stops dancing for a moment to vomit twice before washing it down with a rich, malty swig of Old Speckled Hen and continuing his moves. That’s dedication.

Noise-rock returns to Usagi’s Tavern as feted Bristol mob Heavy Lungs give it some spank. Frontman Danny looks dangerously up for it, and will be lucky to have made it through the set without injury. Saturday’s main stage headliners are James Holden & the Aninal Spirits. While sharing some DNA with Portico, here the emphasis is much more on the electronics than instrumental performances. Layers of synths – alternately twinkly, grunty, spacey, chunky and bleepy – provide the bedrock of the music, which enhanced by playful live drumming and cool blasts of sax.

Night having well and truly fallen, Maurice Fulton holds court in the Shapes tent with a masterclass that blends the latest underground U.S house with ageless classics like Sterling Void’s ‘It’s Alright’. He’s followed by Idle Hands mainstay Shanti Celeste with a super-tight and constantly surprising set of house, techno, garage and bass obscurities. She’s in great demand at the moment and it’s easy to see why.

Meanwhile, John Moores from Coldcut brings breaks, hip hop, dancehall and general weirdness to The Big Blue. He ends with Coldcut’s own, unbeatable remix of Eric B and Rakim’s ‘Paid In Full’, and we repair to the dub tent where Papa Rich is calling up all manner of dancehall and roots gems, while MC Clapper Priest opines on subjects as varied as Windrush and Oliver Cromwell’s connection to the Irish backstop. He hangs on for a set of deepest, oceanic dub from DJ Preacher, which is a perfect wind-down for a beautiful weekend in the Somerset countryside.