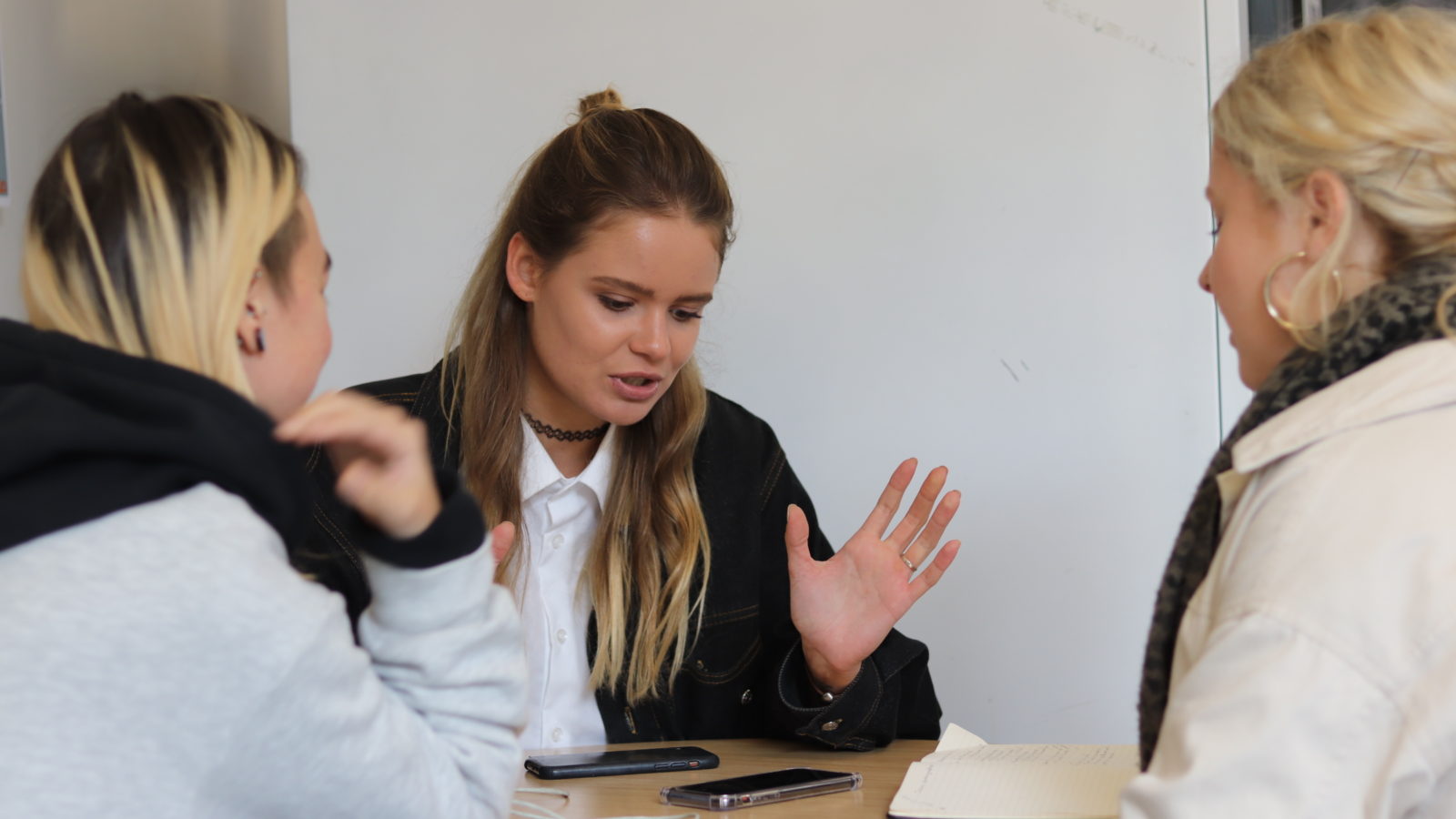 “Where are you going?” someone asks as we escape a hollow, University of Bristol lecture theatre.

“Back to Russia – it’s too cold here!” Nika jokes.

Later today, Nika Nikulshina and Olya Kurachyova are due to discuss activism in the digital age at Bristol’s Social Media Week. The pair are part of Pussy Riot; the prominent collective of Russian, feminist activists behind 2012’s ‘A Punk Prayer’.

By now, the movement should need no introduction. Seven years ago, Pussy Riot’s neon balaclavas and poignant political commentary first international made headlines with the now-viral music video: in which five members mock Vladimir Putin and his associations with the Orthodox church.

Adapted from the hymn ‘Ave Maria’, the video sees members of the collective performing at the altar of Moscow’s Cathedral of Christ the Saviour. Lo-fi footage captures their staged, erratic gig; the video later uploaded under the username imjustevil666. The stunt led to the arrest and imprisonment of two Rioters; Nadya Tolokonnikova and Masha Alyokhina.

In 2019, the collective continues to campaign against Putin’s Russia and beyond; for rights, equality and freedom of expression; despite unwavering governmental resistance. Just last month, even, Nika was detained unprovokedly by Russian police.

“I have a joke with my friends in Russia: it’s very hard to be friends with Nika,” she laughs.

“It’s because every national holiday, I’m detained. I don’t know why-” she pauses.

“I mean, I know why – because I’m a member of Pussy Riot. But usually, people who are close to me are arrested, too, even though they’re not political activists.”

Nika explains how 12 police officers “with dogs” arrived at her flat last month and detained her and some friends. The arrest took place during Russia’s annual Victory Day celebrations in what Nika believes was a preventative measure against her activism.

“At midnight, when the festival had ended, they just let us go.”

The thought of unwarranted arrest is terrifying, but Nika and Olya talk nonchalantly of the incident. But equally, I haven’t invaded a World Cup match in protest of Putin’s Russia, either. 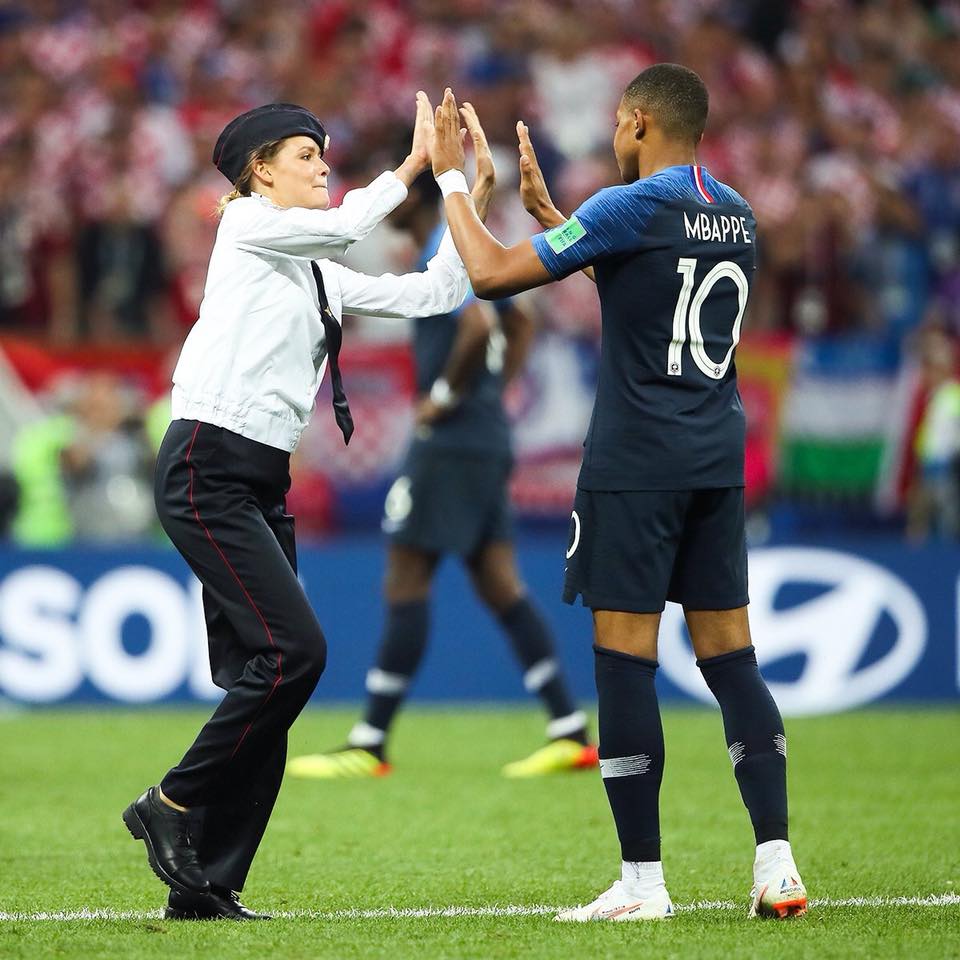 The pitch invasion aimed to protest the conduct of Russian police

Last summer, Nika and Olya were among four Pussy Riot activists who invaded the semi-match between France and Croatia. The protest, in which Nika high-fived France’s Kylian Mbappé mid-match, aimed once again to protest conditions in Russia including the disciplinary treatment of political activists.

“The World Cup incident wouldn’t have worked without social media,” explains Nika. “Without it, the message may have been super local.”

“We spent just 40 seconds on the field so, of course, it wasn’t clear what had happened,” Olya adds.

“But we prepared a video beforehand that our friends posted after the invasion which contained an explanation.”

“I would even say that nowadays, nothing exists without social media. You know; commercials, brands on Instagram, celebrities. Social networks and the internet is our reality.” 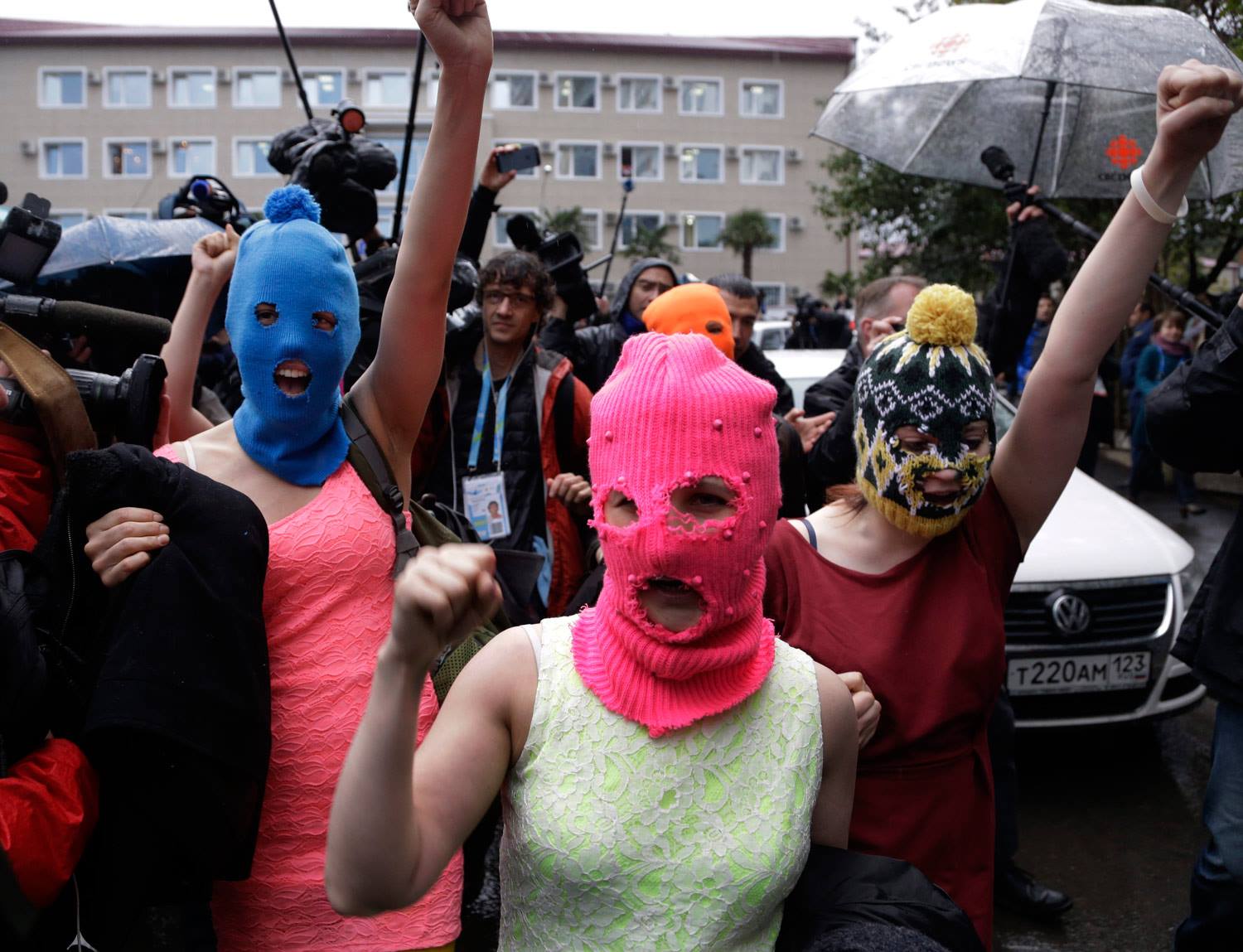 Pussy Riot are active on social media and share a range of updates; from new music to recent arrests

But is sharing or liking a post on social media enough to meaningfully support their cause? Nika seems to think so.

“The performance does not end when it finishes. The [World Cup] action is continued when people share, like or of course, don’t like posts relating to it on social media. This forms long-term action.”

Away from the oppression Pussy Riot face in Russia, the pair natter about their activism in the quiet university canteen. I ask how it feels to visit Bristol – a city which, I suggest, embraces their message – and whether this impacts their approach:

“It’s an inspiration. We experience a feeling of solidarity. Sometimes, we become tired of Russia’s current situation, so it’s like a breath of fresh air,” Olya divulges, with a sigh of relief.

Nika agrees: “If somebody can, then why can’t we, in Russia?”

Before Pussy Riot, Olya campaigned for LGBTQ+ rights as a queer, feminist activist. With Bristol Pride on the horizon, we chat briefly about what queerness and LGBTQ+ rights mean to them.

While Olya understands queerness as being “open, free and doing what you want”, Nika shares her frustration with the ongoing dialogue.

“We should not even have to talk about this. I think it should be a common right just to be yourself without any discussion. For me, this is a fight to be yourself; to not have to explain who you are and why you are.”

While we discuss LGBTQ+ rights, I mention Kenneth Macharia; the gay rugby player from Bristol who has recently been denied asylum in the U.K. Now, Kenneth may face persecution in his country of origin due to his sexuality. This is the first time the pair have heard of Kenneth’s case, but appear visibly moved. I ask whether they stand with Ken. 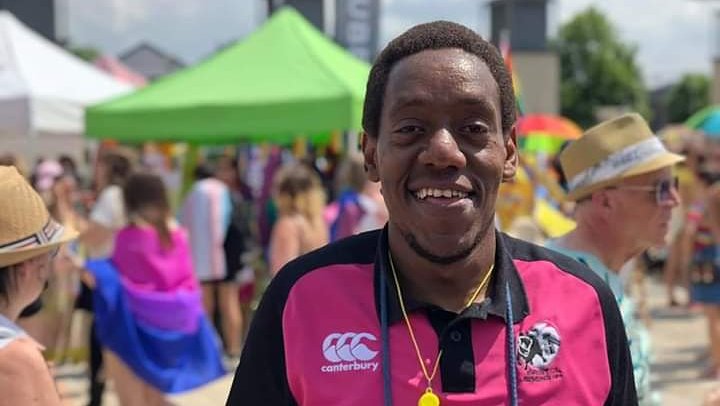 Kenneth Macharia plays for Bristol Bisons: his teammates have campaigned for him to remain in the U.K

Without hesitation, Nika responds: “Definitely. Nobody should be sent to a place where they will be persecuted due to their sexuality. So yes, I am standing with both hands up.”

Nika begins checking her phone – we’ve been huddled over a high-top table for almost twenty-five minutes. So, I move the conversation along toward a label commonly slapped across Pussy Riot’s name: punk.

As a music genre that has become synonymous with the collective’s identity, I bring up a Bristol band often labelled as politically-charged punks, too: IDLES.

Nika has heard of them and says she likes their music. “Would you work with them?” I inquire, feeling like a pushy mum of Bristol music.

Nika in the process of setting up an independent theatre in Moscow – an alternative to the conservative, government-controlled formats now inaccessible to her in the city.

“In Russia, the people who watch theatre – they are still afraid of naked bodies. It can be very conservative.

“The modern day could not be understood without some political context – everything is political. Private is political. So, contemporary theatre is something that happens inside you – in connection with what is happening around you.”

It’s a key point to note about Pussy Riot; their reputation as a feminist punk band is far too reductive. In the past few years, members of the movement have manifested their message through street art, panel discussions and books.

“For me, punk is not about music, but about lifestyle,” says Olya.” “It means that I live my own life and be myself. And to be honest, I don’t like punk music! I’m a dancer: I like music to dance with; to move to. Punk [music] is not my style.”

Underpinning their difference in expressive mediums, though, lies Nayda’s conception of punk as a ‘method of surprise.’

“Our method, again, is about a feeling of the present. It’s a reaction to the stuff that is happening around us.”

“We’re not designers,” Olya adds. “It’s very spontaneous; something happens, and then we think: let’s react. Let’s do something.”

“So, we will see what is happening next, and we will answer”, Nika ends, with a knowing grin. 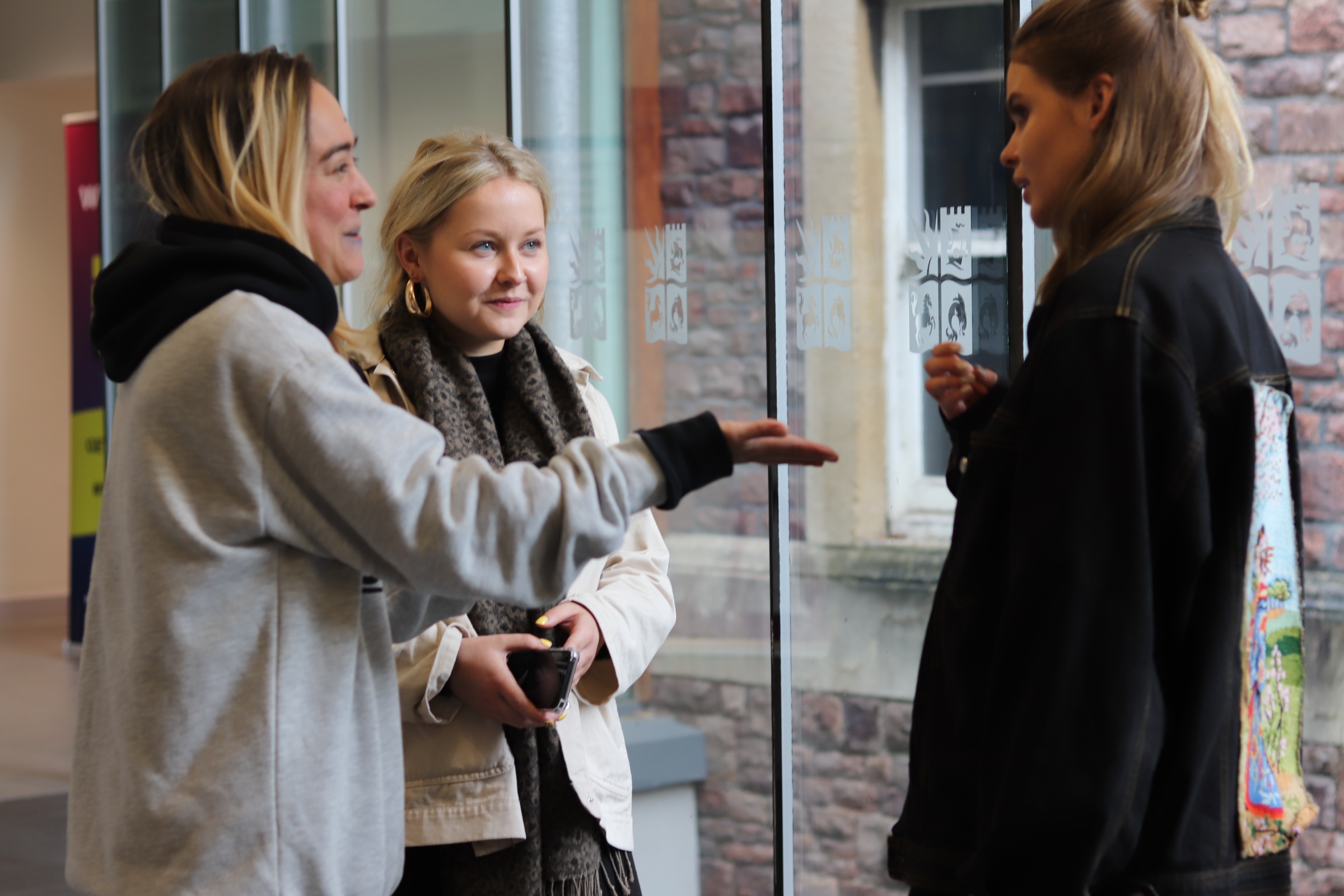