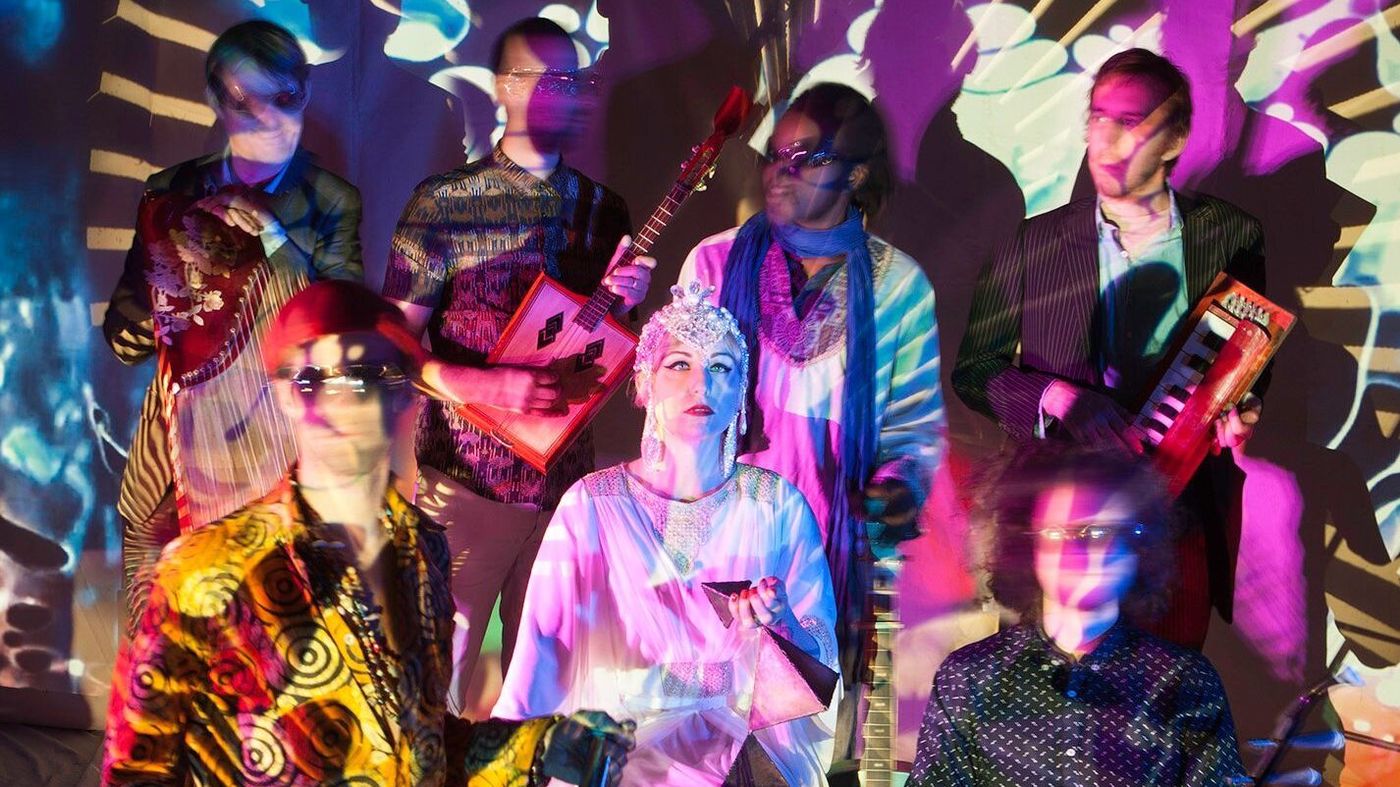 So it’s a double dose of jazz weeks to mop up the last of the summer wine.

With most of the regular sessions taking a break there’s still a Bank Holiday feast of trad and swing to look forward to, plus a couple of choice local jewels at the Fringe.

The Old Duke marks the long weekend in fine style, as always, with its ever-popular celebration of old and new jazz out on the cobbles of King Street.

And you can keep the old school thing going afterwards with hot jazzers Bama Mine at Canteen (Tuesday 27).

Alternatively, for an equally groovy slice of what’s hip (and hop) right now Motion’s Marble Factory (Saturday 24) have a fine triple bill featuring Henry Wu’s nod to Herbie Hancock’s Headhunters aka Kamaal Williams playing live as well as the Afro-funky Heliocentrics (pictured at top) as the build up to a DJ set from producer and legend Madlib.

Later in the week there’s the promise of more cool grooving when Snazzback saxophonist  Lyrebird (aka Dave Sanders) guests with Waldo’s Gift at The Gallimaufry (Wednesday 28) and Snazzback themselves host psychedelic jazz and soul quintet Konketsu at the same venue (Thursday 22).

And then, on the same night, there’s Brighton’s idiosyncratic Duncan Harrison appearing at the third entirely unpredictable Time Will Say Nothing evening at Cafe Kino. That’s one for those who like things provocatively unexpected. Oh – and fans of harps will be pleased to catch the folk-prog quartet Jakobol  at Mr Wolf’s (Thursday 22)

Jazz at the Fringe is the one session that’s kept us going all summer and they have one of trumpeter Andy Hague’s celebrated tribute bands coming up. With a cracking lineup of local luminaries the six-piece Silverado (Wednesday 21) is devoted to tunes from the late great Horace Silver, a man who somehow combined fluently catchy melodies with clever and occasionally complex arrangements. This brilliant band is all-too rarely seen so their annual trip to the Fringe is always worth catching – as is the return of Tony Orrell’s Big Top (Wednesday 28). This twin-drummer project was forged in The Fringe last year after Tony Orrell and Matt Brown had jammed together, and, by recruiting improvising heavyweights like Jake McMurchie and Dan Moore, they have built a formidable electro-acoustic unit.

Newish venue The Den – Dockside hosts a powerhouse evening of gospel, funk and soul from the London Community Gospel Choir (Sunday 1). This high-energy ensemble were a great hit at last year’s Jazz and Blues festival, with a driving band and many no-holds-barred solo singers among its ranks.

For a more stripped-down vocal jazz and soul experience the duo of Molly Miranda King & Ruth Hammond (Fringe, Thursday 22) offer an afternoon set, while Peanut Butter Club singer Elly Hopkins will be revealing more of her blues and jazz repertoire at Leftbank (Tuesday 20). And then there’s the altogether remarkable one-man band that is Paul Bradley who pops up twice – firstly at Tobacco Factory (Sunday 25) and then at El Rincon (Thursday 29). A formidable guitar and vocal improviser with a unique mastery of loop pedal trickery and an entirely unpredictable imagination, Paul’s solo shows have a quality all their own. He’s followed at El Rincon by the new pairing of the Brandt & Padron Duo (Friday 30), with Cuban trumpet virtuoso Michel Padron joining the semi-legendary post-punk double bass of Pete Brandt for an eclectic set of swing, Latin and other tunes.

The Sunday sessions at the Stag & Hounds have been attracting an interesting roster of guest soloists to join the house band. Pianist Tim Funnell (Sunday 25) trained in the Netherlands but also spent time in Paris before returning to his native UK with impressive technical skills and a wide range of styles under his belt.

The 8-strong collective Old School Funky Family (Canteen, Thursday 22) are no strangers to the Parisian scene, hailing as they do from the Basque country and purveying, as you would guess, classic jazz funk grooves. Pumped along with baritone sax and sousaphone it’s only the distinctive sound of accordion that adds a Gallic flavour to their hard-edged sound.

And finally … a sneak preview of another set of jazz gigs at the Old Vic starting in early September, promoted by Ian Storrer. The first will be the Monk and ‘Trane themed collaboration of O’Higgins & Luft (Sunday 8) followed by the seminal sound of Partisans (Sunday 29) and Andy Hague’s brilliant evocation of the legendary Miles Davis set Kind Of Blue (Sunday 13 October). Judging by the popularity of Ian’s last season it’s worth booking ahead for any of these.