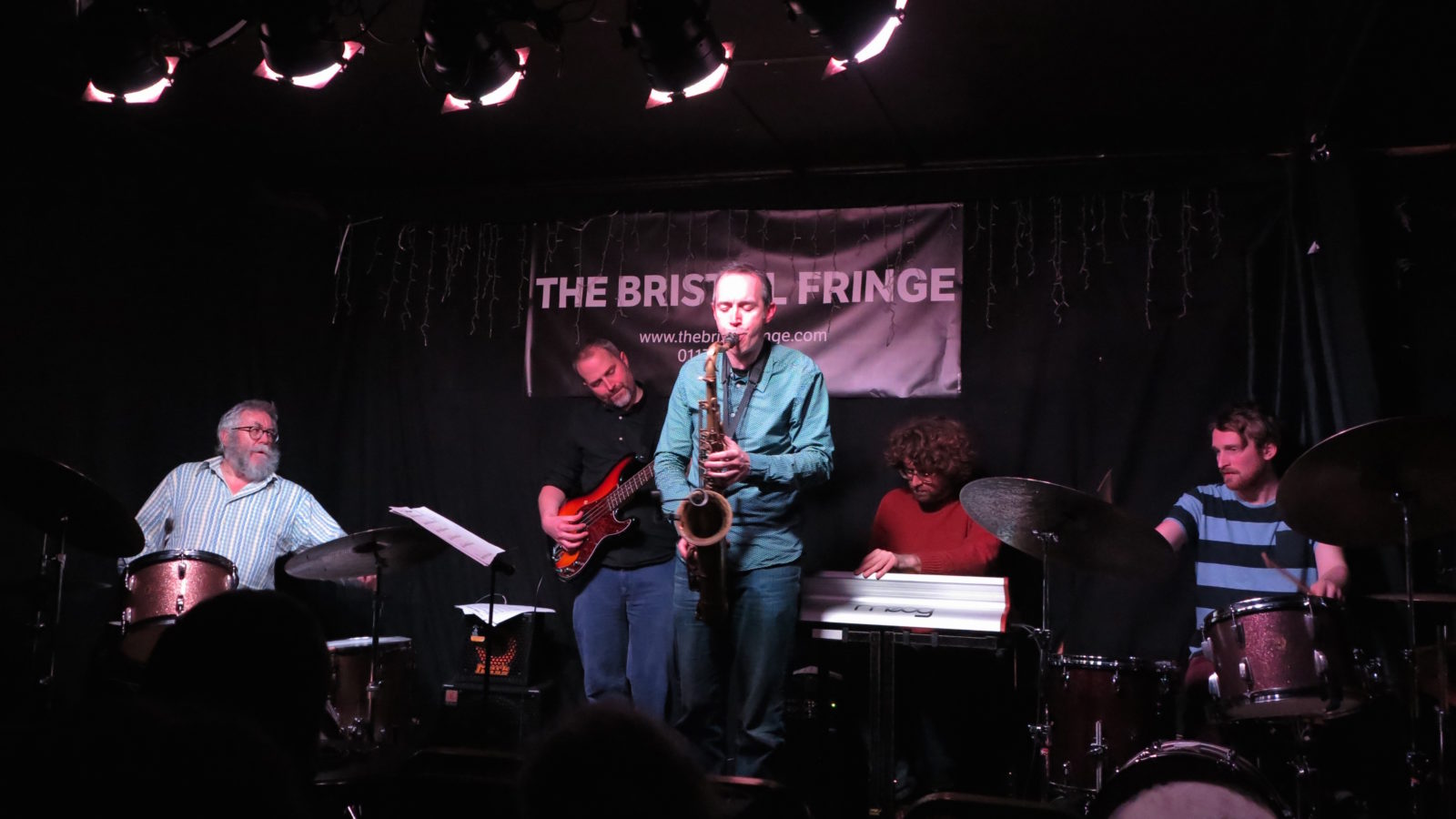 In the context of music the word ‘play’ has an interesting ambiguity. Captain Beefheart nailed it, saying: “When Frank (Zappa) and me go into the studio he goes to work but I go to play!” Jazz musicians often get a particularly bad rap on this front, not helped by those highly self-righteous viral videos of prima donna antics from famous jazz pianists, but the best players can evince a real playfulness in their music, especially when enjoying the right company. Tony Orrell’s Big Top is a fine new gathering of talent already bonded by previous collaborations, with players having worked together in Sefrial, Dakhla Brass, Pushy Doctors, Modulus III and other combos. They’re great musicians but, for all their musical smarts, once they got on stage together it was definitely playtime. 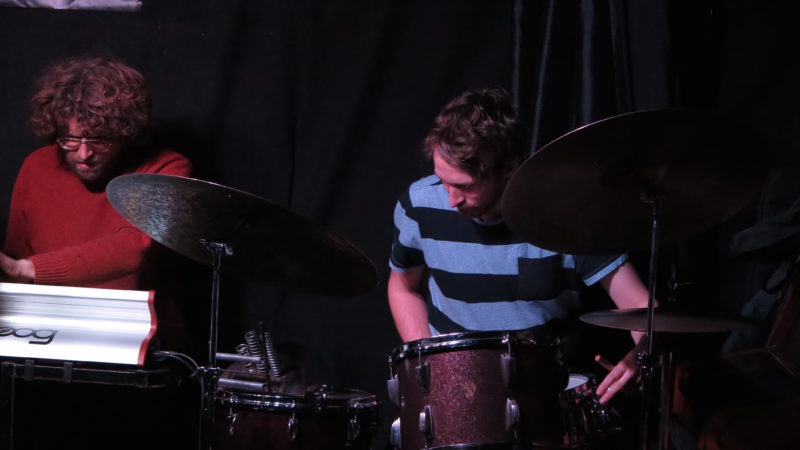 If the sight of two drum kits bookending the Fringe’s stage suggested an impending sonic onslaught the reality proved quite otherwise, with Tony and Matt Brown exercising a conscious economy of sound on opening number The Shoes of the Fisherman’s Wife are Some Jiveass Slippers, Tony spinning his voodoo head cymbal while Matt worked up from bare hands through soft sticks to hard. Bass player Riaan Vosloo rolled the simple bassline around, the phased effects echoing the classic sound of a Roland 303, and Dan Moore’s Moog Subsequent synthesiser chimed in to synch with Jake McMurchie’s elegant dissection of the Mingus tune. 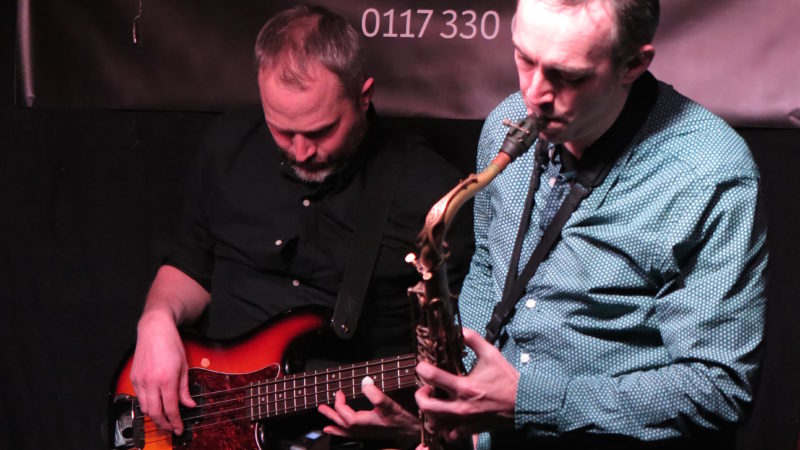 That spaciousness carried through the evening, notably in the epic instrumental rendition of Sun Ra’s Love in Outer Space, the almost lounge-loucheness of the tune given a Jah Wobble insistence on bass while the drums engaged in a muttering dialogue. Jake’s sax stroked the simple waltzing tune with the kind of melodic respect the pushy doctor himself –Andy Sheppard – would have given it until the minimal percussion eventually released a solo from Matt Brown that cleverly managed to be full of the unexpected while maintaining the tune’s easy continuity. A smooth handover to Tony led to a deft reconstruction of the groove just in time for the ending. Yusuf Lateef’s Morning led to a similar exploratory journey, this time featuring Dan Moore’s moody synth lines initially bubbling into action before finally floating down to land back in the tune’s light-touch groove, all held steady by Riaan’s patiently minimal monotone bass rhythm. 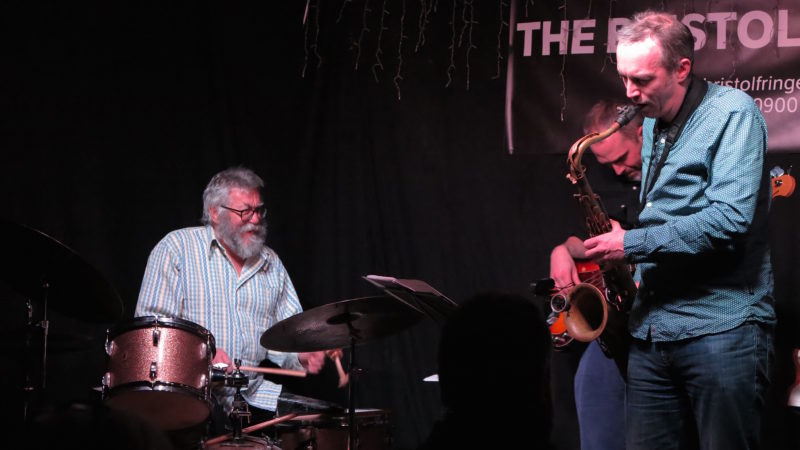 There was a clear formula here, with different pairings taking the direction of the pieces at times while the other three players attentively shaped their parts around the new narratives. It could have sounded shambolic but it never did – on the contrary it was as together as any well-rehearsed chamber jazz. The difference was the sense of fresh ideas unravelling and reforming in the moment, making a unique performance out of even the most familiar pieces. Most impressive, for a comparatively new improvisational band, was the consistency of ‘sound’ throughout, an open weave of electro-acoustic elements that seemed impeccably judged as a collective whole. Combined with the elements of playfulness that collective judgement gives the Big Top a real musical identity that very much deserves a wider audience. 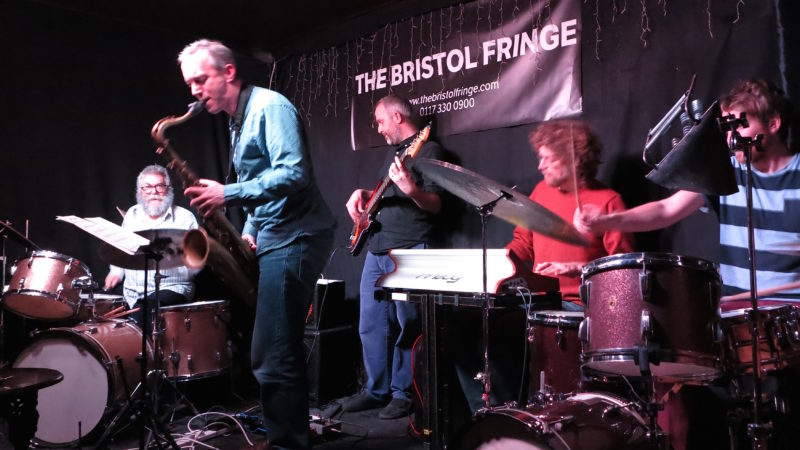 And, lest it all comes over as a bit too laid back, their version of William Parker’s Rise was a rousing finale, beginning with an electronic assault from sax and synth that set off a rolling bass and drum tide and eventually released Jake’s hard-bopping energy into a vigorous sax and drum interchange. As the number progressed different pairings coalesced, notably a sweet duet of bass and synth that played out while a sparky dialogue between drummers led to a fine coda ending complete with big smiles all round, not least from the Big Top’s ringmaster (ringleader?) himself.