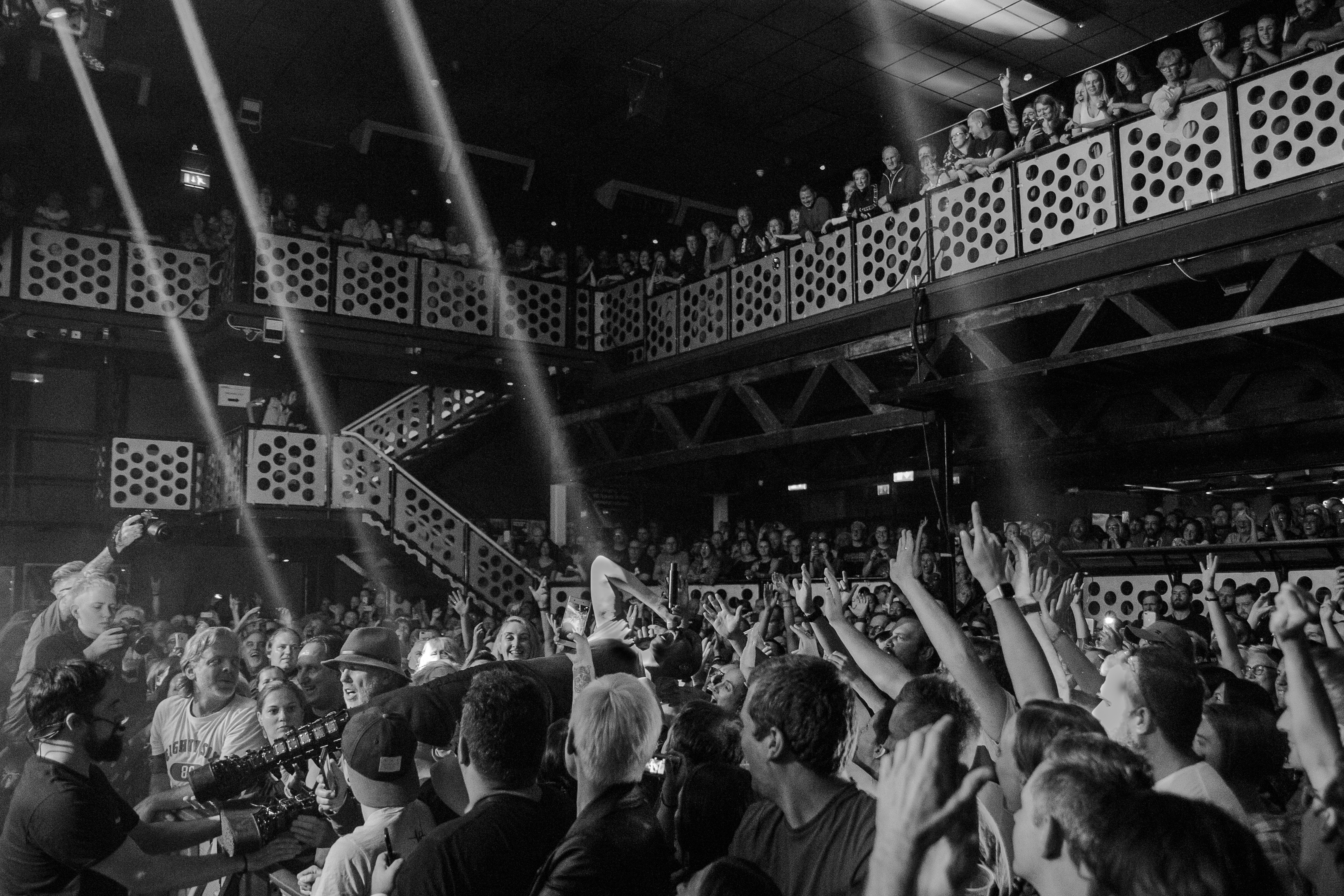 Every week, our crack team of live music photographers – Phil Watson, Shona Cutt, Mike Evans and Phil Riley – are out and about shooting gigs for our online reviews. We asked each of them for their three pix of the year, with a brief line of explanation  for each one. Phil Riley’s gig photography is also the subject of an exhibition at Longwell Records in Keynsham, running throughout December. 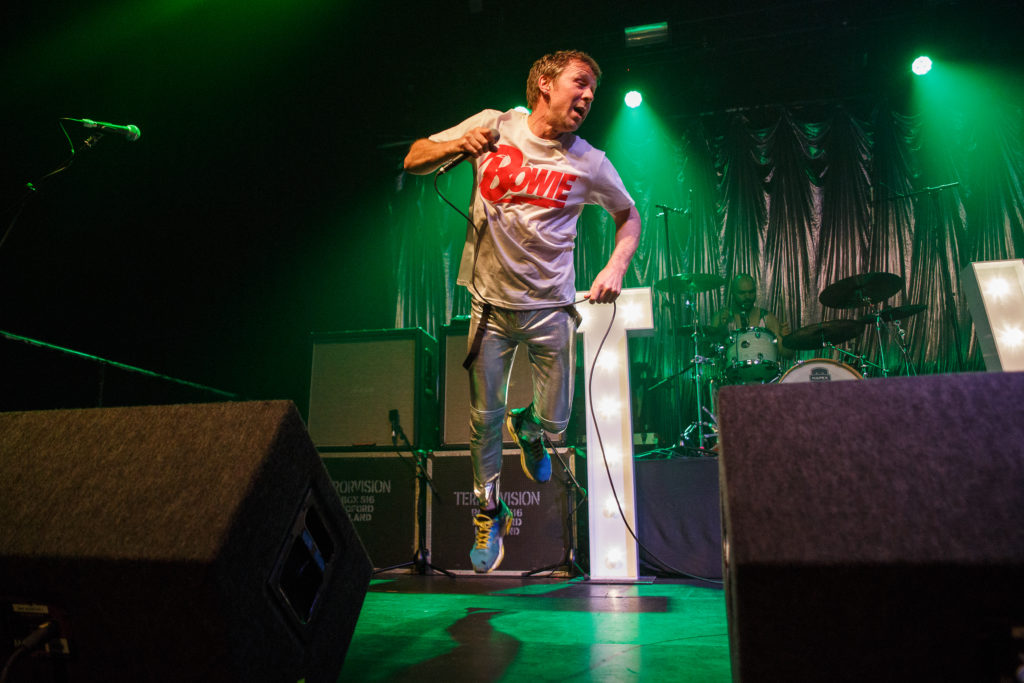 Terrrorvision, SWX, May
I was blown away by Terrorvision’s infectious energy on the Brit Rock Must Be Destroyed Tour in 2018, and had to photograph them again. Tony Wright doesn’t stay still, and is either jumping or high kicking across the stage – or in this case – flying! Not all heroes wear capes… 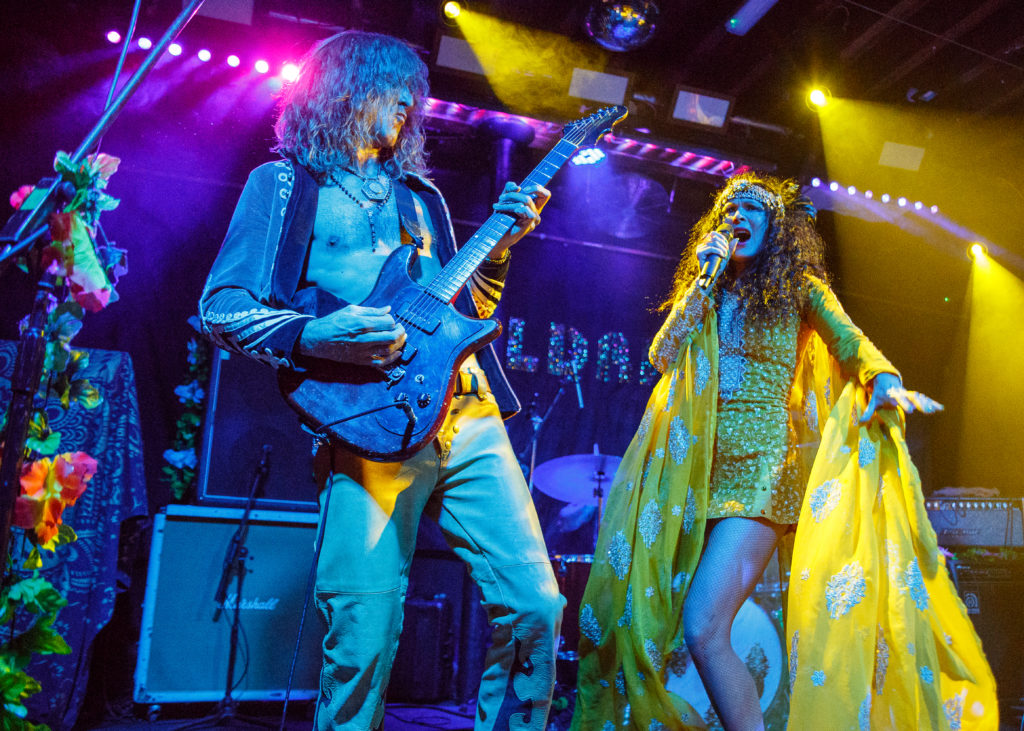 Goldray (supporting Rosalie Cunningham), The Fleece, August
Goldray are a riot of swirling psychedelic colour and sequins, superb fun to photograph. Keen to bag a space down the front, I got to The Fleece just as the doors opened and bumped into Kenwyn House in the ladies’ toilets!  (The mirrors are bigger for doing make-up than backstage.) 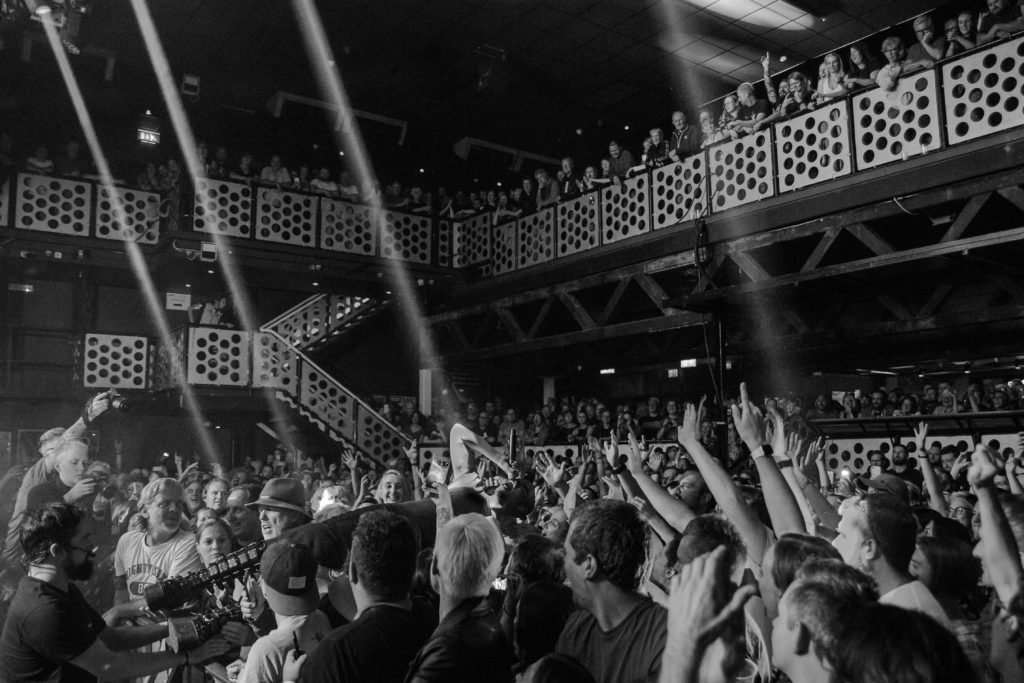 Skunk Anansie, O2 Academy, August
Security had warned us that Skin would be coming down to the barrier in the third song and we had to stay to the sides of the stage – not easy at a sold out gig, with a pit full of photographers and security! I love that every person in this photo has a different expression and the bouncer is only holding on to Skin by her ankles. 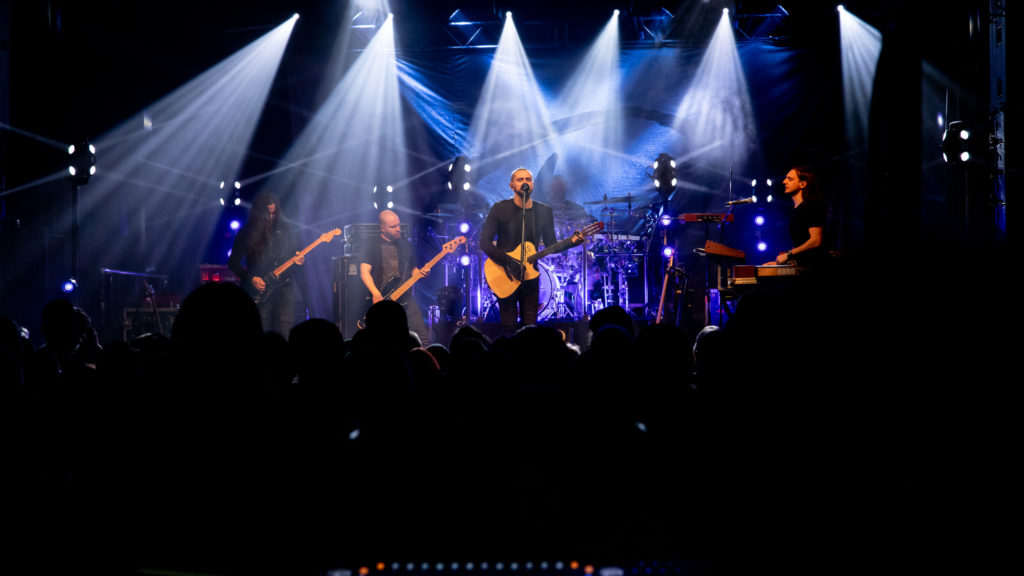 I’d always managed to miss Riverside on tour, so I was glad to finally see them. I took this shot holding the camera above my head and using the flip-out screen to see. 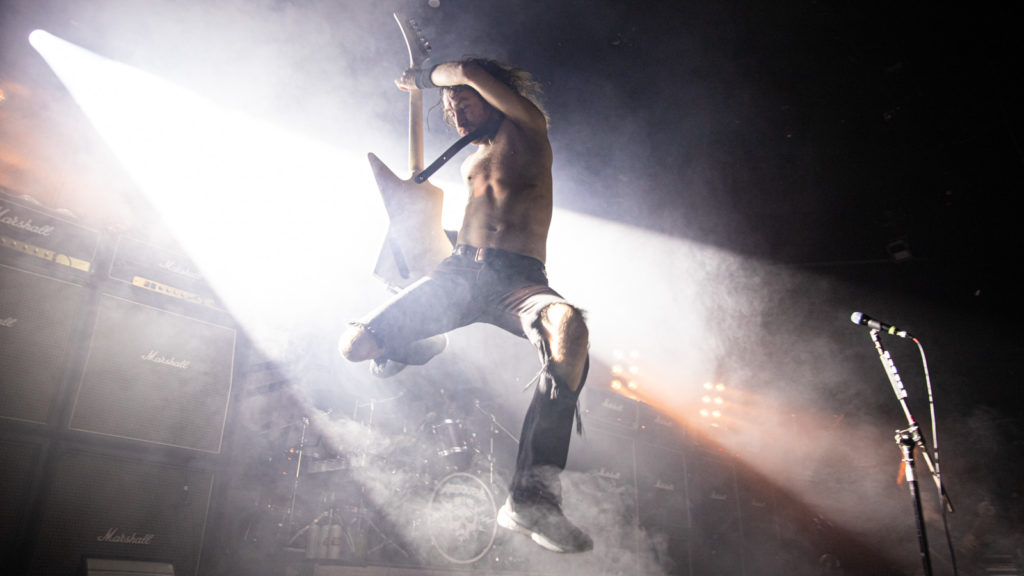 Last time I saw Airbourne in Bristol at the Colston Hall (May 30, 2010), it was the loudest gig I’d ever been to and I was right at the back of the circle. So being in close proximity to their amps and PA speakers in the pit, I made sure my ear plugs were properly inserted. This shot was taken just after they’d come on stage and the lighting was right for one frame to catch Joel in the air. The frame before is dark and the frame after completely blown out. I had no idea if I’d got the shot or not and carried on shooting.  After what had been a pretty stressful day, I was pleased to see this shot on the back of my camera when I was on my way home on the train. 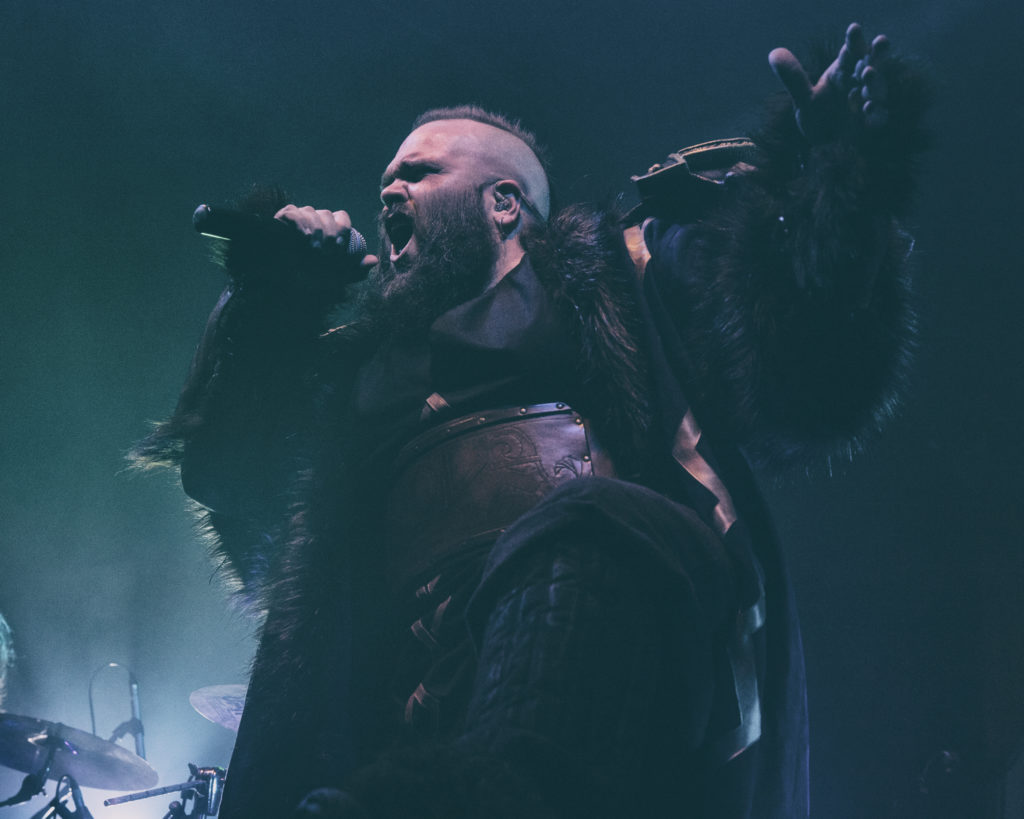 Francesco Cavalieri liked this shot enough to make it his Facebook profile photo, and fair play to him wearing that on stage every night. 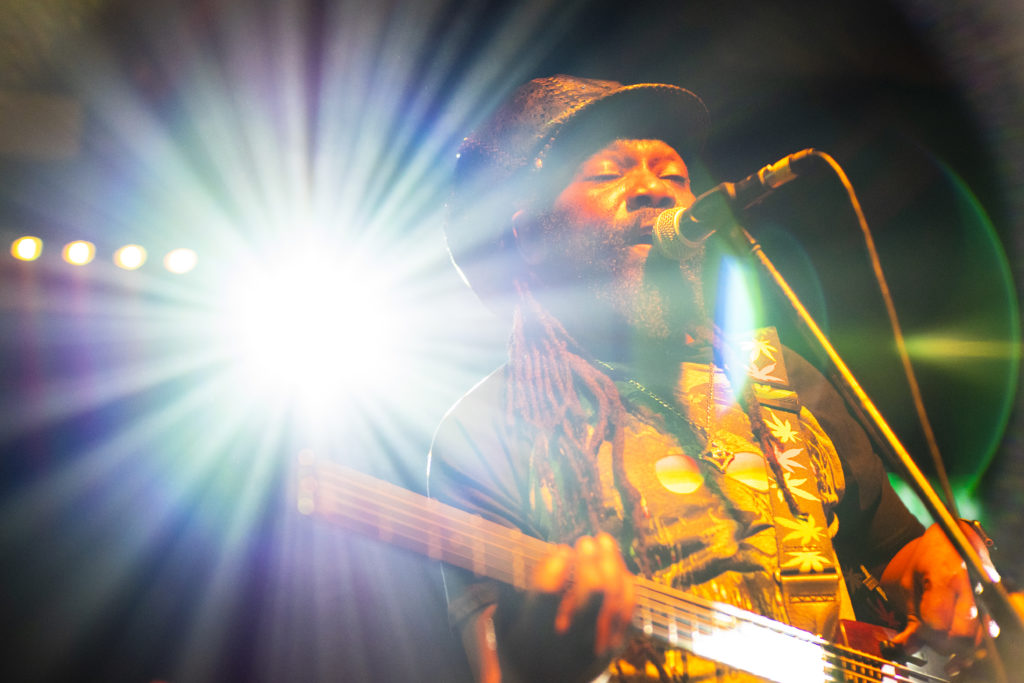 I positioned myself between the many pillars in The Fleece with a Sony A7 camera coupled to a manual focus, 50mm, super fast, f1.1 rangefinder lens from China’s 7Artisans. I clocked a rotating light hit me in the face a couple of times on a predictable trajectory so I aimed directly at it, waited for it to come around and dazzle me and the result is this, Easy Star All Stars. 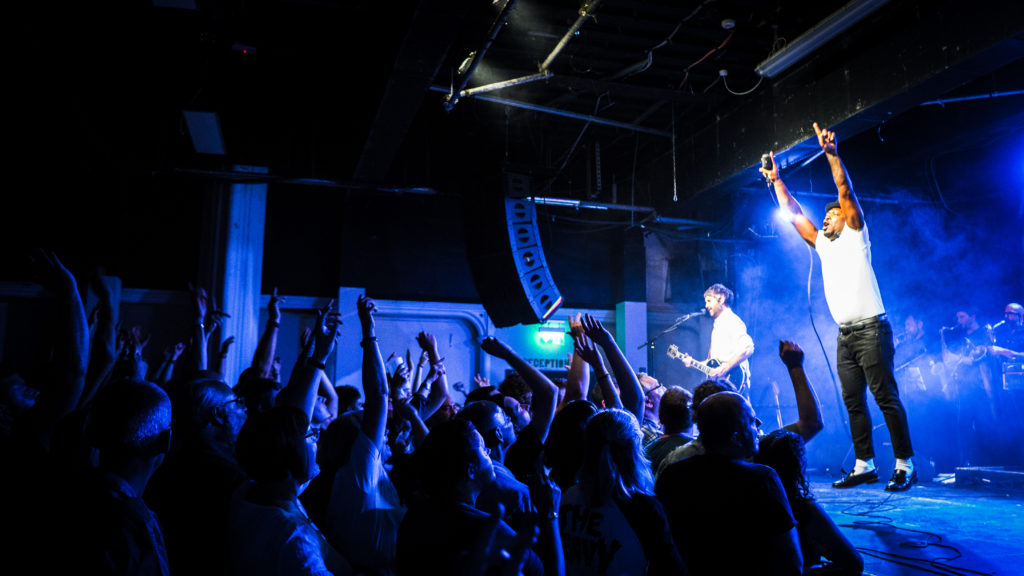 The Heavy, Trinity, May

On my first assignment for Bristol 24/7, I shot this uplifting shot of The Heavy front man appearing to levitate due to the energy of the crowd using a – rather slow – Pentax 18-35mm F4-5.6 adapted to fit a Sony A7 with the use of some sticky back plastic to keep the aperture wide open. With no ability to autofocus this lens, I manoeuvred to a restricted area off to the side and, before the other photographers clocked on, I shot across the crowd hoping to capture the energy in the room as Kelvin Swaby repeatedly tried to reach the ceiling. 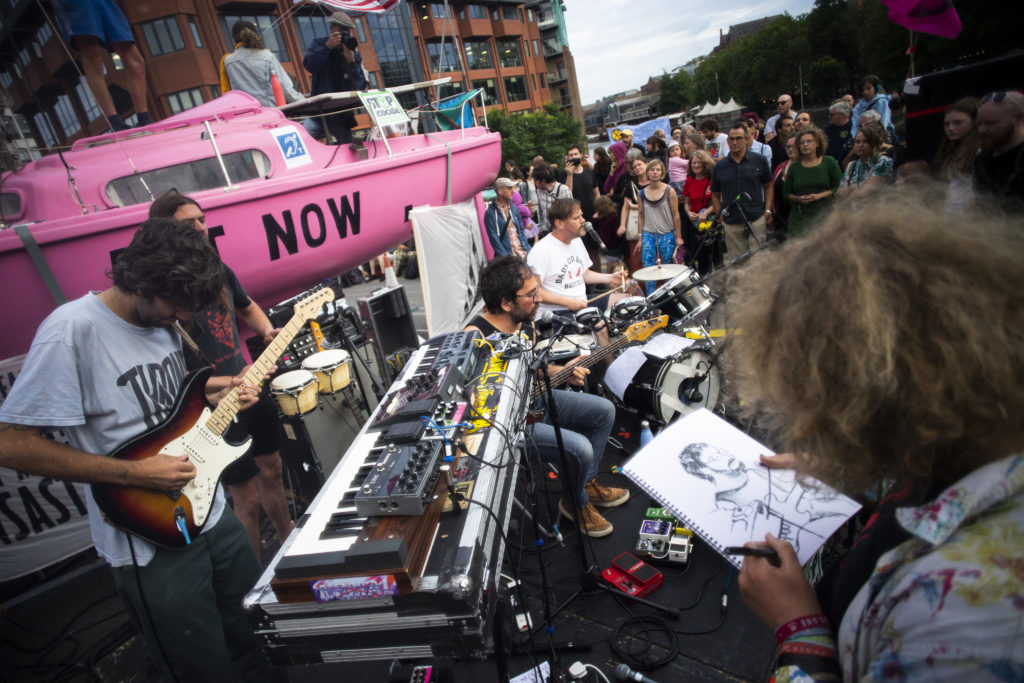 A wild card entry. Yes the horizon is far from level and there are some backs of heads but I don’t mind. There is a lot going on here. This photo captures central Bristol as it was that day: busy, makeshift, good spirited, anarchic, rebellious and some how ordered and hopeful. I shot this surprise performance from BEAK at the Extinction Rebellion shut down of Bristol Bridge with a manual focus, vintage, super wide, 20mm, f2.8 Canon FD lens on a modern mirrorless Sony A7. 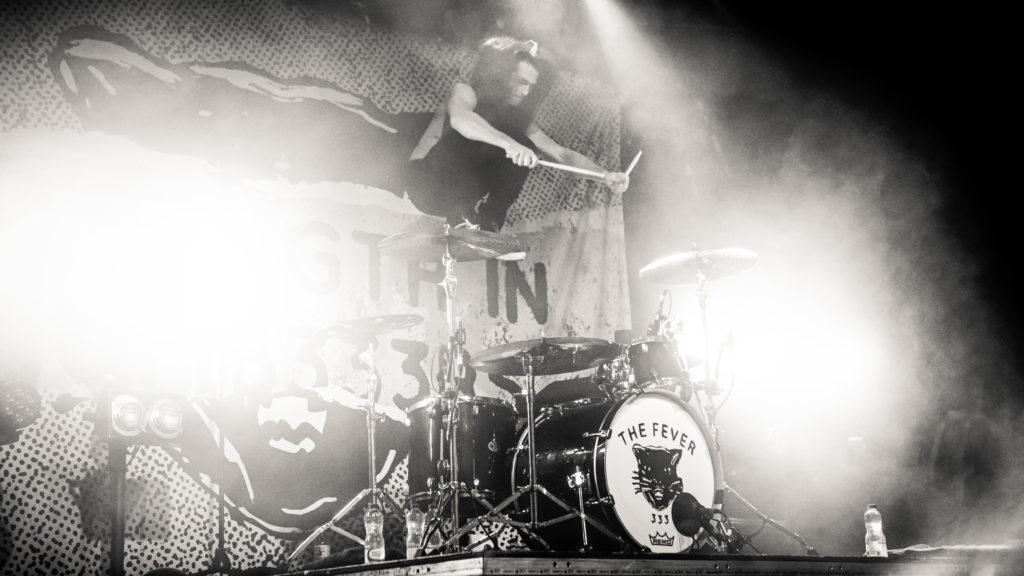 It’s not often you get the opportunity to get a clear shot at the drummer, due to lighting and obstacles – i.e. cymbals. In this shot we see the drummer from Fever 333 jumping up from behind his kit in tremendous style and enthusiasm. 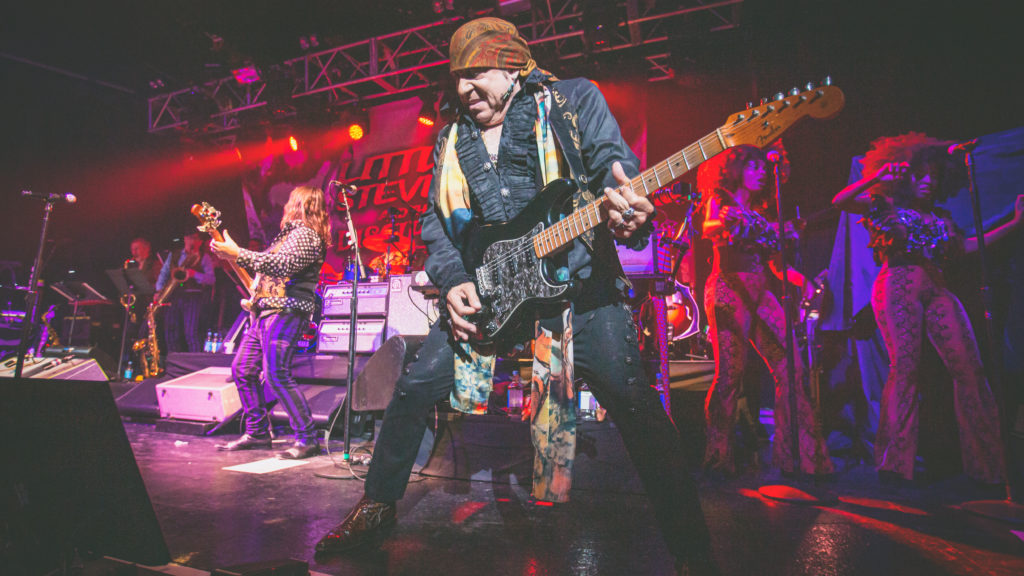 Little Steven and the Disciples of Soul, O2 Academy, May

This was my first shoot for Bristol 24/7. Little Steven, aka Steven Van Zandt, and his band The Disciples of Soul put on such a flamboyant show. This images highlights just a few elements. 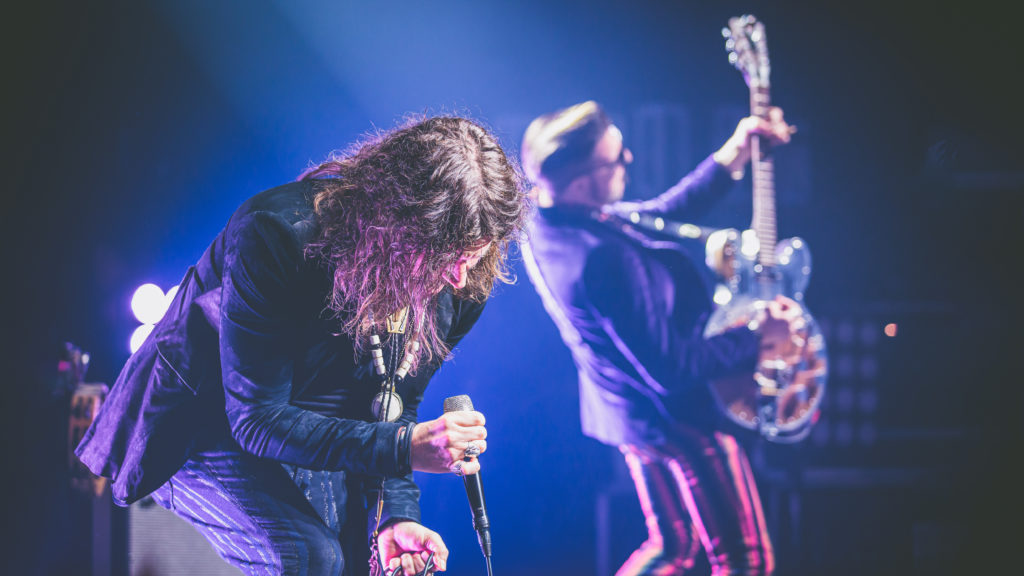 This image shows the intensity of the vocalist Jay Buchanan and the quirky character of  guitarist Scott Holiday in the background.