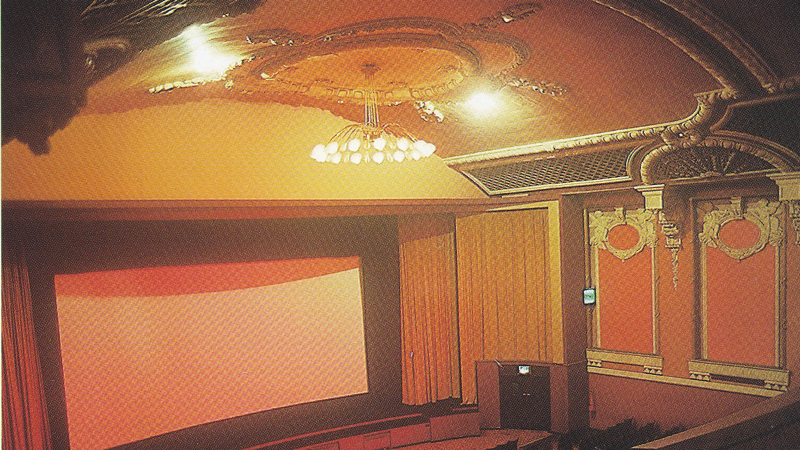 “Here one need not dream of dwelling in marble halls but can enjoy the reality,” rhapsodised the Bristol Times and Mirror on 30 November 1921, the day after the Whiteladies Picture House was opened by The Duchess of Beaufort. Much was made of the cinema’s grandeur and slightly peculiar mix of architectural styles dreamed up by local partnership La Trobe and Weston, including that striking if functionless tower, which is now generally corralled under the catch-all ‘art deco’ label. Still surviving to this day from the “inviting looking loggia and vestibule” are some of the “Ionic columns of Pavanazza marble from the quarries of Italy”, although many features are long gone, including the improving artworks adorning the auditorium, which were intended to illustrate “various phases of life which are demonstrated by the cinema”.

An undated photograph of the auditorium, probably taken in the late 1920s. If you look closely at the far left and right, you can see two of those improving murals

When the capacity first night crowd of 1,314 punters sat down to watch winsome Mary Pickford in Pollyanna, it was something of a triumph for the consortium of local businessmen behind the project. They had faced fierce opposition from the Young People’s Evangelistic League, which occupied the existing building they intended to incorporate into their cinema. What’s more, this had formerly been a nunnery whose ‘white ladies’ gave the street its name. Planning permission was initially turned down, though this was overturned on appeal. The god-botherers did win one important concession: no alcohol was to be served on the premises.

Punters queuing back in 1929, shortly after the cinema was acquired by ABC. Their choice is between Greta Garbo in The Mysterious Lady with full orchestra and Alf’s Carpet – a forgotten Britcom about two busmen who acquire a magic carpet

In 1929, the Picture House was taken over by Associated British Cinemas (ABC). Talkies arrived in Bristol that same year, when the King’s Cinema in Old Market screened Al Jolson’s The Singing Fool. But up in Clifton, they remained fiercely conservative and held out bravely against this tide of new-fanglement. A photograph of the cinema taken in November 1929 shows it advertising Greta Garbo’s The Mysterious Lady “with full orchestra”.

The inside of the single-screen auditorium pictured in 1975, three years before it was carved into three screens

The first of many alterations and modernisations took place in 1957, during which the circle was enlarged. A period of turmoil began in 1978 when, in common with many UK cinemas, the large single auditorium was carved into three to combat declining attendances. Ownership changed from Cannon to MGM to Virgin before it was re-named an ABC and finally acquired by Odeon, who purchased the ABC chain in 2000. As local concern mounted over plans to sell the building and convert it into a health club, campaigners managed to secure Grade II listing status in 1999. When Odeon sold the building to a private property developer in December 2000, it emerged that the company had imposed a ‘restrictive covenant’ that prevented the venerable Picture House being used as a cinema again. The doors were finally closed on Sunday, 16 December 2001.

A vociferous community Save the ABC campaign was launched, with celebrity support from Nick Park, Paul McGann, Ken Loach, Tony Robinson Lord Puttnam and Robert Del Naja from Massive Attack. In 2003, it was placed on the English Heritage at-risk register. But although various plans were put forward, the cinema remained forlornly boarded-up for nearly 15 years.

All photographs courtesy of the Cinema Theatre Association archive.

Read more: Bristol Everyman Cinema to open on May 20

Read more: What to expect from the new Everyman Bristol

Read more: 15 places in Bristol that once were cinemas