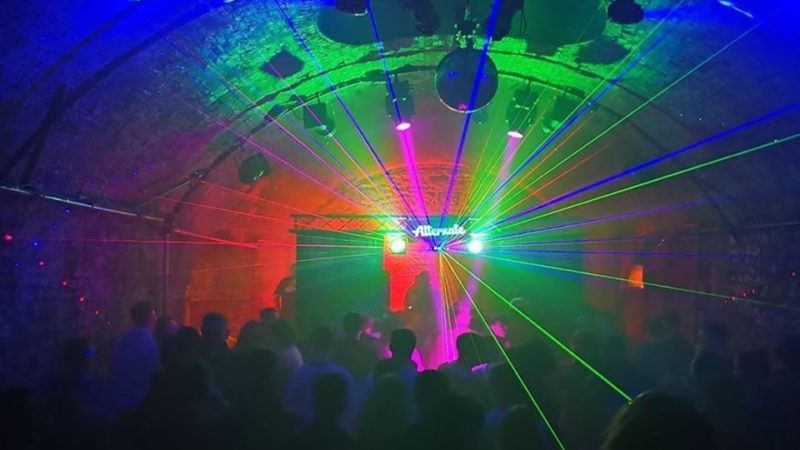 Alternate has steadily made a name for themselves with some classy lineups and this one, in particular, promised to bring some much-needed sunshine to a very rainy Bristol, this time at The Loco Klub underneath Temple Mead’s Passenger shed.

Stepping into the main room, the immediate object of attention was the Sinai Sound system brought in by Alternate. It was hench and it created bass so low that it was making clothes and heads vibrate.

Warming up the night were residents Sentience and Sam Binary providing a selection of upfront rolling tunes with a few classics thrown in to get the crowd going including Ed Rush & Optical’s Funktion, Calibre’s Stay High and a remix of Splash’s Babylon. The crowd took their time to start dancing but by the end of the set we were sufficiently warmed up and a trickle of people starting filing into the venue.

Up next was first of the guests, London duo Paul T & Edward Oberon with their MC Duskee. These guys have made steady strides into the scene with a variety of sounds from groovy vocal anthems to some harder-edged rollers thanks to V Recordings becoming a familiar home for them.

Their set followed their release style: a really varied selection containing heavy breaks and bass, flipped with a smattering of some old school sounding samples and drums. A Dub Conspiracy remix, Critical Impact’s Pretty Girl and two of their own tunes really helped to fill the dance floor. Moon in Your Eyes and Take My Breath Away both have honey-coated vocals to draw you in but deliver a sucker punch with hard bass drops. It took them a little time to work the crowd but halfway through the set, they had them in the palm of their hands.

Technimatic were up next at midnight. Known for their cinematic style and not afraid to step into harder territory, they started with a remix of their own Superhero and then treated us to some of their more recent material such as Holding On. One particular uplifting belter – LSB’s remix of Parallels – caused the crowd to sing out in unison.

This wasn’t the only remix to be found as the old school version of I’m A Junglist plus Commix’s All I Ever and break-heavy, wobbly sub-bass remixes that were part of their signature homage to our fair city. No question about delivery here, the main room nicely full but with space for all to dance while Technimatic showed why they have risen to royal levels in the scene.

Fabio – the godfather of drum and bass – took the next spot; the room was eagerly awaiting the legend. As much as his classic smooth sounds were anticipated, he’s known to play a varied set of deeper tracks with edge and melancholy. Luckily, this was one of those sets, taking the audience into spacey, dark, snarly, soul-infused atmospheres.

He did drop some vocal classics, such as Alix Perez’ sultry SWRV, but the rest of the set was nothing but cutting edge dubplates and emotive, powerful, razor-sharp beats. This is where you can hear the forefront of the scene and it’s fair to say the crowd loved it. Vibes central!

Rising name Trex provided the finish to the night with a set of rollers to keep the party going till the end, plenty still hungry for more after the headliner.

Bristol has a variety of brick arched venues but this is a perfect clubbing space: the roofs in here are much higher than their counterparts, giving you a bit more space to breathe whilst remaining atmospheric. There are also two decent sized bar areas to relax in with a good selection of drinks and plenty of space outside to grab some fresh air.

Hat’s off to promoter Rob Britton – this venue works for drum and bass: it’s cosy but not claustrophobic and has a character aplenty, something with which we are thankfully blessed with in this city. The Loco Klub flies a fine flag for dance music and has injected fresh blood into the various scenes they serve.

Read more: How Intrigue have been bossing the Bristol drum and bass scene for 17 years