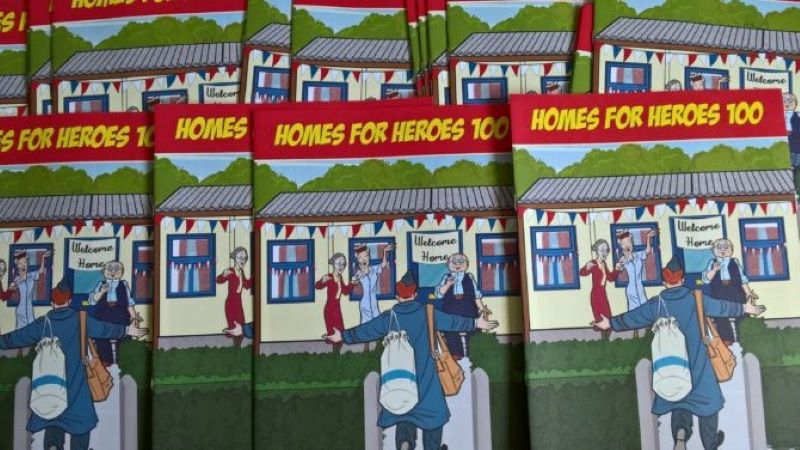 Bristol Festival of Ideas are marking 100 years of Bristol council estates with a series of events and the publication of a new comic book. Homes for Heroes 100 was devised and written by Bristol historian and journalist, Eugene Byrne, and illustrated by Tony Forbes.

Nearly 40,000 copies of the book have been printed. They will mainly be available at Festival of Ideas’ Homes for Heroes 100 events, and in related community projects led by other organisations and venues. Some copies are available to the general public while stocks last.

The book’s author, Eugene Byrne, said: “Our aim was to entertain and inform youngsters about the remarkable story of something most people take for granted – decent housing. Tony has done a fantastic job in telling the tale from the viewpoint of an ordinary Bristol family. He’s made it humorous, but also often very moving, too. But it’s not just for children. We hope it will be accessible to people of all ages. Housing is an important issue, and one that has become very urgent once more.”

Free copies can be picked up at branches of the Bristol Library service across the city and the Tourist Information Centre on Harbourside. There are also copies in the Sea Mills 100 Museum , Bristol Cathedral and the reception area of City Hall, among other locations.

Copies will also be available at some Bristol Open Doors (September 13 – 15) venues, and during Festival of Ideas’ bi-annual Festival of the Future City (October 16 – 18) copies will be available from the festival information desk in Watershed. There will be a number of sessions in the festival discussing the impact of council housing and how it might best be delivered in the future.

Other organisations who are using the comic in their community and educational work include Knowle West Media Centre, Local Learning, Bristol Museums and some local scout groups. They are also being used by students at the University of Bristol and University of the West of England.

For regular updates on where copies of Homes for Heroes 100 are available, visit https://www.facebook.com/homesforheroes100/