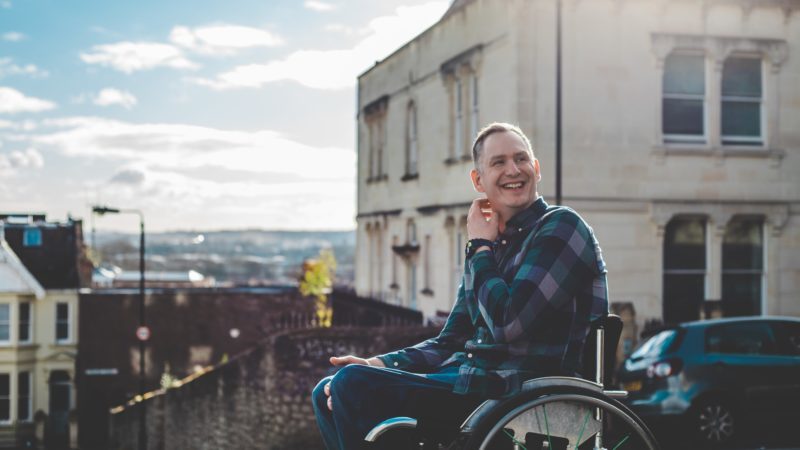 Stephen Lightbown’s debut poetry collection, Only Air, has just been published by Bristol-based Burning Eye Books. The popular Bristol wordsmith tells Joe Melia about the collection, the city’s poetry scene and how writing and performing have enhanced his championing of disability rights.

What does the word ‘poetry’ mean to you?

I find poetry is a way to express myself, my views on the world around me and how I fit in to that. I also really enjoy that through poetry and thinking of interesting ways to use language, the sound of words and how they fit on a page has challenged me to really delve into the subjects that I write about. For instance, I know that not being able to access a building is frustrating, but poetry helps me to really understand why and what might be behind that other than the basic point of not being able to get through a door. Poetry has given me a platform to talk publicly about disability rights in a way that I didn’t have before and I’m incredibly grateful for that.

What inspired you to start writing and performing poetry?

I started writing properly in 2013 and the main motivation was just wanting to get out of the flat. I was living alone, having a tough time at work and been through a family bereavement and really just wanted some company and to try something new. I had a few empty notebooks, signed up for a 10-week class and it went from there. I loved it. One week we were asked to write an epistle poem which is a poem in the form of a letter. I wrote a letter to my legs and the tutor, Malika Booker, an incredible poet, suggested I should think about writing more about my disability. I was reluctant at first because I didn’t just want people to think I could only write about that topic. However, once I started, I couldn’t stop, and twenty years of experiences and frustrations just started to flow.  From there it just felt natural to share publicly

How accessible have you found the poetry world, both physically and artistically?

Lots of poetry events and readings take place upstairs in venues such as pubs or in basements of cafes. These venue spaces are often smaller in size due to the number of people attending events and access isn’t always great. Those that do have access might not always have a disabled toilet, be near accessible transport or may have a stage which can’t be accessed by a wheelchair. It’s not an exact science but I tend to find that for every ten events maybe a third might be accessible which is frustrating. This Is not only because people with access needs aren’t able to enjoy a great art form but the opportunities to be inspired to share experiences and words publicly aren’t there. I’m sure there are some amazing voices out there with incredible things to say that just don’t have a platform to be heard. In the main, conversations I’ve had with promoters has been positive and I don’t believe anyone is actively seeking out to host events in spaces that are inaccessible. But I do think more can and should be done.

In 2016 you wrote: “The reaction to the poems has been brilliant and I’ve been overwhelmed by the comments I’ve had. What has struck me the most has been that some people have said they have challenged the way they think about disability. For me this is the biggest compliment I could receive.” How much did this reaction to your early work encourage you to keep going?

It was a huge factor. An example is that I once wrote a poem about people asking me in lifts why I’m a wheelchair user. I was finding this happening more and more and living in London and using public transport daily it would happen at least two or three times a week. To that person it might just be a throw away question but from my point of view I was being asked to relive a fairly traumatic experience to strangers pretty frequently. So I decided I would talk about it on my own terms in my own way and people started to email me and say thank you for talking about something that happened all of the time and others started to email to say they had never thought of the impact about asking a question like that.

I write about my disability to show it is possible to do normal things and lead a normal life. I read a recent article with Lee Ridley – Lost Voice Guy – and he spoke about how people with disabilities tend to get put into two camps – heroes winning Paralympic gold medals or a burden on society. The truth is there are millions of people just going about their daily lives trying to get by, doing fairly mundane things and we don’t acknowledge and celebrate that enough in its own right.

How did you approach selecting poems to go in your new collection, Only Air?

I wanted poems in my first collection to be about my experiences as a wheelchair user. I also knew, having no experience in this, that I wanted to work with a mentor who could help me pull together a manuscript and be really honest about the good bits of my writing and the bits that needed more work. I was incredibly lucky to work with the epically talented Bristol poet Rebecca Tantony over a six-month period. During that time, I started to develop an idea for the book of wanting it to be divided into six sections, one for each month I spent in hospital following the accident, and that each of those sections would be themed around aspects of my rehab such as sitting up or experiencing setbacks. I also knew I wanted each section to include one poem that featured my dad who died when I was 21. This was important to me as by including dad in the book I felt like he could become a part of the almost twenty years of my life he has missed

Is Bristol a poetry city?

It’s a huge poetry scene and we should be incredibly proud of what is happening in Bristol right now. We have this wonderful blend of a vast number of events, incredible poets, writing groups, spaces to write and some thriving independent publishers. Put all of that together and it is a great place to be inspired to write and absorb poetry. Add to that we have a spectacularly gifted city poet in Vanessa Kisuule and you would be hard pressed to find another city offering what Bristol does. I’d actually go as far as to say my book would not exist were it not for living in Bristol.

Which other poets and performers have had the biggest influence on you?

When I was eight my mum took me to see Roger McGough read in Accrington. I remember thinking at the time that was one of the most exciting moments of my life, being out with mum, past my bedtime and being in a room full of adults listening to this bloke with a ponytail read poems. It was brilliant and that feeling has stayed with me ever since and been a huge driver behind wanting to become a poet. Aside from the poets I’ve already mentioned I feel incredibly lucky that some of the poets I most admire have agreed to include quotes on my cover including Raymond Antrobus and Sabrina Mahfouz. Both of those poets talk in a way that really resonates with me and if I could be five per cent the poet they are I would be extremely happy.

Salena Godden as well is someone I will always make time to see, again her poems seem to really tap into the mood of a nation and her performance style is utterly mesmerising. Plus, she has a poem on the window outside Arnolfini, and what’s not to love about that.

I must also give a mention to the whole of the poetry and spoken word scene in Bristol, as I have said previously, the range and depth of poets in the city is staggering. Every event I attend I come away inspired from and I have learned so much by absorbing all I can from the many fabulous poets I am lucky enough to be able to see within 15 minutes of my front door.

Stephen Lightbown’s debut poetry collection, Only Air, is out now. The book will be launched at Spike Island Café on April 11. For more information, visit https://www.eventbrite.co.uk/e/access-all-poetry-only-air-book-launch-tickets-55838495443