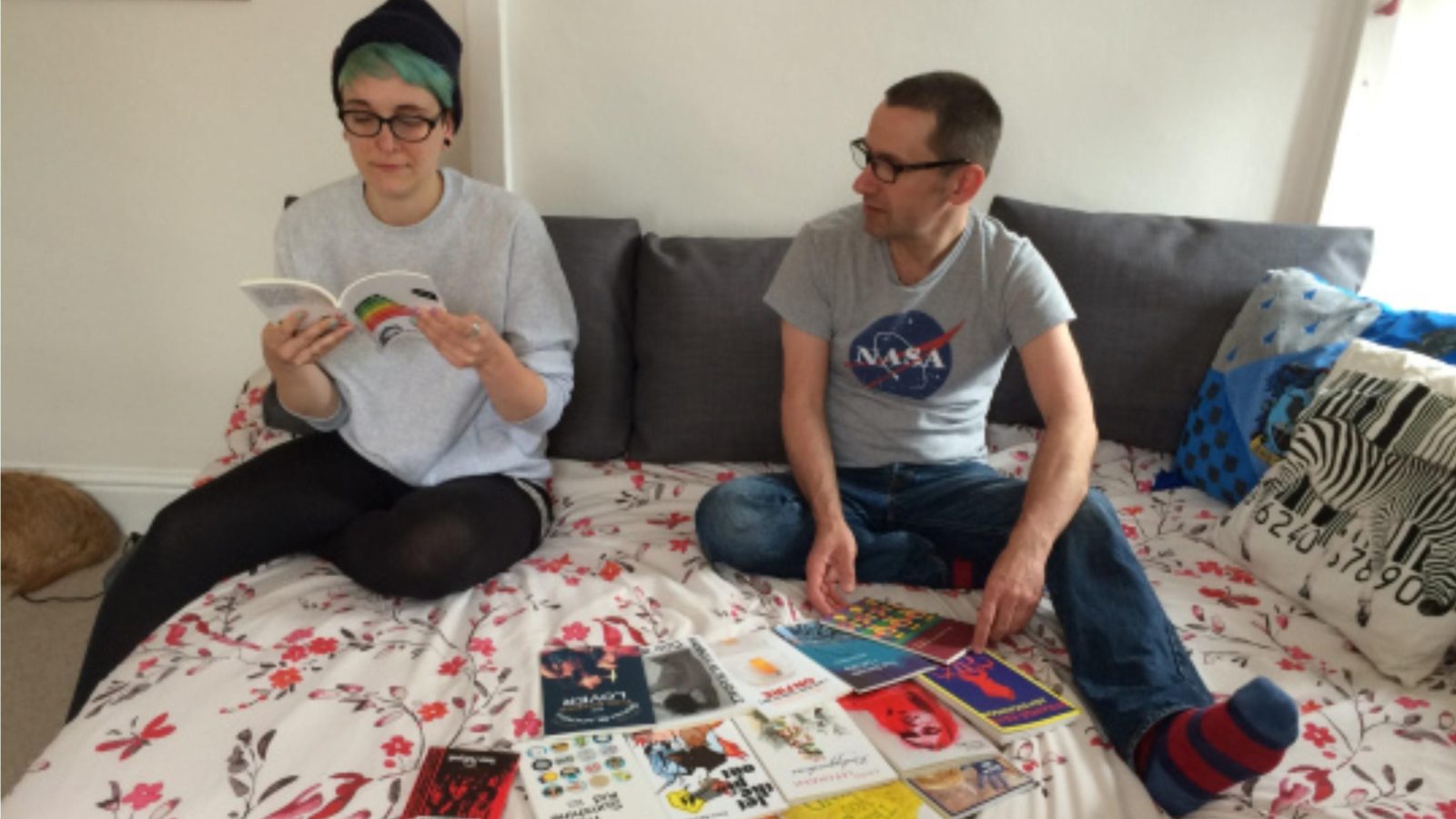 Award winning Bristol-based publisher, Burning Eye Books, is one of very few UK publishers specialising in performance poetry. Run by Clive Birnie and Jenn Hart, they have published more than 60 collections since they began five years ago and have established a great reputation for publishing leading poets and performers. Julie Fuster met up with Clive and Jenn to find out more about their ethos and a very recent milestone publication.

What made you start publishing performance poetry?

Clive: In 2011 I was running a few events with a friend of a friend in Portishead and performing my own poetry. One day someone told me “You have been around like for ever, you should have a book ! Why don’t you have a book?”. I realised that there was no such thing as a Spoken Word poetry press. Originally I thought I would start a poetry magazine like Poetry London or The North, all those magazines you can find around the country. Then I met Ash Dickinson and that was pivotal – I realised how big the Spoken Word scene is in Bristol and I started a mental list of people. I was thinking about putting them in the magazine and but I realised that what they really needed was books. And it all came from there, really. So I wanted to create that catalogue that I thought had been missing but also to create something that would give newer poets, younger poets coming through, an opportunity to get published. I started it in 2012. Two years in and it was already taking off and I wanted to turn the volume up, so I hired Jenn.

Only two of you are doing everything, from finding the poets, to the editing, the design, the marketing

Clive: Tom Chivers, who runs poetry publisher Penned in the Margins, once said in an interview: “We are a bedroom press run on strong coffee and enthusiasm” and Jenn read this and said “That’s us!” because Burning Eye is essentially the spare room in my house. But, Burning Eye is a virtual company, it is mostly a group of freelancers who converge to contribute to projects.

Jenn: We are politically conscious people and we feel it is important to publish many different types of people. We have a policy of publishing at least 50% female poets. We want to publish poets of different ethnic backgrounds, people with disabilities. A magazine in London did a Pride list of the top-twenty recommended novels, short stories, poetry books by LGBT writers and we have six of our poets on the poetry list ! We try to curate a list that has a bigger story to say. But we don’t necessarily put this out as a mission statement. We want our politics to come across in the work that we produce.

Where do you find the poets you publish?

Clive: Obviously, a lot of people we publish are very involved in the poetry world themselves. We hear about other poets from the poets we already publish. And we go to festivals in the summer. One of our favourite things is to approach poets that we like and say “We would like to publish you, do you want to submit a manuscript to us?” Sometimes we run an open submissions period – we’ve done it twice and each time we discovered people whose work we did not know. And we are judges at some slam competitions. Clive has been a judge at the Edinburgh BBC Contest, Jenn judged Superheroes of Slam a few weeks ago. We find people through those kinds of events, not necessarily the winners, but we keep an eye on people, because some of them are young, unpolished poets with great potential. 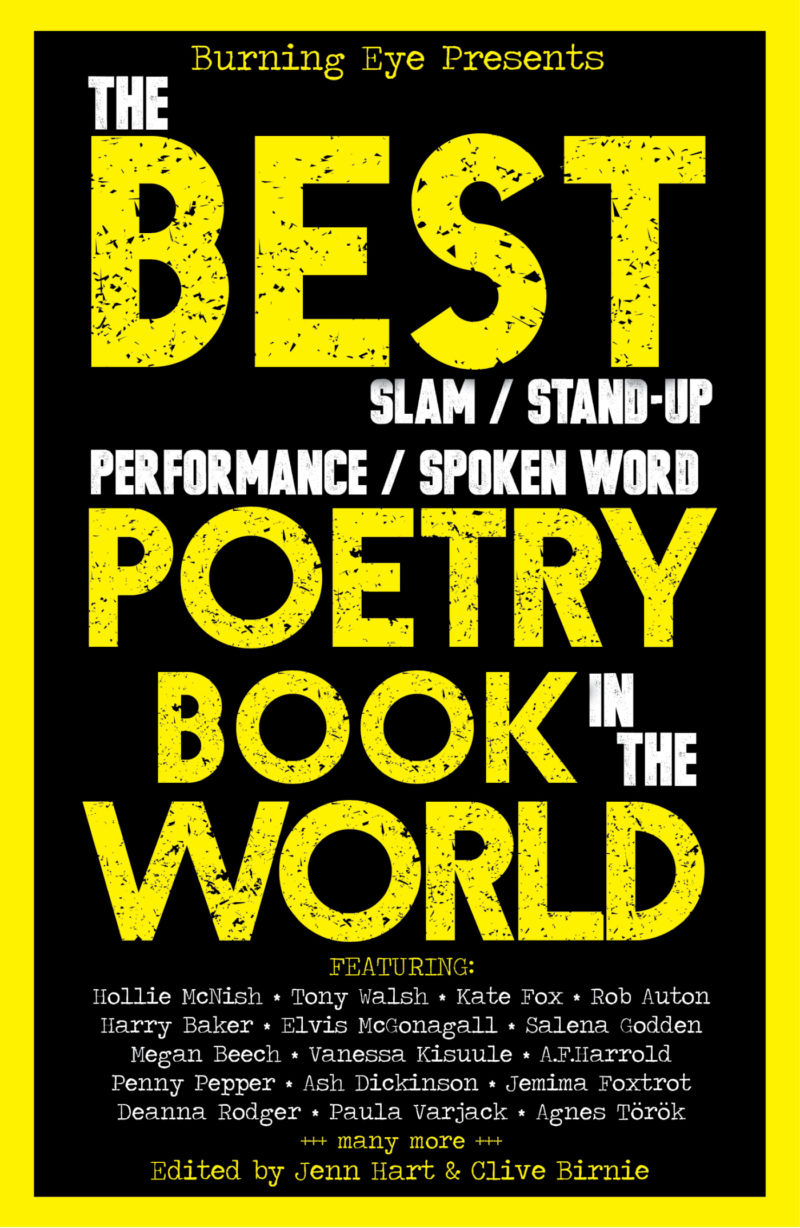 Are there any specific elements to publishing performance poetry ?

Jenn: The work has to present the live version of the poem in the best possible way, without re-writing it, without changing it too much. Because it already works on stage, we want to transfer that live experience. What we try to create is “the book of the show”.

Who are your bestsellers?

Jenn: Our Top Five are: Harry Baker, Hollie McNish, Salena Godden, Tony Walsh ( we sold a lot because of the exposure after the Manchester attacks), Vanessa Kisuule and then Megan Beech. And we are proud to say that we published Hollie before she became cool. It is nice to be able to say that we published her first book. Actually it was her second, but Mathematics which is one of her most famous poems, is in the Burning Eye book.

What are the next projects at Burning Eye?

Clive: An anthology called The Best Poetry Book in the World with the best of Burning Eye from the 5 past years, has just come out. We will also have a new collection from Agnes Török coming. Next year we want to publish 32 books and we will hopefully do more events and festivals. We are a performance-based press, so it is important for us to be a part of that.

The Best Poetry Book in the World is out now: burningeyebooks.wordpress.com/2017/09/29/the-best-poetry-book-in-the-world-burning-eyes-first-anthology/