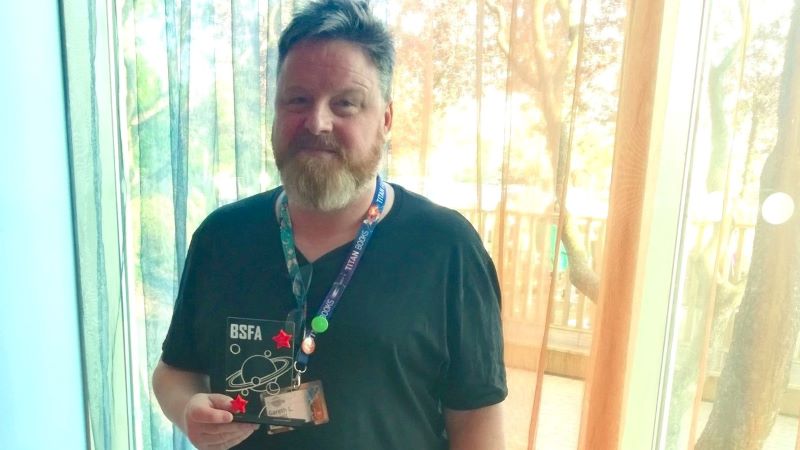 Gareth L. Powell’s status as one of the UK’s most popular and respected science fiction writers has been further confirmed after the Bristol writer was announced as the winner of the Best Novel category at the annual British Science Fiction Association (BSFA) awards.

Previous winners of the prestigious award include legendary writers such as J.G. Ballard and Arthur C. Clarke.

The BSFA awards are voted for by BSFA members and members of the British National Science Fiction Convention, Eastercon. The latter has been held over the Easter weekend annually since 1955.

Powell won the award for his novel, Embers of War, which was published last year and is the first part of a trilogy. The Guardian called the book “A compelling and satisfying whole”, while the British Fantasy Society said, “It’s hugely entertaining, and hints at a wider universe with the tantalising prospect of filling a Banksian (Iain M Banks) hole in modern sci-fi.” Powell won the same BSFA award in 2013 for his novel, Ack-Ack Macaque.

Of this year’s triumph, he says: “I am delighted and very honoured to receive this award, especially as it is voted for by the fans — the people who read and enjoy the books.”

Gareth L Powell’s latest book is Fleet of Knives, the second volume in the Embers of War trilogy. It was published in February 2019

Gareth will be appearing at Redland Library on May 9 https://www.bristol247.com/whats-on/books-and-spoken-word/science-fiction/books-science-fiction-bristol/, and at Storysmith Books on May 15 https://storysmithbooks.com/events/tim-clare-gareth-l-powell/