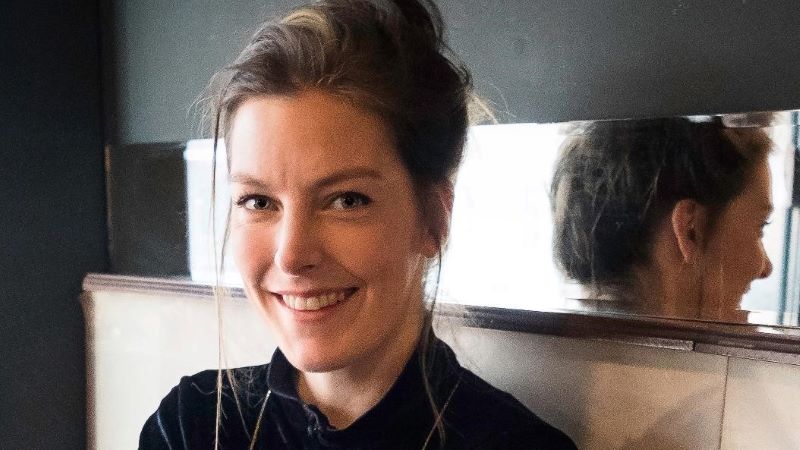 Caoilinn Hughes’s debut novel, Orchid & the Wasp, has received an amazing reception since it was published last year. The writer David Vann called it “an entirely original novel, dazzling and beautiful, disturbingly cold and insistent”, while the Times Literary Supplement declared it “A remarkable, propulsive debut novel … No precis can adequately convey the novel’s startling, impressionistic prose, nor its corrosive humour. Jewels of observation glitter amid the earthy gags. … Exuberant … it zings with energy, ambition and daring”.

Set in Dublin, London and New York, the novel recounts Gael Foess’ attempts to save her family after her father leaves them in the aftermath of the 2008 financial crash.

Ahead of her appearance at Spike Island on July 11, poet and novelist Hughes talks about the novel, writing women characters and late capitalism.

Do you take different approaches when writing poetry and fiction?

The poem is a highly responsive form, with each word, line, image or idea recalibrating what the poem wants to do; what shape it needs to take. I have never heard of a poet who designs a poem and then writes it, but I have heard of novelists who do this. I can’t.

When I suggest that the poem designs itself, I don’t mean it comes unmediated from above! Just that the process has far less to do with planning than it has to do with honesty, curiosity and alertness. Unless you set out to write a sonnet or sestina, you’re generally listening for what form the poem wants to be, what it wants to say, and how. This fact lands all poet-novelists firmly in the camp of writers that Zadie Smith calls ‘micro managers’, who tend to write into the dark, not knowing where a novel will lead them, but writing slowly enough (and editing as they go) that they arrive somewhere they could never have designed, aimed for to begin with.

In the sense of finding form for content, I approach both poetry and fiction the same way. I started out writing poetry, so I’m practiced in writing very slowly (I also read extremely slowly) and editing exactingly. For me, prose is easier to sit down and work all day at, but the risk of failure grows and grows along with the investment of time, which is terrifying! Poetry is less terrifying investment-wise, and has more of the immediate reward about it, but it’s less manageable and predictable.

You’re often mentioned alongside Sally Rooney as part of a new wave of Irish writers. How conscious are you of your contemporaries and their work when you’re writing?

When I’m writing, I’m only conscious of the story I’m trying to realize. Getting to that place takes significant self-control and self-belief, and if you get there, you have to hunker down. Writing is an all-consuming activity or (for me) it’s not really writing. It’s faffing around. That said, most of the time, I’m faffing! So I have plenty of time to be conscious of my contemporaries, and I am because I read them.

I love reading contemporary fiction. If I wind up reading two average books in a row, I return to trusty oldies to stay inspired about what stories and novels can do. But it’s also true that I can find that ambition and inspiration by reading contemporary fiction. Excellent books are being written, even if those books sometimes don’t find readers.

Take a book like Will Eaves’ Murmur or Anna Burns’ Milkman or Maggie Nelson’s The Argonauts. Those books, which presumably didn’t have an enormous marketing budget before they started winning prizes, could so, so easily have disappeared. It’s a delusion to think those books are all rising to the surface. Dear readers: Talk long and hard to booksellers, and don’t just buy what’s on the table. Then reward the booksellers and undermine neoliberalism by buying several books of which they only have one copy! 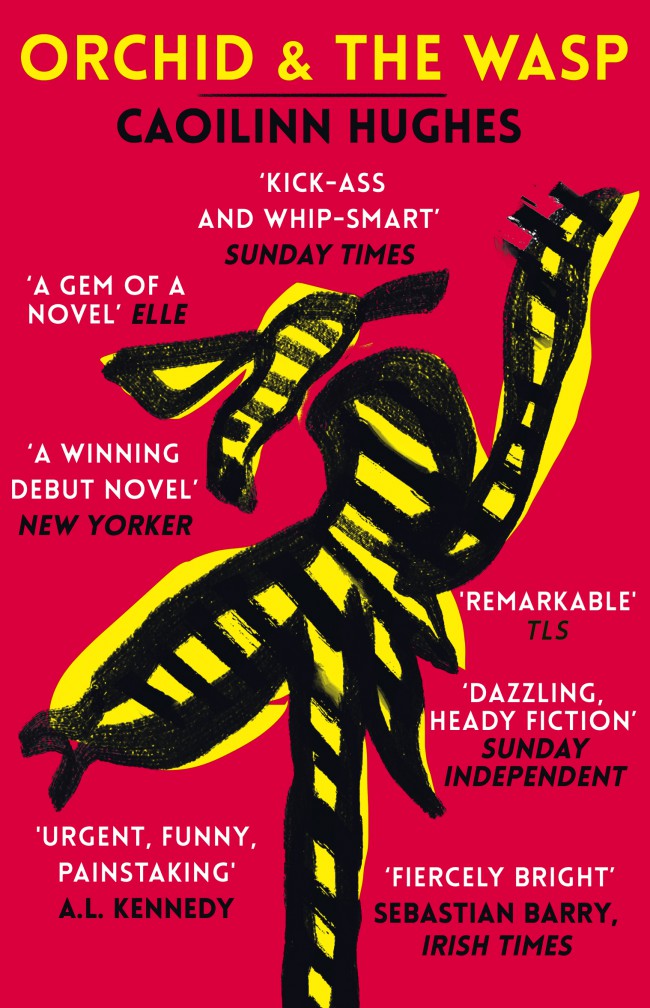 Acclaimed writer, Caoilinn Hughes will be discussing her debut novel, Orchid & the Wasp, at Spike Island on July 11.

Gael Foess, the main character in Orchid & the Wasp, has been widely praised for being a very original creation and “her own woman in a way we don’t see often enough in books”. What do you hope readers take from Gael’s story?

As I wrote Gael’s character into being, I saw that I was writing a book about a woman out in the world. If she had relationships, they wouldn’t form the engine of her narrative. It would be herself – her mind, ambitions, ideology, interests, actions – that would drive the story and the reader’s interest, not in the context of anyone else. That is to say, the novel would be a novel of ideas, or a philosophical novel, or a state-of-the-nation novel, rather than a coming-of-age or a love story or a quest novel in which the heroine triumphs by discovering her inner strength etc.

So many books that excited me when I was in my twenties were about individuals out in the world, up against it, exploring it, getting their kicks, doing stuff. Frankenstein. Endurance. Candide. The Picture of Dorian Gray. Things Fall Apart. Steppenwolf. Heart of Darkness. The Places in Between. The Stranger. Money. The Trial. Pale Fire. The Unbearable Lightness of Being. The Master and Margarita. The Old Man and the Sea. A Portrait of the Artist as a Young Man. Mostly books by men, about men.

When I came to think about picaresque novels involving female characters (Emma, Vanity Fair), the engine of the narrative always had to do with pursuit of a man/marriage. There were virtually no equivalents that I could find; books in which women’s careers, ambitions and ideas drove the narrative. Dave Eggers’ The Circle is one, Siri Husdvedt’s The Blazing World is another. After months and months of searching, I could only find a handful.

The protagonists I mean aren’t heroes or role models with hearts of gold, nor are they sociopaths. They are in the murky middle: realistic characters, occasionally funny, relatable, admirable and impressive; occasionally duplicitous, hypocritical, self-serving and ungenerous who don’t necessarily meet with comeuppance for their poor behaviour.

I discovered that whenever you have a female character in this category (not a role model/ heart-of-gold heroine), she is almost always given trauma to help the reader sympathize, offset her unlikeability, and she usually meets with retribution. (I wrote about this here)

With Orchid & the Wasp, I wanted to allow the book to be driven by the protagonist’s deliberations, movements and actions over and above her ties, troubles and community. Gael has come of age on the first page of the novel. I wanted to pay heed to her mind and drives in preference to her love interests and vulnerabilities. The more complex themes of the novel arose from Gael’s complexity, and from her grappling with her own privilege and cynicism … which might not be as palatable as grappling with one’s self-doubt, but we do not live in a palatable moment.

In an essay, you stated: “We should want more for our literature than troubled, traumatized, love-obsessed, murderous or agreeable women.” Which writers do you think write the strongest women characters?

That depends on what you mean by strongest. I don’t believe there’s a dearth of strong female characters anymore, thank goodness. However, the majority of them are heroines. Imagine if the representation of women in books and films were a proportional representation of real life, there would be a hard-core heroine on every corner!

I fear we flatter ourselves, and, to me, this is a very serious issue of our age. As soon as we have females who aren’t clearly role models in their thoughts and actions – ‘strong’ or otherwise – they’re usually given trauma, included in the narrative.

Of course trauma is a huge aspect of human experience and it is hard to avoid, but whether or not it is necessary to include in a story is questionable: is it there to justify the character’s complexity? To help the reader empathize? Is it driving the story? Why do we not necessarily need or get that component in male-led books?

It becomes conspicuous, especially in books by middle-class white women, given the problem of internalized misogyny white women are grappling with. What lie are we telling ourselves, and to what end? Why do we reinforce the double-standard, even in our imaginations? Readers read character-driven books for interesting characters. That arena is still so much larger for male-led books.

You have also said that “Orchid & the Wasp is a novel about the lack of ambition in late capitalism”. Which factors in particular do you think have created this lack of ambition?

Ah! You’ve left out two crucial words—which I find fascinating! I said the novel explores ‘the lack of room for ambition’, which is something quite different to a lack of ambition.

This is very much the subtext of the book, so I won’t say too much, so as not to spoil the reader’s engagement with the story. But the character comes to realize (and to prove sickly to herself) that in order to succeed in late capitalism, one needs privilege, first and foremost – so that privilege should be protected at all costs – coupled with a willingness to be morally adaptable.

She comes to learn that meritocracy and freedom of opportunity and egalitarianism are myths, which leaves her in a very difficult position, as people in her life wind up losing, or forfeiting, some of their privilege & succumbing to downward mobility.

One of the questions that drives her is whether or not a good life itself is a fallacy, and if there is no such thing as earnest ambition, when the system one would have to realize it within is so warped. If, then, a person’s ethics and actions are ultimately irreconcilable. Cynicism had a sizeable moment in the past decade (perhaps we have moved on to despair) and there aren’t so many novels exposing it, but it is part of our story. Albeit, heroism is easier to sell!

Caoilinn Hughes will be appearing at Spike Island on July 11 discussing her acclaimed debut novel, Orchid & the Wasp. For more information, visit www.spikeisland.org.uk/programme/events/novel-writers-caoilinn-hughes/