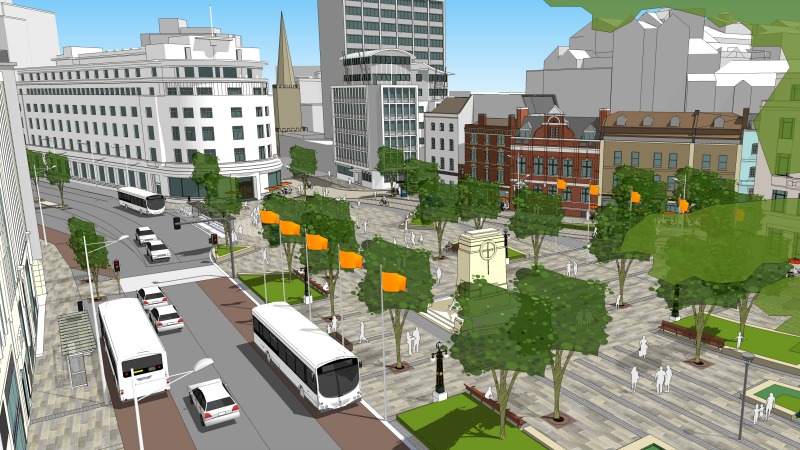 I recently took a family day trip to Bourton-on-the-Water and we went for lunch in one of those quaint little tea shops. The walls were littered with artefacts from a bygone age, the most striking of which was a painting (which I assume dated from the Victorian era) of what is now known as the Centre Promenade or “the fountains”, open for sea vessels as a continuation of the river through the heart of the city.

The engineering difficulties (and costs) of re-opening a watercourse of such grandeur are many, but the spirit of the piece made me reconsider what a joy it must have been to stroll along the docks as a pedestrian, crossing bridges and idly making your way around a living, beating, industrious heart of the city, without the need to constantly stop for a charge of oncoming motor vehicles.

It is worth just pausing for a second to look on the bright side. This fascinating piece by Adam Smith describes the pedestrian dystopia Bristol city centre could have become if transport planners had got their way in the 1960s. (If words aren’t your thing, here are some striking images of our alternate history.

Bristol city centre, I think it is fair to say, is being choked by vehicular traffic movements – buses, cars, vans, and sometimes even lorries. Besides the first exception, it is my contention – and the stated aim of campaign group Living Heart for Bristol, formed by UWE transport research expert Steve Melia – that the health, economic and climatic future of the city and its citizens are best served by redesigning the road scheme so that all road vehicles – bar buses and bicycles, emergency vehicles and blue badge holders – must turn around.

Business deliveries would of course be permitted, but in short, we should close all roads inside the inner ring road (Bond Street/Park Row/Jacobs Well Road/Hotwell Road/Brunel Way/Coronation Road/Temple Gate & Way) to through-traffic.

I recently blogged about the ridiculous Conservative motion to recent Full Council meeting that called for a large car park to be sited next to the Arena, despite the fact that the South West’s largest transport interchange is already, well, sitting right there.

In a further development at Tuesday’s Cabinet meeting, I asked the Mayor whether the land acquired by the council next to Temple Meads (currently an abandoned car park) could be used as a bus interchange. The gnomic response from George Ferguson was “in principle”, which gives us some hope that a key Green Party campaign ask of the last seven years could be delivered. (On a related note, Green Party activist Glenn Vowles has just started a petition calling for a Green Arena for a Green Capital which I urge you to sign and share with others.)

The disbenefits of allowing private motorised vehicles to move across the length and breadth of the city centre are many. European cities – particularly those who have taken the title of European Green Capital, which Bristol currently holds – have learned how to make central plazas into thriving hubs for restaurants, cafes, kiosks and small businesses. They draw thousands of people into an area where they would like to be and keep them there for hours on end, spending money in local businesses and enjoying their time.

Outside of the main pedestrianised shopping precincts of Cabot Circus and Broadmead, Bristol’s city centre lacks so much pedestrian “legibility” (i.e. ability to join the dots while walking) that it’s no wonder people take to their cars rather than take in the sights that a walk allows.

Bristol has to consider the effects on health outcomes and our emissions targets. In 2014, Public Health England (PHE) published a snappily-titled report called Estimating Local Mortality Burdens associated with Particulate Air Pollution. If you look on page 17, you’ll find that PHE estimate Bristol had 196 deaths attributable to air pollution in 2012. It isn’t all coming from vehicles emissions, but it contributes – and we must acknowledge that it probably isn’t people in the suburbs who are worst affected.

The Guardian also recently reported on this worrying trend, with their major analysis being that the global industrial shift from petrol to diesel car production in the 1990s has cost us dearly in terms of particulate air pollution – and our health. Greens have been campaigning on air quality issues such as this since the 1980s.

So, if you agree with me that vehicular movements need tackling, how do the Living Heart suggestions fit with current plans? The controversial Metrobus scheme brings a re-design of the centre promenade area.

Should all these roads be closed?

The downside is the plans would draw Baldwin Street out across what is now the centre promenade to create a new road space for cars connecting to Park Street. The upside for bus drivers, cyclists and pedestrians attempting to navigate the centre will be that that the nightmarish figure-of-eight traffic flow will be stopped up, creating a new public space surrounding the Cenotaph.

If the mayor and Bristol’s transport planners are thinking what I’m thinking, then the Baldwin Street link is a temporary ploy and has the potential to be stopped up after the Metrobus development is completed.

This would create a long, central plaza from the Cascade Steps all the way to Electricity House, and it would be the first step to diverting vehicles away from this area (buses and bikes excepted).

It may not herald quite as graceful and serene a scene as the old river winding its way through – but it’s a start.