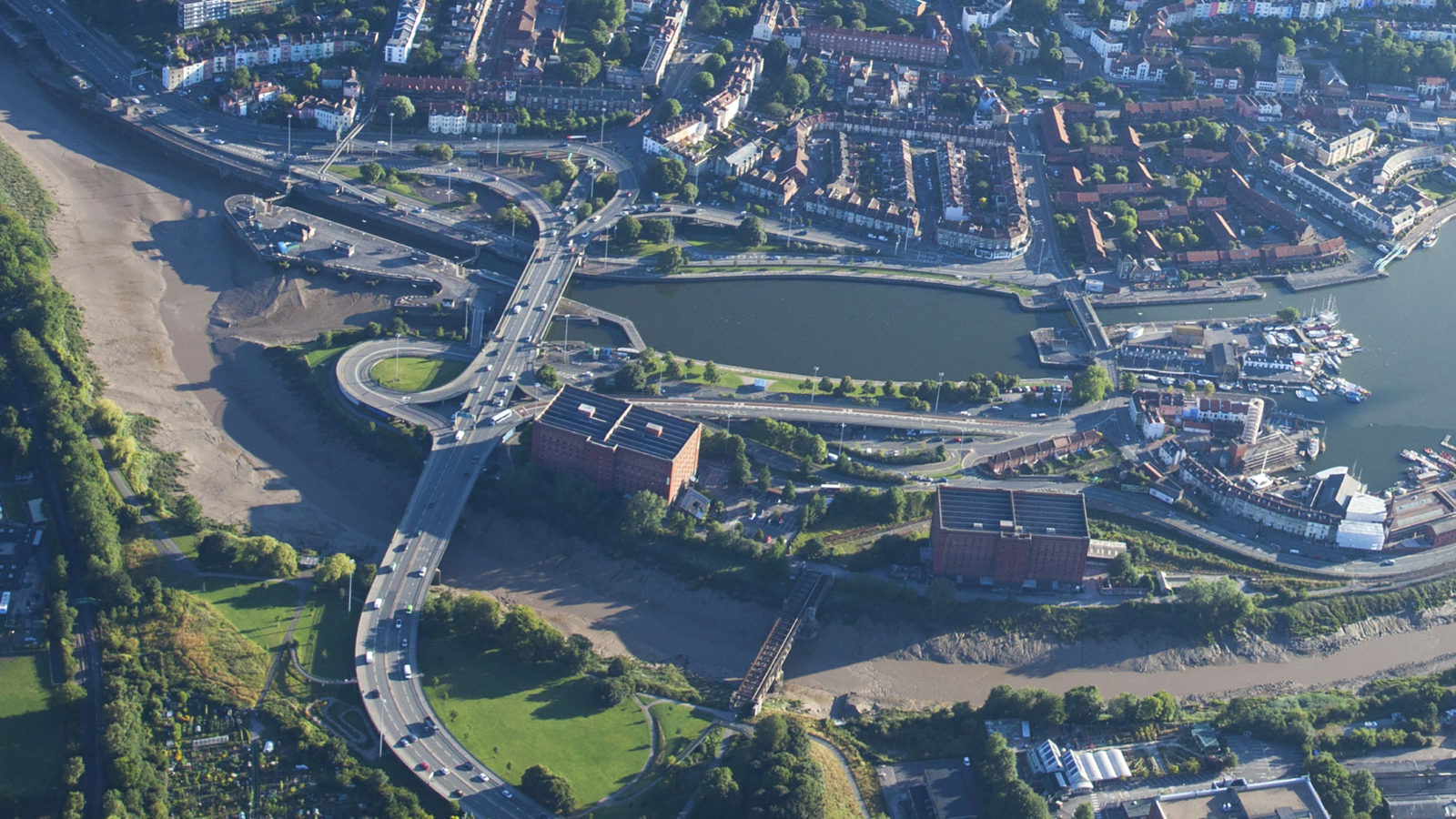 The following is Bristol Civic Society’s response to the Western Harbour engagement consultation:

The Society shares the Council’s vision to simplify the Cumberland Basin road system which was constructed in a former planning age that championed motorway-style urban road systems.

We support the ambition to release highway land to develop a new city quarter with space for new homes, with ancillary infrastructure that includes high quality public green open space and improved and safer walking and cycling routes.

The public discussion that the Council wishes to promote involves one of the most visually sensitive and publicly visited areas of the city. The view up the Avon Gorge of the suspension bridge is internationally famous, it is the most often recognised image of Bristol. The elevated roads of the 1960s configuration harm the quality of the views and setting of the Clifton Suspension Bridge, the Avon Gorge, Ashton Court and Bristol Harbour.

The three options would all involve significant interventions and consequences for the surrounding landscapes, townscapes, resident communities and green spaces. All options would have as great an impact as the 1960s road construction. Any road scheme can only mitigate the effect on the surrounding environment of traffic noise and emissions. 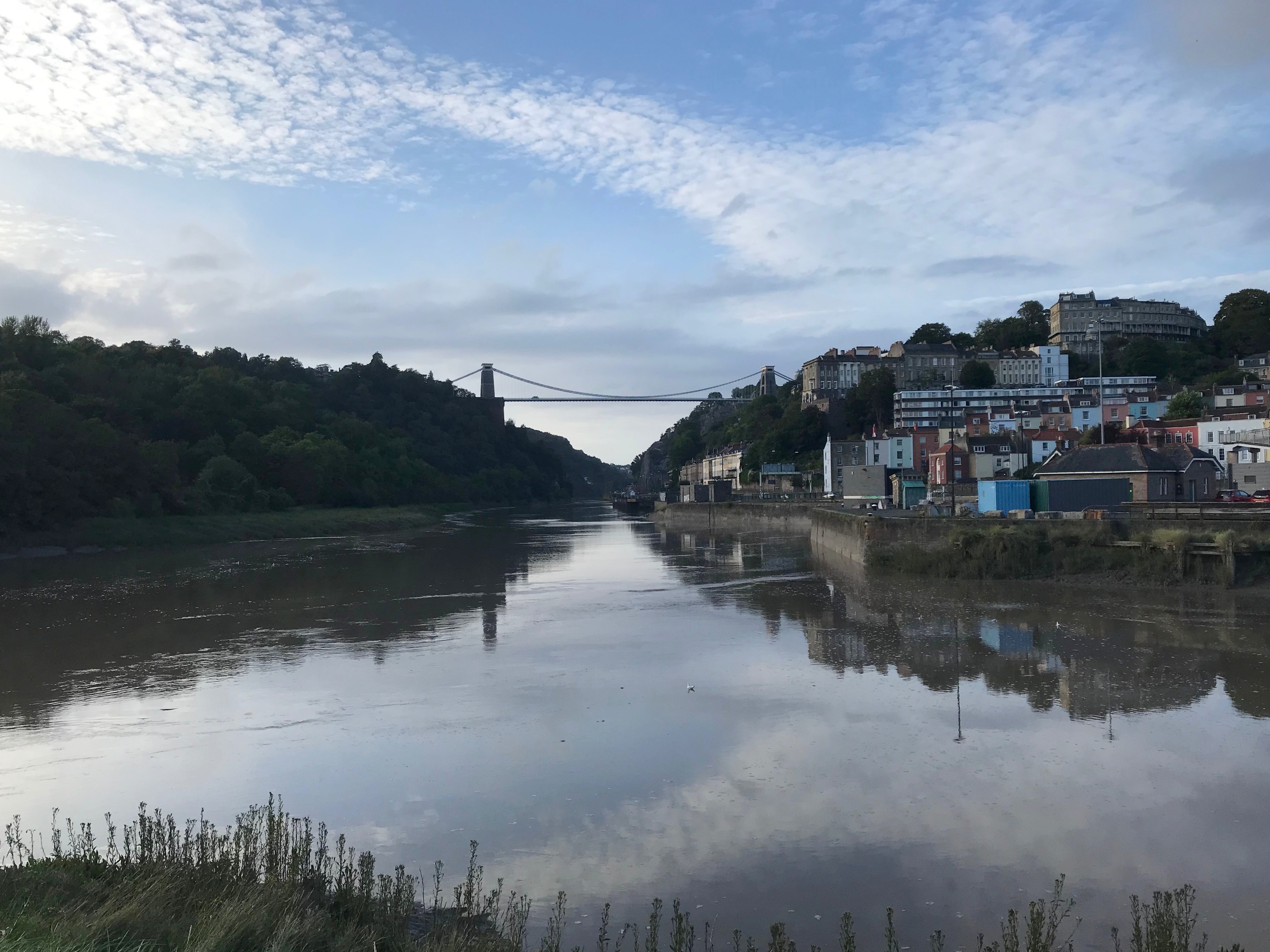 We support the stated intention to prioritise walking, and cycling and bus networks in the area, and accept a slightly reduced capacity for private motor traffic in the road network. However, there is no information on how that might be achieved

“The aim should be to set out options or choices that are possible in the way that specific development is carried out… Purely oral or written presentations should be avoided so that, wherever possible, options are illustrated in 3 dimensional terms with models.”

If this was intended as a formal consultation, it does not reflect best practice:

2. The plans include only a low level of detail limited to transport routes. The pink lines understate the proposed road widths. To respond effectively the public needs information about which routes work better and how walking and cycling can be segregated from motor traffic. With the level of information provided, the public cannot understand critical matters for example, the effect of each of the proposals on nearby communities.

3. The current consultation relies on simple diagrams of new roads. Without some attempt at computer visualisation of the completed schemes the public will have no understanding of the final appearance of any of the options. There will be no understanding of how the area will be transformed by new roads and new building.

Without this information the public response will be uninformed. The consultation is a wasted opportunity. We are confident that if a private developer offered any of these transformative proposals in the form of this consultation, it would not receive Council support.

Early consultation before decisions have been made is welcome, but the consultation will serve only to raise strong public opposition to all of the options. The stated purpose of the consultation is only to seek views on some ‘early concepts’, but even so the option of retaining the current alignment should have been included, so that the public could assess which of the four routes is best, balancing:

No explanation is given of the development timeline. There is no explanation for the long delay of this consultation, which the Council chose to publish during the August holiday period.

The road plans need to be presented alongside a high-level plan for the projected 2500 homes and other new development. Whatever the road alignment, there is a limited amount of land, and development is constrained. We suspect that the what is proposed for the new “city quarter” may be too dense or too tall to make it liveable, or too close to noise and pollution from high traffic flows, or unsuitable in design for this environmentally sensitive conservation area. The plans should be published to allow the public to make a judgement on this. 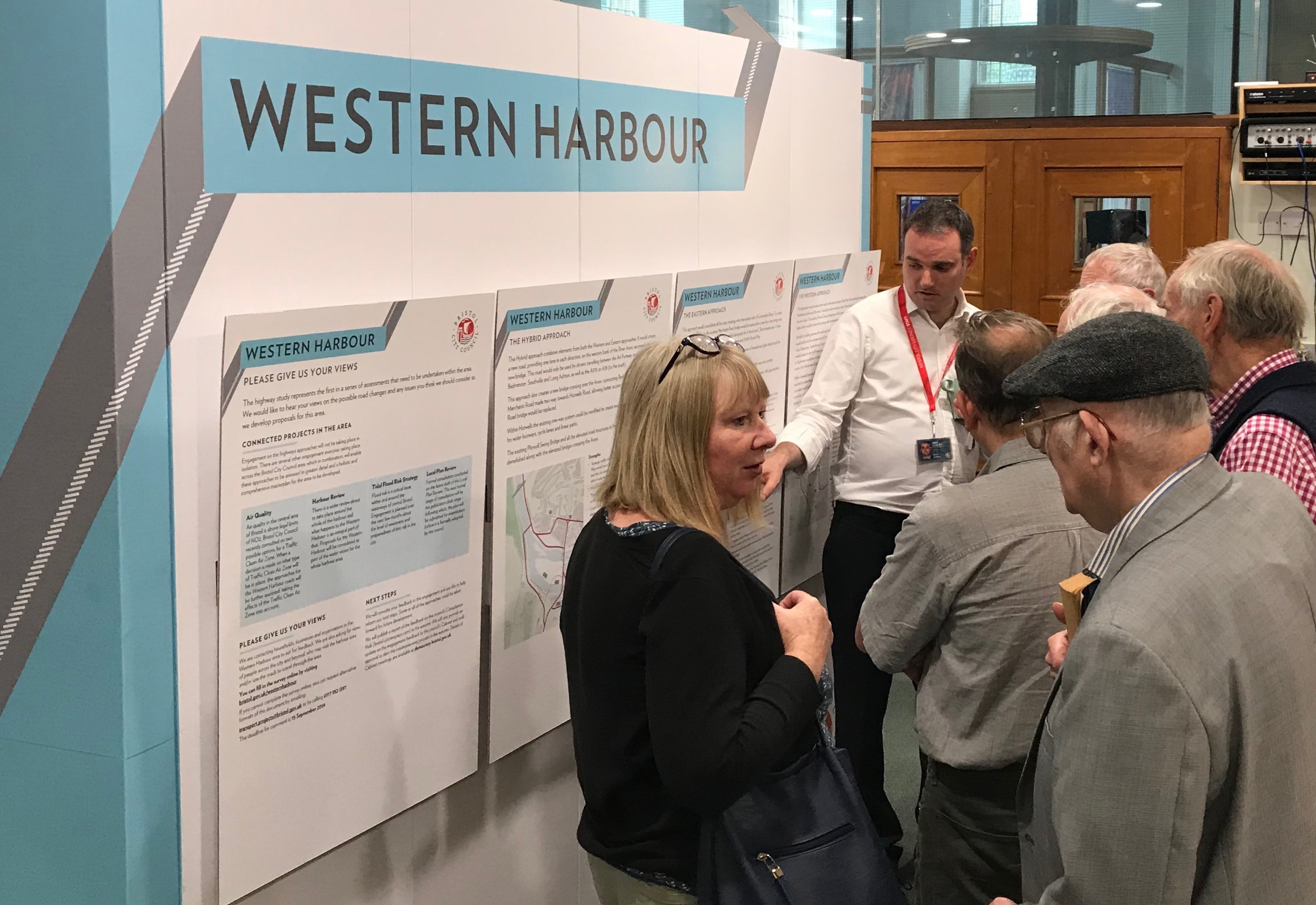 From the information provided it is not clear whether there is enough space between the western bank of the River Avon and the railway embankment to construct a new road which we assume must be at least four lanes wide with separated space for pedestrians and cyclists and high enough above the river to escape flooding. The consultation gives no visualisation of the impact of a high-volume urban road with a four-lane river crossing on the views of the natural landscape of the riverbank and Rownham Hill and on the setting of the Avon Gorge and the Suspension Bridge. The bridge would be a substantial concrete block across the Gorge. It must support at least four traffic lanes plus cycle and footpaths. The bridge piers would need heavy duty river barriers to protect them against collision from ships. We ask whether the presence of a new bridge so close to the docks entrance could present navigation problems? The curve of the swept path of a multi-lane road on the western approach to the bridge implies a vertical cut in the Gorge’s rock face or that the road would enter the river.

It is probable that this option will prompt such extensive opposition to make it unprofitable to discuss any further the proposal’s strengths and weaknesses including the reduction of resilience of the city centre road network during bridge opening. We can foresee national opposition to the impairment of this internationally recognised view by well-funded, knowledgeable and articulate opponents.

Though this alignment passes through local parks, businesses and housing and the noise and pollution will afflict several visitor heritage assets; this option appears to have a lesser impact than the Western Approach but needs testing against these questions:

The consultation does not discuss the consequences of the upgrade of Cumberland Basin Road, Merchants Road and onwards to high-volume traffic use. Equally unclear is the connection to Coronation Road and to Clift House Road. How could this option be designed:

This approach involves the same weaknesses as the Western Approach and the same questions as the Eastern Approach, save that it has two crossings to support resilience. 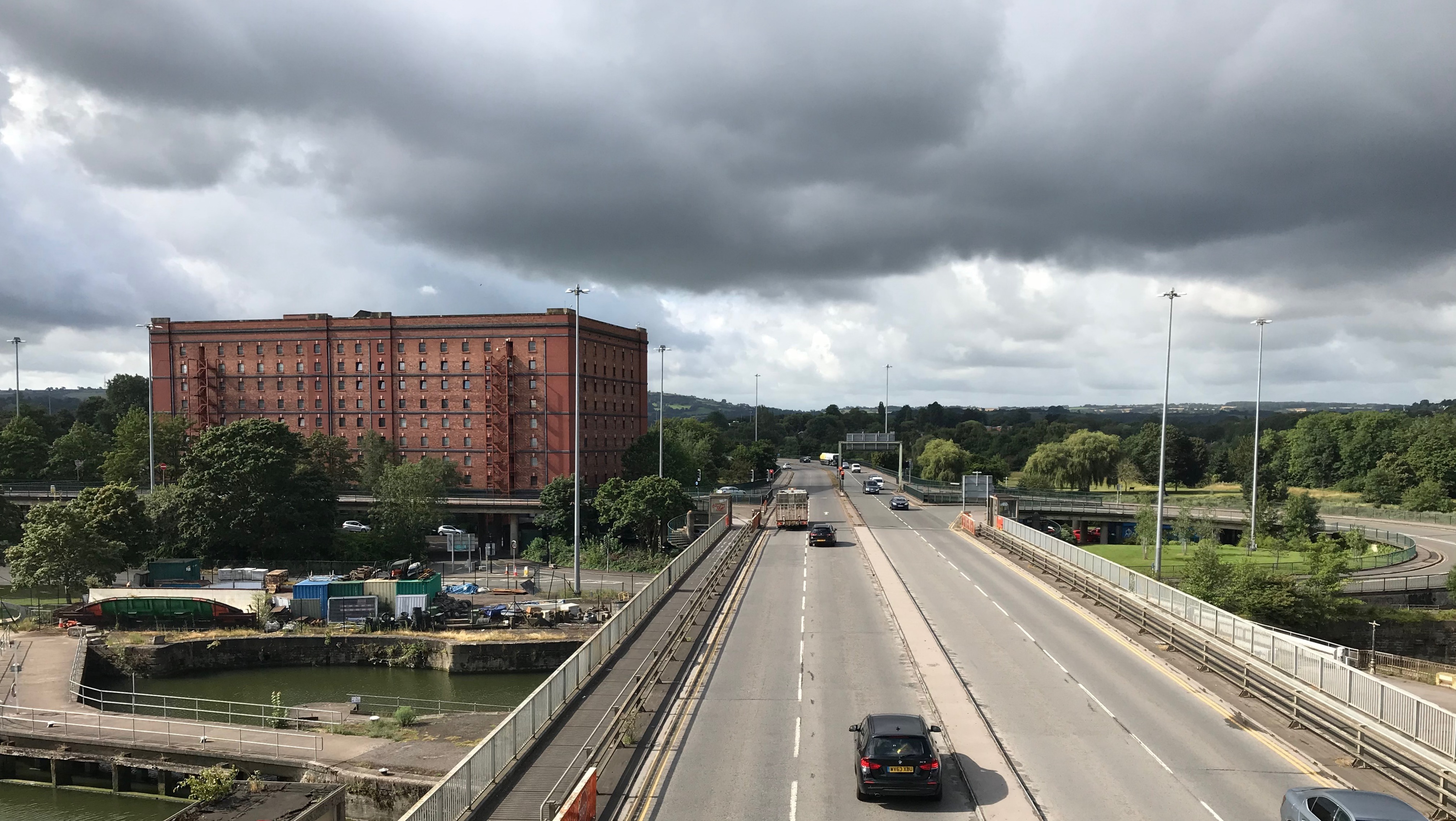 Plimsoll Bridge would be removed as part of the three published Western Harbour options – but is there another way?

About 15 years ago Arup published a report that offered a simpler and cheaper scheme. In 2011, Business West published ‘High in Hope’ that too contained a vision to enhance the Cumberland Basin and to replace the elevated roads with ground level roads and a low-level crossing incorporating a lift-bridge whilst leaving the west riverside green. The Society would be surprised if the unpublished 2019 Arup Report does not contain a similar proposal(s). The consultation should have presented and assessed this option(s) with the three ‘transformative’ options. To demolish several of the slip roads would cost less, could simplify and reduce the land occupied by roads and have a lower impact on the landscape to the west or the residential areas to the north and east.

Inevitably, cost will determine what is possible. The more modest proposal has a better chance of delivery than the more expensive, transformative options. The consultation states that “the Mayor has not ruled out the option of repair and remove redundant ramps”. This option would provide space for new housing. The upgrade of the landscape would provide the opportunity for extensive tree and other green planting to moderate traffic emissions.

The Society considers it unwise to propose options for the Western Harbour that would cater for strategic traffic flows that an M5 to A370 link would take further south. A lower key response, possibly the fourth option would be a more prudent approach to releasing development land at Western Harbour until the issue of the M5 to A370 link is resolved.

As it stands, the options put forward would require massive investment in roads with unacceptably adverse impacts on world famous views and the quality of life in and around Western Harbour that later development may make unnecessary.

The consultation is unsound because:

Bristol City Council’s initial Western Harbour consultation closes on September 15. To give your views on the plans, visit www.bristol.citizenspace.com/growth-regeneration/western-harbour