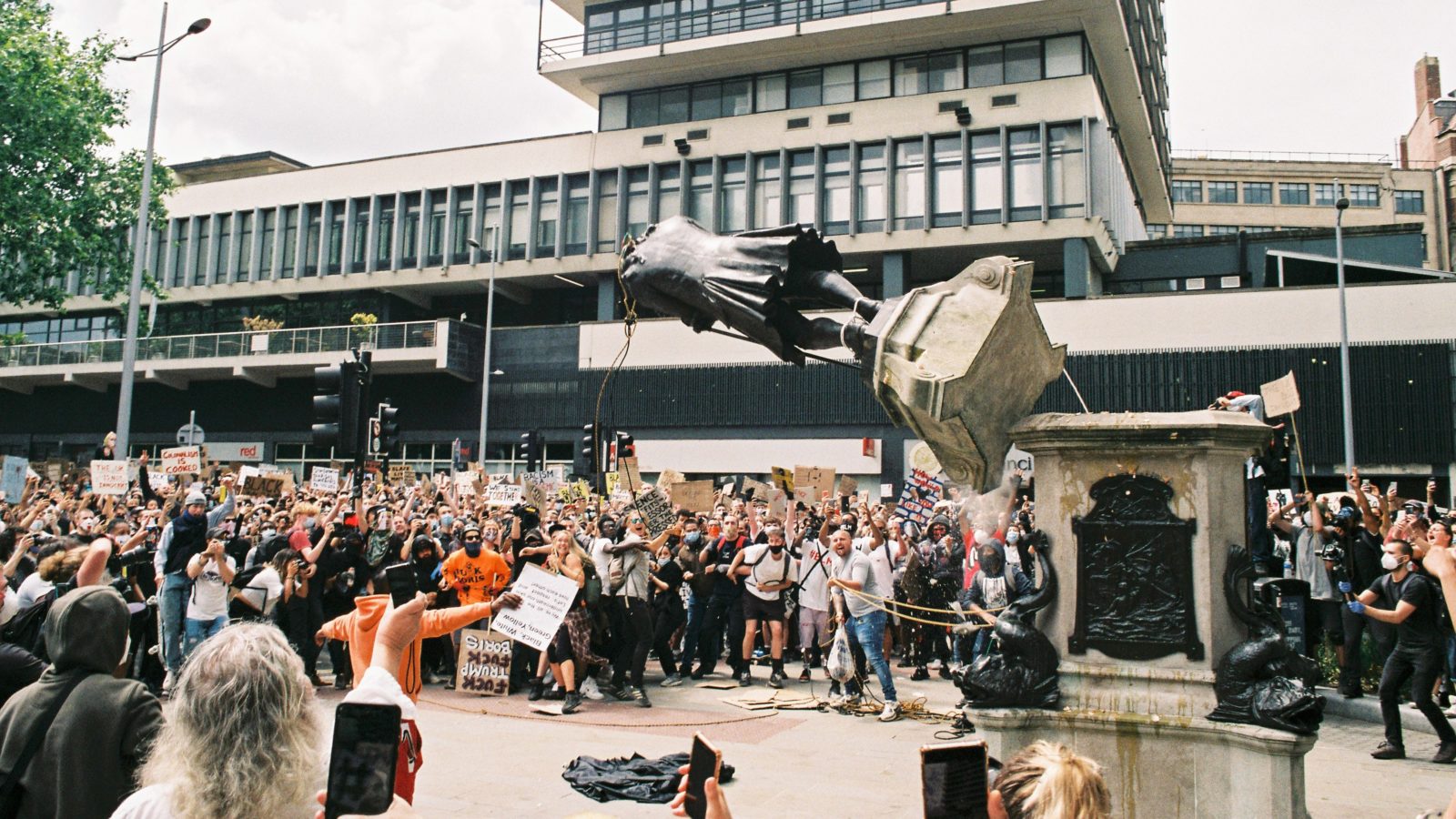 What’s interesting over the last few days is that when I speak to friends who live outside Bristol their initial reaction is one of baffled amazement.

“What? There was a statue of a slave trader slap bang in the centre of the city?”

Then you have to explain carefully and painstakingly about the peculiarity of Bristol, the head-in-the-sand attitude large swathes of the city establishment has had about its past and the weird quasi-religious personality cult that grew up in the 19th Century around Colston.

As Mark Steeds and Roger Ball explain in From Wulfstan To Colston, this was something deliberately fostered by the people who ran Bristol at the time and was regarded with, at best, a sort of neutral detachment by most ordinary folk.

The statue was NOT paid for by the people of Bristol. It was largely foisted upon them. And now they have taken it down.

And what a glorious moment it was.

Watching the pictures on TV of the crowds of black, white and mixed race young people pulling it down and rolling it into the dock I felt a mixture of emotions.

On one hand, I wished I could have been there and been part of this huge moment in the city’s history. I felt inspired by the courageous souls who actually carried out the act.

One of the wonderful things about the current Black Lives Matter protests and their ENOUGH IS ENOUGH approach to systemic racism is that they’re so clear and confident and make all those gradualists, all those who would roll their eyes and go ‘ye-es, but you have to look at it from both sides…’ look like a bunch of weedy equivocators.

It also, I have to say, reflects badly on my generation.

I’m 50. I moved to Bristol when I was 22. As soon as I learned about Colston, his deeds and the fact that there was a statue of the guy pride of place in the centre I knew it was wrong. We all did. But what did our generation do about it?

Things moved at a tortuously slow pace. There were protests around the time of the Festival Of The Sea in 1996, which, famously, made no reference whatsoever to Bristol’s past as a major slave port.

A couple of years later the statue was daubed with the graffiti ‘slave trader’. The M Shed’s 1999 A Respectable Trade exhibition and the naming of Pero’s Bridge in 2000 were, perhaps, the first time when there was what you say might call ‘official’ recognition of Bristol’s role in the horrors of the slave trade.

The 200th anniversary of the end of the slave trade in 2007 provided another impetus to do something – infamously the organisers of the Abolition 200 programme saw no irony at holding some of their events at the Colston Hall.

There were protests outside, talk of building on this, but then… not much.

Then the Countering Colston group was set up in 2015. This coalition of activists and local historians have done an amazing amount of grunt work over the last five years, challenging existing ‘official’ histories and fighting a war of attrition with those that would defend the Colston name.

It has scored some victories in that time, most notably the commitment by the Colston Hall to change its name by 2020.

One by one the dominoes were falling. But the big one – the statue itself, that festering sore at the centre – remained in place.

In 2018, after numerous attacks on the statue which included unofficial history plaques, yarnbombing, Colston’s face being painted white and a manacle attached to his wrist, a city council officer unilaterally decided the solution was a ‘corrective history plaque’ to ‘protect the monument’.

The Countering Colston group wanted the statue removed altogether and thus refused to support the project. The consultation was halted in 2019 by the Bristol mayor Marvin Rees after a member of the Society of Merchant Venturers and his supporters intervened in an effort to sanitise the wording on the plaque.

The project was still in limbo when the people took matters into their own hands on Sunday.

Prevarication, equivocation, fence-sitting. Politicians both of the right and (supposedly) of the left who have tried to fudge this now suddenly look like yesterday’s men.

Those who would moan about the need to have brought this about ‘peacefully’ don’t seem to have much idea how long some people have been trying to do just that and how little progress they have made, obstructed, as they have been time and time again, by an inherently cautious, conservative city leadership and local (mainstream) media.

In the end, the decision was made for them by the city’s young people.

To me, the events of Sunday represent nothing less than a generational shift. This should have happened 20, 30 years ago. At least. That it didn’t should make those of us in middle age and beyond blush with embarrassment.

Will Simpson is an activist and author of Freedom Through Football: The Story Of The Easton Cowboys And Cowgirls. From Wulfstan To Colston, Freedom Through Football and Memoirs Of A Black Englishman, the biography of Bristol’s leading civil rights and anti-racism campaigner, Dr Paul Stephenson OBE, are all available from www.tangentbooks.co.uk

Read more: Merchant Venturers say ‘it is right for Bristol’ that Colston’s statue was removed