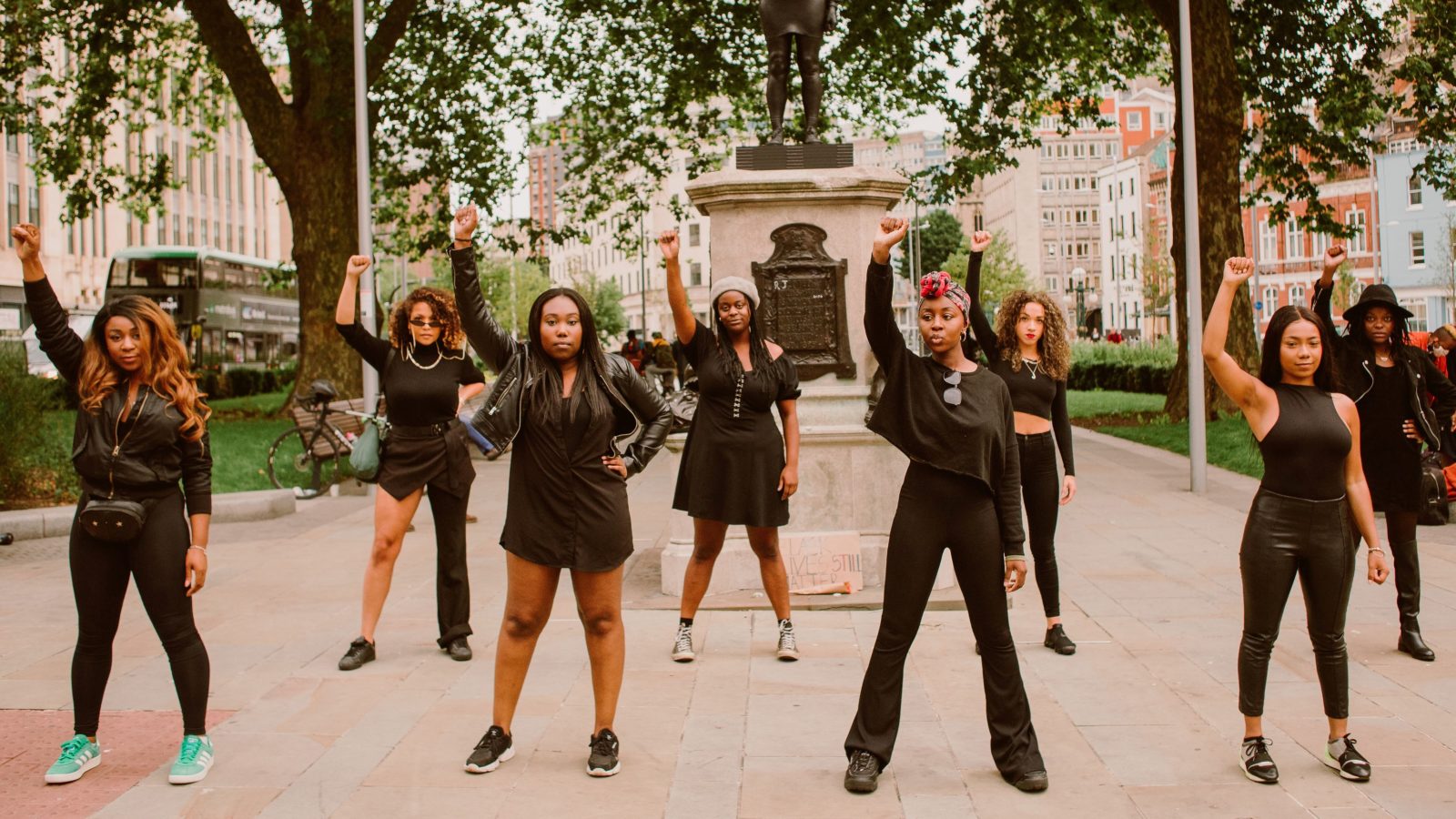 Groggy and blurry-eyed, I scrolled through my Twitter feed on Wednesday morning and saw writer Chinonyerem Odimba had shared an article about a mysterious statue being put up on the empty plinth where, slave trader, Edward Colston once stood.

Seeing the fro, the beret, the fist, I instantly retweeted it and shared the article in the group chat. “We should do a photoshoot in front of this.”

The brief was simple: black women, in all-black, fists raised. It would be a small tribute to Jen Reid and the, often unrecognised, role of black women in the fight for liberation.

Award-winning illustrator, Parys Gardener, jumped on the idea. “Let’s do it!” she said. 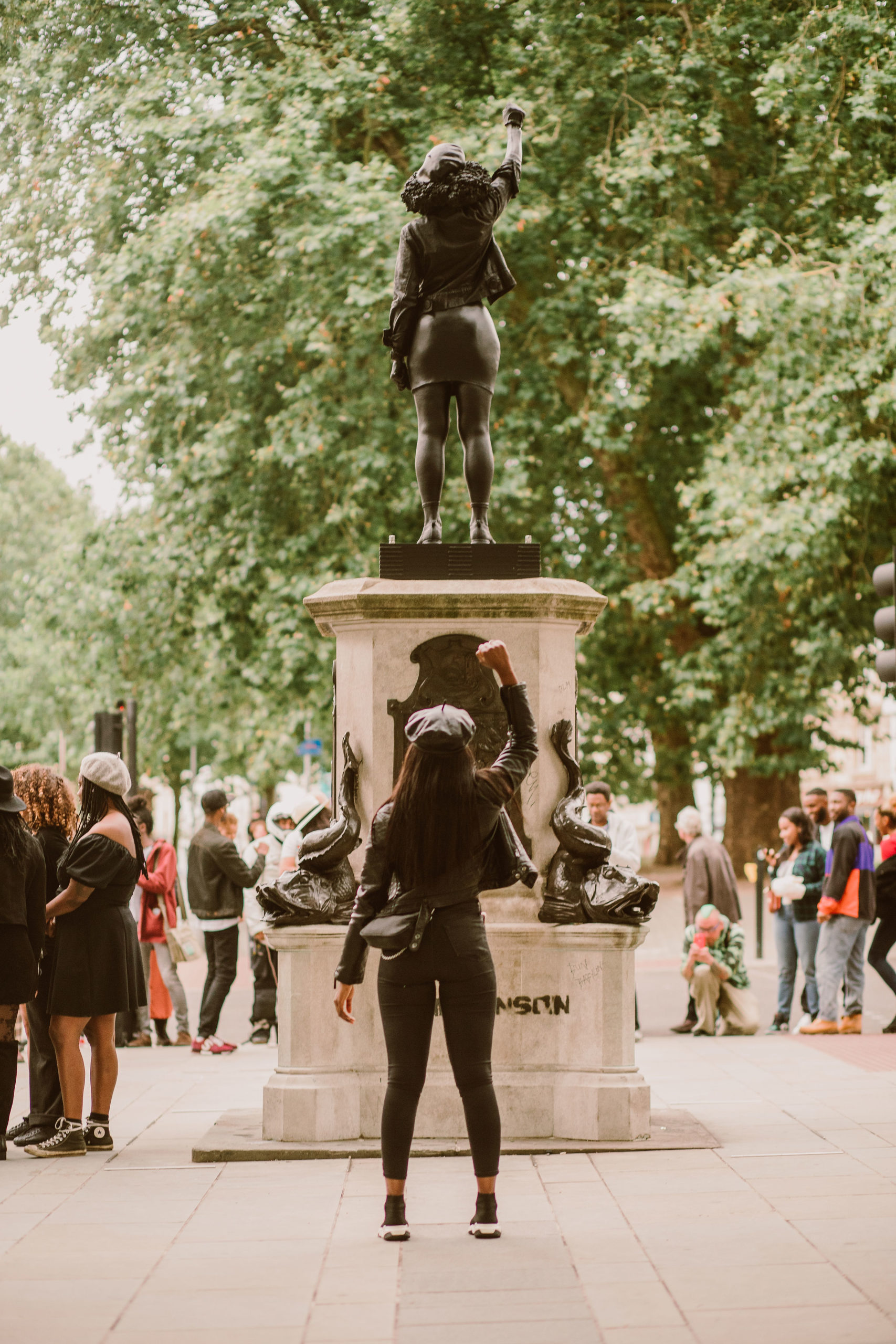 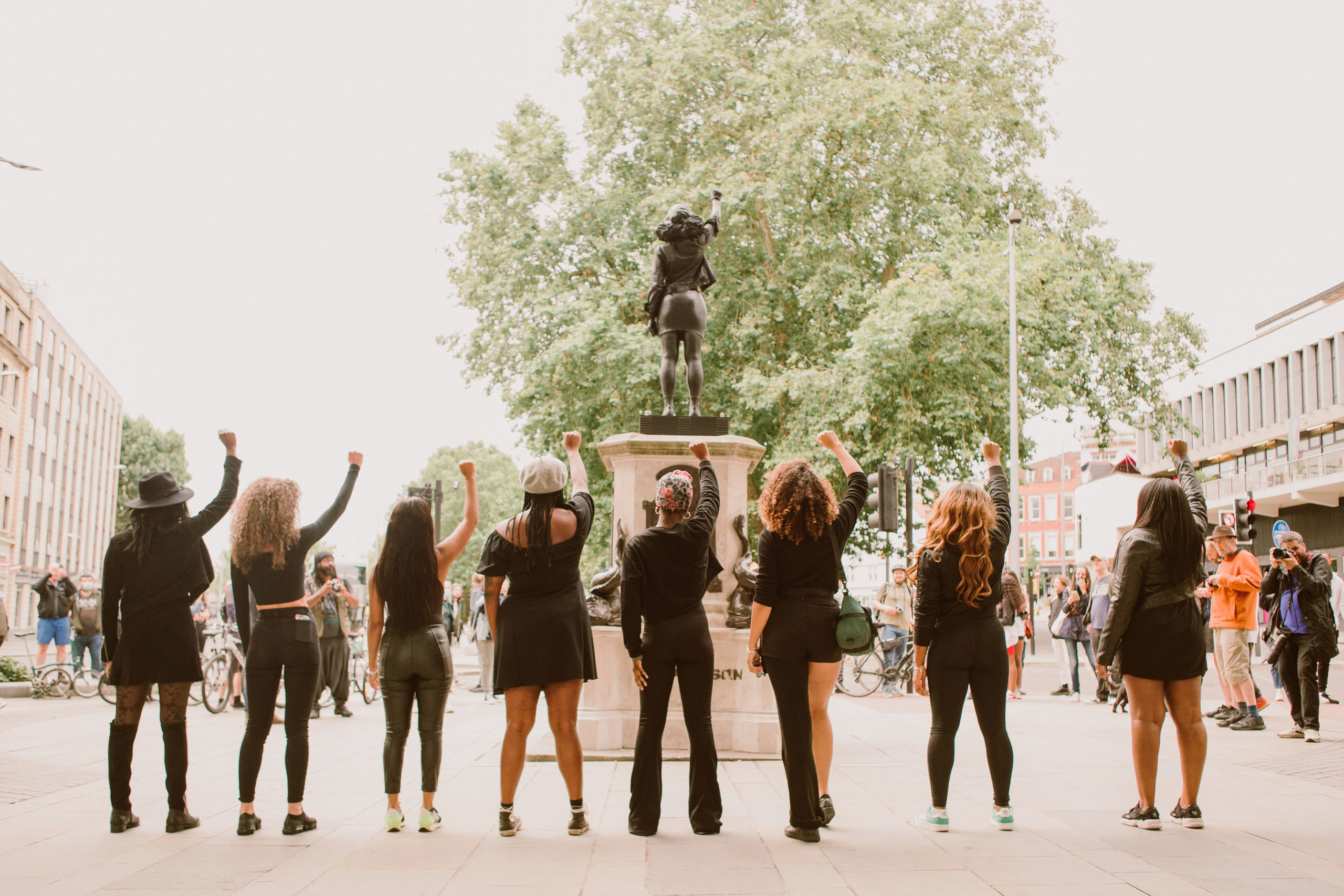 With me, Parys began organising and sending messages – including contacting wedding photographer, Ruby Walker, to check her availability.

Time was of the essence as we grew to learn that the chances of the statue remaining in the public for more than 24 hours, were slim.

Tonight, we need to do it tonight.

There’s something very exhilarating about being in a group of young, black, talented women and taking up space so publicly, so graciously yet so defiantly.

When we arrived on Wednesday afternoon, the statue was surrounded by a crowd of people talking, taking photos, and standing in awe of the strength of Jen Reid’s form. 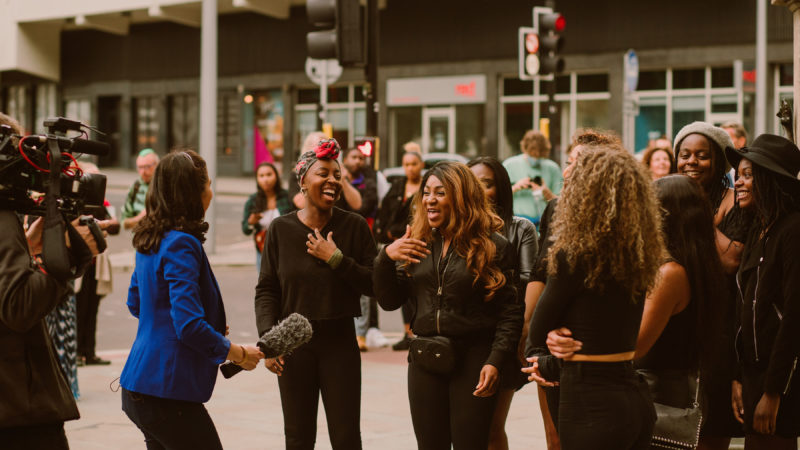 The group share their thoughts with the press. Photo: Ruby Walker 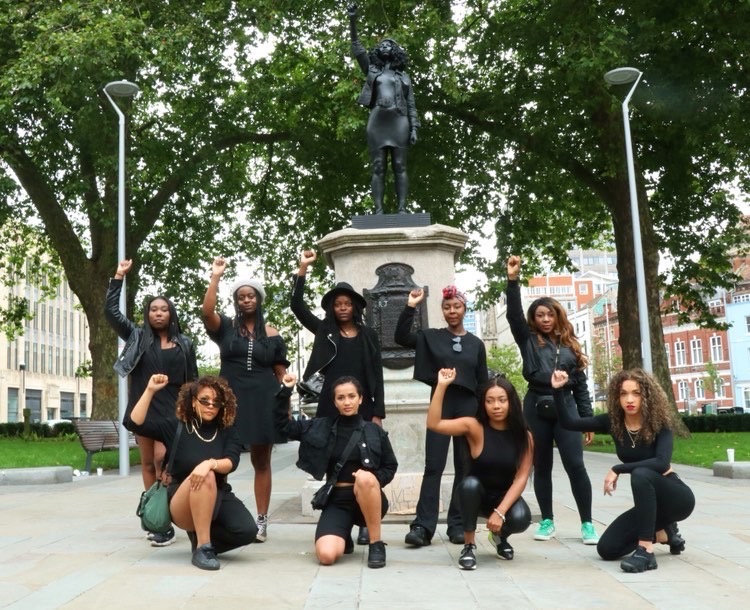 It reminded me, after four months of lockdown and minimal social interaction, of the true power of the critical mass. It did feel like a moment, and in a time when we, as young/black/women are constantly erased from the narrative, it was necessary to document this time in history for us.

Featuring the work and statements of 37 young creatives (including some of the women featured in the photoshoot) across more than 370 billboard and poster sites in Bristol, the campaign enabled us to feel visible and seen in our city.

It was a chance for us to push for action around our collective futures and centre ourselves in shaping what that could look like. 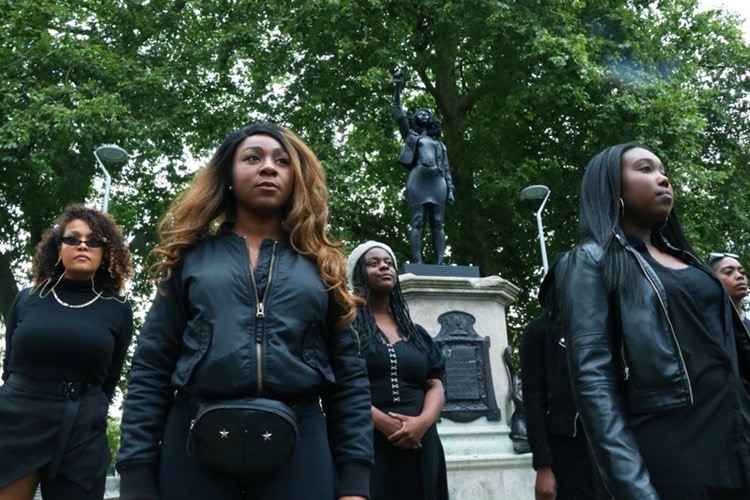 Although the campaign has been successful in platforming the talent and voice of young creatives, I have been disappointed with the discourse around it – particularly from Bristol’s press and institutions.

The conversations have felt shallow, benevolent and uninvested.

Instead of taking stock of the power of what’s being said and acting on it, some seem more interested in seeing this as ‘pretty pictures from young people’.

This is partly why it was important for us to take the photos for ourselves. During the time that the campaign has been live, we’ve seen what claiming physical space means to young people. 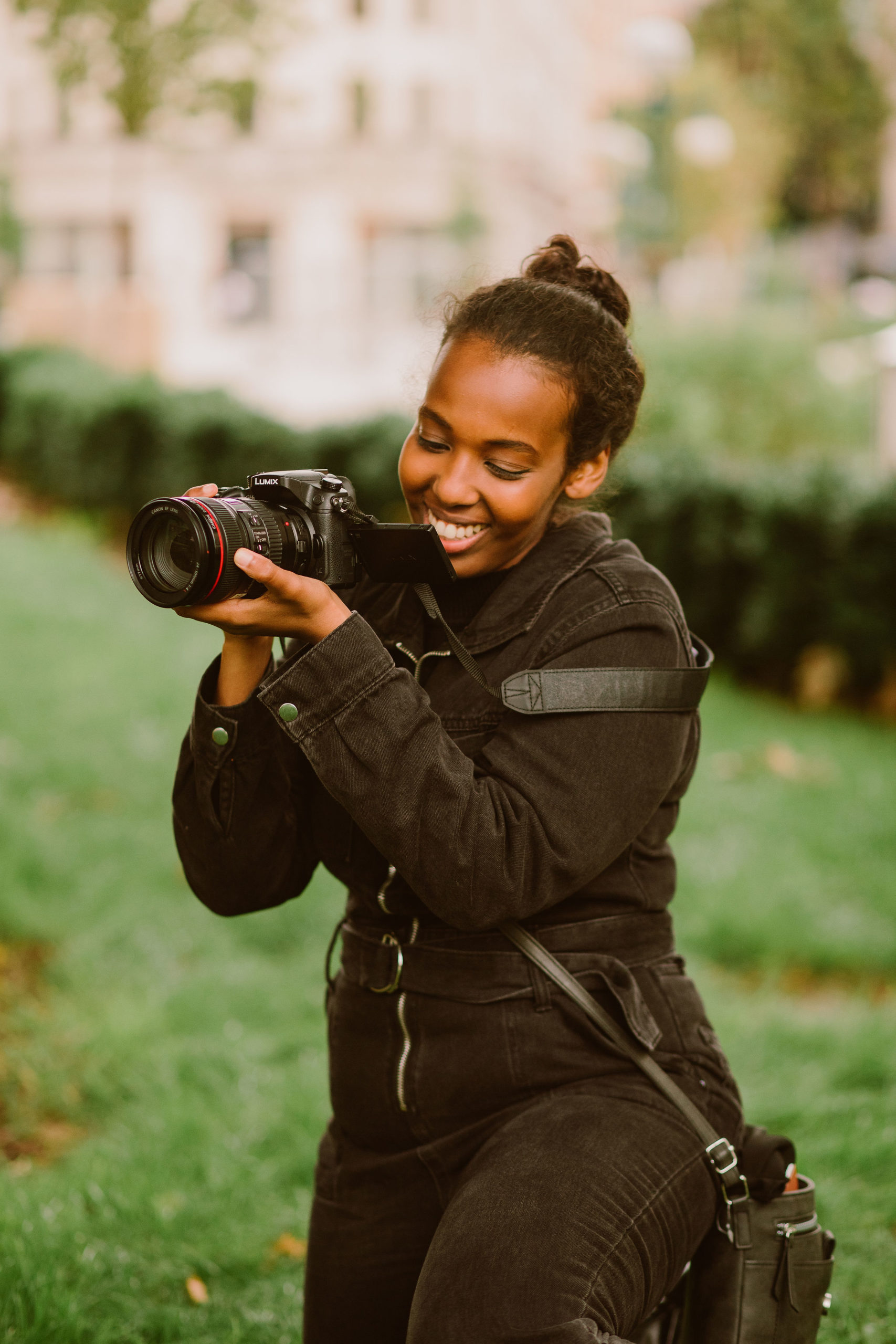 Capturing images of the statute before it was taken down. Photo: Ruby Walker

We’ve seen the value of shaping our own narratives and how important it is to see your own words in your city. #WhoseFuture has reminded us of the ways art moves people.

When we posted our photos with the statue online, the caption began ‘Queens see Queens and Arts summons Artist’.

We wanted to speak to our initial and visceral reactions of seeing the statue and document everything that’s going on for us right now; the complex and painful political undertones, the power implications of a London-based, white man making this piece, the strength, beauty, risks and joy around black womanhood, and the power of the collective.

The response has been phenomenal.

We hoped to show the breadth, force and might of us all as activists, protectors, and works of art and through the photos and videos Ruby Walker, Qezz Gill and Dee Hassan took. We think we’ve achieved that. 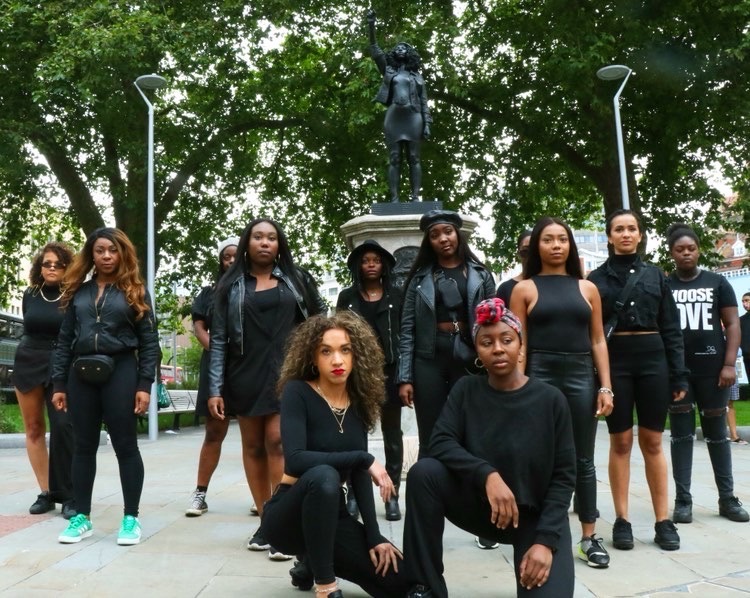 The collective in front of the statue the day before it was removed. Photo: Qezz Gill

The past few months have been traumatic, to say the least, and it was important that we seized the moment to occupy physical space, make a statement and create our own joy – in however brief a moment.

A reminder to ourselves, more than anyone, that we are here. We are not passive bystanders to our future.

That evening, some people met up for drinks with friends or went for a socially-distanced walk, but we, 15 beautiful black women, met in front of a statue to take some bomb-ass pictures that we will be proud of forever.