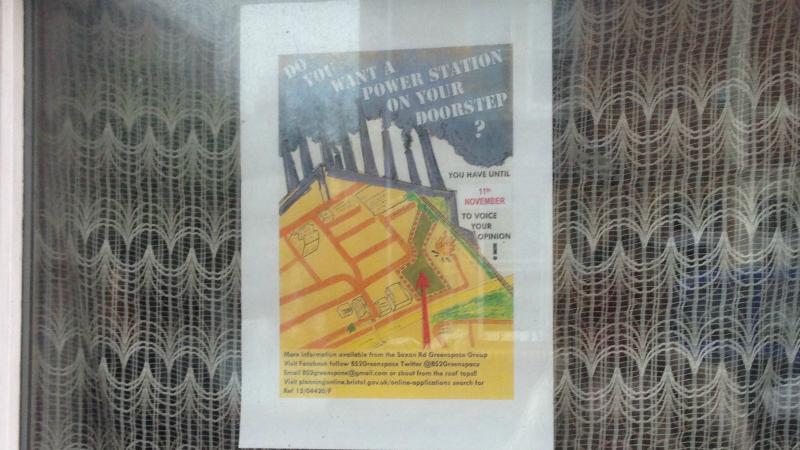 If one only read the Bristol Post, there’d be no way that residents in the wider city would have any inkling that three polluting standby electricity generating stations were currently awaiting planning permission in the European Capital of Greenwash.

Fortunately, this dreadful development has been picked up by Bristol 24/7: and here’s the unsurprising bit; they are all in the more deprived parts of the city.

It is believed these power plants will form part of the Short Term Operating Reserve (Stor) network of reserve power banks which provide additional generating capacity to feed into the National Grid at peak times.

Firstly, a planning application (ref. 15/02310/F) has been submitted on behalf of Plutus Energy for a 48 unit diesel generating plant and two diesel storage tanks with a capacity of 22,000 litres for six Feeder Road, Bristol, and Avonbank, Feeder Road, (both in the deprived Lawrence Hill ward. Ed.) close to St Philips Marsh School.

Forty-eight diesel generators will doubtless chuck out a fair old quantity of particulates, which is a component of air pollution implicated in human cancer,heart and lung damage, and mental functioning.

The exact site of the St Philips generators

The applicants have not conducted an environmental impact assessment for the site since its small size (0.5 ha) is below the threshold for such a requirement. Nevertheless, local ward councillors believe such an assessment should be carried out due to the size and impact of the proposed development.

In addition, some skulduggery is evident in the noise impact assessment that has been carried out. Edward Road was chosen for the noise impact, significantly further away from the site than St Philips Marsh School. Again, local councillors think this study should be reviewed and amended to include the impact on the school and the nearby Severn Vineyard Church.

Despite the fact that inner city Bristol already has dreadful air quality, this is not the only dirty diesel generating plant planned for the city.

An application (ref. 15/04297/F) for another such facility has been submitted for Romney Avenue in Lockleaze, another of the city’s not so prosperous areas. Once again the applicants are Plutus Energy, who want to put 32 generators on this site close to a major housing estate and obviously care very little indeed for Bristol’s air quality.

Finally, yet another application (ref. 15/04420/F) has been filed by UK Power Reserve for 10 diesel or gas generators for in in New Gatton Road in St Werburgh’s, with ten 12-metre high exhaust flues.

How a diesel power plant may look, according to the St Philips planning application

It’s quite scandalous that UK Power Reserve and Plutus Energy are even considering putting polluting power stations in or next to residential areas. On account of the need for extra domestic heating and lighting, these back-up power stations are most likely to be used on cold, foggy winter days when something called a temperature inversion occurs; this causes cold air to sink, trapping the warm air in a bubble enveloping the city, thus enabling urban pollution to build up to dangerous levels, perfect for increasing the incidence of respiratory ailments.

The fact that both companies have cut corners in the form of environmental and noise impact assessments shouldn’t be forgotten.

These dangerous unwelcome schemes should be thrown out by councillors.

Finally, a language note. Over in the United States of America, this dumping of dirty, polluting and generally unwelcome facilities on poor, deprived communities has a name – environmental racism. In Wikipedia, environmental racism is defined as follows:

“Environmental racism is placement of low-income or minority communities in proximity of environmentally hazardous or degraded environments, such as toxic waste, pollution and urban decay.”

Steve Woods is a translator, local campaigner and chairman of the St Werburghs community association. This column was first published on his blog.