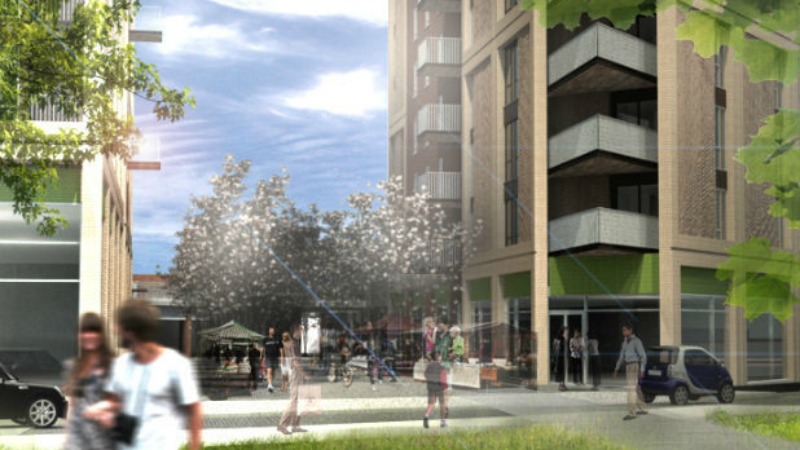 At a time when there is a huge need for more homes to be built in the UK, a golden chance has been created for political gain and private opportunism in an area which is ripe for exploitation.

Bristol is a prime example, with newly elected Mayor Marvin Rees calling for the city’s “massive housing crisis” to be addressed: music to the ears of some property developers, who can use this highly laudable sentiment when unveiling their plans to mask their real intentions: of basically making big bucks.

Urbis’s intentions, according to its managing director Richard Clarke, were to “revitalise the community”.

“It’s an ideal place to build new homes,” he gushed, as his proposal to build a stonking huge 16-storey 188-unit apartment block was given the green light by councillors directly against the wishes of their own planning officers, who branded the block “monolithic” and had advised the council to reject the plans due to the height and bulk of the scheme.

Now, don’t get me wrong, St Catherine’s Place is an ugly, depressing, eyesore that is desperately in need of a facelift and the whole area around there could indeed benefit from some sort of redevelopment. But by plonking a humungous tower block in an area thankfully short of such structures, it is setting a worrying precedent.

Indeed two years on and Urbis are now trying to get planning permission for at least ten more tower blocks of up to eight to ten storeys each on the surrounding Bedminster Green area.

Work on their already approved benchmark 16-storey giant has yet to start for some reason, but the developers are keen to turn the whole area into Bedminster’s own version of East Berlin, albeit, as they see it, seizing on a “remarkable opportunity to bring Bedminster back to its former glory”.

Now, Bedminster’s “former glory”, if I’m not mistaken, was of working class communities built around traditional terraced, streeted, neighbourhoods, with pubs and greens and social cohesion – not expensive (for that’s what they will be) flats and apartments priced out of the reach of the majority of people and placed in high anonymous blocks totally at odds with other developments in the area.

Apart from the huge council-housing tower blocks in areas such as Hartcliffe and Redcliffe and Easton for example, and the privately rented ones in the city centre, Bristol just hasn’t got a high-rise culture.

Other new developments, just off the centre like the one on Wapping Wharf, are an eye-pleasing four storeys high, so it would seem that going against this grain by building high-rise in Bedminster is basically putting profit firmly over any social or aesthetic or altruistic motive: cram ‘em in, in expensive comfort mind (a proposed 855 apartments would be built in these blocks), and to hell with the consequences as the developers run laughing all the way to the bank.

And there will be consequences. Not that another local developer, Paul O’Brien, who has outbid Urbis for one of the parcels of land – the Pring Street site –  and also intends slamming up a ten storey block of over 200 apartments there as well, seems to give a hoot along with Richard Clarke.

Consequences like the over-burdening of already stretched and under-funded local services like schools and doctors and dentists surgeries; the extra pollution caused by the increased traffic and parking problems which an estimated 1000 extra cars could bring; the massive visual impact impairing a historic skyline which is such an important part of this city; the reduction in size of the green at the bottom of Windmill Hill with the destruction of its mature trees and the demolition of the landmark Federation of City Farms building with its distinctive grassy roof.

“Oh”, cry the developers, “but we will improve the nearby railway station and the  highway system, build a bridge over the river Avon, provide retail outlets and a ‘district heating system’” – basically shorthand for a renewable energy centre on which they have been very cagey in releasing any details on emissions and its impact on the local community.

As for the railway station, that would purely be for the benefit of the new inhabitants of these blocks who could swan in and out – many surely from that there London – in their commuting haste, and would add absolutely zilch to the local community.

The Urbis development in Bedminster was approved despite objections over height

As a counter to all this a local voluntary group, the Windmill Hill and Malago Planning Group (WHaM for short) have proposed an alternative to the high-rises.

They launched their vision documentLINK at a packed community centre earlier this year, and in it outline a greener, low-rise, more socially amenable plan, with space and light between buildings.

They’ve just improved on this with their Community Site Brief emphasising what a great opportunity this could be to make this a well-thought out development with vision and respect for the existing community and the local environment, with buildings no more than a maximum five storeys high that could add to and enhance a neighbourhood, making it a development to be proud of, and a place to live, socialise and feel safe in, rather than turning it into the dense wall of high-rise anonymity.

With proposals at pre-planning stage for most of the development, Urbis claiming that 30 per cent of its homes will be affordable (affordable for who exactly is another question, certainly for not most local residents, and don’t get me started on the complete paucity of social housing being offered), O’Brien keeping tight-lipped, and WHaM bravely suggesting better ideas, it seems the stage is set for a long protracted stand-off: campaigning turning into protest.

Which shouldn’t have to happen ideally, as communities are there to be respected, listened to and enhanced surely?

But hey, when did the pursuit of bigger and ever more profits and political kudos ever take such considerations into account? Watch this space…

Elfyn Griffith is a freelance writer/reviewer who has lived in Bristol for over 30 years, writing for a number of publications, both locally and nationally.