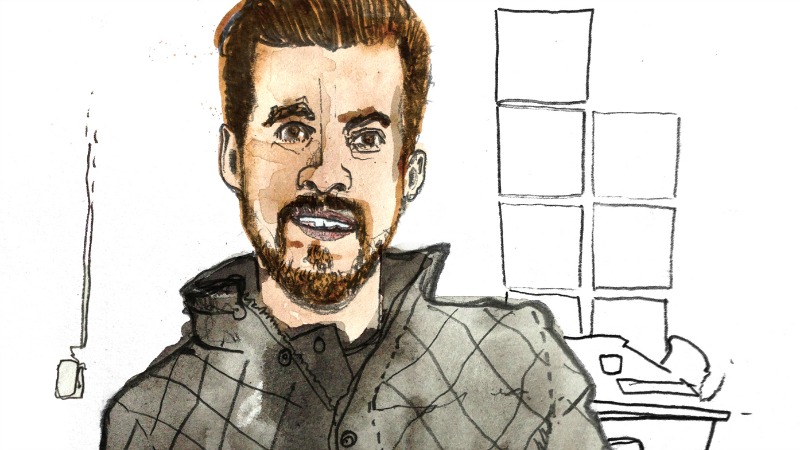 Casamia have moved to Redcliffe with not one but two more new openings from the Sanchez-Iglesias family on the way. Martin Booth meets Peter Sanchez-Iglesias to talk Bristol, ambitions and sourdough pizzas.

Picture the scene. It’s the middle of summer in Bristol and guests at three neighbouring restaurants have spilled out onto the outdoor terraces overlooking boats bobbing in the water of the Bathurst Basin.

And there’s Casamia head chef Peter Sanchez-Iglesias with an espresso in hand, surveying the scene after a busy night’s service, perhaps thinking of his older brother Jonray who he worked so closely with during his career but tragically died at the age of 32 last year after leading the family’s move from their original home in Westbury-on-Trym to this corner of the city centre.

Peter pictures the scene himself as he tucks into a ham and lettuce croissant at Hart’s Bakery, where he has chosen to meet me, a short walk from the restaurant’s new home at The General in Redcliffe. In the next few months, Casamia will next door have pizza and ice cream restaurant Pi Shop, and tapas and sherry bar Paco’s Tapas, named after the family patriarch familiar to anyone who has eaten at Casamia from his slick front of house duties.

“I think about it all the time when I look outside,” he says. “I think, ‘this is gonna be awesome.’ I can’t wait to feel the buzz and the energy. I just can’t wait to see everyone on a Saturday night, taking a little step back and go on outside, have a little sip of a coffee and look at them all and go, ‘bloody hell, we created this’. It will have that connection that me and Jonray will always have. This is our dream. This is what we filled it with. I just can’t wait to have that.”

Thirty-year-old Peter is getting into his stride but still able to eat his croissant and comment on the bakery where we are sitting (“It’s got amazing cakes, the coffee’s bloody brilliant and the vibe feels right; it just works. It’s almost like they built the kitchen first and then turned it into a cafe. I love that connection, that feel.”)

Tall and languid, with slicked back hair, a heavy watch on one wrist, carefully trimmed facial hair and sporting a stylish leather jacket, Peter is a chef who earned his stripes in Bristol but today has recognition from some of the biggest names in the industry and now has customers that will travel long distances to taste his food.

The new Casamia opened in January this year and work is currently underway behind the scenes to open Pi Shop and Paco’s in quick succession.

“It will have a beautiful energy there,” Peter says, moving his hands around as he speaks. “I just can’t wait for it. I’m buzzing about it. I reckon Bristol is gonna be the number one place outside London. That’ll be awesome. Go to Bristol because I do believe it’s a cool city and I’m so supportive of this city.”

Peter’s gesticulations increase when he finds a subject close to his heart, like how to make the perfect pizza that will be served at Pi Shop, one that he and his team have been testing in their development kitchen; getting just the right balance in the fermentation process, using yeast from Casamia’s five-year-old sourdough, making sure that the last pizza of the day comes out of the wood-fired oven looking and tasting the same as the first.

So before long, Peter will be overseeing not just one but three restaurants, although Casamia will always remain the key component. This fiercely ambitious chef might also be working towards earning it two Michelin stars, but at least on the surface he looks unfazed at this extra responsibility.

“Everybody has their theories but they haven’t given a brief on how to get two stars. If you get two stars, of course it would be brilliant, brilliant for Bristol but I think it’s one of those things where it’s got so much history and heritage behind it but it doesn’t necessarily mean that you’re a great restaurant because you’ve just got two stars.”

It’s not often a Michelin-starred chef clears up after you, but before I notice Peter has taken my crumb-filled plate and empty coffee glass, his thoughts still in overdrive

“I’ve learnt just to look forward and not look back. Because looking back is the past. There’s no point looking in the past, you’ve just got to live in the present and even in the future. You’ve got to get a balance, living in the past it’s just, it’s you end up just missing something.”