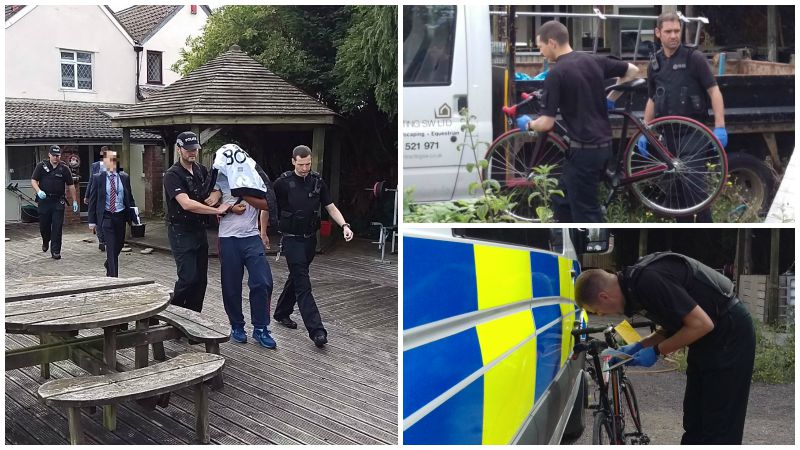 If you live in Bristol it’s likely you’ve either had your bike stolen or know someone who has.

As a city leading the way in cycling, organised crime groups have taken advantage – with about 2,500 bikes going missing every year.

Some of those were recovered when police raided addresses across the city early on Wednesday morning.

Police prepare to raid a house in Lockleaze

Bristol24/7 visited one of four homes targeted in Filton, Lockleaze and Stoke Gifford by police seeking to break two principle gangs in the city.

Five people were arrested, with high-end bikes – some worth thousands of pounds – seized and added to more than 70 already recovered as part of the investigation.

It may seem like a drop in the ocean, but police say they’ve made a “big impact” in their bid to disrupt criminal networks dealing in the growing stolen bike trade.

A suspect is led out from a Lockleaze house

Around 100 officers gathered for a briefing at 8am, before being divided up and sent out in riot vans under Operation Talisman.

More than a year since the investigation started, a strike plan was executed in the hope of tracing eight suspects.

At a property in Lockleaze two vans and about a dozen officers stormed the house of one suspect who was led out with his face covered.

Three racer bikes were found hanging in an out building.

Three high-end bikes were found in an out building

The bikes were carried out, labelled and taken away in vans to join dozens waiting to be reunited with their owners.

Police have released images of 28 bikes already, in the hope their owners will come forward.

Although two gangs were the focus of Wednesday’s investigation, police said they are widening their net to include other known organised crime groups operating in bike theft.

They are refusing to comment at this stage on where they believe the stolen goods end up, or whether they’re taken to order.

Officers are briefed ahead of the raids

“It’s the result of a lot of hard work over the past year to identify those involved and gather evidence against them.”

He added: “Around 2,500 bikes are reported stolen every year in Bristol and we know there’s a lot of concern among cyclists about the extent of the problem.

“Hopefully, today’s operation will provide some reassurance about the work we’re doing to target key people driving the problem.

“Although many are organised criminals, their lives are made far too easy by the availability of often high-value but poorly secured bikes.”

He added that Operation Talisman does not extend beyond Bristol and South Gloucester shire.

In relation to Wednesday morning’s raids, so far four men aged 18, 19, 21, 22 and one woman, aged 45, have been arrested on suspicion of conspiracy to handle stolen goods.

If you recognise one of the stolen bikes seized, please contact Acting Detective Sergeant Russell Saunders on the non-emergency number, 101.