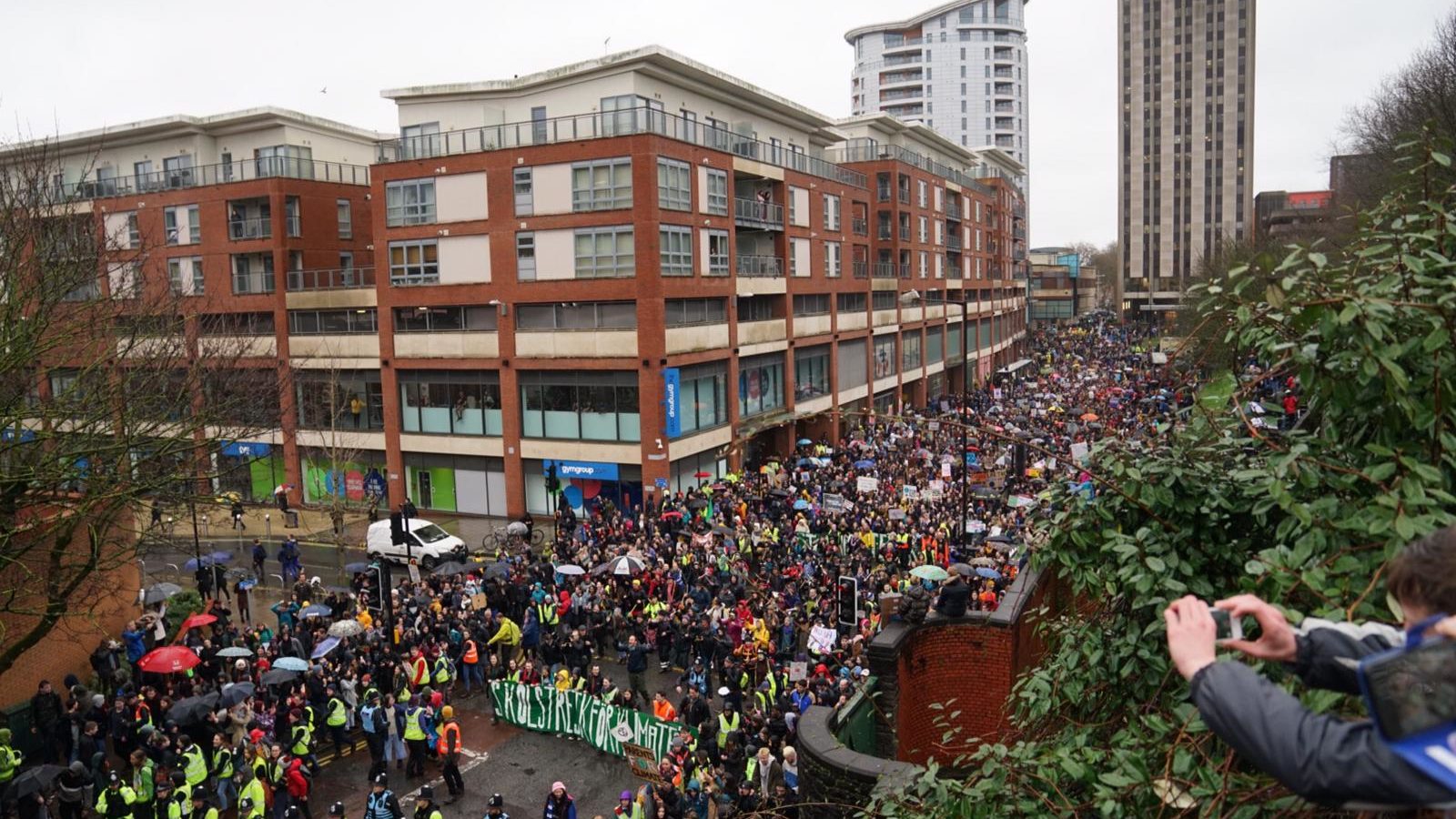 Bristol has had some high profile visitors in its time, but few garnered quite such a welcome as a teenage activist who has captured imaginations around the globe.

“Guys, she smiled at me,” exclaims a mud-coated girl in the crowd turning euphorically to her friend.

“She literally waved at me,” says her companion, as the colourful protest march winds its way towards the end of Baldwin Street and back towards College Green, photographers scrabbling to get the best shots as every vantage point is seized. 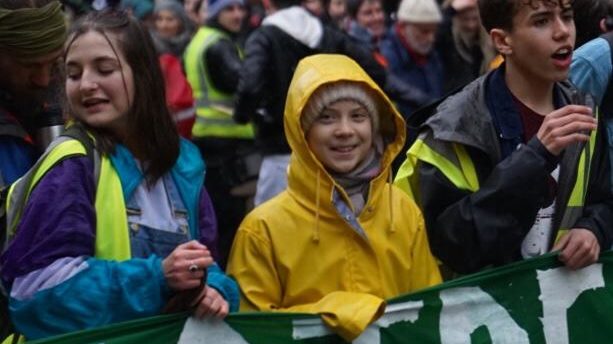 Greta Thunberg has fast risen to become the hero to a generation and her visit to Bristol on Friday met with a media frenzy as tens of thousands turned out in the predictably miserable British weather to call for action on climate change.

To chants of “Greta, Greta” and loud cheers, the 17-year-old environmental activist from Sweden mounts the small stage on College Green in her trademark yellow raincoat prompt at 11.45am.

“I’m so happy to be here in Bristol with all of you,” she says, thanking the crowd that spans the whole of College Green as far as the eye can see and continues up onto Park Street.

“I will not stand aside and watch, I will not be silent while the world is on fire. Will you?” demands the teenager, continuing: “World leaders are behaving like children, so it falls on us to be the adults in the room. It should not be this way.”

Coming to the end of her five minute speech, Greta rallies the crowd, saying: “Activism works so I’m telling you to act. If you look throughout history, all the great changes have come from the people.

“We are being betrayed by those in power and they are failing us, but we will not back down. If you feel threatened by that then I have some very bad news for you because we will not be silenced. We are the change and change is coming whether you like it or not.”

Amid the sea of umbrellas and placards, College Green has turned to mud in a scene that could rival Glastonbury, but spirits remain high throughout. Small children, steadfastly clutching their homemade signs, are ushered to the front and hoisted onto shoulders, while teenagers pose for selfies, men wielding cameras jostle for position and council workers peer out of the windows from their vantage point in City Hall.

With just eight days to organise the high profile visit, Millie one of the Bristol Youth Strike For Climate organisers, admits it has been the most stressful weeks ever for her and fellow organisers as she welcomes an event of such a scale being held outside of London.

“They said it wouldn’t last,” says one of the group’s co-founders, addressing an estimated 30,000 people at Bristol’s tenth climate strike.

She adds: “Never feel like you are too small or too young to make a difference.”

Mya-Rose, the youngest Briton to be awarded an honorary doctorate at the age of 17, spoke of how vital it is to have an inclusive and diverse movement in the fight against climate change.

At least twice calls for medics to attend to people in the thick crowd ripple down to the front and help is quickly mobilised.

Soon after 12pm, the march slowly makes its way down into the city centre to the sound of samba drumming and chanting, Greta, a small but distinct figure at the front banner, flanked by other youth strikers and a heavy police presence.

The full spectrum of signs are proudly on display. Many stating their love for Greta, others featuring prominent world leaders in less favourable terms. 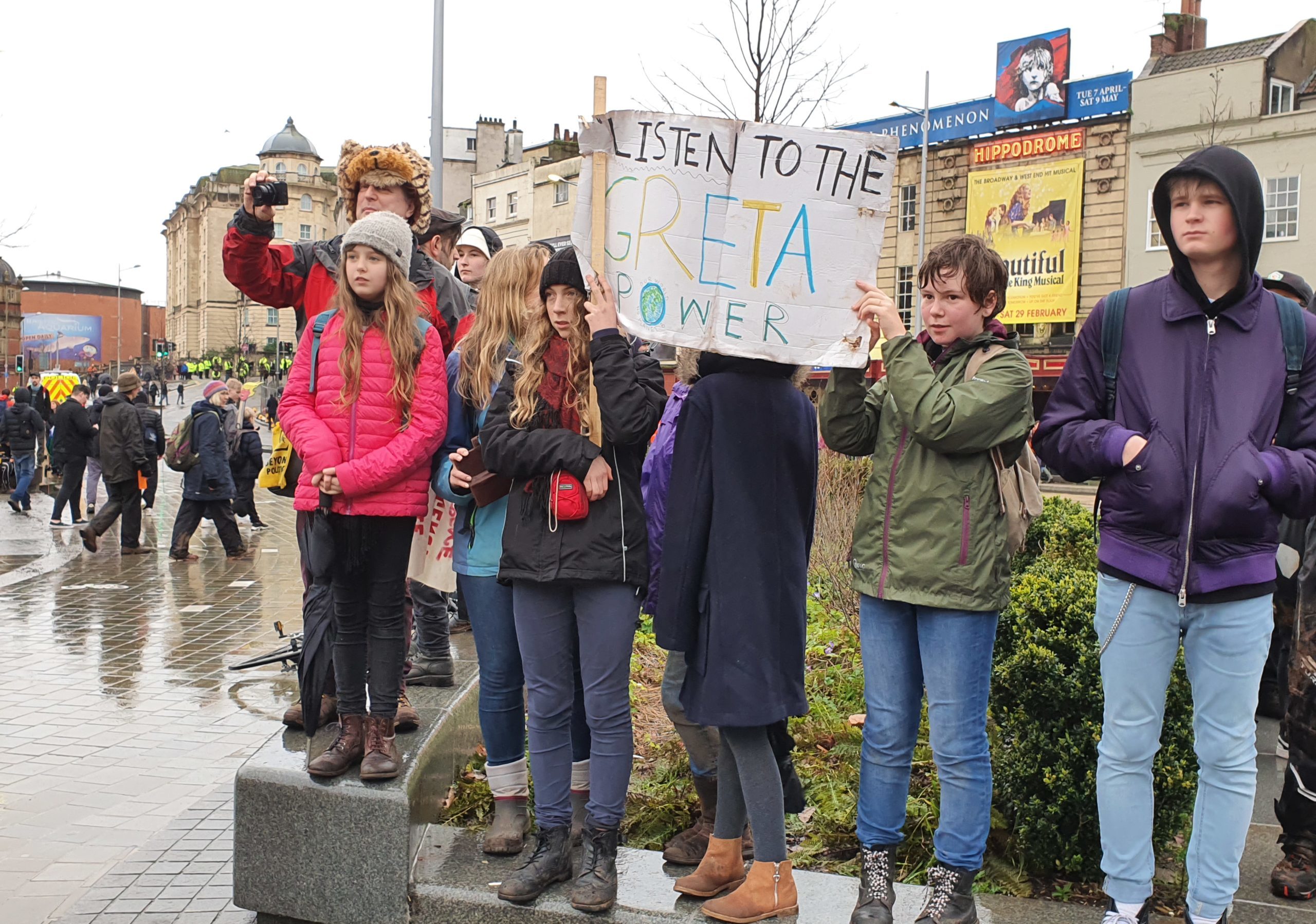 ‘Listen to the Greta power’. Photo by Ellie Pipe 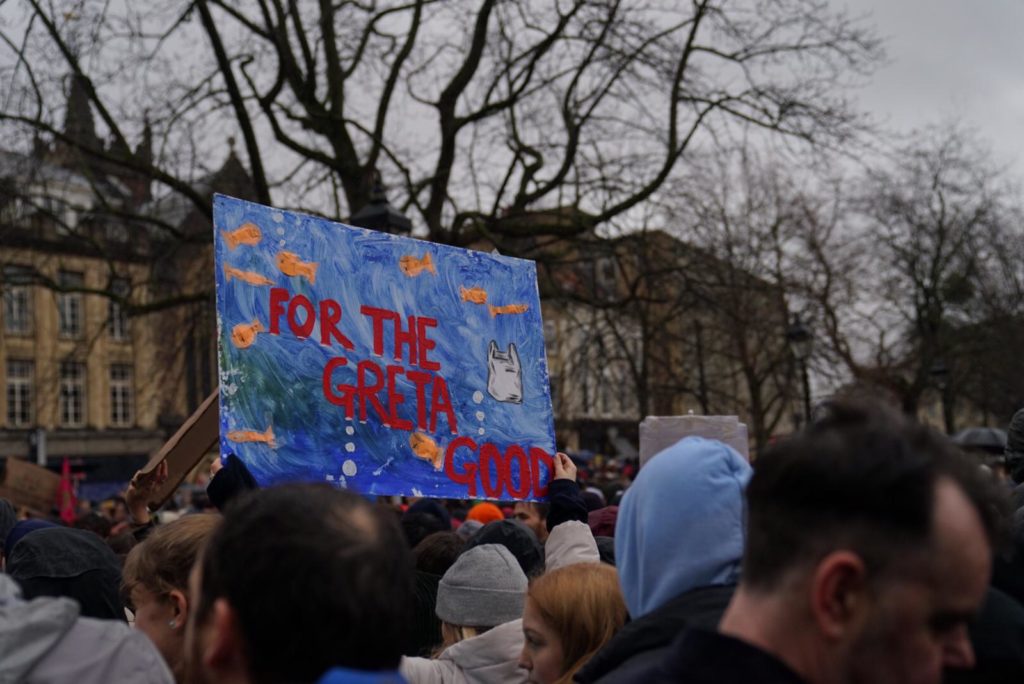 The 17-year-old is inspiring a new generation of activists. Photo by Ellie Pipe 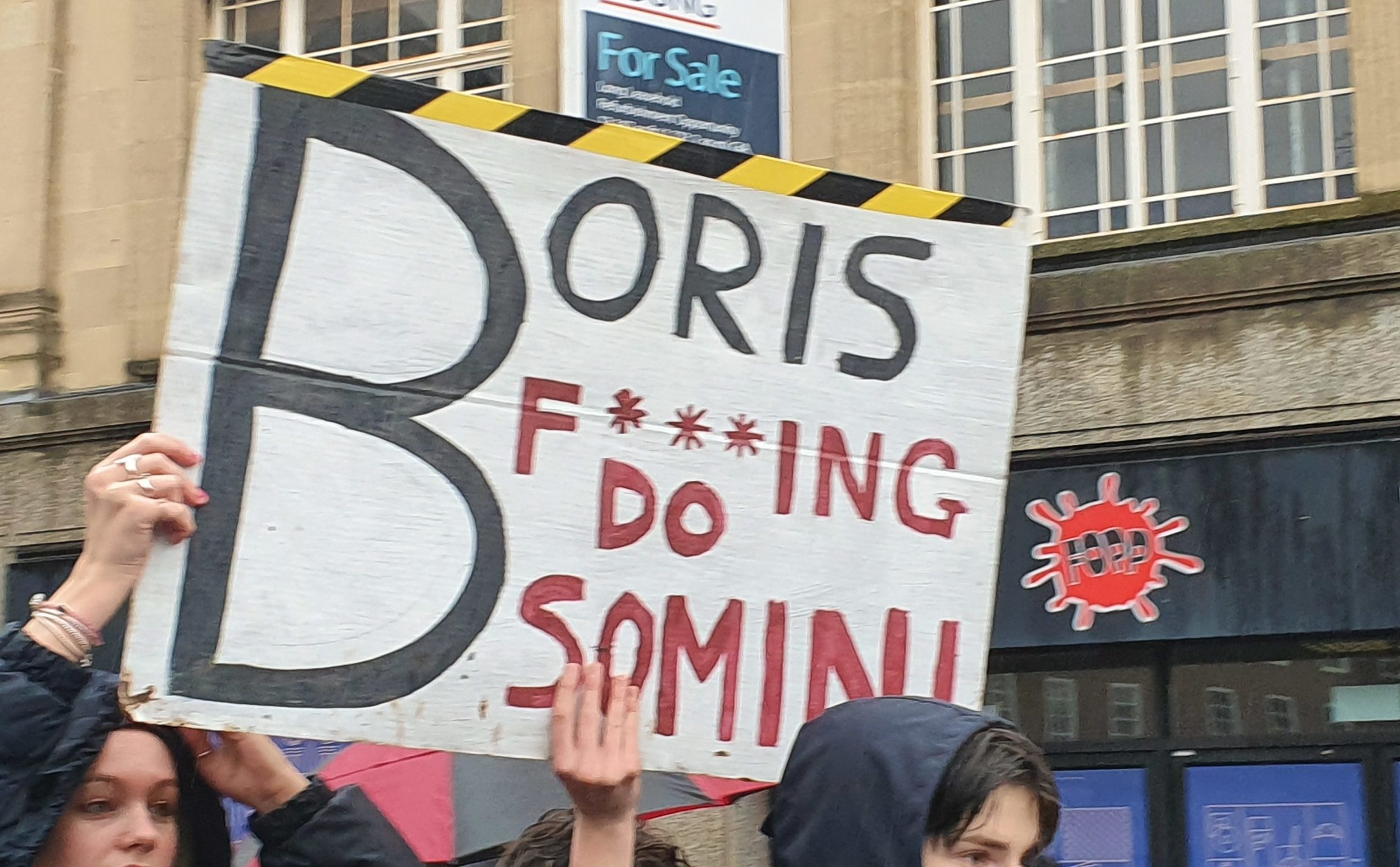 Some anger was aimed at the prime minister. Photo by Ellie Pipe 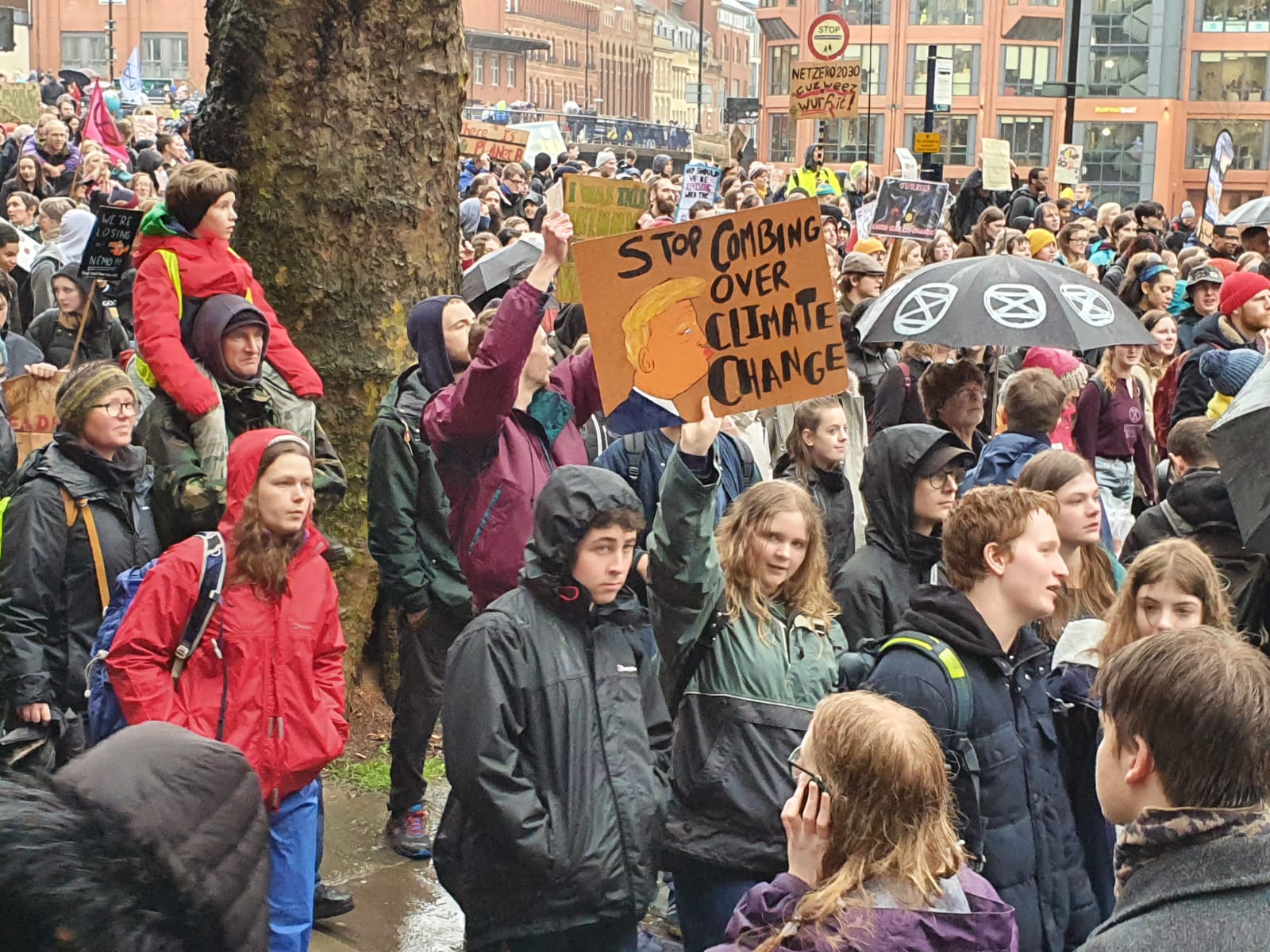 And some at president Trump. Photo by Ellie Pipe

As the mass protest draws to a close, College Green is left spotless but a sea of mud. A fundraiser to restore it to its former glory has already been launched.

If every person that was at the #BristolYS4C gives just £1 we can #TurnCollegeGreenGreenAgainhttps://t.co/dmq72gZLlw

It’s fair to say not everyone was supportive, with people taking to social media to question how people travelled to the event, the cost to taxpayers and the impact on College Green.

A joint statement Bristol City Council executive director Mike Jackson, and superintendent Andy Bennett, Bristol Police Commander, at 3.46pm confirmed all roads have been reopened as they thanked all involved for helping the protest run smoothly.

Thank you to all volunteers, council staff, @ASPolice and @swasFT for keeping everyone safe on College Green during the protest organised by #BristolYS4C
Photo credit @design_bristol pic.twitter.com/ZNRkJ78kCt 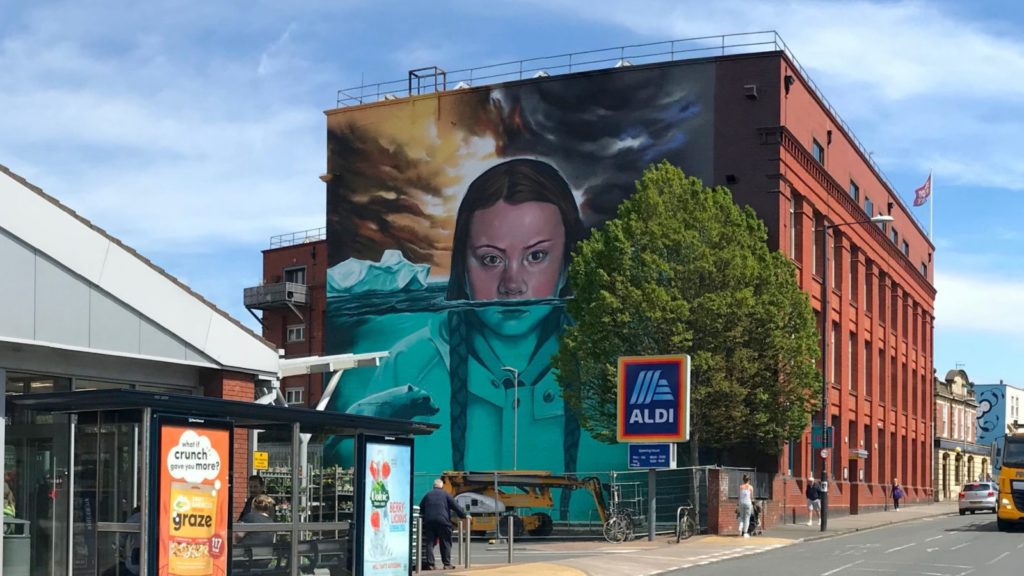 Greta’s planned visit to see her mural by Jody on the side of the Tobacco Factory was cancelled early in the day on Friday. Photo by Martin Booth 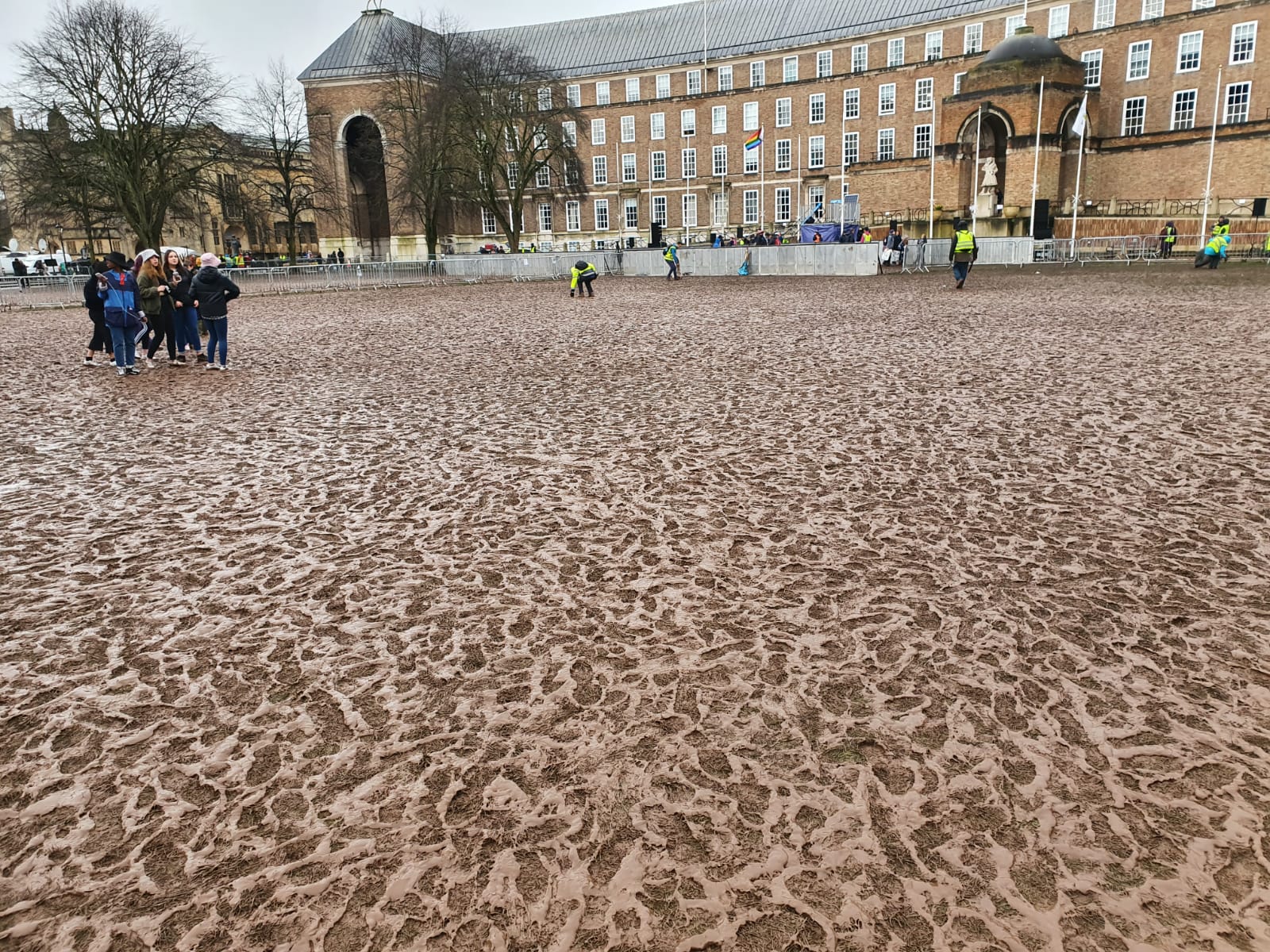 A fundraiser has been launched to restore College Green to its usual green. Photo by Ellie Pipe