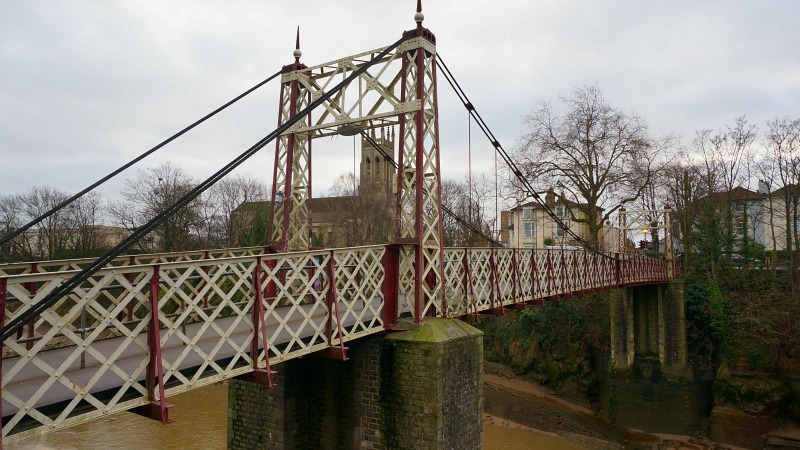 The Bristol Bridges Walk is anything but a gentle stroll. By foot, the 33-mile route, crossing each of the 43 bridges of Bristol only once, is long and challenging. The journey is also an exploration of one of the greatest mathematical puzzles of all time.

The Bristol Bridges walk is no ordinary walk – it is the solution to a mathematical quest which has puzzled scholars for nearly 300 years.

The walk has its roots in the The Seven Bridges of Königsberg puzzle – a historical conundrum dating back to the 1700s. Trying to find a solution to crossing each bridge of the  Prussian city only once became a puzzle craze which swept Europe.

Eventually, in 1735, the mathematical genius Leonhard Euler proved that it was impossible to solve. In doing so he laid the foundations of a number of notable mathematical theories, but the puzzle itself sunk into academic obscurity – a textbook staple, loved by mathematicians, but largely forgotten by the wider public.

Then, just three years ago, German mathematician Dr Thila Gross, who teaches at the University of Bristol, noticed there were many similarities between Königsberg and Bristol. The cities are a similar size, the same distance from the sea and had the same number of islands. However, there was one catch, Bristol had 43 bridges instead of seven.

“It’s the same as Königsberg  in many respects,” said Dr Gross. “Just more bridges…and it’s that which makes finding a solution much more difficult.”

And so his challenge began.

Gross spent hours on Google maps finding all the bridges, he did scouting trips and then, finally confident of his research and data, spent a day working out the best way of walking the route.

“ If it works there could be many solutions, but you want to find a reasonably short one,” he said.

“I thought I had a solution very quickly,” said Gross.  However, like many great discoveries, the path was not that easy. “I discovered a bridge that I didn’t know about…that totally derailed my first solution and I had to abort the first attempt and start again.”

Gross wanted the walk to end at the Clifton Suspension bridge and eventually came up with the perfect route – all 33 miles of it, starting at Spike island and finishing by the iconic structure.

“I thought wow that’s great – it’s so similar to the historical puzzle, but actually you can solve it”

But this is not just the whim of an academic sitting in an ivory tower.

“It’s nice how this relates to the real world,” said Dr Gross.

“If you are a postman or garbage collection, and you want to go through all the streets without doing a street twice you use networks – it’s all the same problem.”

“It’s not easy – the fact that is is possible in Bristol is fairly unique,” said Gross. “Although in Bristol many things are possible which are not possible elsewhere.”

Of course, with a flurry of new bridges planned from Cattle Market Road to the new Bristol arena, Camden Bridge and Finzel’s Reach Bridge – the Bristol solution to a centuries old problem may be short lived.

I have a confession. Unlike Dr Gross who completed the walk in one go, I split the journey into three more manageable sections.

From the windswept mud flats at the mouth of the River Avon, a glimpse into the forgotten industrial heritage of East Bristol and the historical bridges of central Bristol each section was a distinctly different experience.

Keeping the children happiest was the central section – starting from Vaxhuall Bridge the map reading is perfect for under-10s and, more importantly you are never far from a cafe for a restorative hot chocolate. Walking we spotted bird caves in the river banks which are hidden from
view when you are driving, history lessons are everywhere as many of the information boards which line the route have fascinating historical pointers and discovering some of the lesser know historical titbits about bridges like the beautiful Gaol Ferry Bridge was a revelation.

Going east from Temple Meads and St Philips Marsh you discover the industrial heritage of the city. 200-years­-ago it may have been a grim area but, “for more than a century the Feeder Canal was the main artery that kept the wheels of industry turning ­ supplying jobs and pay packets for
the people of the area” (Barton Hill History Group). Now rowers speed past and swans cruise by and the historic Netham Lock with its listed lock keepers cottage is still a key gateway for canal boats and cruisers.

The final section I completed on a beautifully bright winters day. There are long walks between the bridges here and, in my opinion, best saved for a clear day as the views from Avonmouth bridge across the Bristol channel to the Severn bridges and Wales beyond are spectacular – and there is a thrill of walking alongside the M5. The long walk back along the river to finish at the Clifton Suspension Bridge was a tiring but triumphant trek.

Top tips: Good shoes essential, binoculars, A-Z of Bristol – going to press several route closures meant detours around recommended route, I gave each of the children a map and clipboard so they could do their own navigating and tick off each bridge and lots of chocolate!