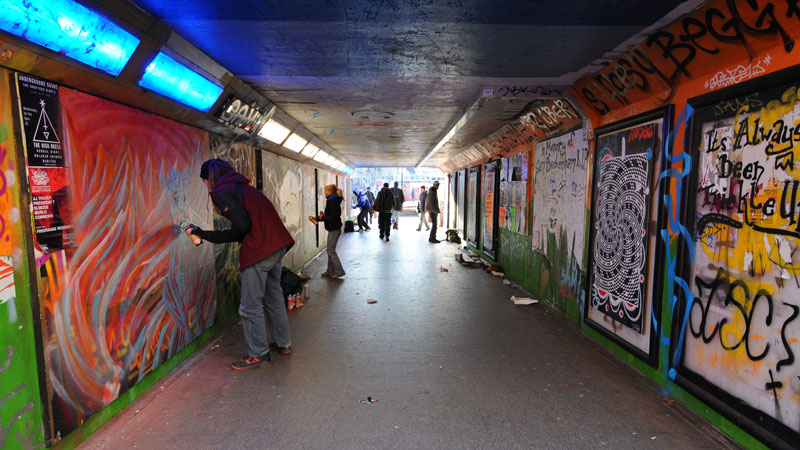 The authorities could be said to have something of an uncomfortable relationship with Bristol’s graffiti community.

With the city council sometimes treating graffiti art like a blight on the city and other times celebrating it as a vital – and lucrative – part of Bristol’s cultural heritage, graffiti artists can find themselves uncertain of where they stand.

That could be about to change. The council and a few street artists are cautiously collaborating to create Bristol’s first citywide system of legal graffiti walls, where artists and taggers can paint without having to watch out for the police.

“What we want to do is what an awful lot of people in the city would like, which is for the city to be cleaner and tidier,” said Kurt James, who is leading the campaign.

But local graffiti artists Georgie and Benoit – aka object – recently challenged the campaign’s hardline stance on graffiti and they’re now in talks to create a new deal for Bristol’s graffiti community. “You can’t have a zero tolerance policy with graffiti when you’ve got Upfest bringing thousands of people through Bristol,” said Georgie.

She and Benoit suggested ways that the council could work with graffiti artists instead of against them. “If you just go head to head you end up with a massive waste of time,” she said.

The latest meeting was attended by Kurt James, deputy mayor Estella Tincknell, Georgie and Benoit, with mayor Rees and cabinet member for neighbourhoods Asher Craig joining briefly. After providing the council with a list of more than 50 potential locations, Georgie and Benoit have been tasked with narrowing it down to a shortlist of walls across the city to use in a pilot project, before the lengthy process of contacting landowners and getting permission can begin. They were warned that “the council wheel turns slowly”.

“If they want to drag their feet, then nothing will get done because they’ll run out of time and then they’ll be out of office and then the next people will start again… or will have a different idea,” Benoit told Bristol24/7.

But on the whole, the mood seems to be hopeful. “We still have more work to do to define what this will look like and how it will work, but the commitment is there to do this,” said Kurt.

Georgie says that there are a lot of neglected buildings around Bristol, that would benefit from a repaint: “Some people are actually doing a favour by putting art up. A building that’s allowed to go derelict is itself is a form of vandalism. People have to live there, they have to live with that dereliction,” she said.

Rob Dean, founder of walking street art tour company Where the Wall, says that the graffiti art is one of the things that makes the city such a popular destination and helps us win so many ‘best city’ awards, like the recent one from travel comparison site Momondo. Stokes Croft, one of the ‘blighted’ areas the council wants to cover in anti-graffiti paint, was recently named one of the hippest areas in the UK.

“For many years Bristol didn’t really have a specific focus for its tourism, quite like Bath had the history, and the street art with Upfest creating a global focus in the summer meant that Bristol did have a bit more of a USP,” said Dean.

He says that graffiti artists need to have a space where they can practice and improve their craft without fear of repercussions: “I think it’s going to have a devastating effect for people that paint on the streets of Bristol if their work is deemed illegal and needs to be removed.”

James admits that the graffiti scene brings in a fair bit of revenue from tourism. “We’ve got places like Stokes Croft, which are tourist magnets. We’re very much on the tourist trail, with lots of visitors being taken around the city, being shown graffiti, and it’s a part of the culture of the city,” he said.

Stephen Hayles, founder of Upfest, Europe’s largest live graffiti festival, agrees. “I think (the street art scene) is flourishing. It’s part of the makeup of the city. A lot of it stems from just how creative Bristol is, the underground music scene and the underground art scene,” he said.

But James says that doesn’t give artists carte blanche to paint wherever they like. “The Banksy stuff and other notable artists of the city all feature of part of the city fabric, but linked to that we have a large number of instances of tagging people’s front doors, walls, windows, over public furniture, public buildings, churches… and people don’t like it.”

Around nine months ago, the council started a clampdown on graffiti. Artists who had been painting on unofficially allowed walls for years, suddenly found themselves being questioned or arrested. Graffiti artists got more cautious about where they painted, leaving just the taggers.

Hayles said that the crackdown has ended up making some areas look worse. “The artists that paint legally – probably the sort that people would associate with doing pieces that are of a better quality – they’re the ones that have basically been driven out of an area like Stokes Croft.

“As you lose those tolerated painting areas, the artists that could take their time over a piece are the ones you lose. The taggers, continue to do it because they’ve painted illegally all their lives.”

Ambiguity in the council’s graffiti policy has been blamed for a lack of understanding about where artists are and are not allowed to paint. Walls where painting has been tolerated for years – and some with longstanding permissions – have suddenly seen a crackdown in arrests and prosecutions. With no public graffiti policy – something James says they’re working on – graffiti artists don’t know where they stand with the law.

The introduction of a mapped system of legal walls across the city aims to address that ambiguity and open up a conversation between the graffiti community and the council.

Not everyone is happy with the way the collaboration is progressing. Chris Chalkley is founder of the People’s Republic of Stokes Croft and art director of the Bearpit Improvement Group, both community interest groups closely linked to the graffiti scene. He thinks that the council needs to better engage the local graffiti community.

“We’re missing the opportunity to have a conversation about how the city should look. It needs to be a much bigger conversation,” he said. “There’s an enormous lack of understanding that takes place here. The tag community, the police, the council… there are inherent tensions that need to be worked out.

Chalkley says that the PRSC have been sourcing spots for people to paint on for years, getting permission from landowners and organisations, and have been in several conversations with the council about legalising graffiti walls. He’s concerned that the council is trying to silence the PRSC and the Bearpit Improvement Group by only working with a couple of artists on something that affects the whole city.

“We have to allow the positivity of positive, rather than this continual war of attrition where we paint out and we attempt the stop, we actually have to embrace.”

All photos by Harry Bristol