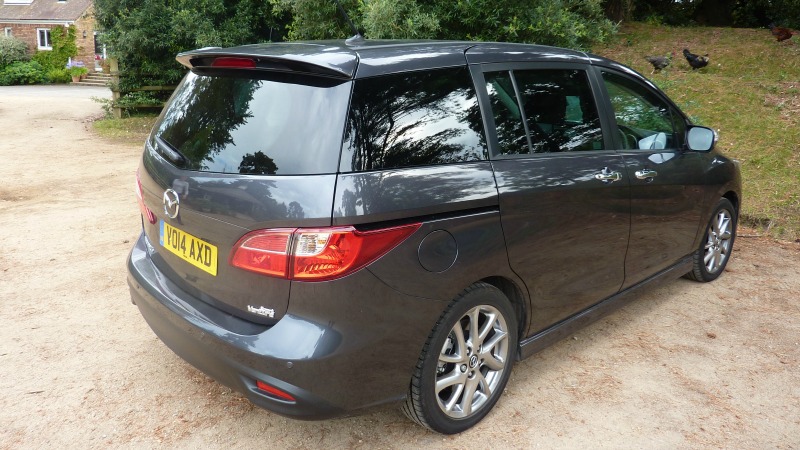 Sliding doors are a great benefit. I’ve never considered this until now. But as we’re crammed onto a cross channel ferry where unless you’re really scrawny you are unable to access your vehicle, such doors are a distinct advantage

While others have to patiently wait for other cars to move so that they may gain entry to theirs, we simply pull the rear doors of the Mazda 5 and smile. We’ve already had a long difficult journey with our two young daughters, who are understandably fed up so late at night, especially after they have had to endure unexpected delays. But thankfully they can get into the back of the car and soon they are fast asleep.

With two young children it does become clear how awkward life can be just parking the car in a car park. Unless there is a parent and toddlers space available at your local Tesco car parks are not user-friendly at all for most vehicles especially if car seats need removing. Again this is not a problem in the Mazda 5 and it is a joy to park in such situations. As is the side of the road or indeed any other awkward situation.

The drawback though is that if Harriett decides to be awkward, and believe it or not the little cherub can be at times, she can actually open the sliding door from inside and there’s nothing we can do about it. Here’s the scenario: Harriett is tired and irritable. Caroline puts her in her childseat and shuts the sliding door. As Caroline gets into the front seat, Harriett opens the sliding door. Yes, I can lock all the doors from the driver’s seat but then Caroline is left locked outside! The only way round this that we can find is to restrain Harriett. The folding rear picnic tables help entertain her, though and she does enjoy putting her apple on hers.

It’s certainly a capable vehicle with a cavernous boot, large enough for our tandem pushchair and luggage. It is also possible to transport seven passengers thanks to a third row of seats tucked under the floor in the boot.

Although the diesel engine is audible from inside especially under pressure it is a good driver’s car, too with a reasonable amount of torque making it a capable overtaker. Cruise control is always helpful when travelling down the motorway, especially at night when there’s less traffic about. Over the course of the test in Jersey it returns around 38mpg. Other bonuses are the folding armrests in the front and the power folding wing mirrors, again ideal for tight spots.

“Never before has there been so much choice and while the Mazda 5 may not be the first to spring to mind it is worth considering,” says Parkers, the car experts. “It has been seating seven since 2005 and has done a decent job of it too. This time it gets the full design overhaul with the look inspired by water, wind and nature. Basically, it’s got some flowing lines along the side of the car. The styling is an opinion-splitter but Mazda’s ‘family face’, also found on models like the 6 and the 3, is an improvement giving the 5 a sharper front end. While the manufacturer claims it will seat seven, squashing someone into the middle seat of the second row is not recommended and is best reserved for small children making this more of a 6+1 rather than a bona fide seven-seater. However, don’t let this put you off. The clever folding seats make the interior incredibly functional and practical, while you get the usual Mazda build quality and reliability. Engine options are limited to three – a 1.8-litre petrol with 113bhp was dropped during the car’s life cycle and in the end just the 2.0-litre petrol and 1.6-litre diesel were left in the range. The former has 148bhp for a sprint to 62mph in 11 seconds, while the latter means CO2 emissions as low as 138g/km and claimed average fuel economy of 54.3mpg. Not too shabby for a seven-seater people-carrier. In early 2013 a new Venture trim level was announced. Available in both petrol and diesel guises, the new specification includes rear parking sensors, a tyre pressure monitoring system, an automatic dimming rear-view mirror, sat-nav, Bluetooth connectivity, climate control, cruise control and a six-speaker stereo system.”

Economy: up to 54mpg