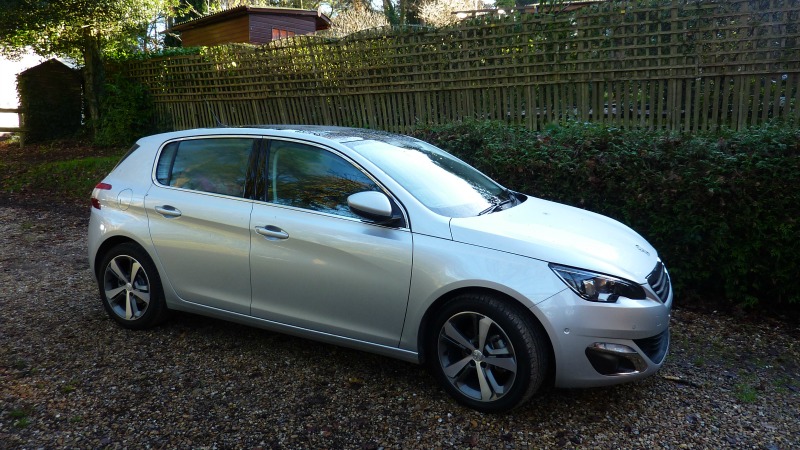 It takes something pretty special to become the Car of the Year. And this is what the Peugeot 308 achieved in 2014

It’s certainly a striking family hatchback and its side profile reminds me a little of the Mercedes A-Class, which can only be good. However, it’s obviously far better than that and during my time with it I have been surprised on many fronts.

Firstly, you would be forgiven for thinking that you were driving a sporty 1.8-litre or 2-litre but it is only powered by a 1.2-litre petrol engine. The engineers at Peugeot have worked overtime getting as much as they possibly can from this tiddly little unit, which produces a sporty 130bhp. Needless to say it’s a joy to drive and the smooth six speed automatic gearbox can even be driven like a manual should the mood allow. This is a feel good car; one in which the driver is equipped to tackle any challenges the open road throws at him. If extra oomph is required simply press the sports mode located to the left of the gearbox. While it doesn’t provide lightning performance it does increase the revs and a little ‘s’ appears on the dash. If conditions become icy there’s an ice mode to the right of the gearbox giving the driver extra security that the vehicle isn’t going to slide down the road.

With its comfy seats and bags of technology this is certainly a driver’s car. Many of the controls can be found on the centre console, home to the sat nav and the reversing camera. The heating controls for instance are operated from here. This is all very well but it is actually slower than the traditional manual dial I find. I still find that there is a delay when engaging the auto box and the electronic parking brake, which while easy to use, is not as attractive to me as a traditional handbrake.

The panoramic glass roof, a £500 option on the test model, is a fantastic addition because it makes the cabin light and airy. There’s an electric cover, too. We all agree that this roof should also be a sunroof because sometimes you want the option of being able to open the roof up. As cars become wider some speed bumps that are meant to be the width of a car forcing drivers to slow down are actually not wide enough for the 308, which for the driver is a joy but defeats the object of sleeping policemen.

The Pug is a versatile car looking the part no matter what the plan; family or business. It will transport a dishwasher to the tip, collect a load of logs and swallow enough luggage for a family get away.

“If you’re on the hunt for a family hatchback then the new Peugeot 308 needs to be on your list,” writes Parkers, the car experts. “There isn’t one particular stand-out reason for this but a host of smaller reasons that add up to a compelling case for the new 308 as your next new car. As any family knows you need great practicality, low running costs and a real value for money price tag. The 308 is claimed to have the biggest boot in its class, and it can stow significantly more luggage than the popular Ford Focus and company car favourite, the VW Golf.

“Running costs are kept low thanks to frugal and low-emission diesel and petrol engines, with the 1.2-litre petrol and 1.6-litre diesel particularly kind to wallets. The 92bhp diesel has an official average figure of over 78mpg so high 60s should be possible in everyday driving. However, it’s the arrival of the new petrol and diesel engines in Spring 2014 that promise even lower costs with a new 120bhp, 1.6-litre diesel with an official fuel consumption of 91mpg on average.”