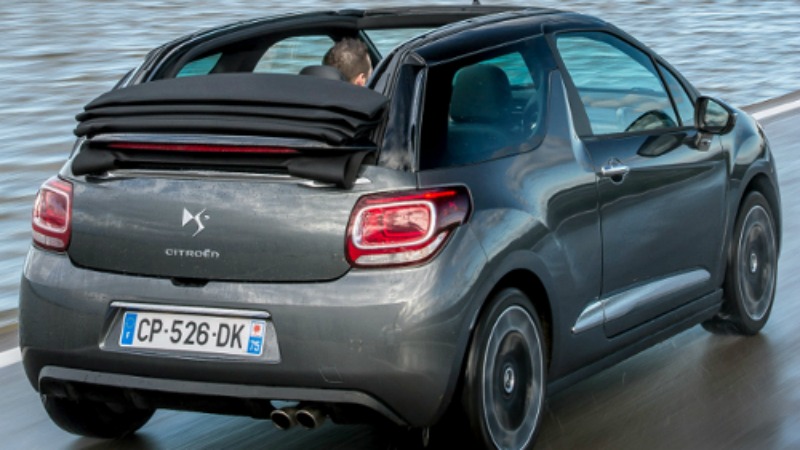 A five seat cabriolet with an electronically folding hood that can be operated at speeds of up to 75mph… these are the key benefits of the Citroen DS3 Cabrio, which is the only convertible in its class to accommodate so many passengers and to be equipped with a 245-litre boot and split folding rear seat.

This makes it probably the most versatile convertible on Britain’s roads today. That boot initially looks tiddly but after the lid is lifted it is large enough for a standard pushchair (with the rear wheels removed and packed separately in the boot), which I must say surprises me.

As I sit inside the top-of-the-range 155bhp model I recall testing a Lexus IS250C luxury convertible. I was at the traffic lights when the sun decided to come out and I pressed the button for the roof to go down. Almost instantaneously the lights went to green and I had to get moving.

As soon as the car moved the roof stopped going down and so I was driving with it half up and with part of the boot lid still open. I pulled over as soon as it was safe to do so. A ridiculous situation to be in and unsafe.

Thank goodness there is finally a convertible that is well suited to the British weather and to impatient motorists like me. Because the roof does not fold back into the boot but above the rear window, it makes it more practical all round, which is why the roof can be operated at speeds of up to 75mph.

The DS3’s high quality canvas roof compliments the bodywork and to the unknowing it appears to be simply a hot hatch, but we know otherwise.

On first acquaintance the vehicle looks just like the DS3 coupe. My test takes place in the middle of winter with lashing rain and much to my wife’s distaste I have to experience driving with the roof down. Controlled by a button on the overhead console, the hood opens and closes in just 16 seconds flat, which is just as well because when the weather gets too unbearable that roof just has to go up.

It’s just as well that it is fitted with a hardwearing interior that features leather seats and much plastic, which copes with excess rainwater well. But the great thing is that with the air conditioning turned up to maximum heat you can enjoy all the benefits of open-top driving. When the DS3 Cabrio’s roof is open, an aerodynamic front deflector reduces wind noise and deflects air currents to prevent buffeting.

The sophisticated Infinite Blue roof material is in blue and violet, created by a weave of three different coloured threads. One of these is shiny, with each thread reacting differently to changes in light conditions.

Inside the two-door DS3 Cabrio is a distinctive and sophisticated cabin which includes a all-new upholstery choices, including Granite Blue leather, while there is white LED ambient lighting around the ceiling console and white lights in the instrument cluster.

The trouble is that although it is marketed as a five-seater, with the best will in the world it doesn’t fit five adults in comfort. Even with our two child seats in the back it is necessary for the front seats to be pushed forward, uncomfortably so for the driver, making it fine for short distances but not longer. The ideal scenario is for three little scamps in the back and then the adults in the front have a reasonable amount of legroom.

At just 3.95m long the DS3 Cabrio is compact enough to get into tight parking spaces, which is extremely important where I live because the council has taken it upon itself to put double yellow lines almost everywhere making the lives of homeowners who do not have driveways and commuters trying to dodge extortionate parking charges, ever more difficult.

It’s a gutsy, fun car to drive with plenty of power, if required. As with all convertibles it makes a great second car.

Facts at a glance