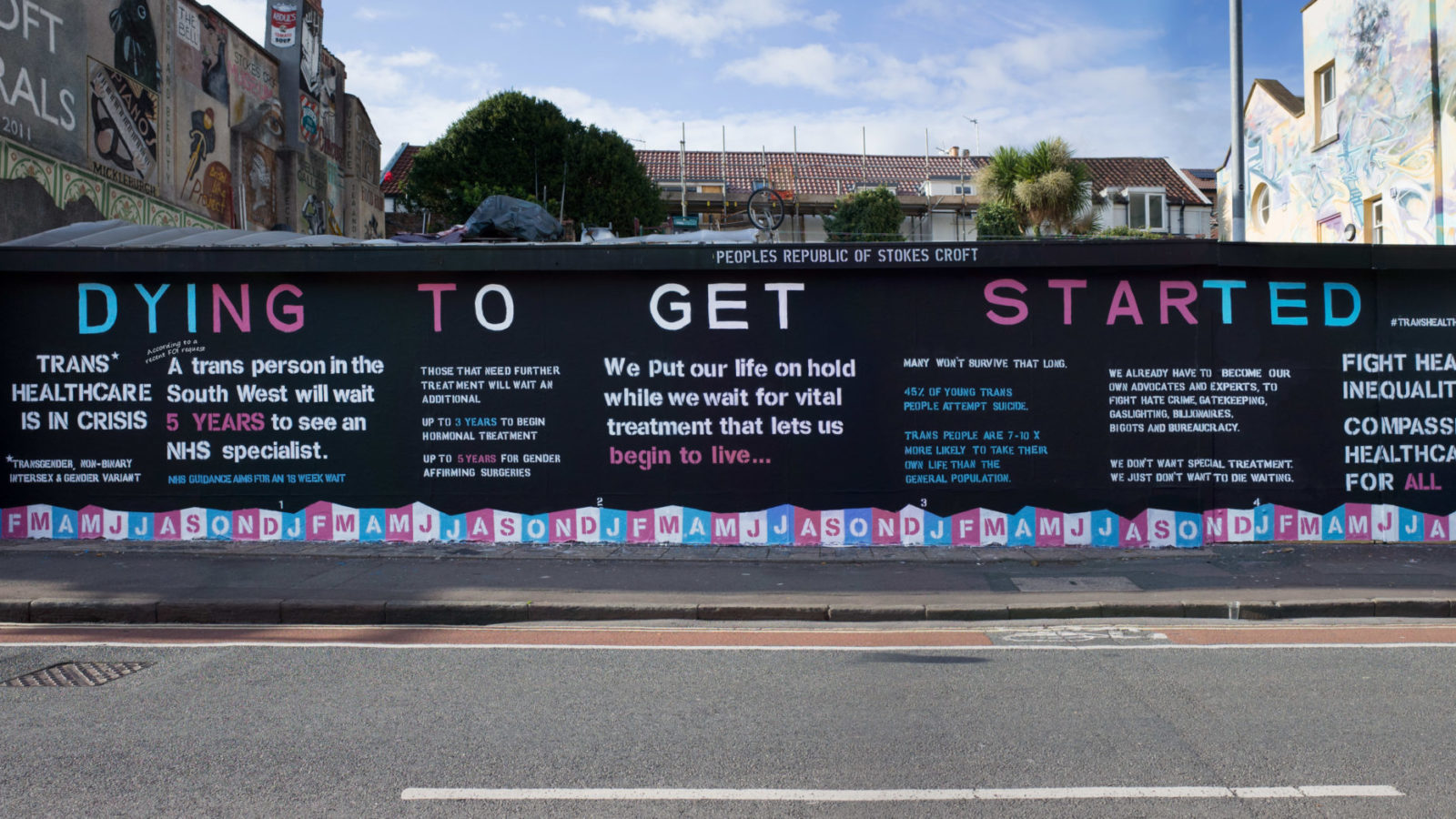 “This mural is an attempt to shine a light on the shocking state of healthcare for transgender and non-binary people,” says CJ, who is behind the latest piece of artwork on the large wall by the People’s Republic of Stokes Croft (PRSC).

“It’s one of the most pressing issues affecting us across the country and particularly in the South West. It paints a pretty bleak picture but unfortunately that’s our current reality.”

The mural, painted onto a wall that has recently been used to show what life is like for Black people in the UK and to thank key workers, has been painted with statistics about healthcare for trans people for the duration of October.

CJ, who works for PRSC – which also looks after the wall – wanted to focus on trans healthcare as it’s an issue for many members of the community.

“Everyone who helped to paint the mural has so much love for the NHS as an institution but feel that as a community we have been roundly disregarded for many years as the waiting lists have spiralled to the current appalling state,” CJ explains. 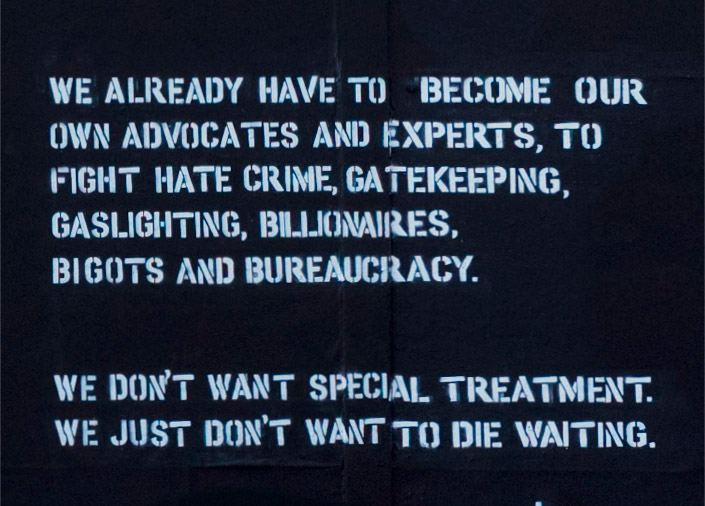 “These failures of the system are causing very real harm to a vulnerable population”, says CJ

Trans and non-binary people will wait for at least five years to see an NHS specialist, which is the support needed in order to medically transition. Physical transition is different for each trans person, but often includes hormone replacement therapy and gender affirming surgery, such as facial feminisation for trans women.

The NHS aims for an 18 week wait for referrals, a sharp contrast the current five year wait for trans and non-binary people. After referral, patients will wait up to three years to begin hormonal treatment and up to five years for gender affirming surgeries.

This is an overall wait of up to a decade for some trans people to receive the help they need.

“It’s the reality that after getting a referral from your GP, usually after a long period of challenging and often painful introspection, you will be cast off into a wilderness of no contact or support for an indeterminate period of many years,” says CJ, who lives in St Paul’s.

“People knew it had got out of control but to see that figure is just so disheartening.” 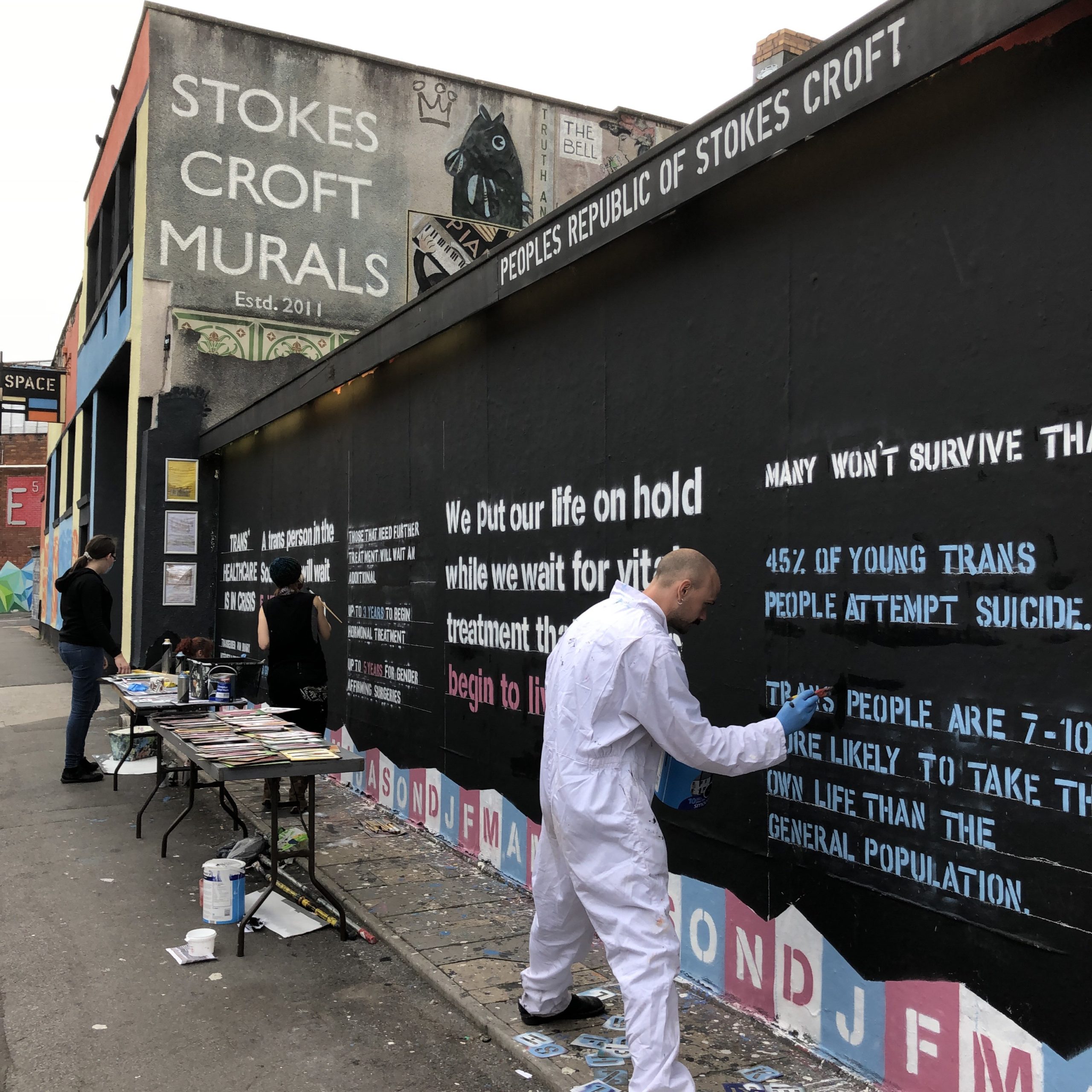 The wall design was gridded out, then stencils were used for the lettering

The hope is that painting a mural in such a prominent space will raise awareness of the difficulties faced by this part of the LGBTQ+ community.

“Every month we have a new and exciting piece on our outdoor gallery mural wall,” CJ says.

“We feature beautiful, interesting and challenging artwork as well as political and protest pieces, and the artists and organisations responsible and the issues covered are diverse and important.”

The mural will remain on the wall until the end of October.

“It’s a difficult time to call for a increased healthcare provision in the middle of a pandemic,” says CJ. “Of course we recognise that the NHS is already stretched to near breaking point on the back of vast underfunding from the government but this isn’t a new problem. These waiting lists have been spiralling for the last decade.”

“These failures of the system are causing very real harm to a vulnerable population,” says CJ. “The letters along the bottom are months represent the five years that trans people have to wait for our first appointment.

“The rest of the piece is an attempt to explain a little about the realities of living as a transgender person in what can feel like a very hostile world.”