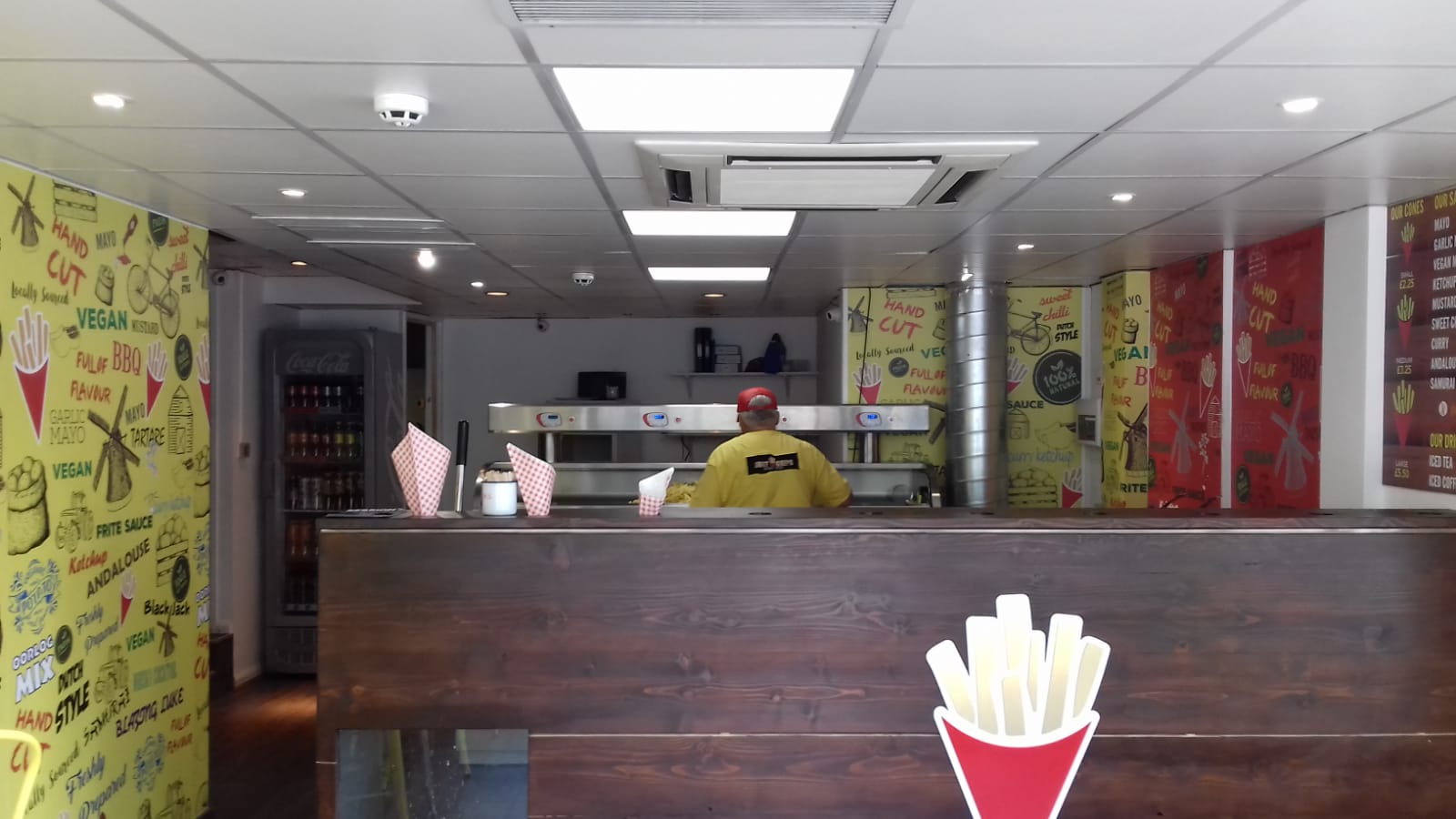 For a city full of ambiguous restaurants, you can’t fault the name of Just Chips: uncompromisingly accurate, that. This city centre takeaway, just a few doors along from the Hippodrome, does – you guessed it – interpretative pan-Asian cuisine. Nah, it’s just chips with sauces squeezed on top. It’s hard not to feel warm towards the look-you-in-the-eye-and-give-you-a-firm-handshake honesty of its name; it would be like calling a new Chinese restaurant Peking Duck & Pancakes.

The trouble is that by being so unambiguous with the name, you’ve already isolated a considerable proportion of potential custom – the non-chip fancying kind. Chips, after all, even the jumped-up, triple-cooked, Heston Blumenthal variety, are not a complicated foodstuff. And any cravings for them are similarly unnuanced: you either fancy some, or you don’t.

And when I visited during a recent lunchtime on a screamingly hot day, it seemed few people did fancy them. It was just me and the owner alone throughout the entire time it took to fry my chips. “We get people coming in and asking for kebabs,” he confided. “We have to tell them we don’t do them and that we close at 11pm.” 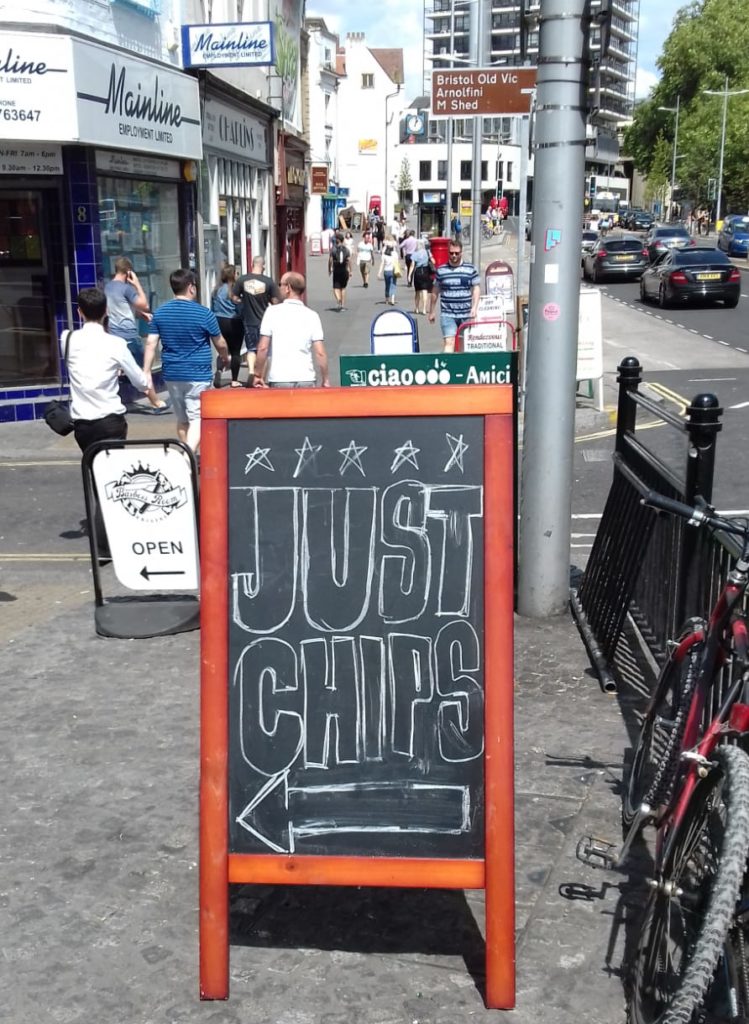 I could see his dilemma: this stretch of St Augustine’s Parade is a honey-trap of late-night eateries that ensnare weary revellers craving carbs and mystery meats. Offering only one half of that equation is a risky business move. The exceedingly simple menu offers Dutch-style chips in three sizes (£2.25 for a small cone, £3.25 for a medium and £5.50 for a large) with your choice of sauces on top, from the usual mayo, BBQ, mustard or sweet chilli, to the hybrid (curry ketchup), fantastically named (Blazing Luke) and downright bizarre (whisky cocktail). Soft drinks are also available.

The takeaway’s resemblance to the average kebab house was unmistakable, with just a single yellow metal table and two chairs to sit at along with some stools in the window. The rest of the is unit filled with a massive wooden serving counter emblazoned with a cartoonish cone of chips. The bright yellow Dutch-themed wallpaper, complete with windmills and bicycles, was a nice touch, as was the posh toilet around the corner. But it was hard to avoid thinking that the owners were fighting a losing battle in not catering to the late-night brigade. 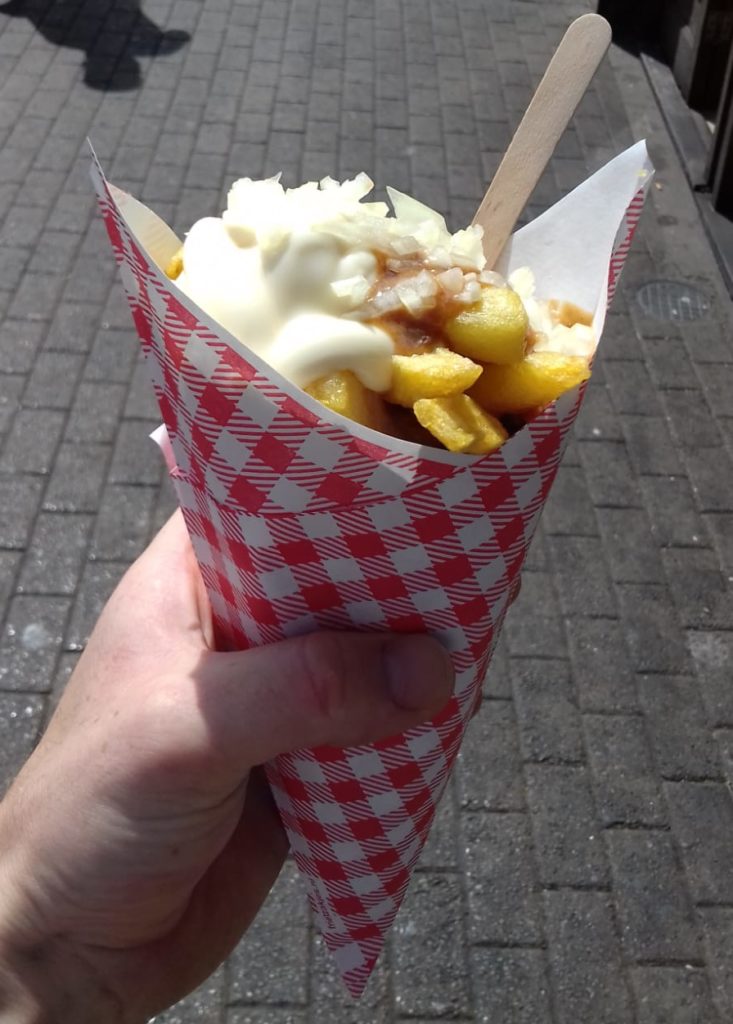 Chips come in a paper cone with your choice of toppings

When the chips were ready, they were presented in a paper cone with a fork stuck in and a generous squeeze of mayonnaise and satay sauce on top. Chip shop-thick and not too greasy, the sauces complimented them nicely and made for a cheap and easy lunch on the Harbourside, batting away wannabe chip-stealing seagulls.

It’s early days for the takeaway that only opened a little over a week ago. In fact, the bin had arrived only just before I had, and the owner proudly pointed it out in the corner. As for whether the chips are authentically Dutch-style, it’s hard to tell. It’s the potatoes that are Dutch, it transpires – not the owners: “We’re three Greeks. We love chips with sauce, though.” 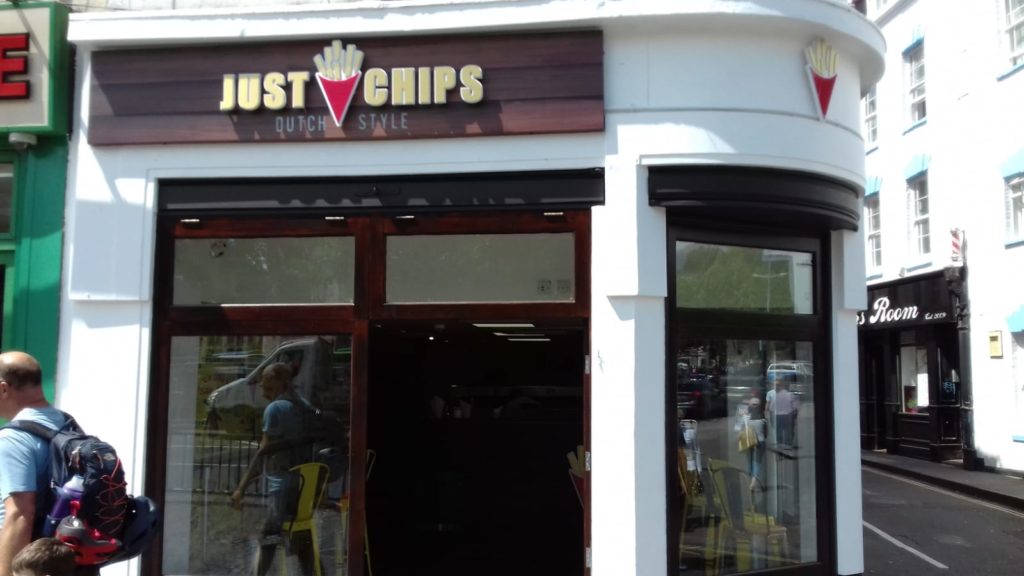