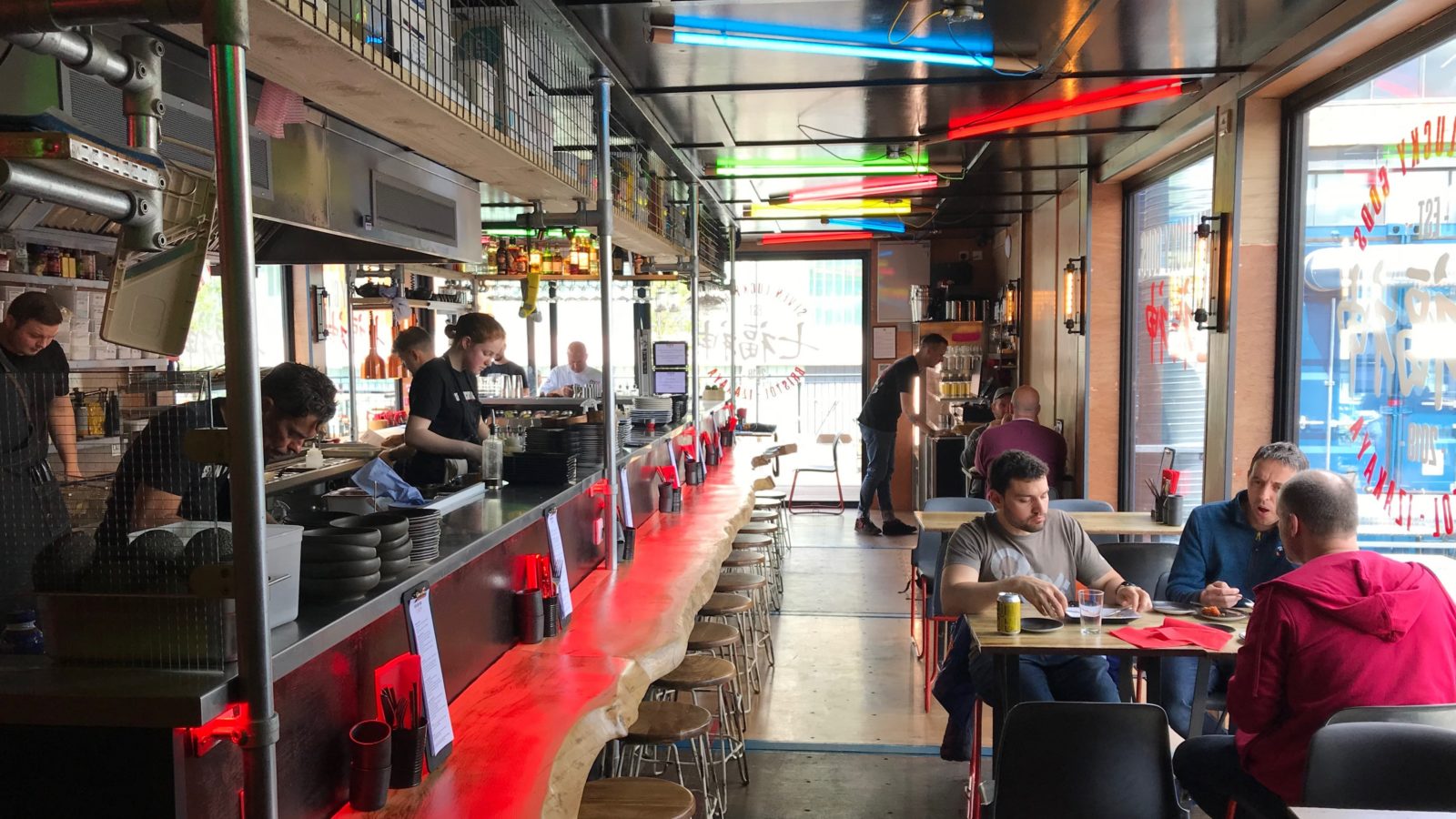 The sound of knives being sharpened came from the kitchen of Seven Lucky Gods on a recent Thursday lunchtime.

It’s a kitchen that on its own is larger than many of the other businesses in Wapping Wharf; and so much larger than most of the other restaurants in this corner of Bristol that I did a double take when a few chefs reentered the dining room through a back door.

The pair of businesses also share a Japanese theme, with Seven Lucky Gods from the experienced team behind the likes of The Ox and Bambalan promising Japanese fusion style food and drink inspired by the izakaya bars of Tokyo.

With colourful neon strip lights hanging from the ceiling and a long wooden bench looking like it has been hewn from a single tree facing the kitchen, Seven Lucky Gods is also one of the coolest spots in Wapping Wharf. 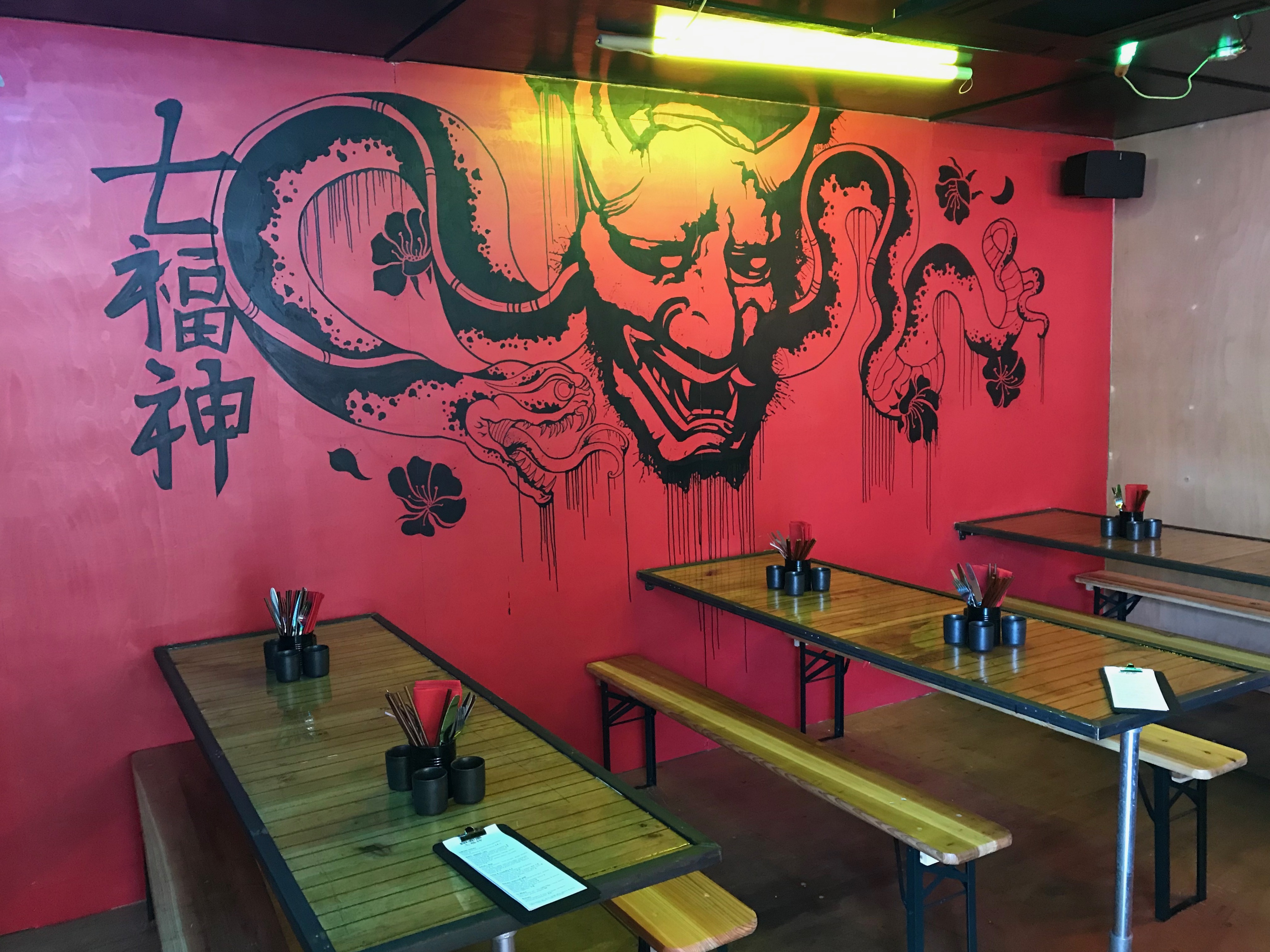 The menu is divided into izakaya snacks; sushi, sashimi and raw; salads and veg; crisp and crunchy; and robata charcoal grill. The food arrives on the table when it is ready.

For those with an appetite as big as their bank balance, a 500g dry-aged Tokyo T-bone steak is also the one item currently on the ‘to share’ section of the menu, priced at £50.

Sharing is the best way to eat and drink here, with carafes of sake available – one of the best selections in Bristol of a drink that is currently having a moment in the spotlight.

The five different sakes and four different Japanese whiskies also feature as single measures or within cocktails that all cost £8.50, with my own drink being Asahi Super Dry beer on draft, and all the wines on offer served by the glass or bottle. 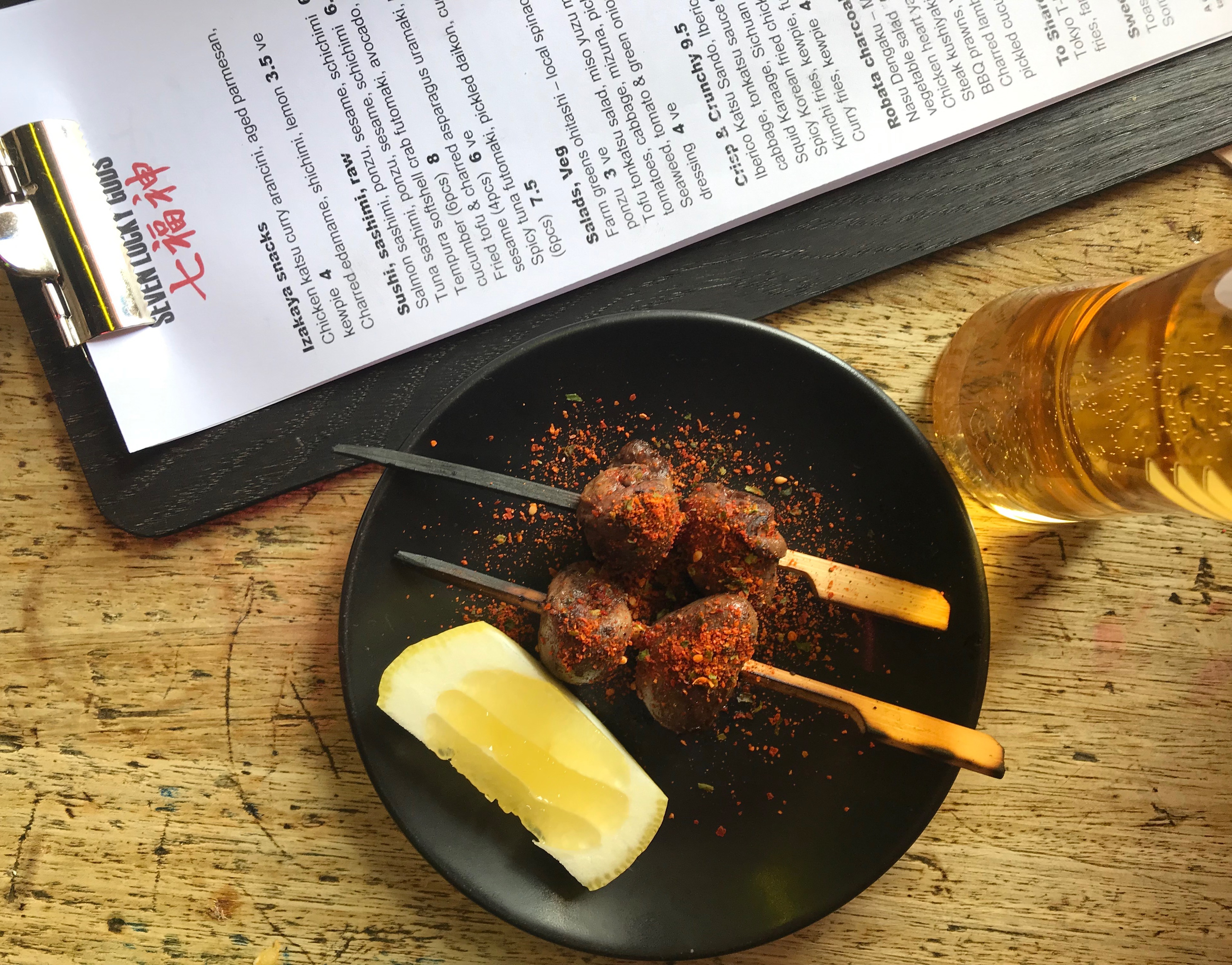 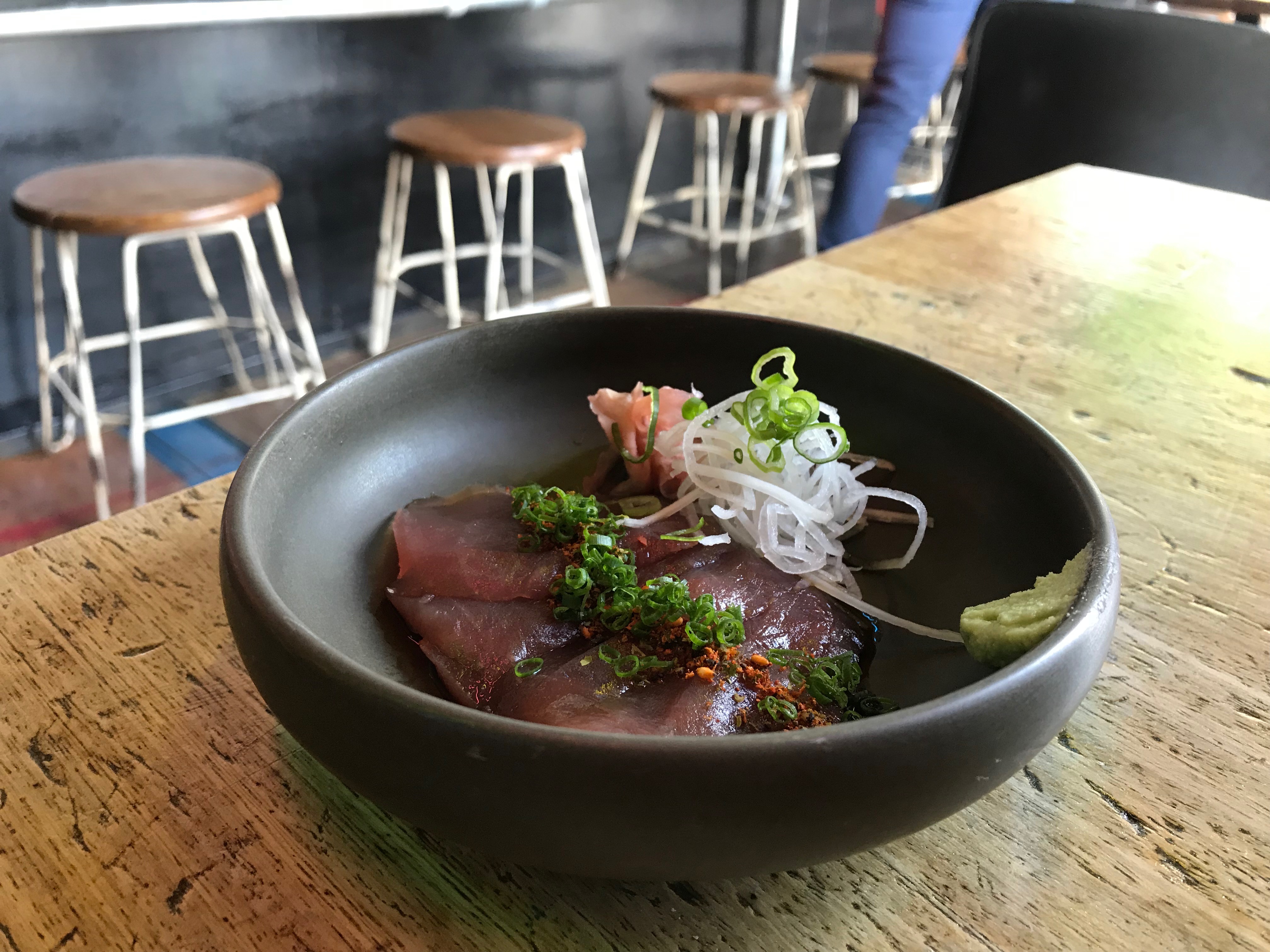 First out of the kitchen, which on Thursday was being expertly marshaled by Hyde & Co executive chef Todd Francis, was the tuna sashimi (£6.50) with ponzu (a classic Japanese citrus-based sauce with a tart-tangy flavour similar to a vinaigrette), sesame and shichimi (also known as seven spice so fitting here).

The raw tuna was thinly sliced with the help of those sharp knives, and tasted fresh and vibrant.

Next, four small chicken heart yakitori (£4) came on a wooden skewer now familiar from Woky Ko, with these blackened at the end from the robata charcoal grill. Slightly chewy, they were accompanied by schichimi and tasted better with a few dashes of lemon juice.

Chicken katsu curry arancini (£4) the size of golf balls came with aged Parmesan sprinkled on top. The pair of arancini were balanced on rich and creamy Kewpie mayonnaise – an absolute staple of Japanese homes.

Squid karaage (£7.50) – a bento box favourite, crunchy after being deep-fried – was served with Sichuan salt and pepper, and aioli. There aren’t much better accompaniments to an ice cold beer than this.

I couldn’t help but chuckle when a group of ladies-who-lunch came in from the terrace outside when it started to rain, and were seated directly underneath a speaker playing a decidedly post-watershed hip-hop soundtrack of Dr Dre, Jay Z, Eminem and Notorious BIG.

But it didn’t matter in the least to their enjoyment of this superb new addition to Wapping Wharf. They shared more of this food just perfect to eat in a group and ordered more beer. 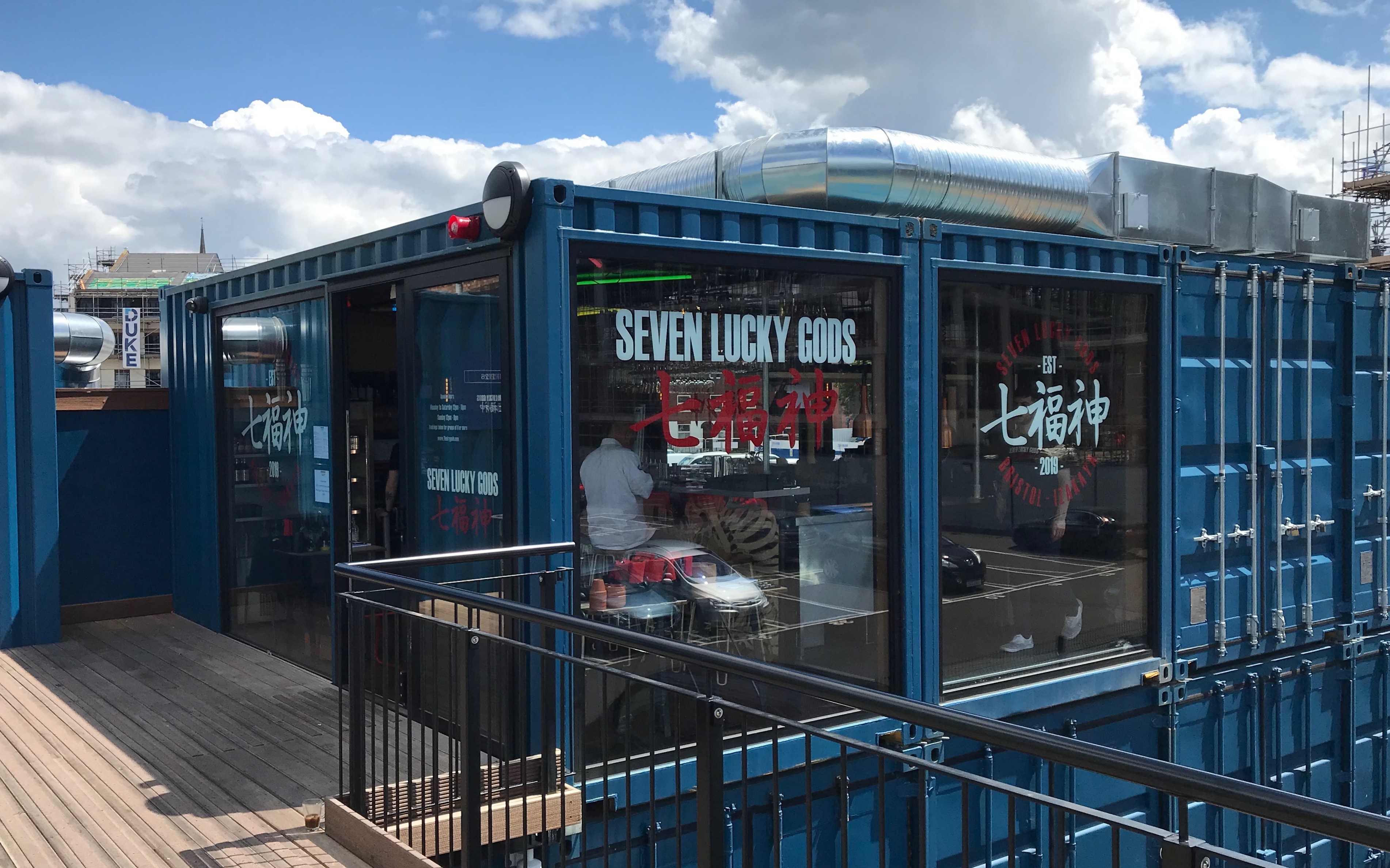