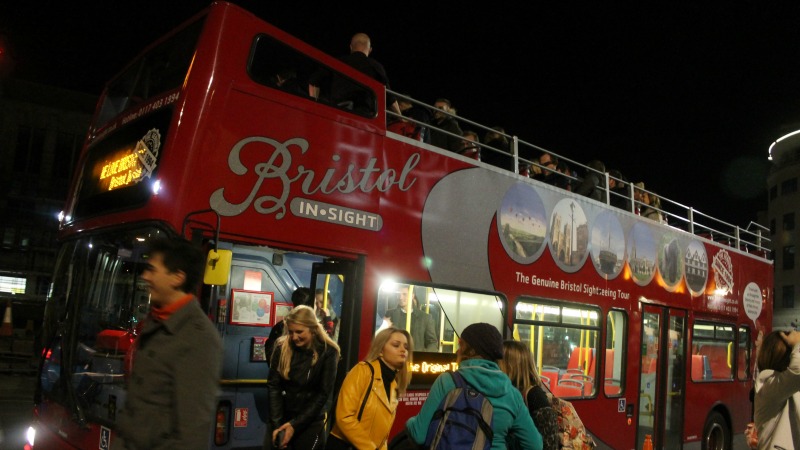 “If anything spills, it’s on you. You chose to drink alcohol on a bus.”

This year’s Bristol Cocktail Week once again celebrated the city and its residents’ taste buds, with 20 cocktail bars teamed up to create a series of special events. One of the final events was billed as ‘A Drinker’s Guide to the City of Bristol’. All aboard the cocktail bus.

If The Apprentice were to be relocated to Bristol, we might be the unwitting customers in the week of the guided bus tour challenge. Sitting on the open-top deck of a bus with leaking tubs on our laps, I’m not sure this would be exactly to Lord Sugar’s tastes, but it works a treat for the full bus of young professionals.

Our tour guides Greg and Danny are loud, friendly and have delightfully bad humour that gets funnier the more drinks we down.

We’re handed paper bags as we’re welcomed aboard. It’s not quite as classy as first imagined, with a distinct last minute feel to the preparations. A peek inside the crumpled bag reveals four numbered sample pots that we have to be convinced don’t contain urine.

The pots aren’t exactly water-resistant and within no time, everyone’s hands are covered in the sticky residue of spilt rum, gin and sherry.

Downstairs is warmer but upstairs is more fun, we’re told. Blankets are offered to the brave, first come first served. We grab one and head up to the open-top deck.

Greg and Danny are masters at leading a drunk night out, as they quickly get everyone cheering and shouting out before we’ve even opened the first pot.

As we set off from outside the Milk Thistle, we’re allowed to open urine sample #1. Our guides chuck out questionable facts as we go, linking the city with the beverages, continually reminding us that they’ve only just googled this stuff on Wikipedia and are making half of it up anyway.

If you manage to juggle the full pot on the swerving road, the first drink is Death’s Door gin, Cascade spirit with coffee infused Aperol, tonic and rose infused lemonade. Gin was drunk often when water was too dirty in ye olde days, and it was dirtiest in London (big cheers every time one of our guides shouts abuse about London), leading to gin often being called water.

Supposedly someone then said that if gin was water in London, sherry was milk in Bristol. This led to the creation of the sherry, Harvey’s Bristol Cream, which takes us onto the second drink of the night.

We go down the Floating Harbour by Spike Island. We drink Fino Sherry with pineapple syrup. It’s topped up with Prosecco which Greg rather impressively opens with a swoosh of a sword off the side of the bus.

Up past the Clifton Suspension Bridge then on to the Downs. As everyone is hyped up on spirits and shouting, a dubious half-fact about Jon Bon Jovi leads to us singing Livin’ on a Prayer. I can only imagine we sound like a chorus of angels floating past Clifton.

Everyone on one side avoids being attacked by trees on the Downs as the others look out for doggers, cheering at any and every parked car we drive past. Did I say how classy the humour was?

As we pause near the Sea Walls for a loo break – only for the very brave or very weak-bladdered in the spooky public toilets lit mainly by iPhone torches – we try to gain some heat by opening the penultimate drink. This is Cognac with hibiscus and rose hip tea, orange flower and cardamom tincture. The fiery brandy’s warmth is very welcome, as fingers start to freeze in a curl, grasping the sample pots.

We round back to our starting point as the gin, sherry and brandy start to mix. Legendary late night food van and best pun in Bristol, Jason Donervan, gets the biggest cheer of the night as we pass the Triangle. Here we have our final drink, rum and chocolate milk. It’s a warming, comforting mixture and feels like the perfectly strange pudding to end this surreal evening.

Hosts Greg and Danny are wonderfully amateur in their tour and everything is to be taken with a pinch of salt, but they clearly ooze with alcohol know-how. It may not be the most historically accurate tour you’ll ever experience, but it was the most unique and definitely the most fun.