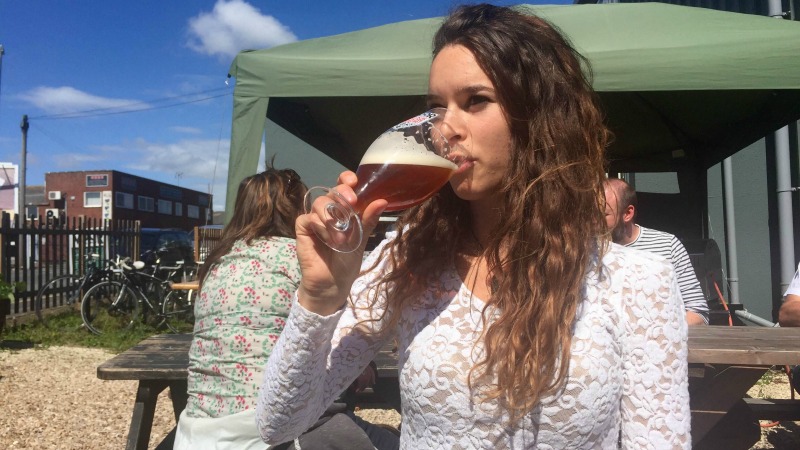 Beer is big business in Bristol, and this year it has got even bigger.

From bottles to cans, breweries to brewery taps, kegs to casks, and lagers to sours, Bristol’s beer scene is the envy of the rest of the UK and was celebrated once again this year by Bristol Beer Week at venues across town and also the first edition of Bristol Craft Beer Festival at Motion.

Casamia’s decision to serve Moor Beer in cans at their Michelin-starred restaurant was a sure sign that change was afoot, with Moor also becoming the first brewery in the world to be granted CAMRA’s real ale accreditation for canned beer.

Two of this year’s highlights from the St Phillip’s brewery were Agent of Evil and Guardian of Peace, special brews to celebrate their love of a galaxy far, far away.

Both were sold in 330ml cans and keg

Left Handed Giant also started selling their beer in cans, with beer fans now having much more choice from where to purchase their favourite brews. Bristol Beer Shop opened in a former pub on Fishponds Road and Corks at Cargo joining the likes of old favourites including the two other Corks, Brew on St Nicholas Street, Grape & Grind on Gloucester Road, Love To Brew in Brislington and The Beer Emporium in the heart of King Street’s Beermuda Triangle as some of the best places in town to buy beers to drink at home.

Delis such as Salt on St George’s Road in Hotwells, and No. 12 Easton and No. 25a Old Market are also well worth visiting for their selections of locally brewed bottles and cans.

We can’t get enough @Cranebeer so we’ve got in their new brew, ‘Halo’ – a hoppy, fruity, refreshing 4.5% pale. Will sell fast so hurry! ðŸ™‚ pic.twitter.com/l1IAo8PHdm

Biggest is not necessarily best but Lost & Grounded chose to go large when they opened the city’s largest brewery in St Anne’s in August. Neither Alex Tronsco nor Annie Clements are from Bristol (American Alex met Australian Annie in Oz), but picked the city in which to found their business for a number of reasons, not least the burgeoning beer scene.

“Like any new business we have had ups and downs, but we now feel we are just starting to hit our stride,” said Alex, who was formerly the brewing director at Camden Town Brewery.

“The beer scene in Bristol is diverse, exciting and vibrant with many local bars, pubs, restaurants and stores working with and supporting our independent breweries. From cask to keg, from lager to sours, Bristol brewers are making it all and making it well.”

Alex promises to continue striving “to be innovative, creative and will keep pushing ourselves to make world class beer”. Expect more events at their brewery on Whitby Road, more collaborations and the first beers coming out of barrel ageing.

Thank you to all who attended our Tasting event last night. We hope you had a fantastic evening, we had a blast! ???????? pic.twitter.com/e3TFiWFic6

2016 was also the first year of Good Chemistry in St Phillip’s. “There’s nothing quite like seeing your own beer on the shelves and seeing people enjoying it in the pub,” said co-founder Bob Cary, who previously worked for Great Western Brewing and Wiper & True before founding Good Chemistry with Kelly Sidgwick.

“But probably the most rewarding thing has been opening the brewery up for events. We’ve really enjoyed the opportunity to talk to people face to face about our brewery and about the beers we make. We were so pleased that events such as the East Bristol Brewery Trail attracted people of all ages, loads of families, and many people who didn’t previously consider themselves beer drinkers but came for a fun day out.

“Bristol’s beer scene is very strong at the moment and a lot of that is down to the people of Bristol and their keenness to buy local. We’ve had great support from independent shops, pubs and bars in the city who know that their customers want to buy locally made beer and are proud of what their city produces.

“The beer scene is also helped by the real sense of community amongst the Bristol breweries. We’ve had advice and support from our ‘competitors’ whenever we’ve needed it, but we also work together and support each other’s events.”

One of this year’s events at Good Chemistry

Another of this year’s new breweries is Cocksure, whose first beer in their range, P’ALE, is a 4.5 per cent sessionable pale ale in 330ml bottles. Calum Doutch and Dan Snow first contract brewed to test the market and have since purchased their own kit and moved into premises in Thornbury, establishing a customer base locally including with Pieminister, Three Brothers and North Street Standard.

Cocksure alo launched a partnership with Farm Africa with their Give A Cock A Home project. For every case of beer sold, they donate 25p to help fund the purchase of cockerels, chickens, coops and feed to help families in need in Africa.

“The Bristol beer scene for us is great, and growing,” said Calum. “This is mainly the reason we chose to situate ourselves in a city with a vibrant and knowledgeable consumer, and one we know pretty well ourselves.

“With an array of bars, pubs, restaurants and bottle shops all now serving great craft beer, the consumer has real choice which is fantastic news for the craft beer category as a whole. We cannot wait to add to the buzz which is already in the city, and make Bristol even more of a destination for beer lovers.”

Cocksure will be opening a brewery tap in 2017 and they certainly won’t be the only brewery doing this, with Bristol Beer Factory, Dawkins and Incredible Brewing Co among the local breweries set to follow the success of Moor and Left Handed Giant.

Glen Dawkins of Dawkins has seen bottled beer sales go from virtually nil 12 months ago to some 15 per cent of their output by the end of this year, mainly through the many specialist shops and restaurants in the Bristol area.

“It is an exciting time to be in brewing, especially in Bristol which has seen an explosion of choice in recent years,” Glen said. “More and more people are asking for well-made, independent and locally-produced food and drink. Beer is at the forefront.”

The beer that Glen says he is most proud of in 2016 is Easton Promise.

Brewed in collaboration with the East Bristol Hops collective of more than 60 amateur growers who cropped enough locally-grown ‘wet’ hops in September to cask-hop a batch of the beer.

“The aim is for the beer to use 100 per cent local hops over the next couple of years,” Glen said. “It’s an exciting project as ‘wet’ or ‘green’ hops must be brewed after picking very quickly to retain the volatile oils. Hops are usually supplied dried for consistency but part of the fun is the unknown! Working with the growers was a fantastic added benefit.”

Another of this year’s most intriguing beers was Bread Pudding from Wiper & True, the first beer the St Werburgh’s brewery made using surplus bread, made for Bristol Beer Week in collaboration with Toast Ale from east London.

Wiper & True’s Bread Pudding and Milk Shake, which launches at the Milk Shake at the Hillgrove on New Year’s Day

“Toast Ale’s mission to support the fight against food waste really inspired us,” said Martin Saunders of Wiper & True, who for the special beer replaced a fifth of the malt they would normally use with surplus bread from sandwich manufacturing – the equivalent to one slice of bread that would otherwise have been wasted in every bottle of beer.

To the malt, bread and hops was added brandy-soaked currants infused with bourbon vanilla and cinnamon along with lactose to create a rich, sweet and velvety amber ale evocative of a traditional bread pudding.

Over in Wrington, Spun Gold from Twisted Oak was a finalist at the Great British Beer Festival, with their beers now available at the Old Stillage, the Lansdown, the Christmas Steps, the Hare, the Windmill and the Cornubia.

Twisted Oak’s Keith Hayles said: “We are loving the current Bristol beer scene and our traditionally made, top fermented, beer is going down extremely well with the Bristolians who clearly know a good pint of beer when they taste it. We can’t wait for 2017 when we’re planning on getting a little bit bigger and finding a few more of the best pubs in Bristol to list as happy customers and friends.”

In July, Bath Ales of Warmley was purchased by Cornish brewer and pub company St Austell for an undisclosed sum. The deal included the brewery, its portfolio of beer brands, pubs, Graze restaurants and Beerd bars.

Bath Ales head of marketing Karin Ashwell said that “people in Bristol tend to be discerning when it comes to their food and drink. That means delivering fulsome flavour with sustainable ingredients and practices and that has always been at the heart of what we do – so drinkers from the slightly curious to confirmed beer geeks should continue to find plenty of good cheer.

“With our Beerd brews we tend to experiment a bit more. For 2017 we have identified four core beers which will be permanently available. The Beerd team have also mapped out a schedule of new beers in keg, in cask and other seasonals for people to enjoy.”

Read more: ‘Craft beer can be a great career in Bristol’