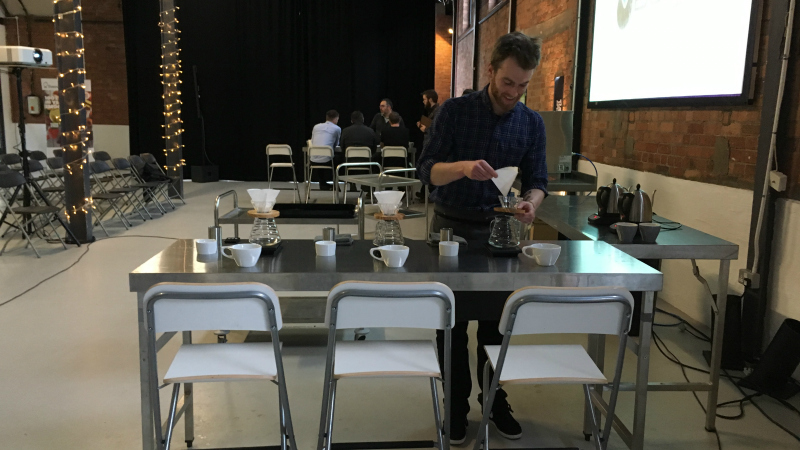 Coffee was overflowing at the Paintworks for Bristol’s Barista Battle Royale.

The regional heats for the UK Barista Championships saw more than a dozen competitors whittled down to the South West regional champion, who now hopes to be representing the UK at this year’s World Championships in South Korea.

The steel columns supporting the Paintworks Events Space had been spruced up with fairy lights, illuminating the bare walls of exposed brick.

There were cameras, screens and plenty of coffee aficionados scattered around the room, all adding to the understated glamour of this caffeine-fuelled frenzy.

It felt more like an edgy warehouse bar rather than a competition, DJs pumping out chilled tunes, easing the mood.

The Brewer’s Cup happening on Wednesday, sponsored by Beyond The Bean, was a shorter affair than Tuesday’s Barista Championships, which is a painstaking process of preparation backstage for an hour before having to present to multiple judges.

“Speciality coffee is gaining in popularity all the time as the coffee industry evolves and we’re much more interested in the provenance of our coffee now,” said the three-time UK champion, Maxwell Colonna-Dashwood of Colonna & Small’s in Bath.

For people working in the industry, coffee is not just the liquid gold that most people use to get themselves geed up for the day ahead, it’s their passion and their trade.

Each participant in the Brewer’s Cup must make three cups of coffee, using coffee provided by the event’s sponsor (this year, Origin from Cornwall); water provided by BWT and a grinder provided by the Speciality Coffee Association which runs the event, and this is blind tasted by the judges.

This first challenge shows the barista’s raw talent for making coffee with ingredients and appliances they have never used before.

The second challenge is the open service, in which each brewer presents a coffee of their choice, prepares it with their own method and explains it all to the judges. They have five minutes to set up, ten minutes to do their routine and five minutes to clear down.

As I watched, David Cullen set up his three vials of coffee. In essence they are conical flasks with filter paper in them, like some sort of chemistry experiment.

He introduces his Ethiopian brew, then pours water of precisely 95-degrees over the grounds three times in order to extract all the different flavours from the bean.

Once it has finally brewed, the judges dipped teaspoons into the liquid and violently sip the coffee into their mouths. The action is so swift and the suction so strong it makes a sound like somebody blowing their nose. This allows the coffee to not only hit the taste-buds but each different area of the palate.

So much preparation and thought goes into each cup made here at the championships. Next time you order your usual coffee, just spend a little bit of time to appreciate your barista’s talent.