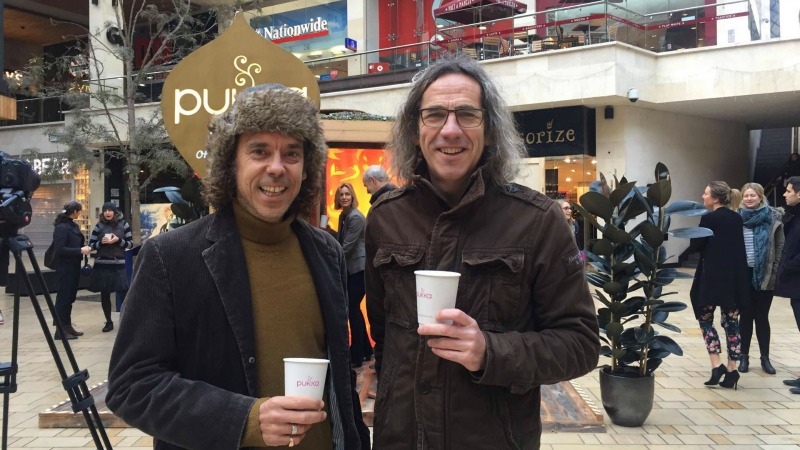 It was Bristol’s green spaces and love for the natural world that inspired Tim Westwell to place a classified ad in Venue magazine: ‘Business Organics. If you’ve got a business idea and you want to grow it in a healthy, wealthy, sustainable way, give me a call’.

After being in print for two weeks, Seb Pole was the only person who had responded. It would mark the start of the hugely successful herbal tea company, Pukka Herbs.

15 years on, and Tim and Seb are reminiscing about their company’s humble beginnings.

“Before that I’d just been working in corporate life and got really bored of it,” says Tim, sipping a turmeric tea at a Pukka Herbs pop-up shop in Cabot Circus.

“So I kind of reexamined my life and took some time out for three or four months, went walking around Ashton Court, just read a few books about purposefulness and connecting to the heart.”

Having always been passionate about sustainability and the environment, Tim’s organic approach to business appealed to Seb, who had already set up an organic garden in Somerset while studying to be a trained medical herbalist.

Seb began by making teas in his kitchen, while Tim was running the business in his spare bedroom. Today, the company employs almost 100 people at their headquarters in Hengrove and sells millions of cups of tea across 40 countries.

As he tries to keep warm in his winter hat, Seb expresses his gratitude to the Bristol community, the many generous people who helped them in their journey, and fellow Bristol businesses like Wild Oats in Redland and the Essential Trading cooperative.

Tim shares his passion for the city,

“Bristol’s a really cool place to be” he says,

“the Soil Association is here, there’s lots of cool small businesses that are trying to create more and more awareness.

I moved here in the late 80s and it’s changed incredibly. We’re all waking up to a bit more consciousness, so we’re on a mission to create a more conscious world by connecting people to the power of plants.”

But despite this positive energy, Seb still believes that Bristol could be doing more to campaign for a more sustainable, organic world.