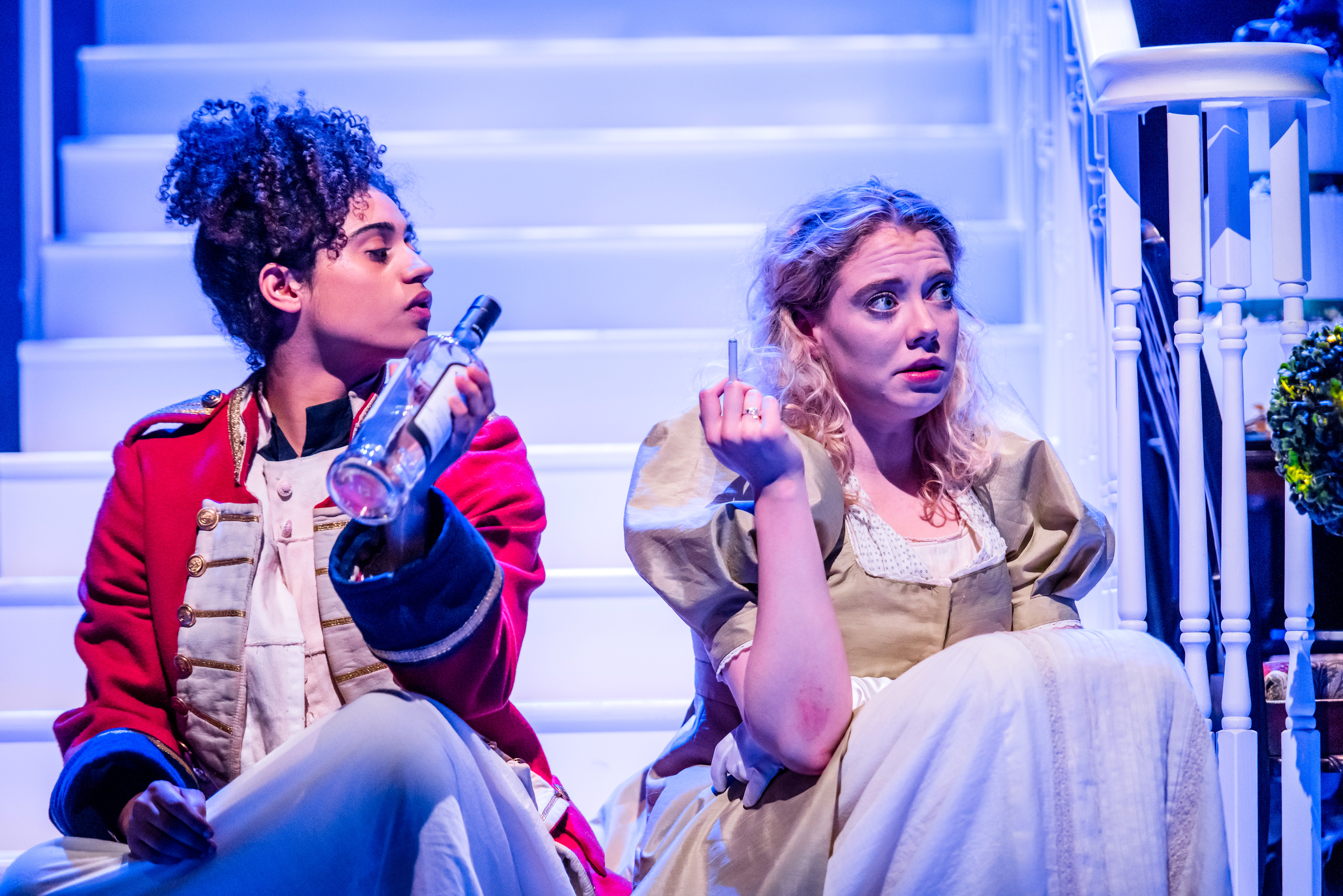 It’s fortunate that Blood of the Young’s Pride and Prejudice*(*Sort Of) is being staged at Bristol Old Vic and not Bath’s Theatre Royal, since this production would probably lead to mass apoplexy amongst Jane Austen purists in the Georgian City.

Although the show cleaves closely to the plot of Austen’s prototypical romcom, the style and delivery are a very long way from the comforting, starched formality of a BBC period drama. There’s singing and there’s swearing, and the whole thing is infused with a very 21st-century-sitcom sensibility. If Austen’s ghost was commissioned to write a series of Miranda, this is what the end product would look like. It’s modern, it’s very funny, and yet it’s still completely true to the much-loved classic. 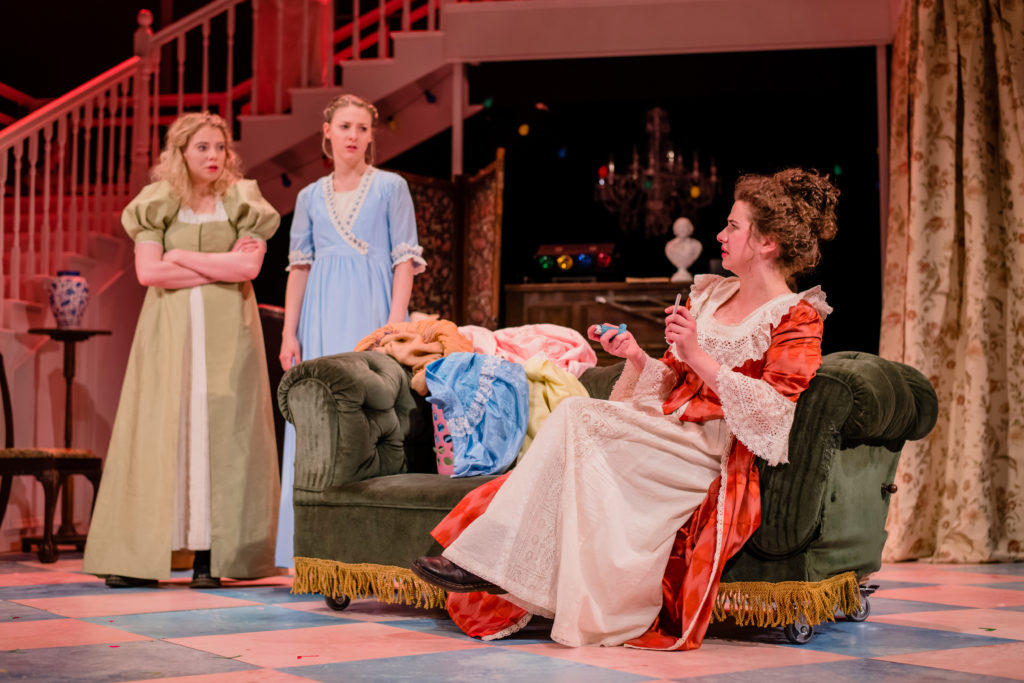 With a nod to the plays staged by Shakespeare’s Mechanicals, the female servants who flitter almost unseen through the pages of Austen’s work decide to stage the story of Pride and Prejudice for our delectation. A cast of six women with a cross-section of regional accents therefore present all the characters, from Meghan Tyler’s acerbic, wisecracking Elizabeth Bennett through to Hannah Jarrett-Scott’s nice-but-dim toff Mr Bingley. 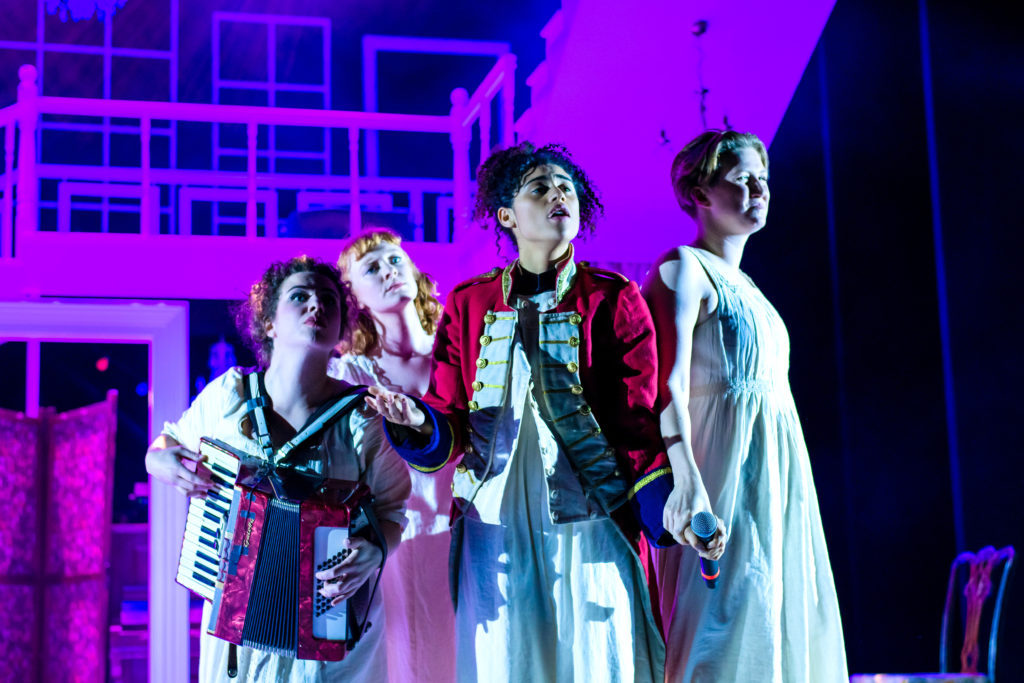 Writer Isobel McArthur has bagged the two plum parts for herself, giving both a delectably hysterical Mrs Bennett and a Mr Darcy so buttoned up he sometimes almost struggles to walk. But it is not McArthur’s acting talent that makes this show. It is her script, which concertinas all of Austen’s plot into a pacy and utterly contemporary narrative whilst still retaining all the essence of the source material.

The humour in the lines is complemented by a fantastic array of comic skills right across the cast – a tour de force in which every pause, expression and small gesture adds another touch of perfectly attuned comedy. But it’s certainly not all slapstick. There is depth to Austen’s characters, and one of the highlights of the show is Jarrett-Scott’s brilliant presentation of Charlotte Bingley (yes, she does play both Bingleys), making the character both totally ridiculous and yet tenderly touching. 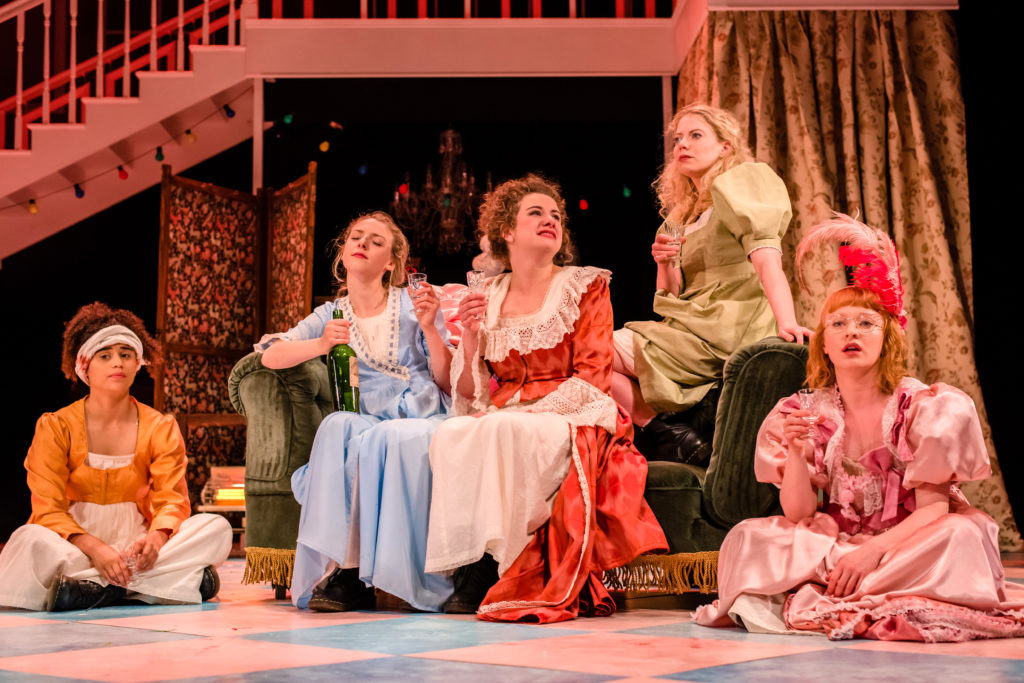 MacArthur and director Paul Brotherston have drawn on a wide range of inspiration for their staging, from modern sitcom through to Glasgow music hall. With a non-stop flow of gags, pop classics and moments of complete insanity, the end result is a fast-paced delight which makes Austen completely accessible to those who instinctively shy away from ‘old books’ and is – quite simply – a total laughfest. The original author would undoubtedly approve.

Pride and Prejudice* (*Sort Of) continues at Bristol Old Vic until Saturday, Sept 28. For more info and to book tickets, visit bristololdvic.org.uk/whats-on/pride-and-prejudice-sort-of