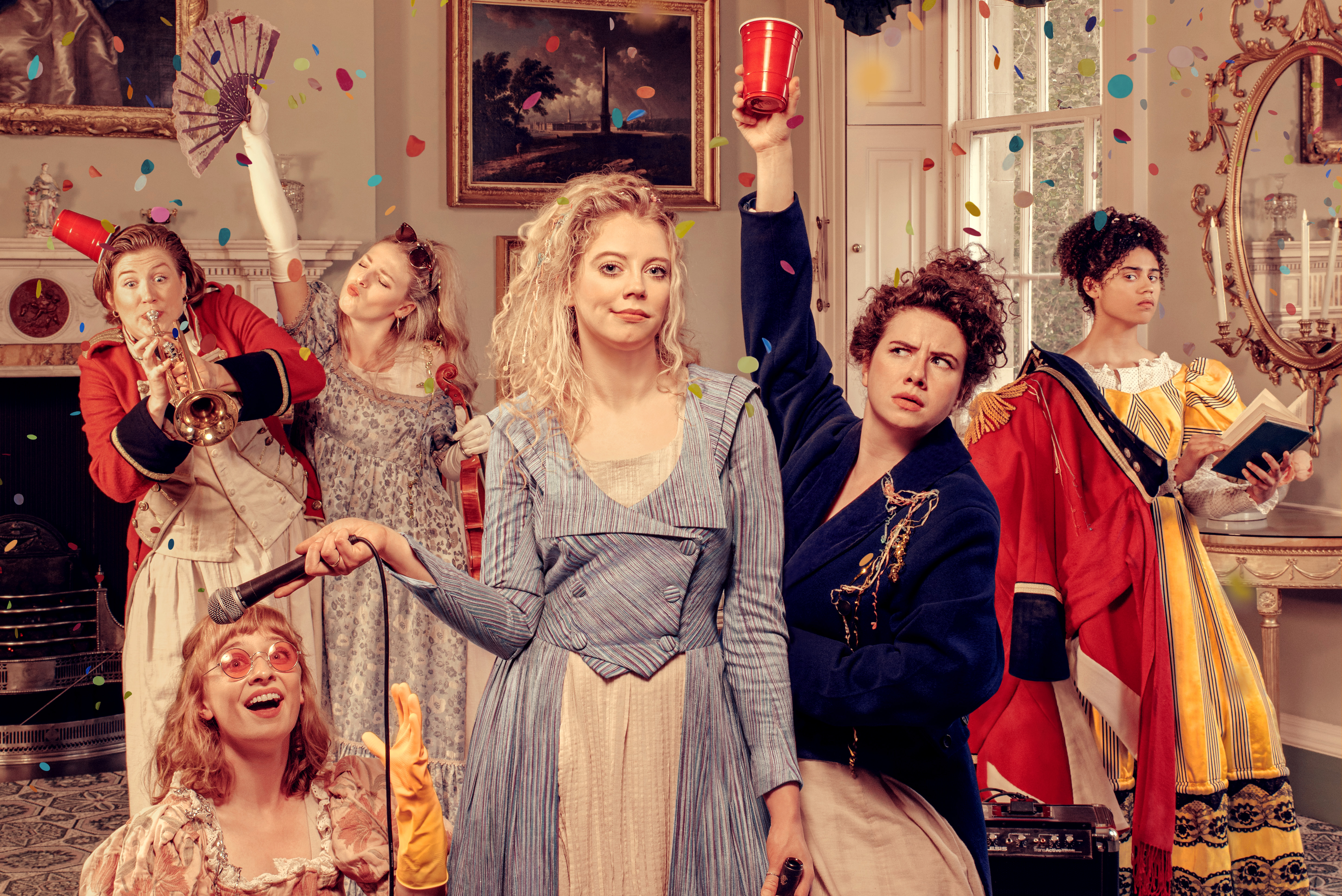 Glasgow theatre company Blood of the Young draw on over 200 years of romantic pop history in their take on Jane Austen’s much-loved novel Pride and Prejudice.

Six young women have a story to tell. You might have seen them, emptying the chamber pots and sweeping ash from the grate; the overlooked and the undervalued making sure those above stairs find their happy ending.

Now, for once, the servants get centre stage, and men, money and microphones are fought over in this loving and irreverent all-female adaptation of Jane Austen’s unrivalled literary classic.

Isobel McArthur adapted the novel, and also stars in the production. “Jane Austen tells a fantastic love story in her original novel – so this adaptation is hugely affectionate towards, and therefore pretty faithful to that,” she explains. 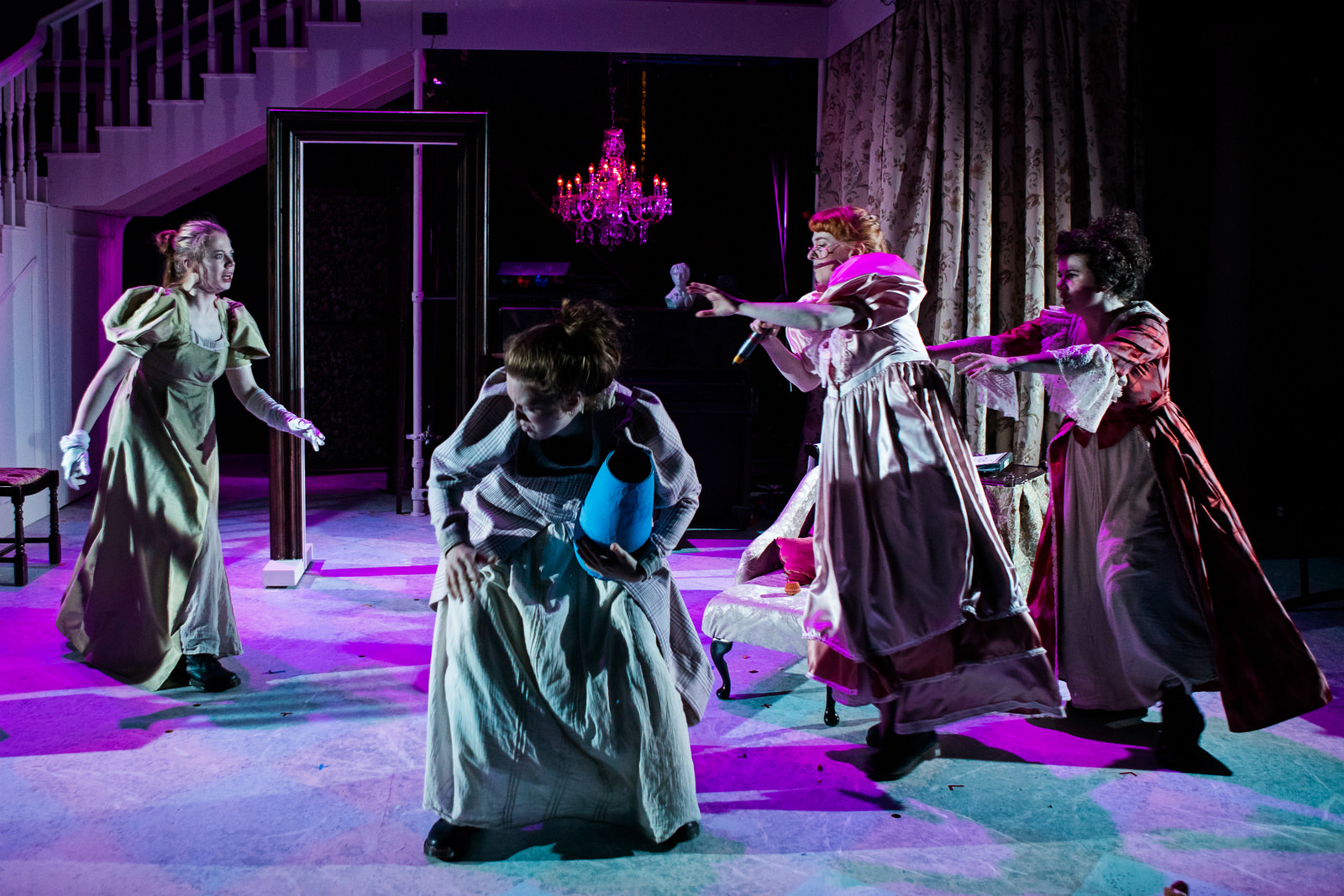 “Any reinterpretations are either to exploit the inherent theatricality of the narrative, or to playfully subvert expectations. By doing this, we can surprise and delight audiences who have a familiarity with the story – but also those who might have perceived notions of Austen’s work as otherwise dominated by plummy bores conversing in drawing rooms. The fact is that Jane Austen is straight-up hilarious and the image of her work imposed by many film adaptations or lessons taught in schools may have damaged her reputation.”

The show mixes straight dialogue with other media including – because, why not? – karaoke. “There is a playful narrative voice shared by the six servants who tell the whole story, with the majority of the plot delivered through dialogue,” Isobel explains. “Austen has created such wonderful, funny characters that you’d be stupid not to try and give voice to as many of them as possible. 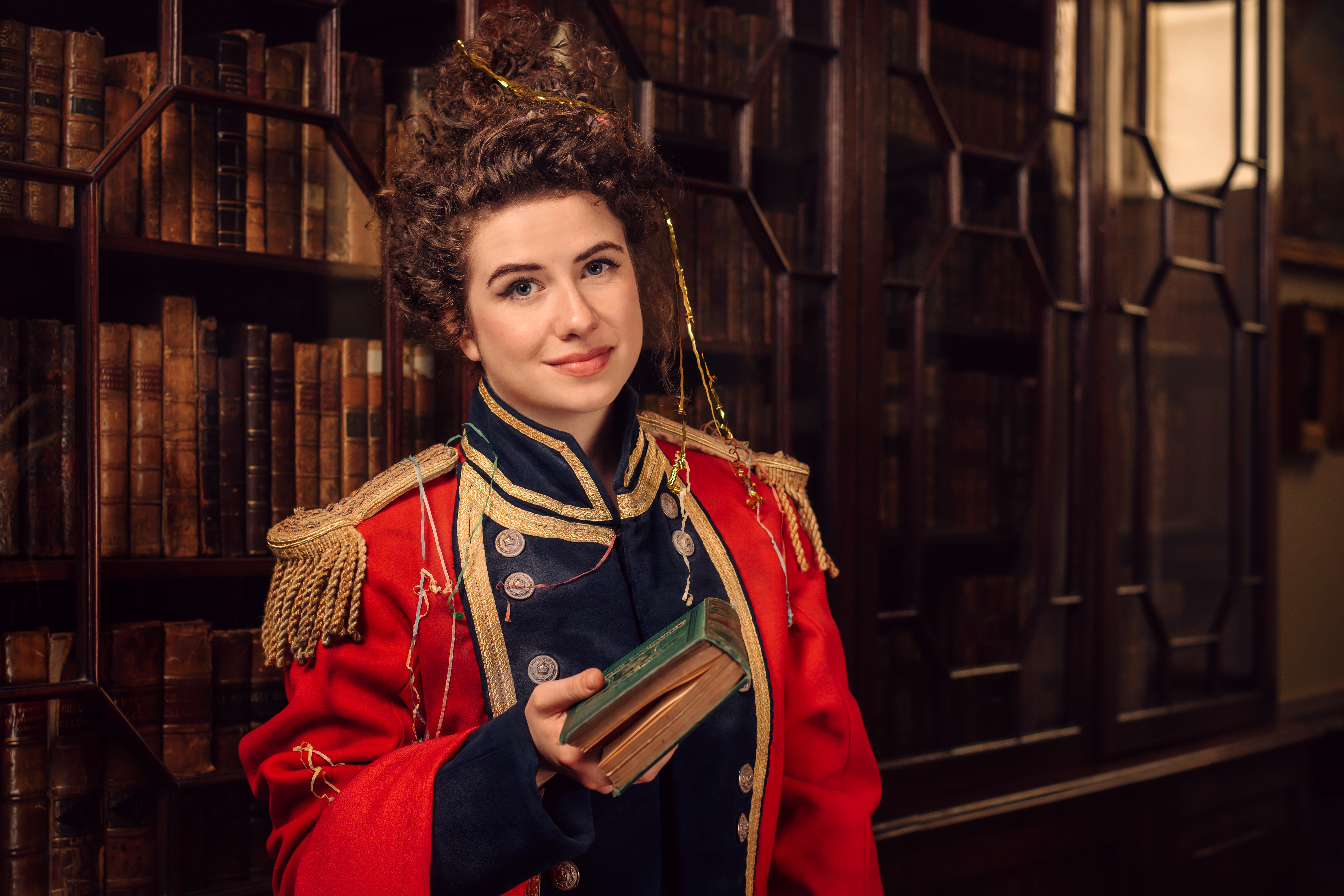 Writer Isobel McArthur, who also performs in the adaptation

“We cover all the key relationships in the novel with just six performers, and watching them rapidly hat-swap throughout is a big part of what is so enjoyable for audiences. Woven through the whole thing is a cracking playlist of karaoke love songs, with the spirit of a party framing the entire show.”

Isobel’s retelling draws on over 200 years of romantic pop history. “A good love story is just irresistible – and we wanted to celebrate romance for its own sake by drawing on many of the traditional features of romantic comedies: sweeping scores, pathetic fallacy, sighs, swoons, and just all that thrilling electricity of new love.

“However, importantly, we also dig into the essential questions that the novel asks about enduring love  – is ‘the one’ someone who is perfect in every way, or actually the person who best understands the meaning of love as you do? Can you love someone else, flaws and all, before you’ve honestly acknowledged your own shortcomings? Why do many of us assume that having a partner is such an important part of living a life fulfilled?” 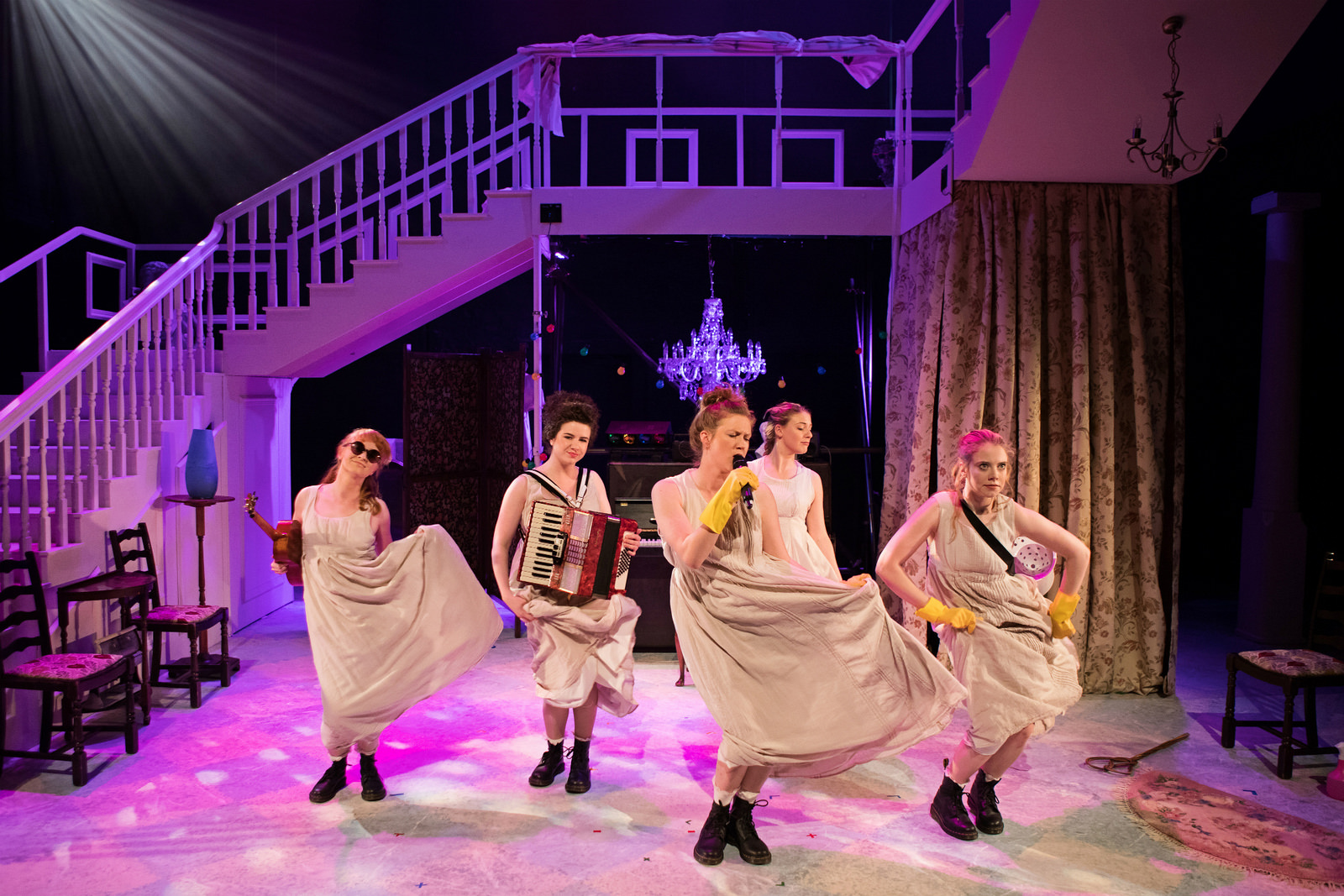 And the rationale behind the all-female cast? “I don’t think anyone on Planet Earth needs me to explain why we need to hear more female voices and create more opportunities for female performers to play a wider range of nuanced, interesting and varied roles in the theatre.

“But, additionally, there are many artistic reasons why an all-female cast was so perfect for presenting this story. Pride and Prejudice is about the plight of five daughters and their mother. Their future hangs in the balance as a direct result of their gender. Without marrying, they will be destitute. Such is the lot of any woman without a man to legally represent her in Regency England.

“So – at its very heart, this was always a woman’s story. However, Pride & Prejudice is also set during the Napoleonic Wars (something rarely touched on in most adaptations), meaning a disproportionate amount of household servants were women at the time. Indeed, fines were imposed for hiring male servants who might otherwise be usefully employed as soldiers. 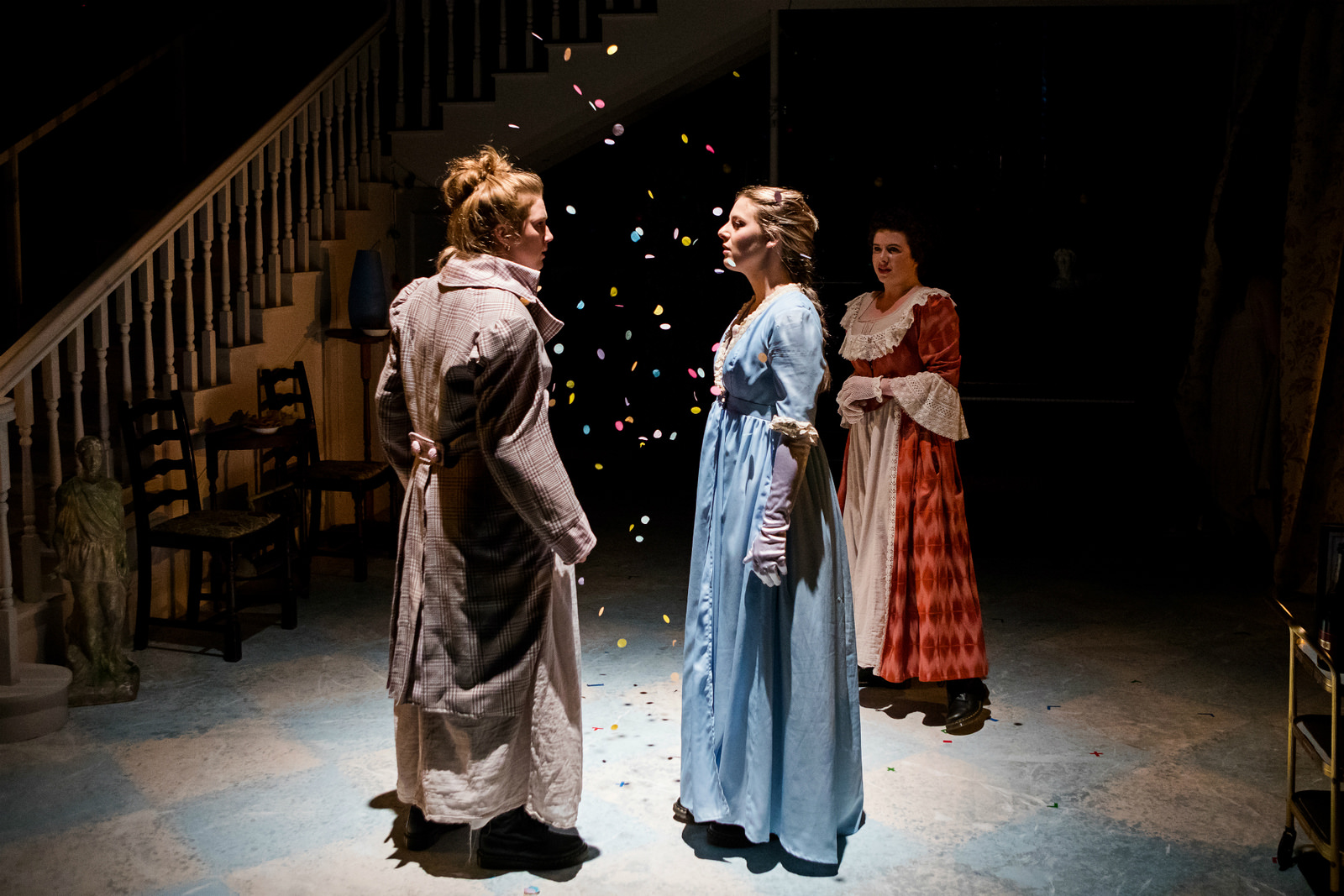 “So, while I knew it was crucial that a story so tied up in class and status (and given a lofty amount of cultural capital in the public consciousness) needed to be told by the servants – it was then especially wonderful to be able to have them also be women and therefore embody the roles of all their employers, including the men, in an act of doubly-transgressive triumph.

“Other reasons? Jane Austen was unable to publish under her own name during her lifetime because she was a woman. Elizabeth Bennet is the novel’s main character – but everyone goes on about Colin Firth. Ach, these things speak for themselves…”

But does Pride and Prejudice deserve the place it has in popular culture – something of a set text, very well-known and much loved, but also perhaps fondly made fun of sometimes, as a portrait of an overly well-mannered time and place? “It is not necessarily an easy read,” Isobel acknowledges. “I have a degree in literature, and some of those sentences were unwieldy for me. So, giving it to 15-year-olds en masse and putting pressure on them to all find it immediately accessible and entertaining is surely unfair. 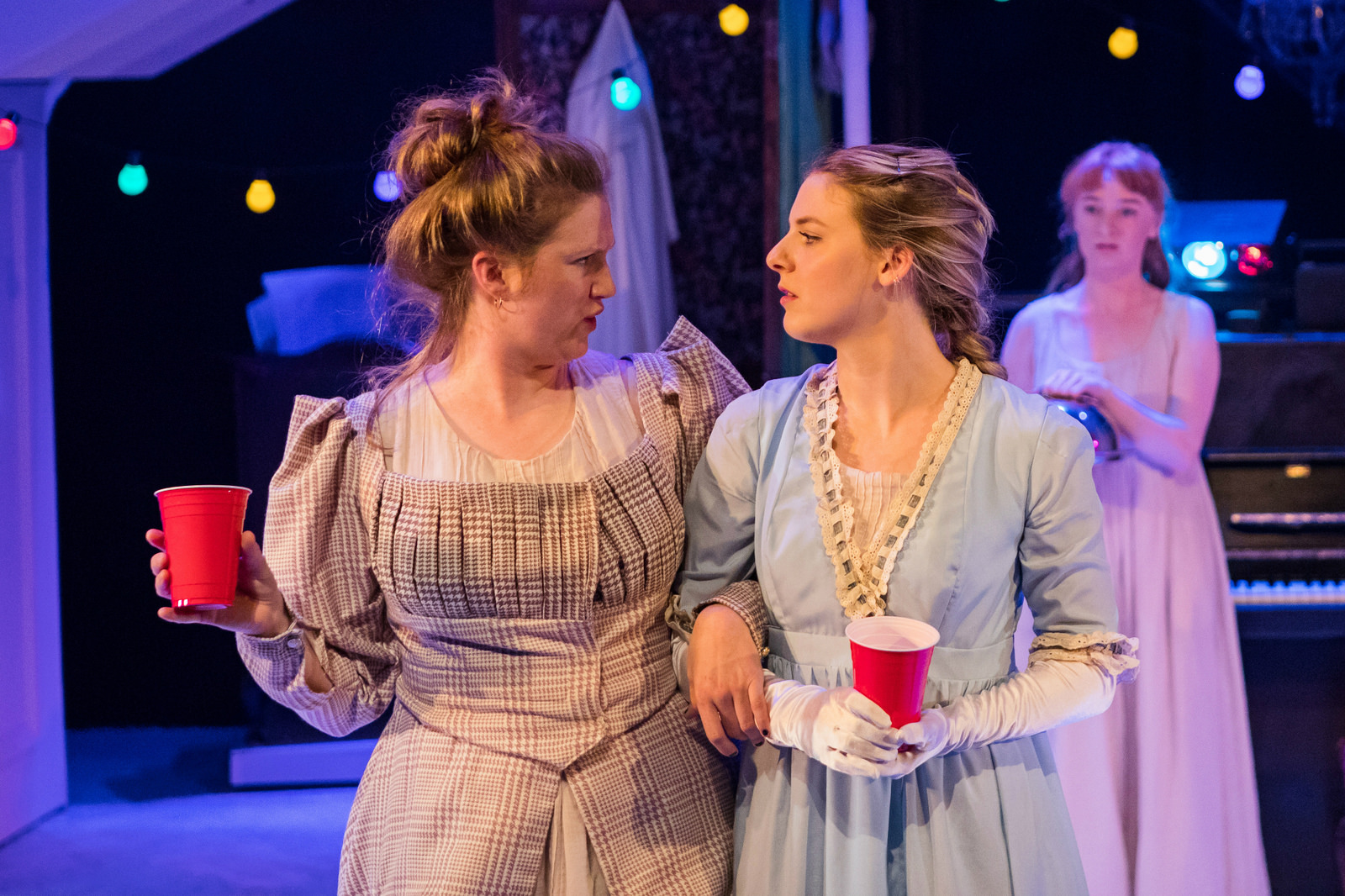 “If you’re young and excited by life (or indeed any age and into, say, action movies) – why would something held in the public consciousness as fundamentally fusty and conservative appeal to you? I really sympathise. However, in reality, it’s a great, ever-relevant story full of hysterical, familiar-feeling characters. I do hope that, in seeing this theatre show, audiences who maybe haven’t previously can feel closer to Austen, and that they may seek out the book and give it a go.”

And as for the gentle fun poked at Jane Austen’s novels in sketch comedy and elsewhere? Something of a catch-22, says Isobel. “The complicated thing about making fun of Austen is that she was already making fun of the time she lived in, and the ridiculous characters who populated her world with such incisive wit that she’s almost impossible to beat. She found the whole business of manners, class, gender – and both adherence to and diversion from societal norms – as fascinating and so fundamentally revealing about human beings that she mined that stuff endlessly.

“She was just… clever. Much cleverer than a lot of us think we are.”

Pride and Prejudice* (*sort of) is at Bristol Old Vic from Sept 7-28. For more info, visit bristololdvic.org.uk/whats-on/pride-and-prejudice-sort-of