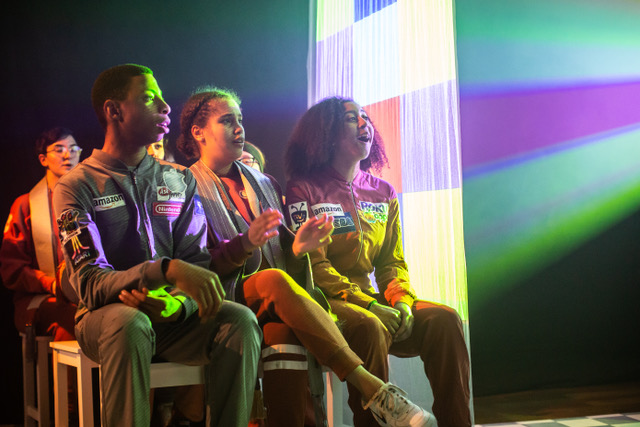 Pictured above: Wow! Everything is Amazing by Sounds Like Chaos, one of the ten brand new shows by emerging companies visiting Bristol from June 26-30

From June 26-30, Incoming Festival visits Bristol for the first time in its six-year history. Programmed by A Younger Theatre and London’s New Diorama Theatre, Incoming features a programme of exciting work from some of the most outstanding emerging theatre companies, presented simultaneously at Tobacco Factory Theatres in Bristol, HOME in Manchester and New Diorama in London.

Each night in the Tobacco Factory’s Spielman Theatre, Incoming will present a different double-bill of fresh new work, with all tickets at only £5 per show.

Tell us all about Incoming. How, when and why did it come into being?
Incoming Festival came out of a desire to do something to support and nurture emerging theatre makers.

I used to edit a publication called A Younger Theatre, which mentors and publishes young writers. We reviewed a lot of work that the mainstream press couldn’t, and although I believe that this kind of peer critique is genuinely important and useful, we wanted to do more. Jake Orr [AYT founder] and I batted around various ideas, and kept coming back to the idea of some kind of festival.

One evening at the Edinburgh Fringe, we were talking to the wonderful David Byrne, artistic and executive director at the New Diorama Theatre in London, and he basically told us to stop talking and start doing: he asked us what we’d do if he gifted us New Diorama for a week, and got us to come up with a proper proposal. Incoming Festival was born, and we ran the first week-long festival in 2013. Jake and I programme it with David, and we’re now about to launch the sixth festival. Last year,  we went to HOME in Manchester for the first time, and this year we’re thrilled to be bringing it to Bristol, too, at the wonderful Tobacco Factory Theatres. 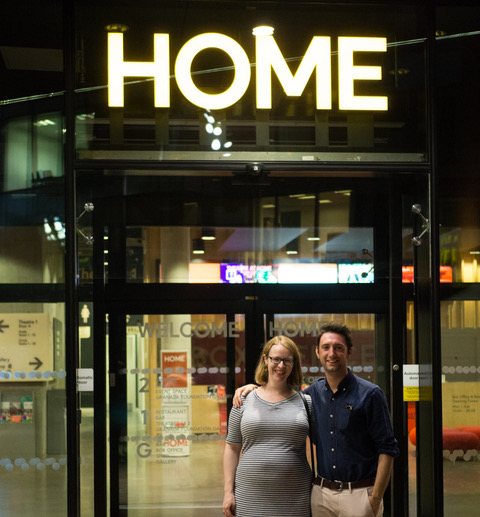 What have you set out to do with the festival?
Incoming is designed to showcase and celebrate the best emerging theatre companies across the UK and beyond.

We don’t have a set definition of “emerging” – if a company feels that’s a useful label to apply to their work, we will consider it. For the companies, Incoming is a launchpad: a chance to share their work with new audiences, and to start a relationship with new venues and programmers. Several companies have gone on to be programmed for longer runs at both New Diorama and HOME.

For audiences, it’s a chance to see some of the most exciting, innovative, challenging, hilarious, moving and interesting new work being made by emerging artists, for a fiver. All of our tickets for every show cost just £5, allowing the festival to be accessible to everyone, and allowing people to take a risk on a company they probably haven’t heard of before.

How is the UK’s emerging theatre landscape? Is there lots of talent bubbling up?
There is so much talent among emerging theatre makers at the moment. Every year, we start looking for work for the following year’s festival, and every year we are delighted by the talent we come across. That said, there are some serious issues across the emerging theatre landscape, which cannot be ignored. The biggest one, as for everyone working in theatre, is money: there simply isn’t enough to go round. So much of the arts relies on exploitation and self-exploitation. 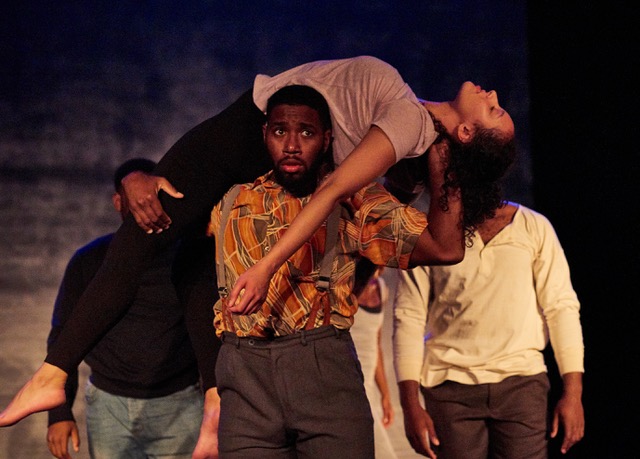 ‘Freeman’, by Strictly Arts Theatre Company (“a revelation (…) stunning physical theatre” – The Guardian) is one of the ten brand new works by emerging companies visiting Bristol with Incoming Festival

Lots of big organisations and venues have artist-development schemes, but very few offer long-term support of the kind that means theatre companies can keep making work. Incoming Festival offers the best fringe festival deal in the country, with a flat fee and 50% of box office takings for each company. No one is getting rich here (least of all us as directors!) but it is hopefully a real opportunity and not something that ends up costing companies money.

We programme a lot of work from the Edinburgh Fringe and, again, we’re very aware that not everyone can afford to take a show to Edinburgh, because it’s so expensive. Without savings, parental support or not paying people, it’s basically impossible to take a show to Edinburgh, and that’s a massive problem for the diversity of the sector. But it’s also an amazing place to see new work, and for us to discover new companies. So it would be madness not to go, but we try to see as much as possible elsewhere, too.

So many talented companies make a show or two on a shoestring, or with small pots of money from different funders, but can’t ever progress beyond ’emerging’ into ‘established’, or find a way to keep making shows. New Diorama does incredible work to support emerging artists (seriously, check out their artist development programme – it’s amazing!) and plenty of other big venues do good work, but money is always tight and this kind of work isn’t always a priority.

So, I’d say the state of health of the emerging sector is shaky. There are so many companies being formed and making work, but most of them can’t sustain themselves and never have a chance to develop their practice. 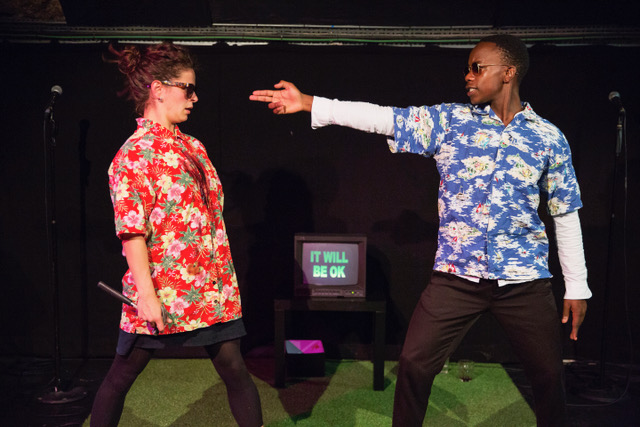 ‘No One Is Coming To Save You’ by This Noise. Pic: Murdo MacLeod

Does this talent have enough venues to play in, enough plugged-in audiences coming to it, or does the word need to get out there better?
This is a tricky question to answer! Incoming’s unofficial tagline is “the best companies you’ve never heard of”, so we’re not necessarily expecting audiences to be plugged-in yet. There’s definitely an audience for risky, experimental, exciting theatre, as we have found already in London and Manchester, and I’m confident that there’s an audience for it in Bristol, too, or we wouldn’t be bringing the festival here!

I think audiences are prepared to take a risk and see something new, but only if the price is right. That’s why we cap our prices, year on year, at just £5. For the cost of the pint, you can see some of the best emerging theatre in the country, which is a pretty good deal if you ask me!

Tobacco Factory Theatres have generously organised dinner and drinks deals, too, so if you buy tickets to both shows on one evening (there are two shows on every night, at 7pm and 8.30pm) you can get a special deal at the restaurant downstairs or The Yard, and 20 per cent off a drink at their bar. We’re hoping this will encourage people to make a night of it, to grab an early dinner, see both shows and enjoy a cheaper drink in between. 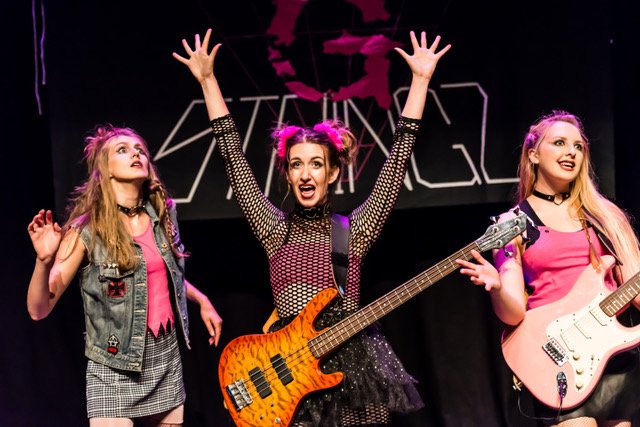 Venue-wise, lots of places offer emerging artists a platform, but it’s usually for a single show or a very short run. The problem, again, is how to help companies transition from short runs and small spaces to longer runs, tours and main-stage slots. Venues don’t have the marketing budget to risk offering an unknown company a long run, but without a long run companies have no chance to building up a following. It’s a real catch-22.

Are any theatrical styles and/or themes and concerns coming through particularly strongly among emerging theatre companies at the moment?
Incoming doesn’t have a set theme, besides showcasing emerging theatre companies, but every year we look across the programme and notice themes emerging. We had one dark year with lots of shows about cancer and death, a brilliant year full of glittery feminists, a ‘crisis of masculinity’ year, and last year was all about sex with robots. This year, the zeitgeist continues to tap into issues of alienation and technology; of young people trying to understand their place in a screwed world; of memory and loss.

Style-wise, we tend to find a lot of devised, rather than script-based work. A lot of interesting emerging companies work in quite a democratic way, with everyone building a show together, rather than starting with a script, getting a director on board, casting and then rehearsing.

Briefly introduce us to two or three shows you’re particularly excited to bring to Bristol.
I know I’m biased, but I really think this is the most exciting lineup yet, and the joy of the double-bill format every evening is that you can see a really eclectic mix of shows.

Wow! Everything Is Amazing has been made by a group of teenagers, and is a really thoughtful exploration of our reliance on technology. Nine Foot Nine is the best thing I saw in Edinburgh last year: a brilliant, sharp piece of sci-fi writing, imagining what would happen if women suddenly grew to be nine feet tall – what would that do to patriarchal power structures? It’s very, very clever. The Half Moon Shania is a piece of gig-theatre, bringing some girl-powered punk to the stage, and will be a really fun way to end the festival. I really hope that there’s something for everyone across the week.

Eleanor Turney is Co-Director of Incoming Festival, and a freelance editor, writer and artist consultant.