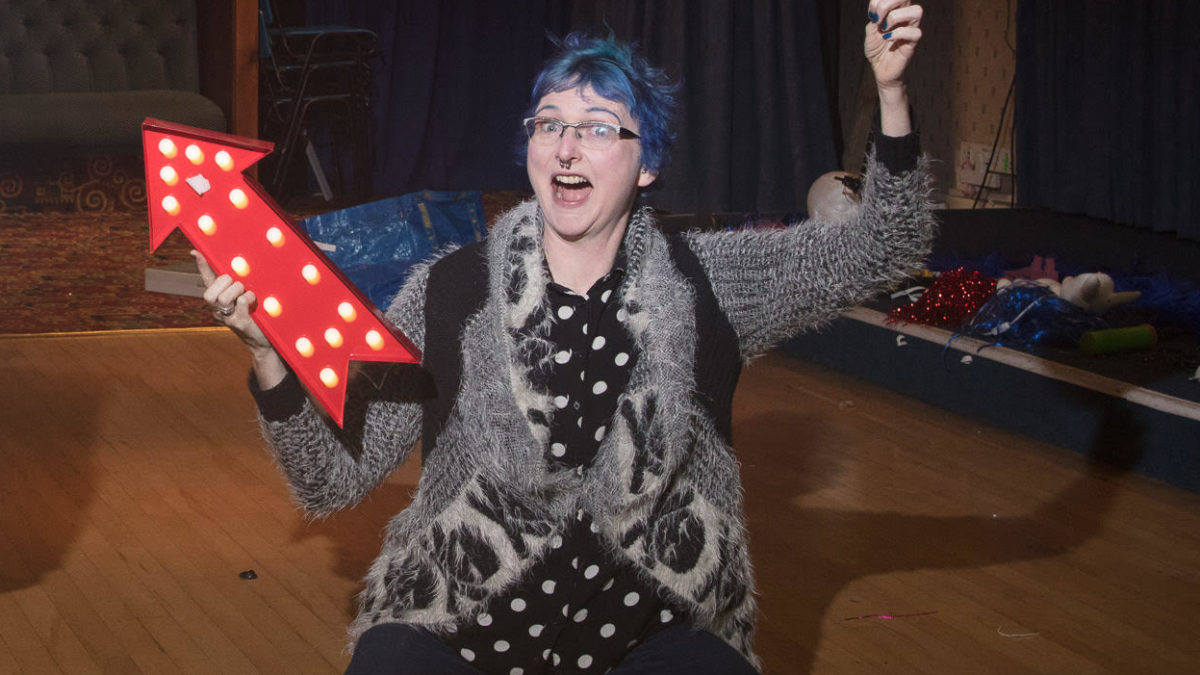 Promising a ‘fantastical journey to uncharted glittery lands’, Bristol performance artist Liz Clarke and her ten-year-old son Felix bring their inter-generational, improvisatory meditation on gender, I’m Bitter About Glitter, to the Wardrobe Theatre for its final performance on June 23.

The show began with a simple discussion between mother and son. “It started out as just a conversation between me and Felix, about family and about making different choices – and about gender expectations and gender in general,” she explains.

“Felix coined the phrase ‘I’m bitter about glitter’ because we were talking about how I leave a lot of my stuff and props around, and how that might be a bit different from what other boys experience. And Felix asked, ‘What if we did a show where I was Betty Bitter and you were Betty Glitter?’”

Inspired by this idea, mother and son embarked on the project together as equals. It was essential to Liz that Felix have as much creative input as her. “We wrote a statement of ethics around working with this kind of means and working with children in general. We had quite a blank slate apart from some of his very fixed ideas, so we did lots of improvisation. It was very much child-led, negotiating that balance of us in the room as artists of equal weight – and, for me, balancing that with the ultimate responsibility of being his mother.” 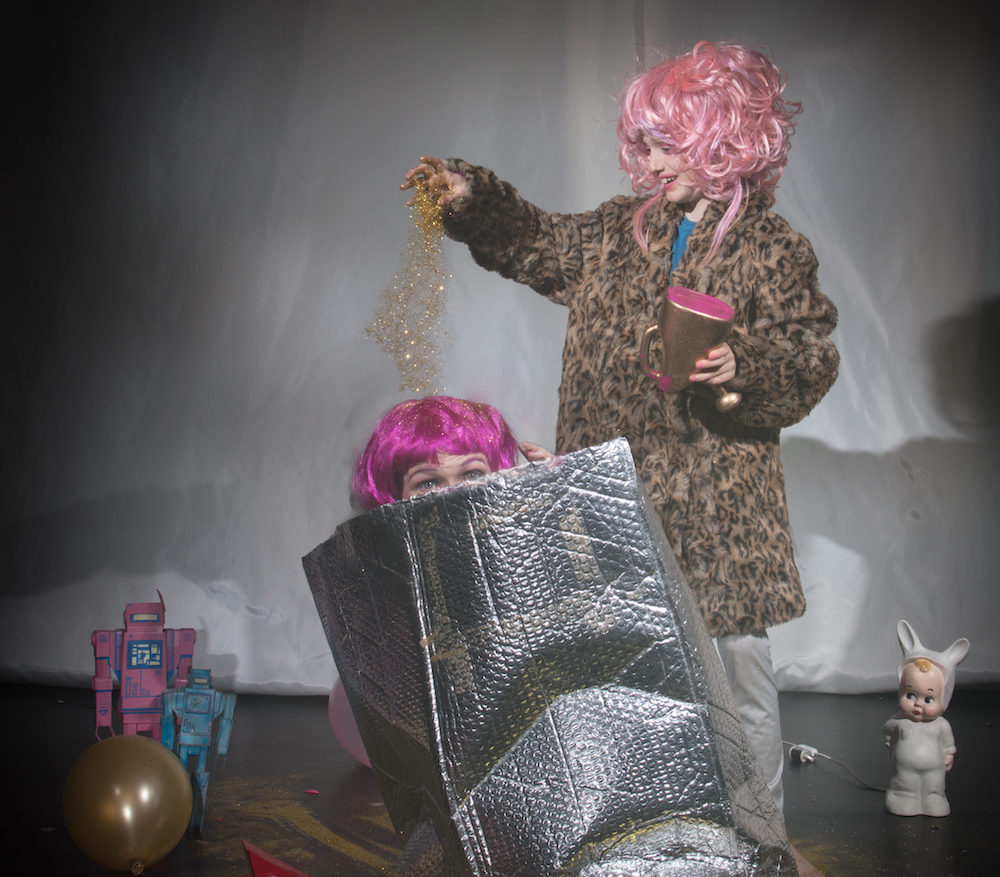 “We worked with director Lucy Cassidy, who really carefully helped the process and facilitated lots of play. The show is quite fast-paced – and quite a lot of it is improvised, because Felix doesn’t like rehearsals. He’s a brilliant improviser. He really puts me to shame! We let the play lead to places. It was really freeing for me and taught me something fundamental about the joy of making theatre.”

Surprisingly, this wasn’t the first time that Liz had explored the mother/child relationship on stage. A few years ago, I Tattooed My Baby starred Liz and her nine-month year old daughter, using their relationship to explore motherhood.

“It was about the voice of a mother, and how we inevitably ‘tattoo’ our children with our own views and blueprints for life. In that piece my daughter was present with me throughout on stage and in the show I responded to her needs. I fed her if she needed feeding and played with her – it was very responsive.”

“A lot of my work is in the personal and political realms. Gender norms can be so insidious: even before you give birth to a child you’re thinking about sticking a bow on a baby’s head so they know it’s a girl. I’m all for the joyful expression of gender and identity however that might be, and about not wanting to pigeonhole either myself or my son.”

A year ago from today, Liz and Felix debuted I’m Bitter About Glitter as a short ten-minute piece at the Watershed, and from there were commissioned by Camden People’s Theatre and Come As You Are Festival, who were looking for work that challenged gender binaries. 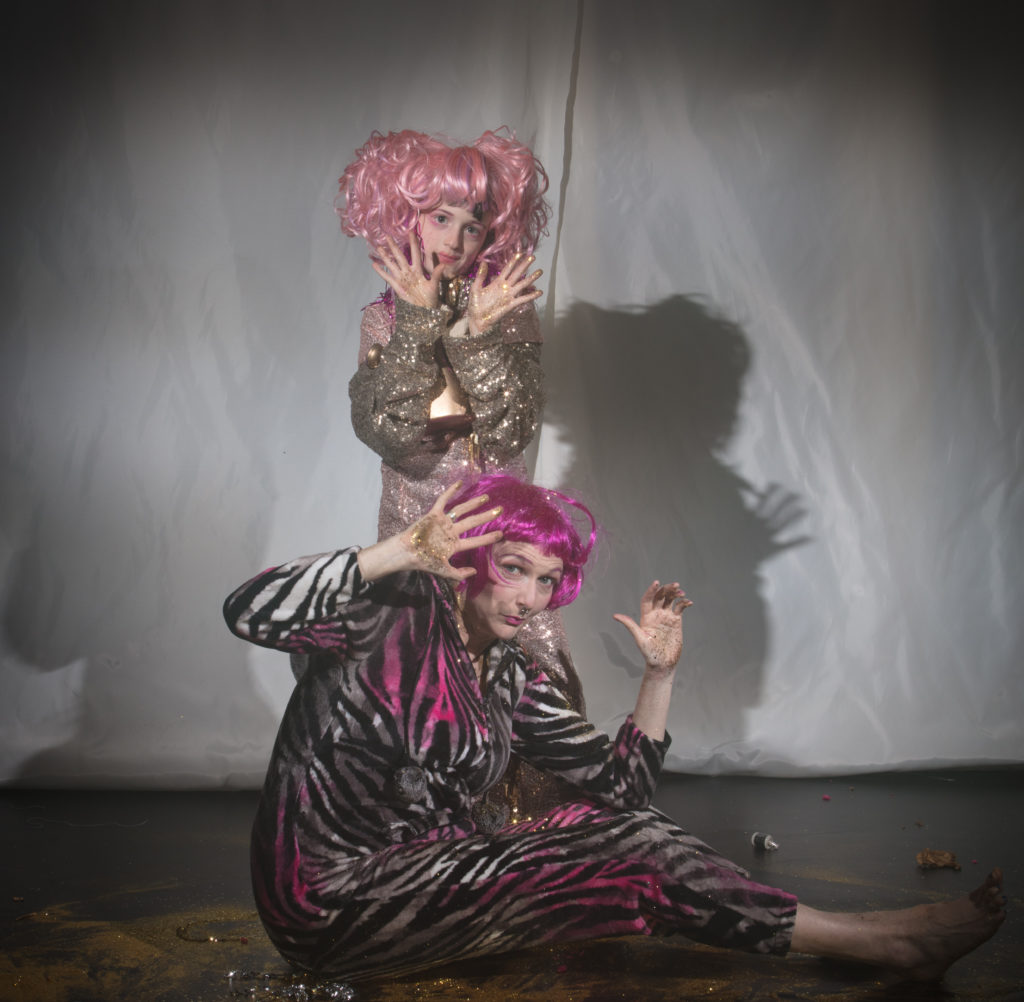 “Felix had some really flamboyant, out-there ideas that came back to people like David Bowie and [1980s performance artist and fashion designer] Leigh Bowery. He was absolutely inspired and started drawing these extravagant costumes that were quite space-age and unusual without being gendered.”

So what sorts of impacts does Liz hope the show might have? “I hope people might reflect on their own journey. There’s a hopeful message for the future, because the kids of Felix’s generation have got a lot more understanding and flexibility around gender. It was really important for us to make this a show that children and adults could enjoy together. People reflected back that it really reminded them of their younger selves, and wished they’d had something like this to tell them that they were accepted when they were younger.”

There’s been real-life evidence of the younger generation’s tolerance and open-mindedness, as many of Felix’s friends have come along to support him on stage during the show’s tour. And there are even upcoming workshops for families inspired by the show’s themes, as well as an accompanying documentary.

“The documentary is a capturing of the moments of the show that are really important, alongside interviews with me and Felix behind the scenes. The idea is then to tour the film and workshop package to family festivals and LGBTQI festivals, and all sorts of platforms. They’ll be appropriate and playful in a really safe way, and will have sparky content rather than just bland preachy theatre.”

“On the one hand I’m not an educator, I’m an artist, but the reason why we have these workshops is to facilitate these kinds of conversations for young people and for their families. It’s so important to make work with children and for children that celebrates all of our identities. I’d love to work with schools to bring a version of this to them. Hopefully in the future, that might happen!”

For now, Liz and Felix are looking forward to the show’s last hurrah, and the first of the workshops that will take place immediately afterwards.

“This final performance is to go out with a glittery bang. It’s really grown into the show that it is, and Felix himself has grown a year older during the process. He would go on doing it forever if he could, because he loves it. It was my decision to bring a close to this phase of the work, so that he can know how he feels about it.”

“Before this he always wanted to see pictures of my shows, and a lot of the time he can’t come see them because they’re late in the night. He has been sort of surrounded by the ephemera of my work! He’s into all sorts of things – he does ballet actually, which is completely alien to me as such a classical form, but he loves it. Even though performance is part of his life, I think he would probably choose a different part. He’s interested in making music and all sorts.”

“I think our particular mother/son relationship is really important and really interesting, and that as much as anything is what you’ll see on stage – a mother and son navigating our relationship. Plus, if you like balloons and glitter, you’ll probably love the show.”

I’m Bitter About Glitter is at the Wardrobe Theatre on June 23, 12pm. For more info, visit thewardrobetheatre.com/livetheatre/im-bitter-about-glitter