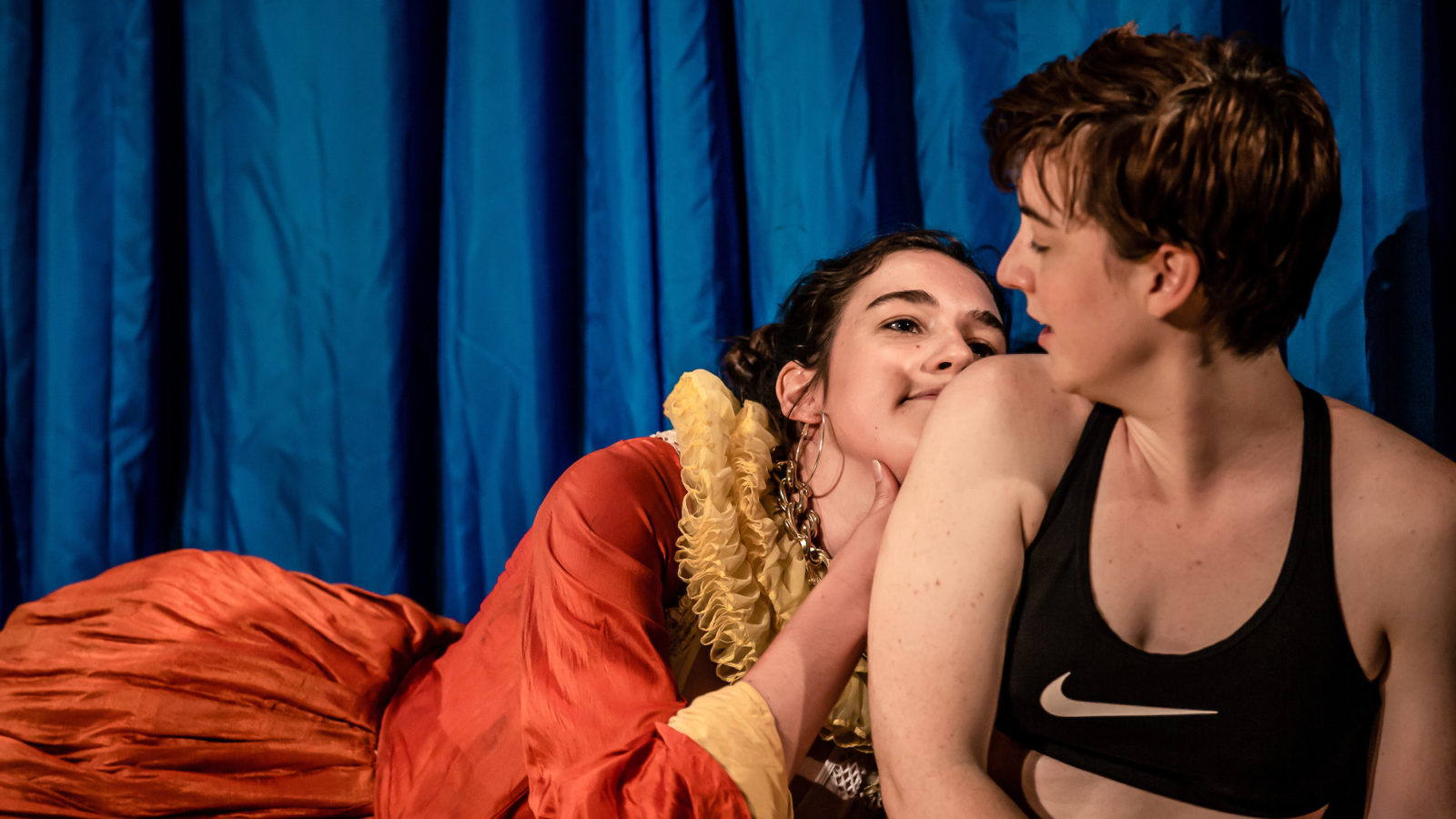 Nell and Oscar meet on a beach in Dorset. It’s 1595… or maybe 1610. Oscar has returned from university and Nell is doing f**k all.

They will meet here, again and again, on this beach for the next 400 years. Stuff will change. As it does with time. They will try to keep up.

A kaleidoscopic exploration of cultural progress, Wild Swimming is an interrogation of gender and privilege and a wilfully ignorant history of English Literature from new Bristol company FullRogue.

Recipients of a Ronald Duncan Award and a Pleasance Regional Partnership Award, FullRogue return to Bristol Old Vic with Wild Swimming following its riotous scratch debut as part of Ferment Fortnight in January 2019 and subsequent run at the Edinburgh Fringe.

Tell us about the genesis of the show, Marek.
It all started when the director, Julia, came to me with a provocation. She’d had a conversation with a (male) friend of ours on a drunken night out, where he had confided in her that he thought he ‘would’ve done better’ as a Victorian. She decided that she wanted to make a show about a man and a woman that went back in time, and that showed the crisis in contemporary masculinity. 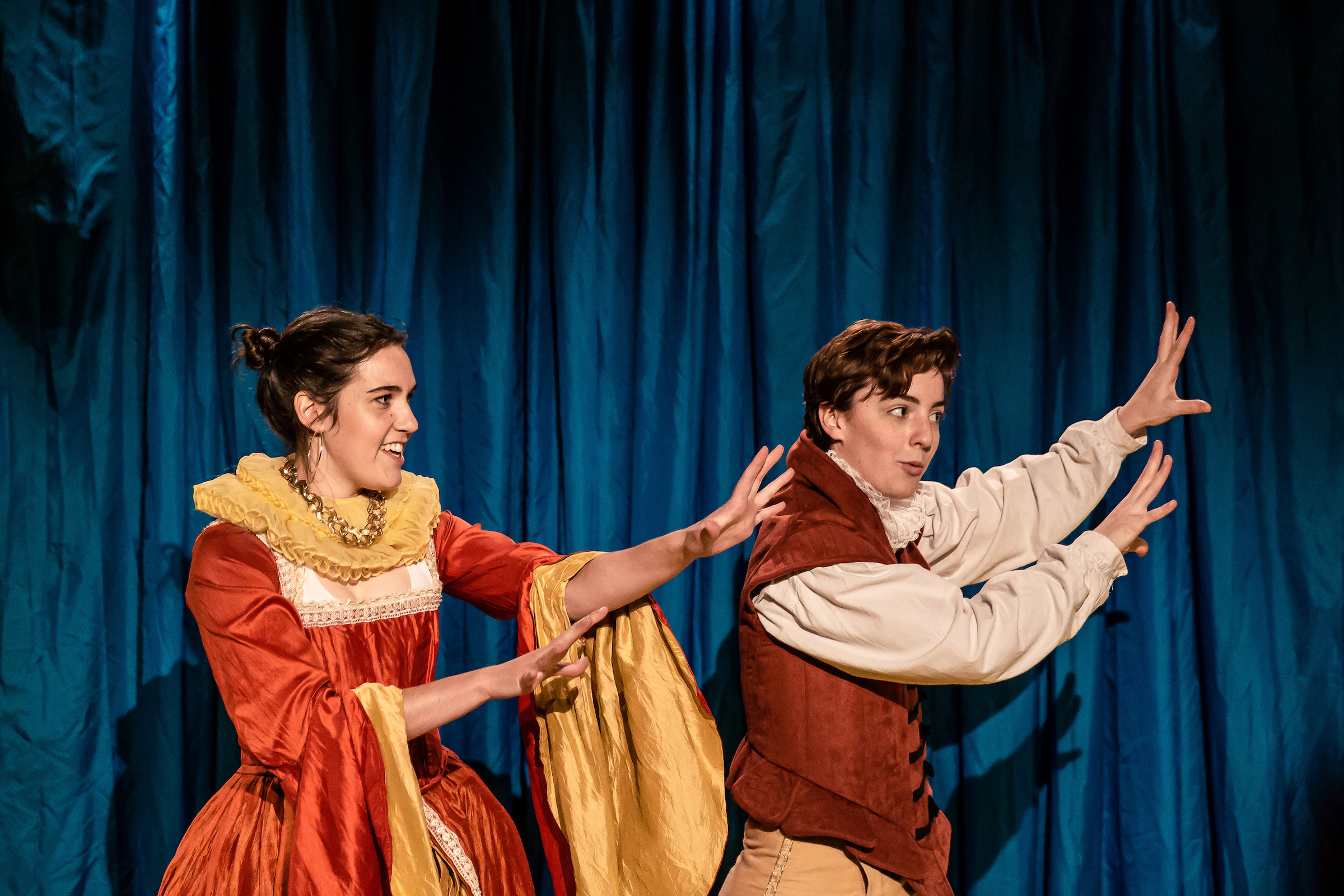 Alice Lamb and Annabel Baldwin in ‘Wild Swimming’ by FullRogue in association with The Pleasance and Bristol Old Vic Ferment. Pics: The Other Richard

I hated the idea. I didn’t understand why she was asking me to write it for her, and couldn’t think of a way in which I could really say anything new on the subject. It turns out that her secret motive all along was to get the most arrogant man she could find, make him write the show, and then destroy it live on stage. To a greater or lesser extent, she has achieved her goal.

Despite my hostility I kept talking to Jules about the show. I liked the formal idea of a play that moved along a longer-than-natural time frame. I also liked Julia. I liked her energy and her courage and I wanted to work with her. I offered to help her refine her ideas about the show, just as a mate, so we kept having coffee and cooking each other dinner.

The further we got into conversations about how it could be done, and how the formal frame could help shape the action, and how the play – as written by a white, cis-male – would, in order to have any validity whatsoever, have to (sort of) ‘eat itself’, the more interested I became.

Eventually we ended up in the absolutely glorious space of the Rehearsal Room at Bristol Old Vic, with a full complement of fabulous costumes from throughout the ages, and some really brilliant actors. I was secretly impressed that she’d managed to achieve all this, and I was enjoying the full array of snacks and the joyful camaraderie of people playing dress-up. And then something happened.

An actor, called James, suddenly went and changed into a Victorian bathing costume. He looked ridiculous, and incredible, and I could see the exact outline of his scrotum. I didn’t know quite why, but I realized that the play needed to be set on a beach. When I said this to Julia she hated it, like… really hated it. She was completely resistant but recognized it was something I had to try. She let me go away and write a first draft. I finally felt like I had some ownership over what we were doing, and from there we were on our way.

Do Oscar and Nell recur as the same age throughout – so, for example, we see how different life is for a 20-year-old in 1610, than in 2019?
So there are two time-frames running parallel to each other. We witness roughly three to five years in Nell and Oscar’s relationship, from Oscar starting university (Nell is prohibited from doing the same), through to graduation, and then their first forays into adulthood. The play’s central trick is that it also takes the characters through roughly 400 years of what you might call ‘cultural time’, from the renaissance to present day.

The dramatic tension of the play comes from the ways in which the changing cultural context alters the life chances for the two characters, and the knotty implications this has for how Nell and Oscar see themselves. The play is really about them trying to work this all out.  They (mostly) do this with love, and charm and grace, so the experience of watching it should be (hopefully) pretty affirming.

How does the play signal (via costume, language, changing social morals) the progress through time from one encounter to the next?
This is where the swimming comes in! I remembered reading a brilliant book called Swell by Jenny Landreth – which is both a personal memoir of a life in the water, and a feminist history of swimming. Landreth makes the point that swimming, for women, can be an especially liberating experience, because it is one of the few physical activities that you can do where you cannot be scrutinized. The water protects you from the Male Gaze, and makes you free.

It struck me, in that first research and development session, with James the actor in that ridiculous bathing costume, that if you wanted to show the passage of time through the donning of various costumes, and you wanted to tell a story about the gradual liberation of the female spirit and the broadening of the female experience, then swimming and swimwear could be the way to do it. 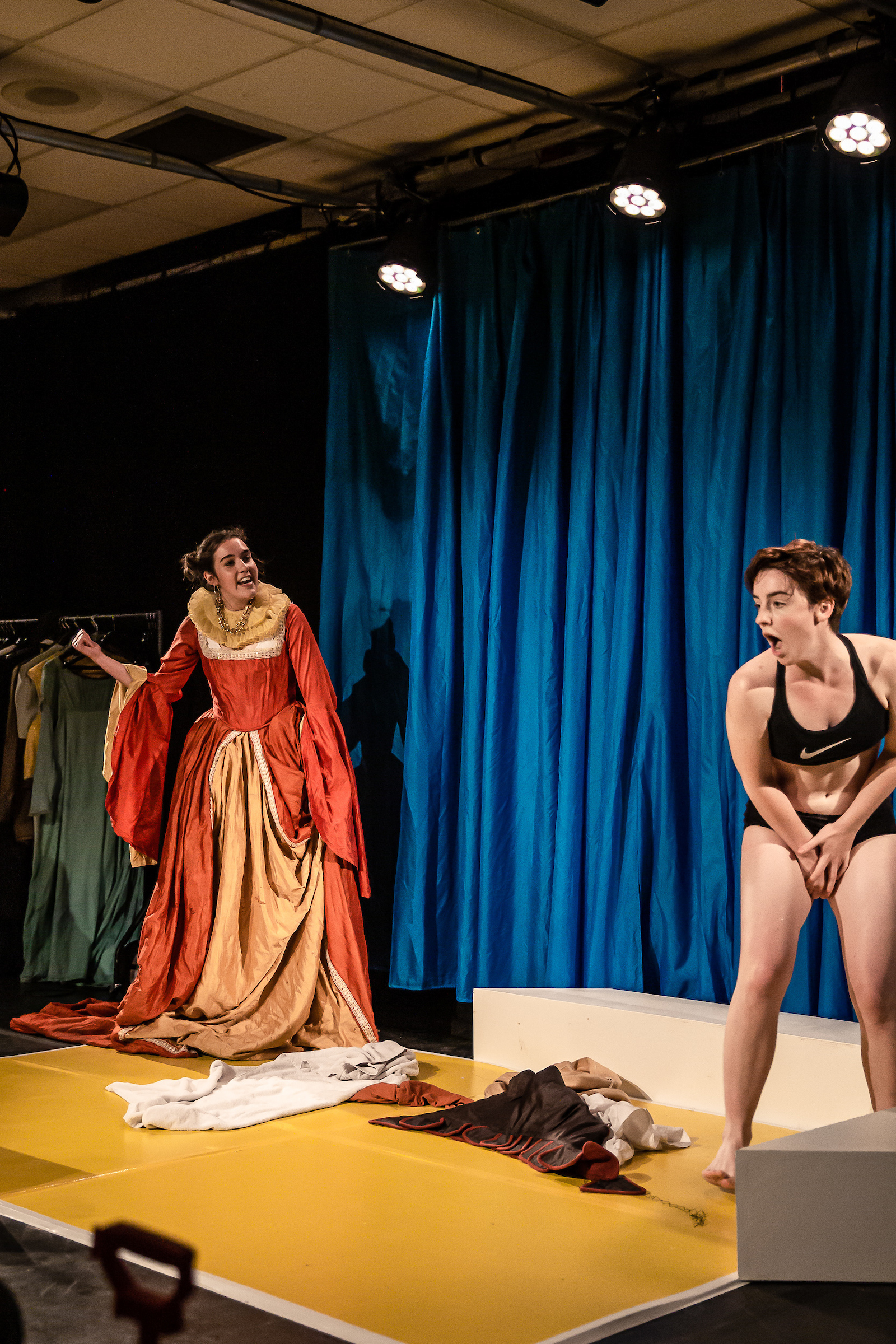 In terms of language, it was decided early on that the characters would retain some semblance of a modern sensibility. Cod-Renaissance speech would have been awful to listen to, and there is something especially, irresistibly joyous about someone in a doublet and hose talking about wanking.

In terms of how the play literally moves through time – well, this is where Julia and her particular brand of chaos comes in. Expect shouting, swearing, snacks, water pistols and pumping French pop music. This isn’t some delicate amble through the centuries. In Julia’s world, time travel is fucking hard.

“Wild Swimming is an interrogation of gender and privilege”: tell us more.
The privilege conversation came second to the wider discussion about gender. In the play Oscar aspires to be a ‘Great Poet’, and he wishes to emulate the people he studied at university. At the start of the play Nell has no such aspirations, but things change for her as time marches on. Poetry was a good route in here, because women have always written it: it’s the audience for this writing that has changed. It is also true, however, that not all women have always written it. For most of history it was a leisurely pastime, pursued by a privileged few. With this in mind, both Nell and Oscar were written as aristocrats.

One of the most satisfying things about the play, for me, was in making Nell extremely ‘woke’ and alive to the various indignities and restrictions of being a 16th- or 18th-century woman, and yet completely oblivious and casually contemptuous of her extraordinary privilege in other ways. Hopefully there is an underlying message in the play, which is that everyone has their blind-spots – and that this is okay. 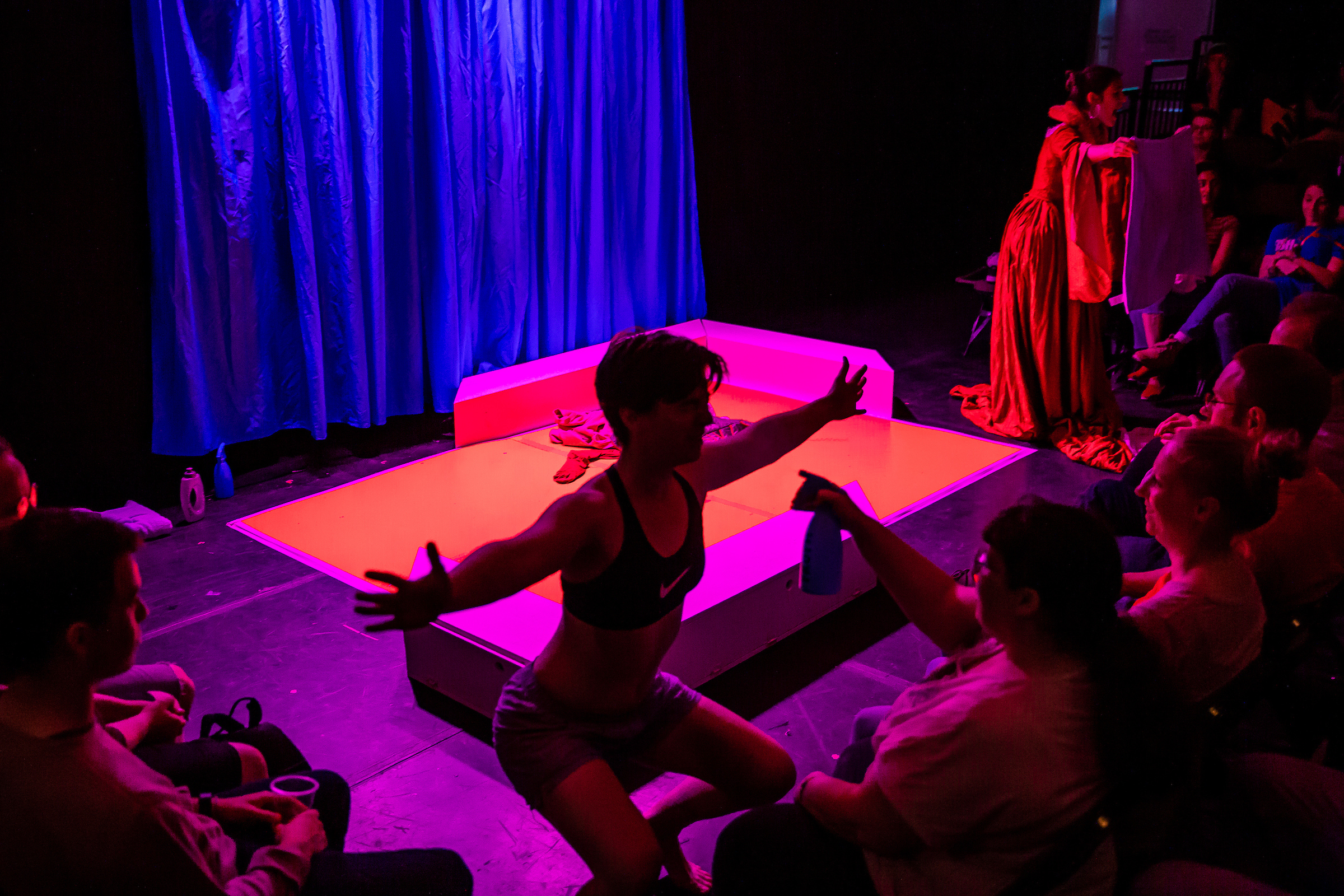 Why the name, Wild Swimming?
Apart from the ways in which swimming operates in the play as a metaphor for liberation and self-expression, I also thought there was something about the phrase ‘wild swimming’ – any swimming that takes place in the natural environment as opposed to a pool or lido – that conjured a sense of anarchy and mischief. The ways in which the characters negotiate and debate the rather thorny issues at the heart of the play could be considered a kind of ‘wild swimming’ – a somewhat murky, slightly dangerous, treacherously tidal progression from point A to point B, that is all the more invigorating and rewarding for the additional exertion.

Do you have a favourite among the various encounters, and why?
It was always mine and Julia’s intention that the play should, in some form or another, self-destruct. It seemed unacceptable that a play about the cis white male literary canon, and about cis white male privilege, written by a cis white male, could be allowed to tie itself up in a neat little bow. There are many ways in which the production seeks to disrupt and destroy the play, but (without giving too much away) the main way in which it does this is by, at one point, very definitively leaving the play behind. In this ten-minute window, anything goes.

Both Nell and Oscar are played by women – two incredible actors called Annabel Baldwin and Alice Lamb who are seriously sharp, and stunningly charismatic – by the time they refuse to keep going, the audience are with them completely. It’s a truly joyous moment of total anarchy, but my favourite ‘encounter’ is what follows in the wake of this destruction, where the two actors decide to accept whatever has happened, and resolve to finish the play. 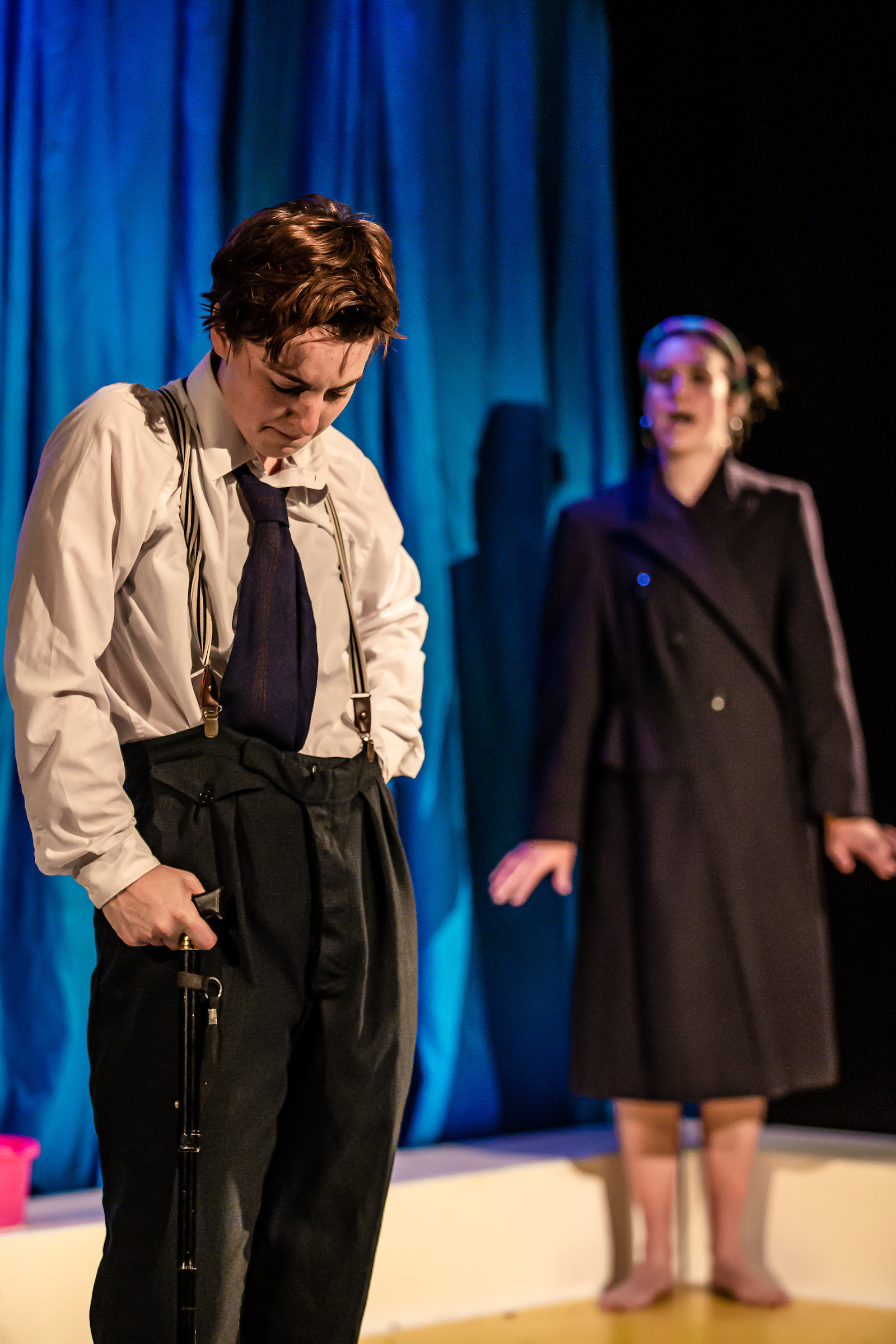 I feel very strongly that this is a play built on love. Without the love that Nell and Oscar have for each other, and that Alice and Annabel have for each other, it could be a really ugly, rather angry way to spend an hour. The final moments, where they half-arsedly attempt to ‘finish the play’, are always magical. Sometimes the play-as-written comes across as deeply felt. Other times it is nowhere to be found.

But this moment works because Alice and Annabel are always there, together, marking time and basking in the space that they’ve made. I would press any prospective punter to come for this moment alone. It’s so full of courage and wit and love. It’s got absolutely nothing to do with me and it’s glorious.

What do you hope to send audiences away thinking and feeling?
I think that’s up to them. It would be a pretty miserable experience to be making work with a series of set objectives in mind. Jules and I were curious about the issues that the play explores, and about how such a strong conceptual idea could be achieved. There are no easy answers to the questions that are raised, but I think the play suggests that perhaps we might all come to a little more understanding if we were more loving, more patient, more generous and more compassionate. If I had any kind of lofty and high-minded goals then I would hope a few people come out with a little more love in them, and a little more room to forgive. I’d be very happy with that.