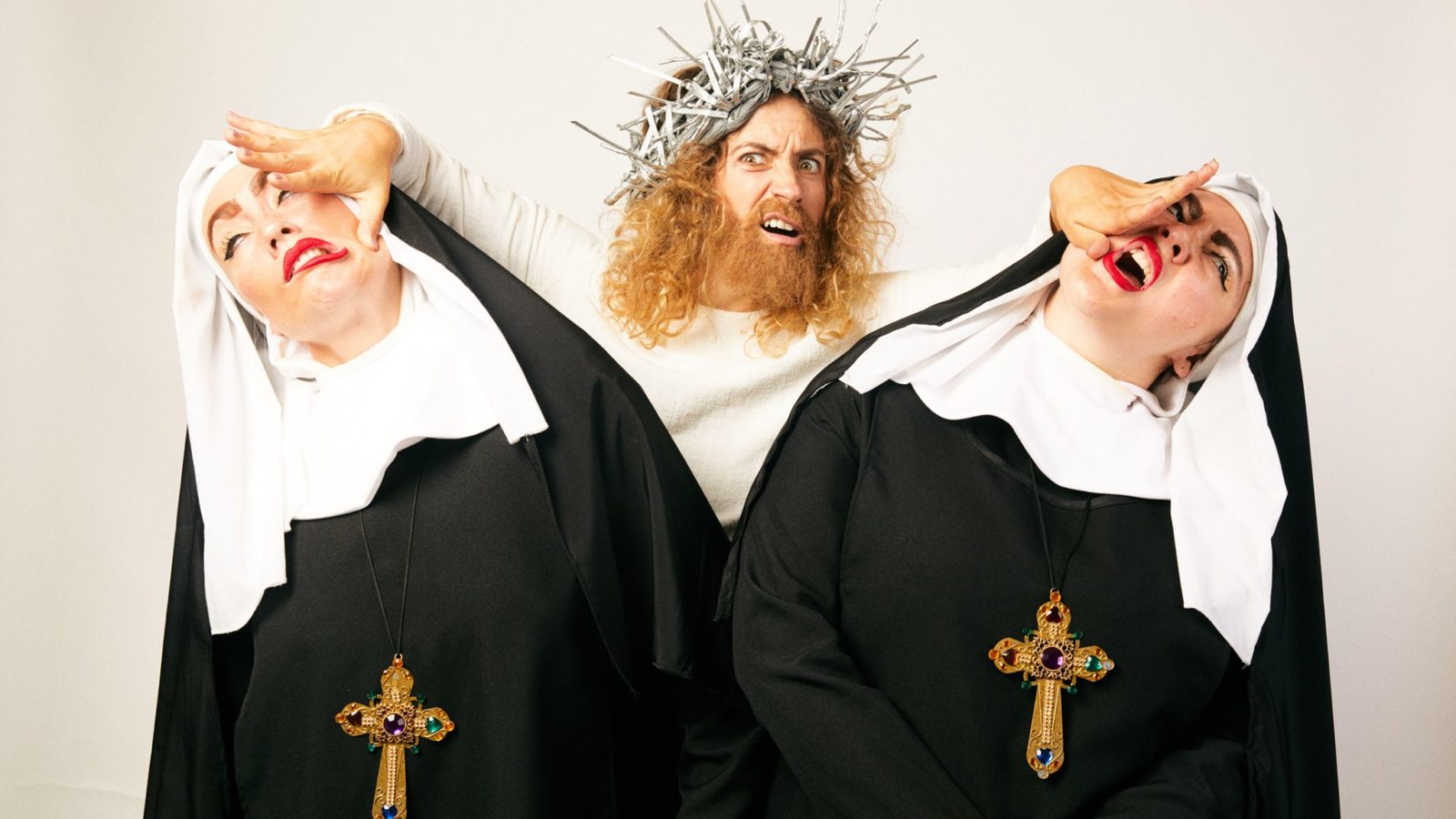 Tell us the Shesus and the Sisters story so far. How did you come together, why do you do what you do?
Well, for starters, 2/3 of us are twin sisters (you guess which ones), so that started in the womb.

Then the three of us found each other at Green Man Festival about 800 years ago. After hitting it off, we started playing all sorts of different comedy and theatre characters together for very small amounts of money and, eventually, SATS (our sexy acronym) came into this dimension at Secret Garden Party about four years ago.

We then entered a drag king competition and for some unknown reason we didn’t win but a lot of opportunities came from this. People just seemed to like SATS more than anything we’d done before, so we kept doing it despite our better judgment.

What’s your take on religion?
We were all brought up with Christianity in our lives. We all now have separate experiences of spirituality and belief systems, ranging from total non-believer to fully prescribing to Jesus Christ as an avatar for good.

Religion can be a force for good or bad, but there are aspects of communion, community and a place to connect to the spiritual nature of yourself which we totally see as needed, and it is these ideas that we play with in our shows. People often assume we just just make ‘second coming’ jokes, but we don’t. 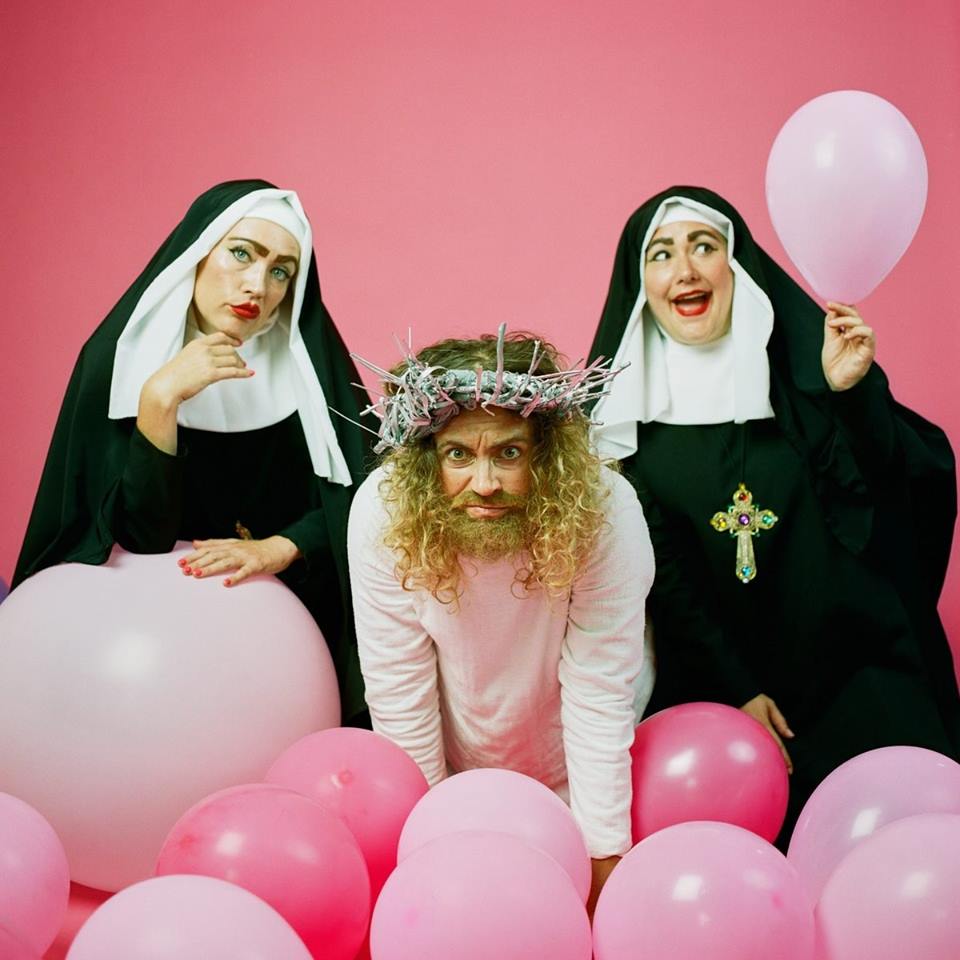 Are there any demographics whom you wouldn’t advise to see your show?
The characters we play are archetypes which carry the content of the show, which ultimately is much more important than the outfits we put on. The message throughout the shows is always one of love and oneness.

We look at religion and theatre through a feminine lens (not enough space here to explain that right now!) and we would encourage anyone to come and see us, even if it feels out of their box. A vicar has seen the show (left with a smile on his face) and we have officiated an Irish catholic wedding.

You have a bit of a (fond?) laugh at religion. yet I think you want your show to have a similar effect on audiences that religion can: a kind of catharsis. Yes?
In our shows we and the audience sing, dance, talk to each other, reveal our truths, go on a communal journey, we die, are reborn and end on a euphoric high, all shamelessly accompanied by cheesy pop – all things you might find in a church or place of worship. Here is a quote from someone who has been to our shows: “As someone who spent many many years in evangelical church in a previous life (until I was excluded), having SATS as my new Easter and Xmas tradition and ritual for the past few years has been a glorious thing. I feel included and safe… allowed to be my queer, feminist, binary-challenging silly self. (…) There is genuine powerful stuff and spirituality nestled within these joyful shows. I’ve spent a lot of time with Jesus and I truly believe he would love Shesus and the Sisters’.” 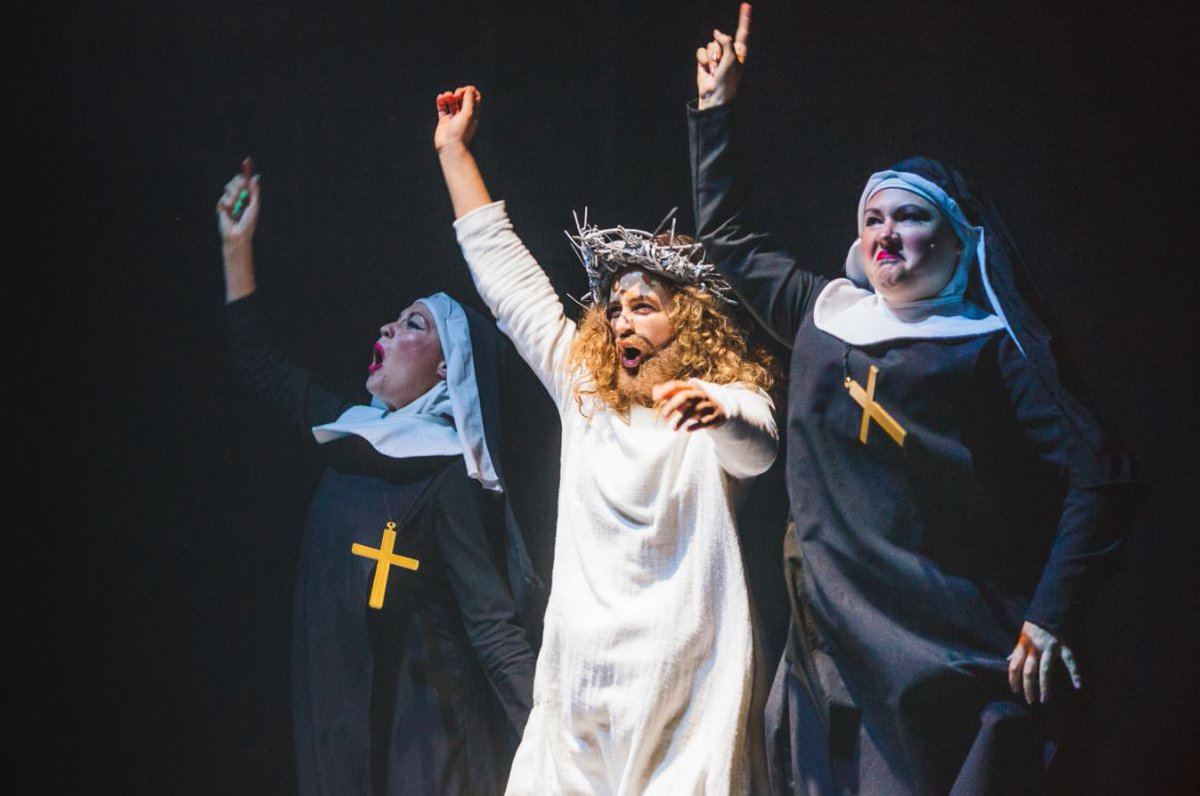 Tell us about Self-Service: A Resurrection Story. What can audiences expect? Is the show equal parts music, comedy, sketches? Or a slightly different mix?
Honestly, we’re not good enough at dancing to be called dancers, most of us can’t sing so we aren’t really singers and we don’t tell jokes so you can’t quite call us comedy – but, we do all these things with gusto and like our lives depend on it.

We play with the audience, we improvise and we take everyone on a journey. We are witches and we listen to the room as a trio in our own ways and create with whatever comes in our direction. No two shows are the same and you can expect to be cleansed from your earholes to your arseholes.

Lots of our readers will have seen you last Christmas. How much does this show differ?
It’s the same, just less tinsel. No, it’s totally different and we think it’s A LOT BETTER.

“Having performed at The National Theatre’s Riverstage, where they were heckled with flying sushi” – care to tell us more?
We think it was probably the remainder of a salmon and avocado ngiri roll. It splattered quite far, hitting two of us and there is video evidence online. The heckler was removed by security. It was probably the most middle-class heckle ever – and food was wasted, so that’s a shame.

Sister Pauline Hollywood on Sister Mary Berry
I wish she’d make more decisions but I know it’s hard with her agonising anxiety. I love her cheeks.

Sister Mary Berry  Sister Pauline Hollywood
She hugs me too much but I am jealous of her eyebrows – sharp as knives.

Sister Pauline Hollywood on Shesus
I really like her bunions, cos they make me feel better about my feet. They do a well annoying thing with their legs in bed.

Sister Mary Berry on Shesus
I wish they’d look at me like they look at Sister Pauline. Shesus is the best hipster in East London.

Shesus on Sister Mary Berry
I wish she’d shut the fuck up once in a while and I really like her singing.

Shesus on Sister Pauline Hollywood
She’s a twin and I hate twins but she’s a fearless mother-bitch.

How do you hope to send audiences away feeling after one of your shows?
Knackered and ready for bed.

Shesus and the Sisters return to Tobacco Factory Theatres with Self Service: A Resurrection Story from Sept 29-30. For more info, visit www.tobaccofactorytheatres.com/shows/self-service-a-resurrection-story