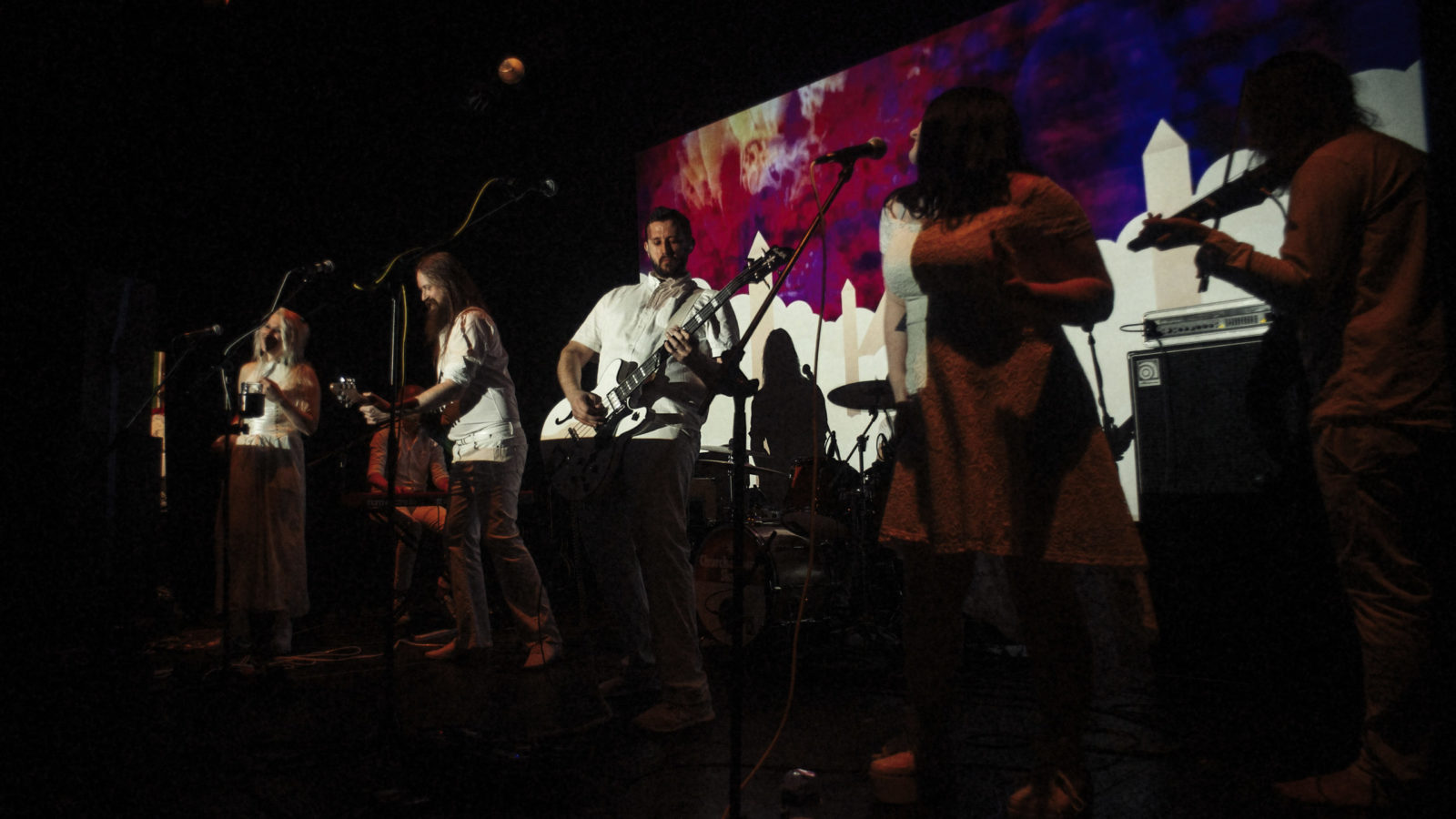 Euphoric, Adjective [yoo-fawr-ik, -for-]: intensely happy or confident, for example “the audience at The Cube was euphoric after Church of the Cosmic Skull blew the roof of the place”. The seven piece performed sixteen or so songs that somehow combined Beach Boys harmonies & righteous gospel power; Iommi sized riffs & fluid May solos; sanctified organ & progtastic synths all topped & tailed with pop nous not seen since Fältskog, Ulvaeus, Andersson, and Lyngstad (aka FUAL) owned the charts. And bugger me backwards, was the rhythm section tight, massive, nimble and funky or what? 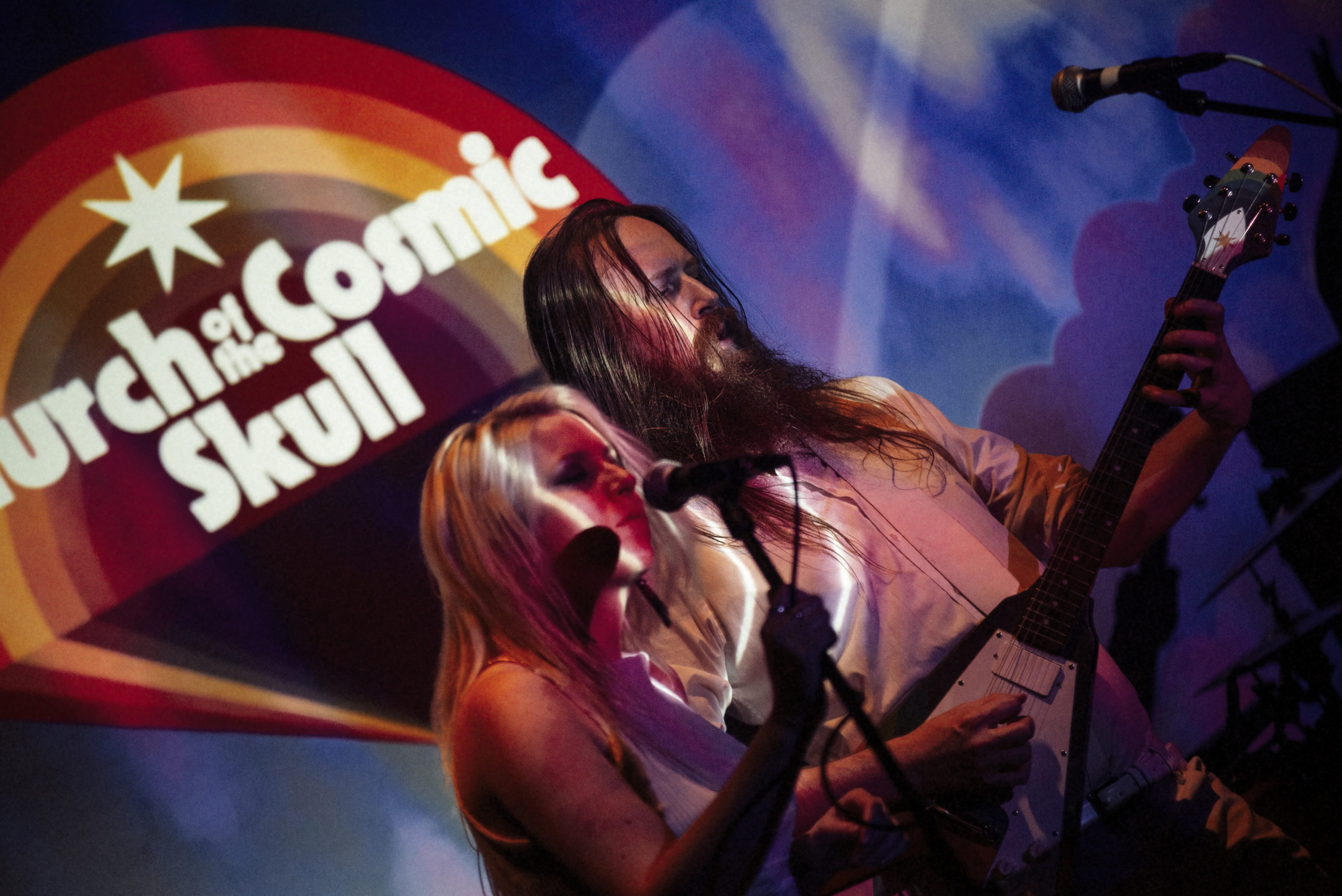 Oh, and if all the above wasn’t enough to conjure up something irresistibly unique, the barefoot violin dancing all over the tunes was ethereal and psychedelic, yet playful and popalicious (ELO meets Hawkwind anyone?). 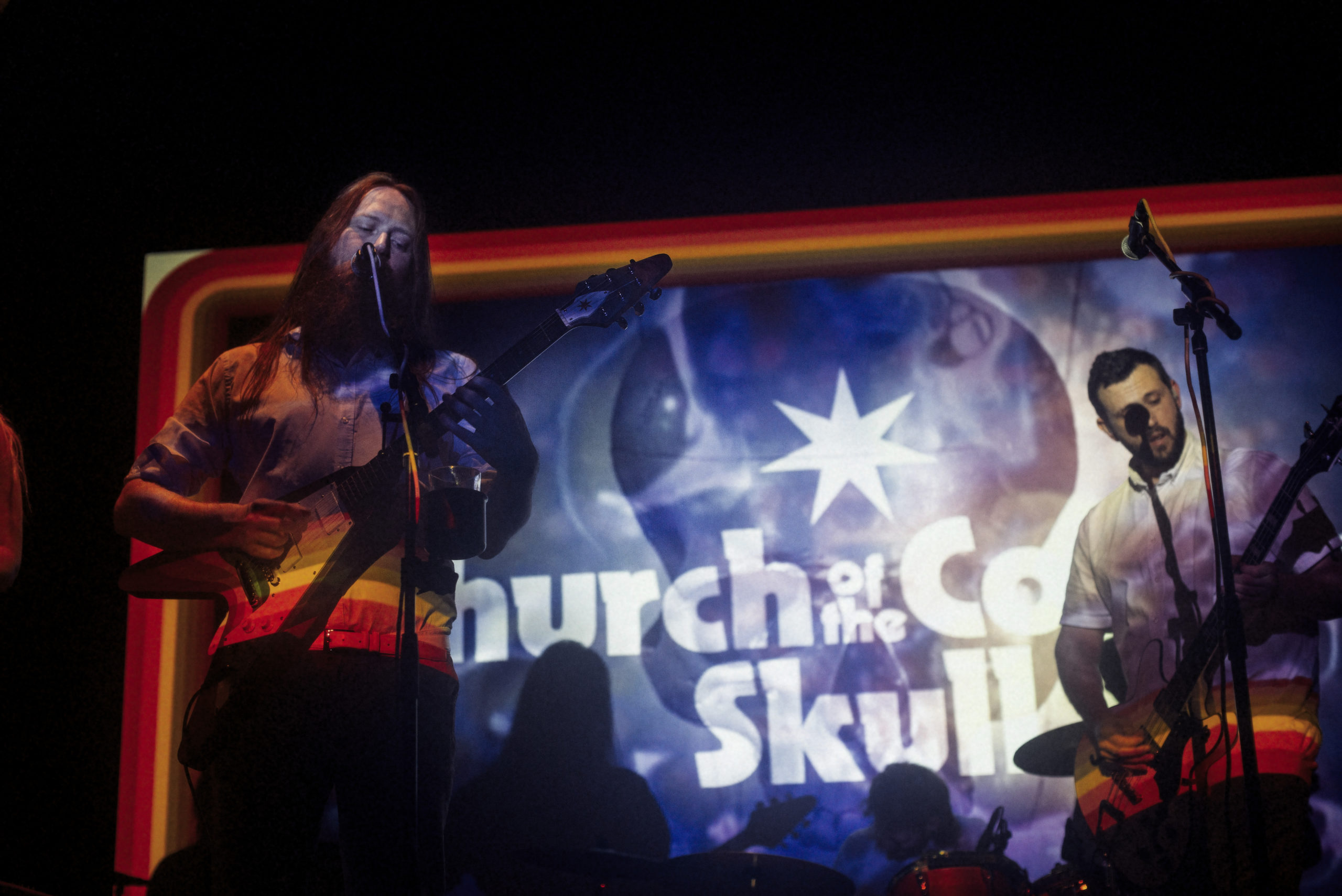 Church of the Cosmic Skull are the brainchild of one Brother Bill (Withers), ably assisted by sisters Joanne and Caroline along with brothers Michael, Joe, Sam and Laurence. They’ve just released their third LP Everybody’s Going to Die and sold out the Cube. They’re a band whose live sets simply make you glad to be alive. Nothing more, nothing less. 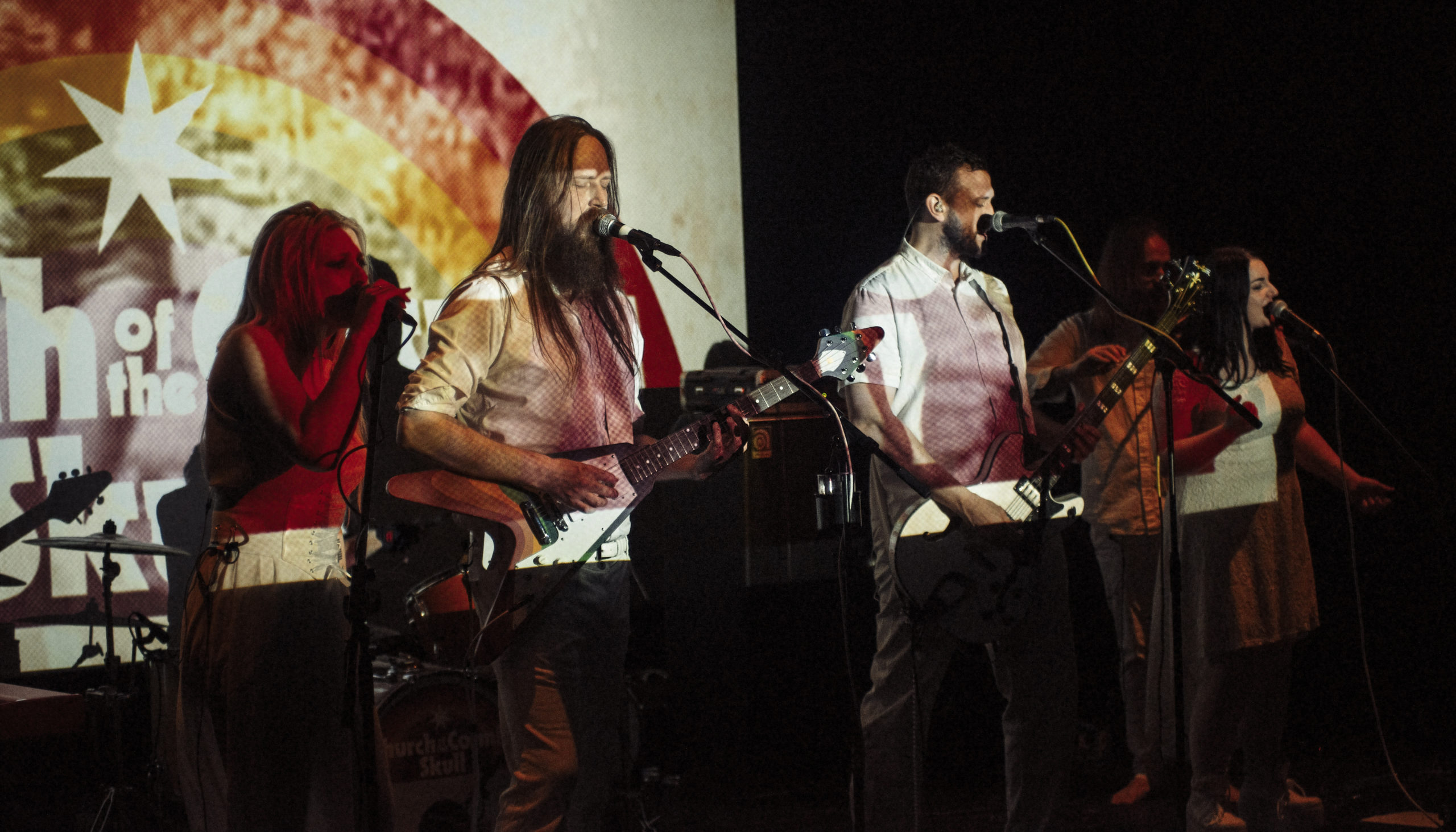 Random observations: if this was the seventies, CotCS would be regulars on Top of the Pops and selling out arenas. Do What You Want (With Love in Your Heart) proved you can marry Queen meets Focus segments with breakneck thrash metal instrumental passages to create speed-prog. The stalking riff of Watch it Grow was complimented perfectly by the prowling bass and neither scared off the gorgeously complex pop harmonies. Black Slug was every bit as menacingly bonkers as you’d hope and yet lifted out of the abyss by sweet, fabulous vocals. 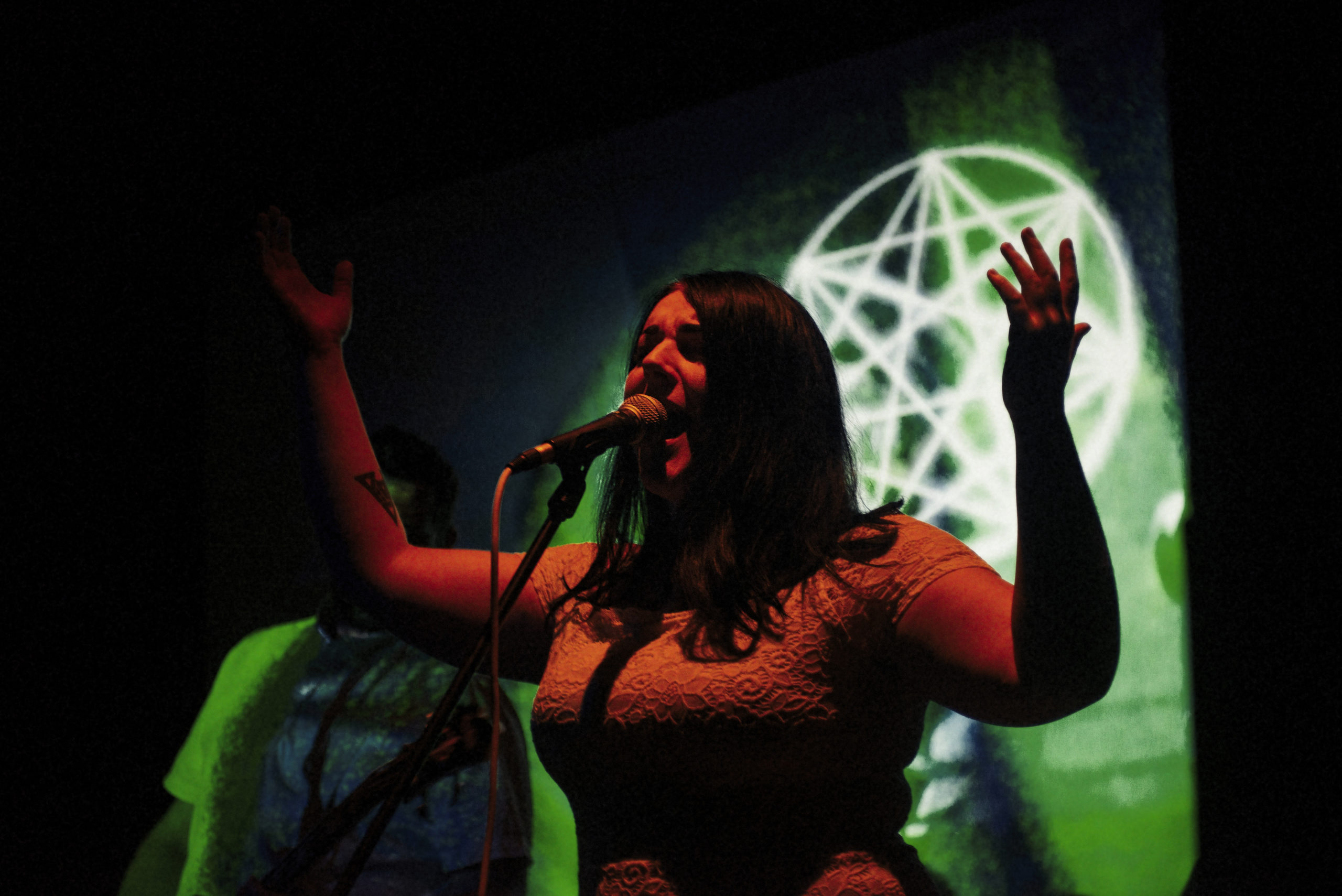 By the way, the whole ethos of the band is delightfully captivating – go to the website and enter once you’ve observed the 7 objects, it’s a fun wormhole and a real antidote to many bands’ dull / earnest / too-cool-for-school / predictable / all of the above websites. Especially if you make the eminently sensible decision to take the ten-stage initiation program and join the inner sanctum. And whilst they’re playful about being a cult, they’re more likely to buy you a pint than try and persuade you to drink the Kool-Aid… 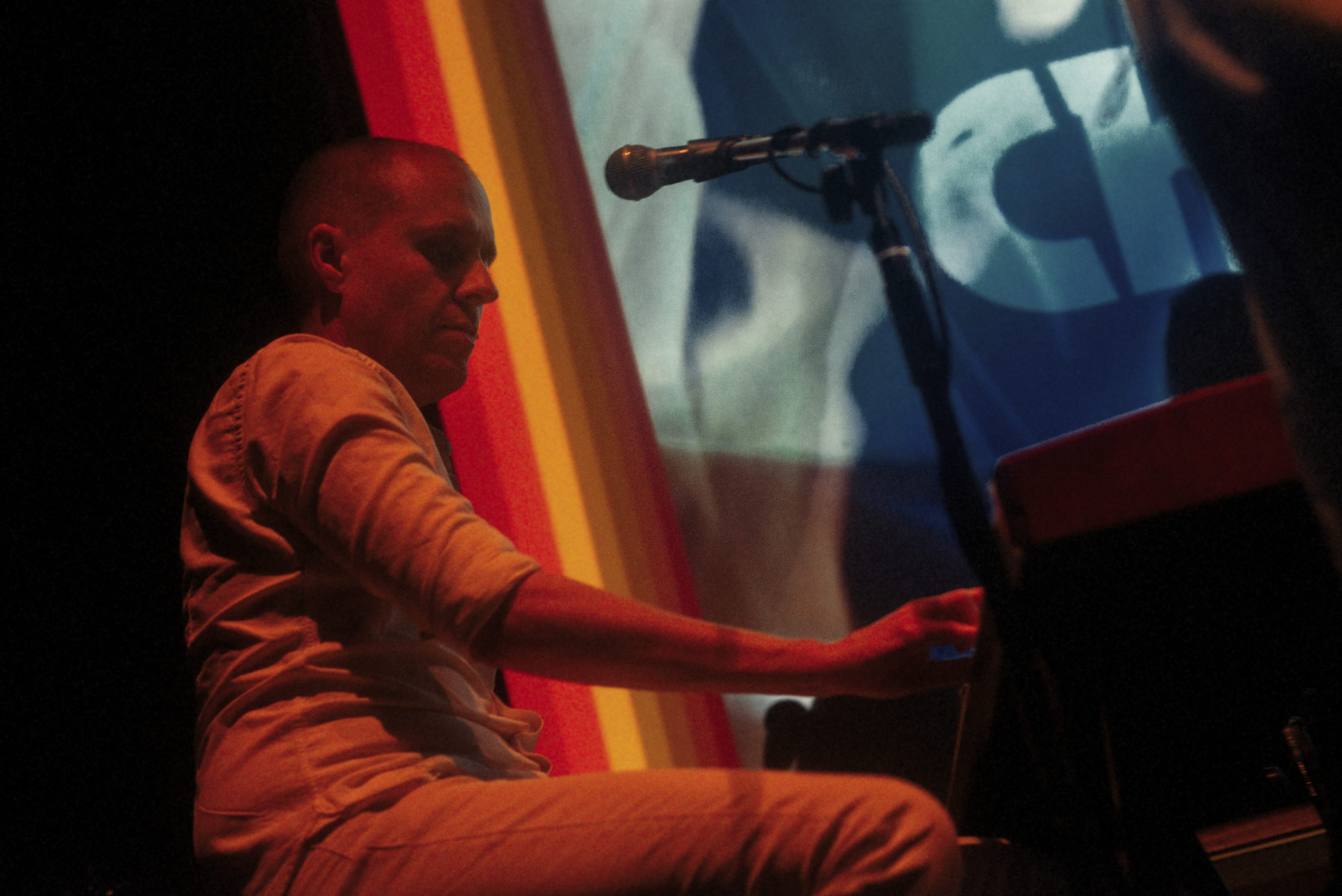 More random observations: The set list was excellent, a nigh on perfect mix of cuts from their oeuvre but surely including The Cards That You’re Playing would have made it perfect? Everybody’s Going to Die was simply joyful. A totally immersive and triumphant communal acknowledgement of our mortality, crowd and band singing with such gusto that, for the duration of the song, death was not to be feared rather just accepted with equanimity. Surely Don’t You Believe in Magic was a massive, massive hit in 1974? And Sorcery & Sabotage in 1975? 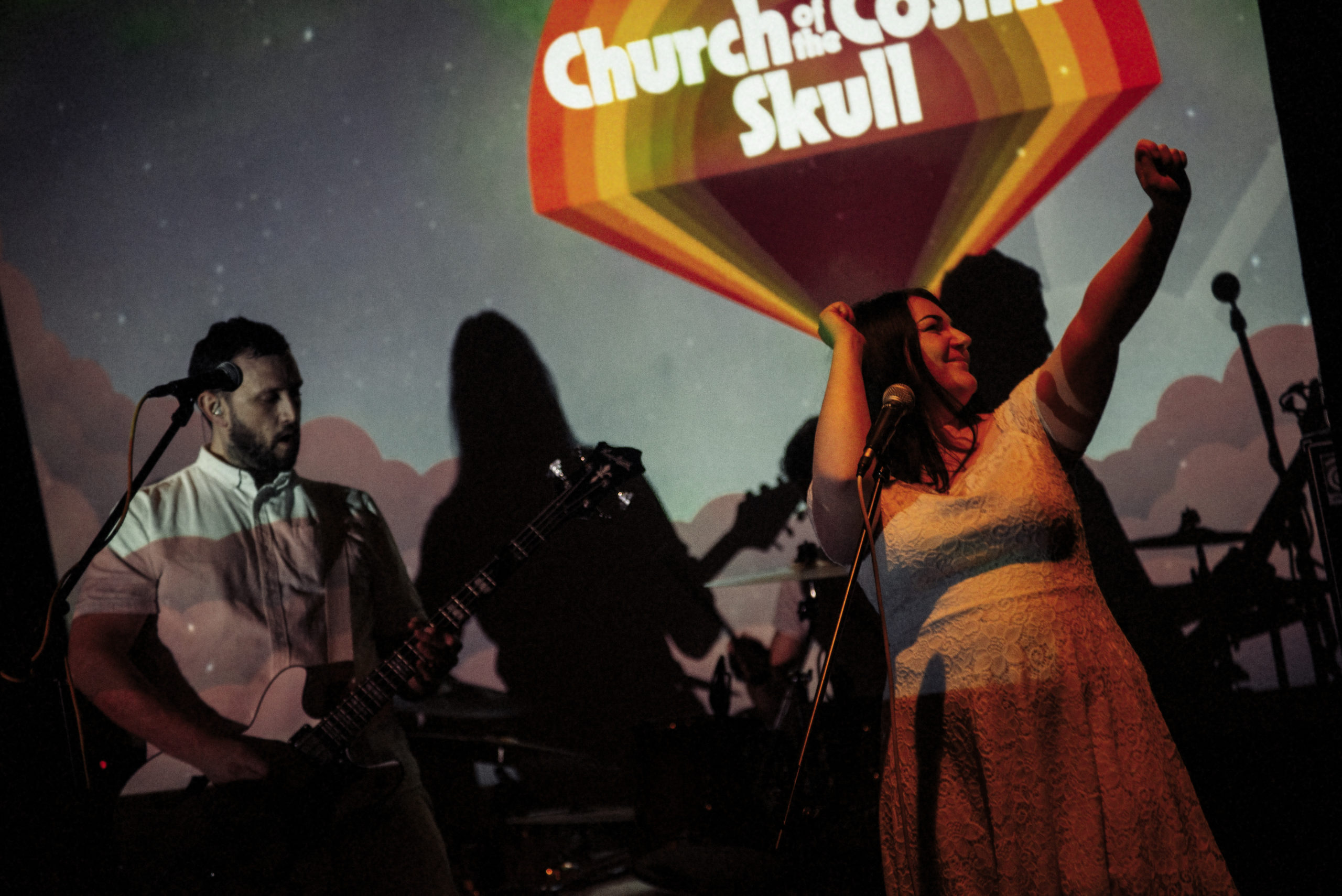 Of course, you can only pull off a melange of styles, structures and genre mashups if you’ve got the chops to do so. CotCS have got the chops. Yet their proficiency wasn’t the driving force of the set: skills in service of the songs, and less is more whenever necessary. Although they weren’t afraid of complexity and eschewing the obvious. Yet all driven by their pop sensibility. 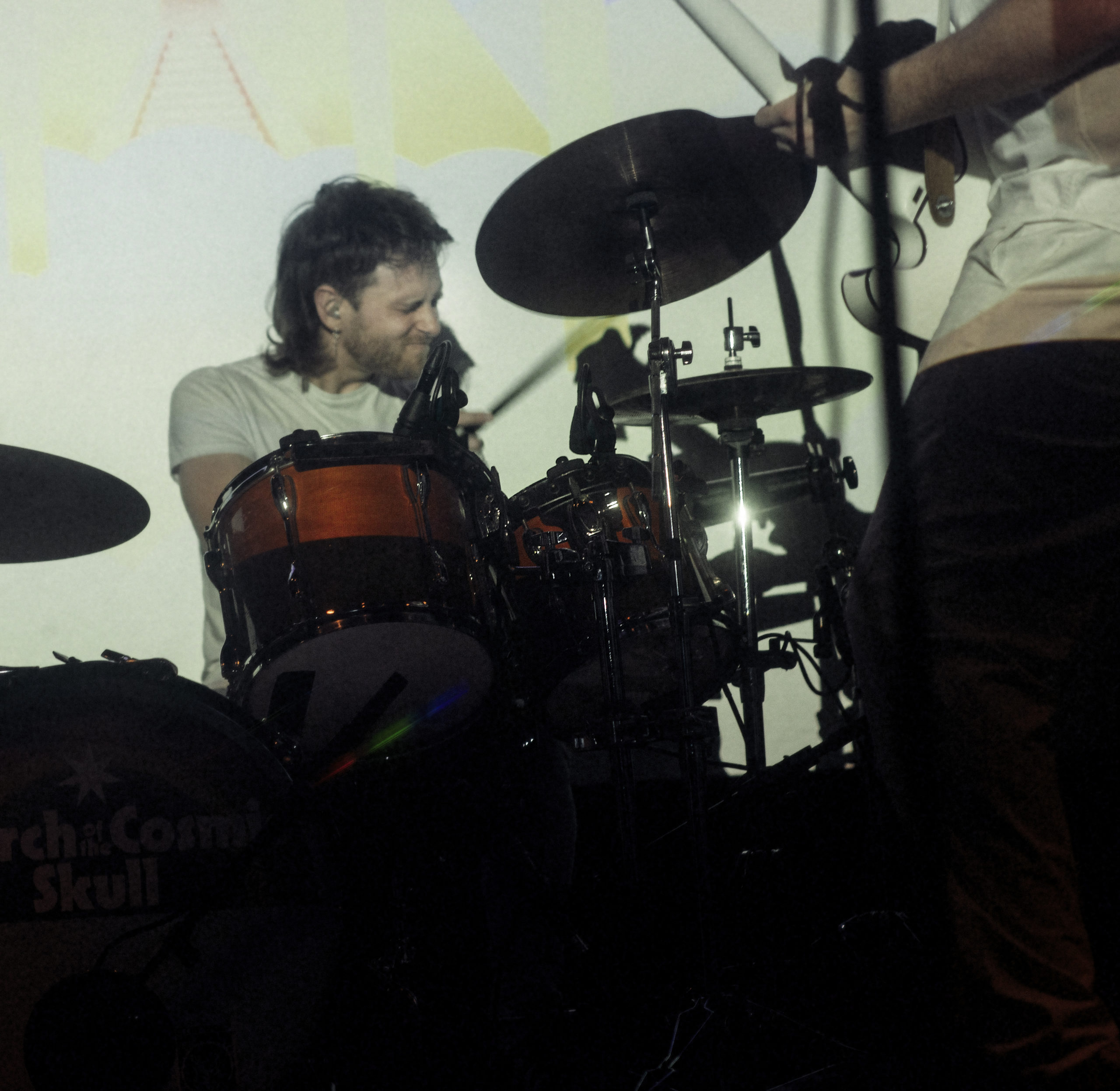 Final random observations: Plenty of the tunes were more than suitable for cutting a rug, Cold Sweat the perfect exemplar: another fantastic vocal arrangement sandwiched between irresistibly danceable boogie bookends. A celebratory and extended Revolution Comes with an Act of Love is the closest the band gets to a “political” lyric and was the perfect climax to a set packed with pinnacles and crescendos. The band are lovely people: all seven hovering around the merch or at the bar or sat in the performance area chatting, signing stuff, selling merch and generally being thoroughly approachable, pleasant and sincere in their interactions. 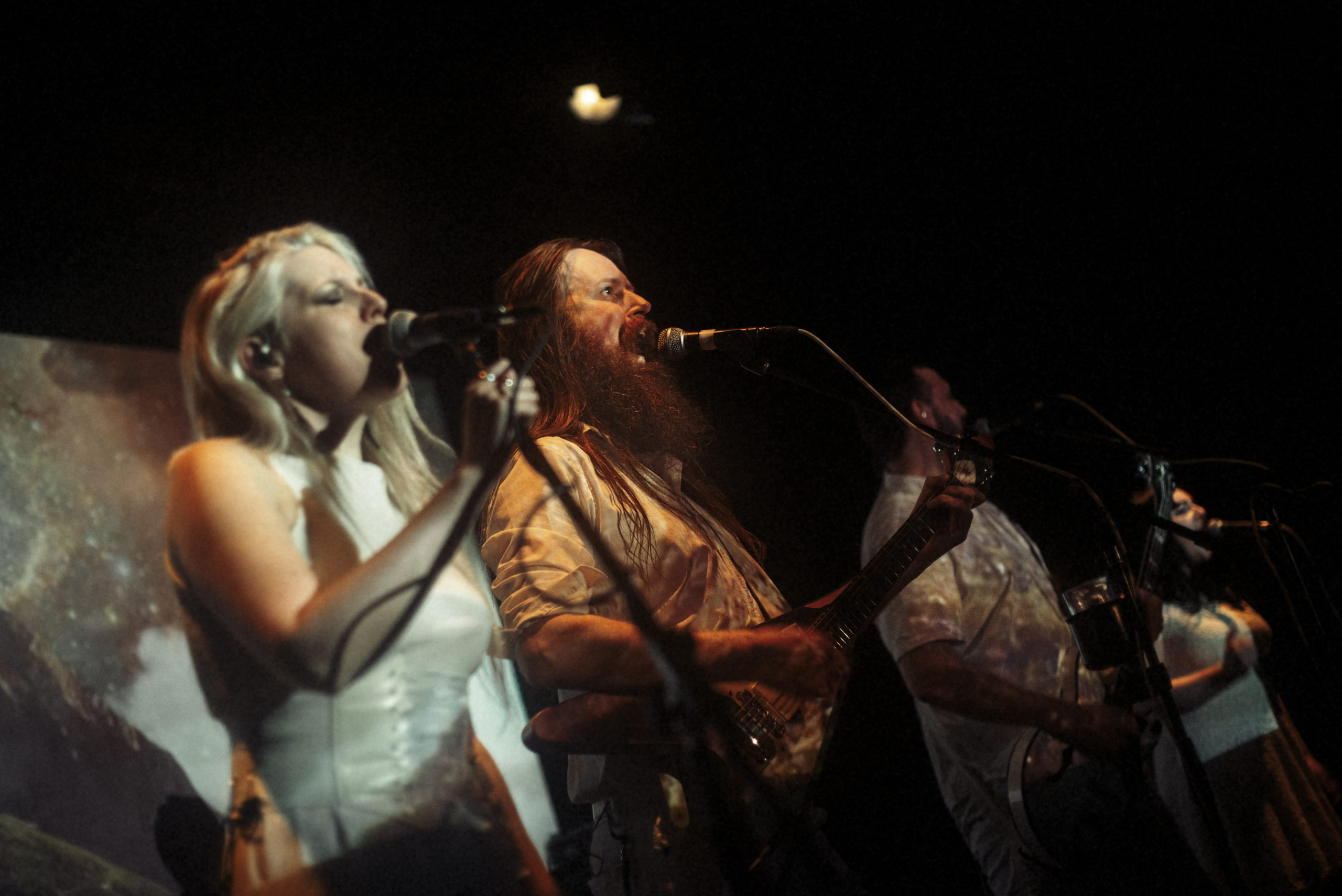 We’re living in troubled times, this much is true. CotCS are not sound tracking these times nor are they providing rallying calls to inspire rebellion and the fight back. But what they are doing is equally as important. They are marrying a myriad of disparate influences, sounds and genre tropes in to truly uplifting and inspiring set of songs that cannot help but fortify us all. Come join the congregation. 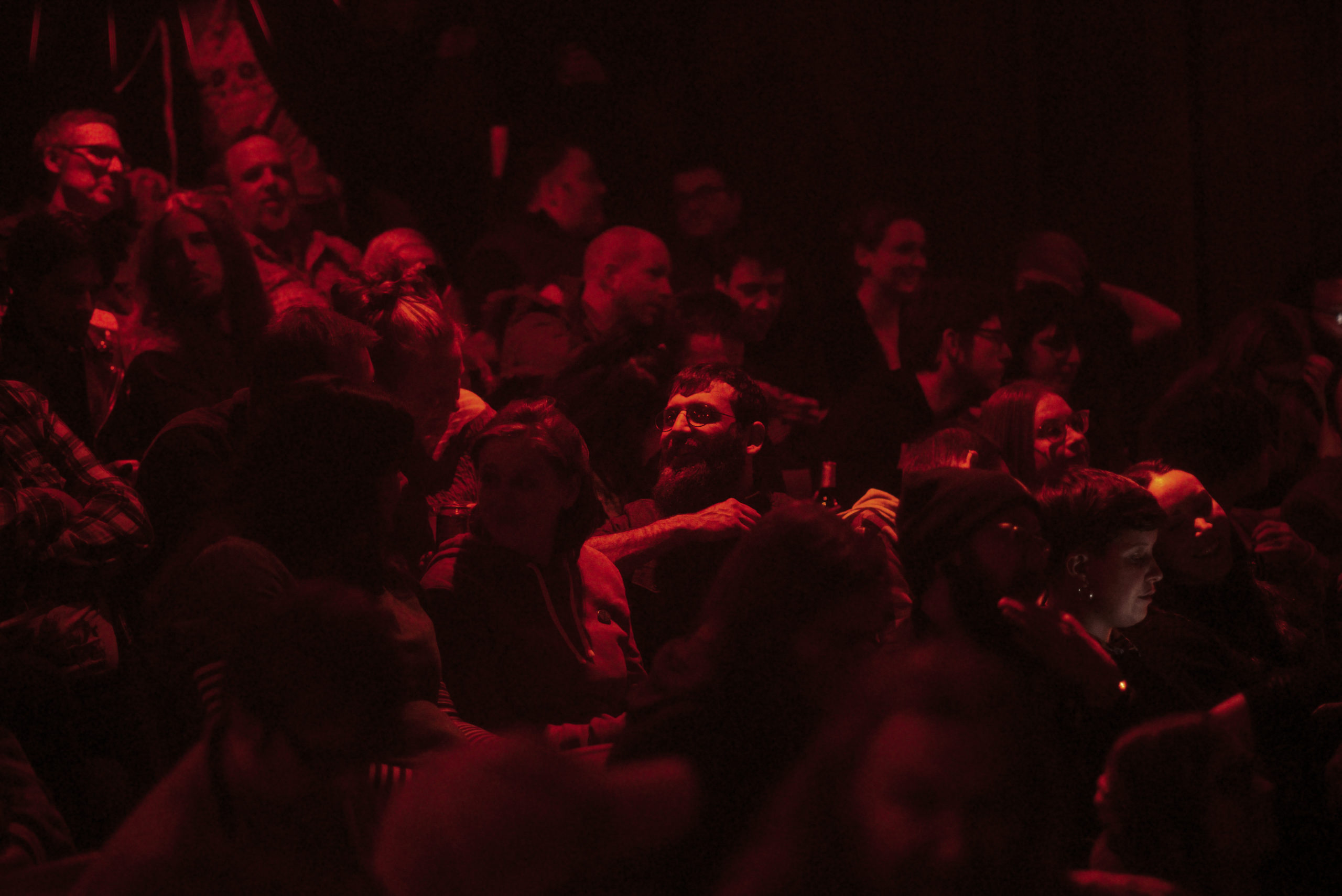 The Church of the Cosmic Skull: The Cube: Wednesday, 19 February 2020

All pix by Marcus Way