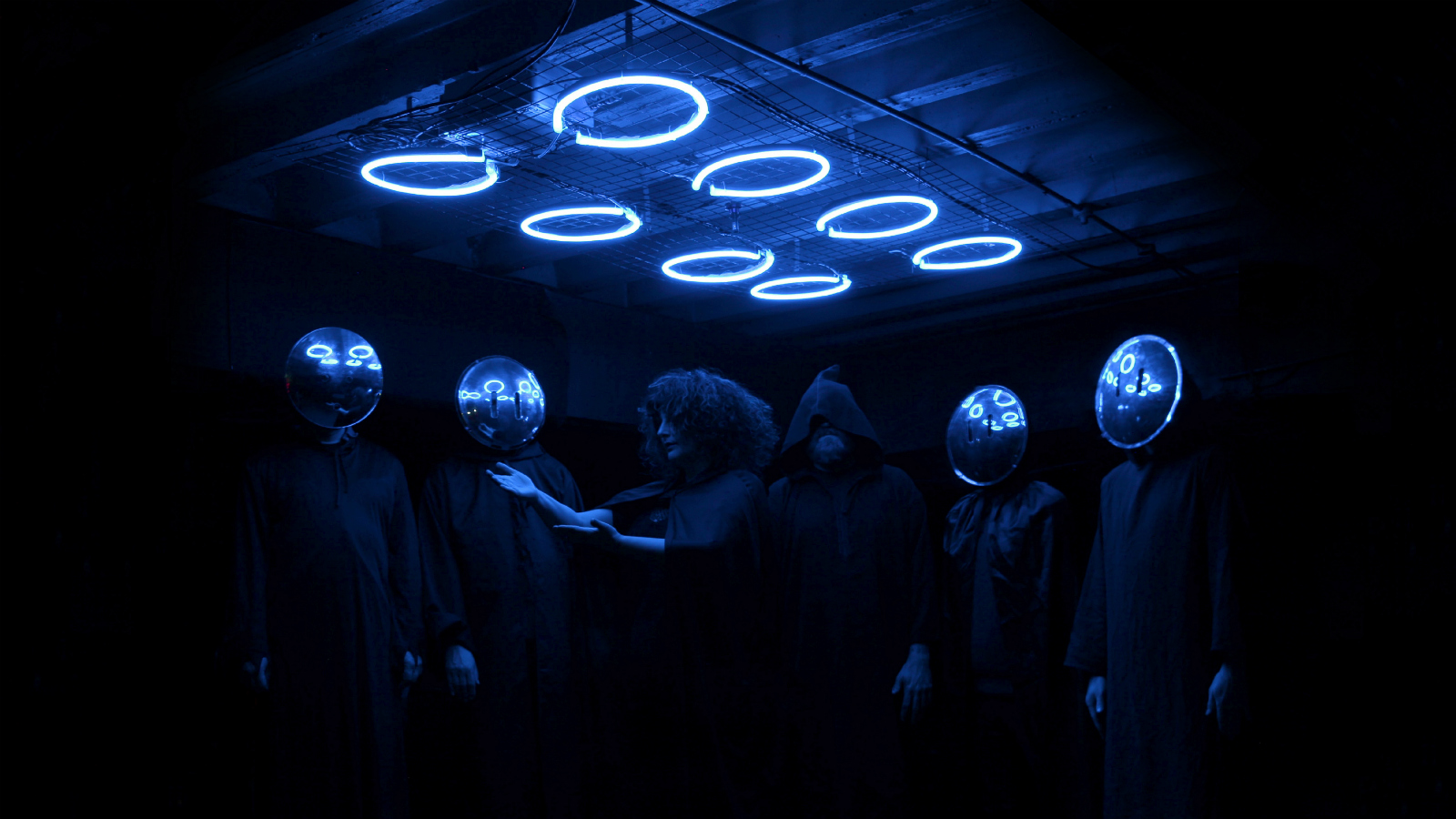 You enter a biosphere with a babbling brook and rolling English meadows and hear what almost sounds like a spidery madrigal, a plaintive voice “Flow my tears…flow my tears….” strong and clear and yet with an undeniable tinge of melancholy.

Leaving the biosphere you’re plunged into darker realms, the otherworldliness has transmuted to base menace, there’s something just of sight, lurking at the corner of your eye, not willing to show itself until…until the time is right.

Quickening your pace, you burst through the doors ahead to find yourself in a courtyard surrounded by Moorish buildings with the sun setting behind the minarets. The dervishes and djinn are dancing, but in slow motion, and you’re compelled to join them until the music ceases, leaving you off kilter – not disturbed but dishevelled and disorientated as the musicians leave the stage.

Dead Space Chamber Music played four pieces of music – Food for the Moon (an improvisation); Flow My Tears (a John Dowland adaptation); Screaming Veils (an improvisation) and Je Vivroie Liement (a reworking of a Machaut composition). The music was executed in near dark and Tom Bush, Liz Muir and Ellen Southern delivered the performance with classy, understated aplomb.

Bush’s guitar was treated throughout and mostly the source of great swathes of ambience rather than solos or riffs (but there was some welcome heft in Je Vivroie Liement); Muir’s cello was both treated and au naturel, forming the bedrock for the pieces, dragging the sci-fi sounds back to the Gothic. All three musicians worked pedals and shakers both individually and in tandem to dress the soundscapes with misheard noises, unearthly transmissions and sonic emissions.

This was a confident, challenging and satisfying suite of work, the four pieces seguing seamlessly as a collective piece of music and Dead Space Chamber Music are a band that will reward your attention in ways you never thought possible.

Mildred Maude were beset with technical problems, a gremlin seemingly undoing their good work in setting up and sound checking (and the little fucker didn’t quit either as it also gifted them a punctured tyre). They graciously truncated their set to allow the headliners their full allocation.

The Cornish extemporisers stretched out over a twenty minute or so improvisation that contrasted with, yet complimented, the opening set. The urgent Krautrock metronomic drumming (with some tasty fills reminiscent of the Hawkwind double drummer line up circa mid 70s) and throbbing, pulsing almost-funk bass were hypnotic and rather than inspiring flights of cinematic fantasy pushed the listener towards a trance.

However, the guitar work prevented full immersion in any kind of deep trance: non-solo solos; fluid, melodious lines. Riffs were teased and toyed with, the axe manipulated, flung around, and gently but firmly abused for all manner of feedback. But rather than screeching feedback, ambient wobbly Neu sounds and a Cluster of avant-garde noises.

Given the band often play for an hour and a half the shortened set arguably stopped them hitting their stride; tonight’s sense of urgency did not suit the grooves they’re clearly capable of building. But karma rewards and their generous behaviour should certainly be repaid.

Taking to the stage in floor length cloaks and with faces obscured by mirrored discs (echoing the debut LP cover) Bonnacons of Doom played Industria, Rhizome, Solus, Sutcliffe, Argenta and Plantae: essentially said debut album, albeit out of sequence and with the bonus of Sutcliffe. They did not perform an encore yet left the audience in that bittersweet state of simultaneous delight and disappointment.

Like a brooding avalanche slowly gaining momentum the set opened with a drone that gradually grew louder as a gong incessantly summoned the musicians to the stage. And then the avalanche commenced, pounding the room exquisitely. Industria was a menacing slice of Tibetan metal, chanting and building ominously without ever truly reaching a crescendo. Rhizome, with extra floor tom power, was that crescendo: a massive crescendo disguised as a cymbal splashed drumming tour de force, a riff monster. It battered the crowd, paving the way for the storm to come.

Solus, Sutcliffe and Argenta were a relentless display of power and ingenuity – music as heavy as metal but not heavy metal – eschewing all the conventions of rock to twist base metal into something harder, something different. Solus led with vocals that disturbed and soothed in equal measures over diamond hard riffs and off kilter solos. Argenta teased us with its soothing introduction, peaking with towering riffs and dipping with soothing noodling (not a pejorative), which ebbed and flowed.

And was that a trombone lurking stage right?

Bonnacons of Doom, like many of their label mates on Rocket Recordings, are sonic alchemists creating a new music from simple ingredients, redefining what can be done with the most basic of concepts (people with drums, basses and guitars turned up to 11 and decorated with all manner of samples, found sounds and twisted effects). Creating a new heavy, psychedelic sound that fits our current times like a paisley shirt fitted the sixties.

Oh, a bonnacon? A bull like creature of medieval legend with inward-curving horns and a horse-like mane. Any fool know inward horns are useless for self-defence, so the beast would expel large amounts of caustic faeces, burning its enemies and thereby ensuring its survival.

All pix by Andrew Ellis